Playing with pinhole panoramas with a parabolic image plane 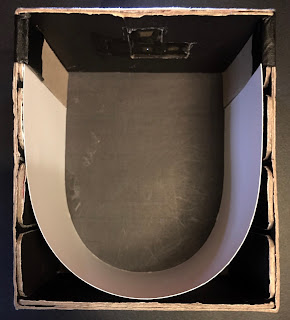 I’m usually not interested in curved image planes mostly because I think the barrel distortion of horizontal lines dominates the composition. They all seem to look sort of the same to me. I know if you have a level horizon in a landscape image, it can be almost unnoticeable but that’s a pretty limited case.

It is the one thing that you can do with a pinhole that you can’t do with a lens. The normal attraction of curved film planes is to achieve extremely wide angles without the overwhelming vignetting inherent in very short distances to the pinhole with a flat image plane. To accomplish this, curved cameras are usually designed with an arc of uniform radius so that the pinhole remains exactly the same distance to the image plane, hence the f ratio is uniform across the field.

With the Pinhole Lab Camera, it’s possible to use a piece of paper 10 inches long that, when attached to back of the camera, creates a curve that almost extends to the front of the camera with the distance from the pinhole varying from 120mm to 60mm. (I know it’s not exactly a parabola but I couldn’t resist the alliteration.)

In the center, with a .55mm pinhole, it’s f231. By the time you’re at the front, it’s f109, a four stop difference. Something that modifies this is that in the center, the pinhole is circular from the point of view of the film, but by the time you get to the edge, it’s rather foreshortened into a narrow ellipse. Since what determines exposure is the area of the aperture, it should be passing less light to the film. Would those things cancel out?

I started out with a scene that I thought would have pretty uniform exposure, the little alley in the back of the Frontenac Flats. The levels of this scan have been adjusted to achieve the full range but otherwise there’s no burning or dodging. It does look like the exposure is pretty even across the frame.

Another unique characteristic of this configuration is that in the center of the image, at 120mm from the pinhole, the vertical angle of view is 28 degrees, but where it’s only 60mm from the pinhole it would be 57 degrees. I wondered how it would render something like a narrow courtyard where the back wall would be farther away but the sides would be close to the camera. In the narrow passage in the image above, it makes it look like the sides have been folded away from the camera by some giant. In this one of the wider courtyard behind the Beech building it’s less noticeable.

Sage Hall at the University was built to maximize daylighting to save energy. One feature used to accomplish this is the office wing on the south side has a concave curve to maximize the amount of time the sun shines directly into the windows.  Looks like it’s no match for the curved film plane and the expansion of the angle toward the edges. It looks like it’s curved away from the camera. Incidentally, this was done with the rising pinhole.

Across campus the colonnade in front of Horizon Village has a similar curve but facing more toward the west. The sun would have been shining on the pinhole at this time of day so I gave it a pass. As I got back on my bicycle, I was taken by the view down the curved pathway. This is one of those cases where the curved film plane is almost unnoticeable .

The courtyard in front of the atrium at City Center has trees which hide the corners and it’s hardly apparent that the side walls extend toward the camera.

How about pointing directly into one of those corners? I’m pretty sure the guy at the left had no idea his legs were in the scene. He told me he hadn't seen anyone use "one of those cameras" for a long time. When he was in high school, he knew several people who did in the tiny rural town he was from.

It’s been a while since I used paper to take photographs and I’ve been a little frustrated at how high contrast is it when I tried to get a scene with sunlit and shadowed areas. I had been using some four year old Arista.edu Grade 2 glossy, but for these panoramas I switched to some fifteen year old Arista.edu Grade 2 semi-matte. I’m stunned how much latitude I’m getting. It took some burning and dodging to get where I wanted, but there’s plenty of detail to be found in the negative in both sunlit and shadowed areas.

And now to change from all the architectural seriousness. I thought this was going to look pretty silly but you can hardly tell it’s distorted.

With these shrunk down to fit the blog format, it’s hard to tell how big these negatives are. I know I’ve been an advocate of small negatives, but I do recognize that large formats have their charms.
Posted by Nick Dvoracek at 11:29 AM