In my last post, I mentioned how I had sort of a reawakening of my interest in black and white about the same time I started working in color, but color won the day and I gave up the monochrome.

Several things have recently renewed my interest in black and white.

All the while I've been using the Populist I occasionally built 120 cameras, often just to demonstrate that my cheap homemade paper cameras could produce just as good photographs as expensive, beautifully crafted wood and brass cameras you could buy. Most of the time I just wasn't that impressed by the difference the larger format made, but recently I've gotten intrigued by it. I kinda wanted to try the Compact 120 6x9 again but my inner cheapskate, however, kind of drew the line at the 6x9cm format as just too expensive to be fun.

Before I quit using the black and white, I bought 10 rolls of black and white 120 film.  I still had a roll of T-Max, one of Tri-X and four of Arista 400 in my freezer. I don't think my inner cheapskate would be offended if I used them up in the Compact 120.

Also recently I was reminded of caffenol developer. If you haven't heard of it, it's ingredients are washing soda, vitamin C, and cheap instant coffee.

Making your own chemistry is about as pinholey as it gets, but caffenol also has other advantages. Although the washing soda wouldn't be very good for you if you drank it, everything in caffenol is pretty non-toxic and something that is pretty safe to pour down the sink (I mean, it's washing soda).   Hydroquinone and Metol are some pretty nasty stuff.  In normal home usage quantities it's not all that bad to dump regular developer in the drain, but caffenol is less of an issue. And it smells a lot better.

The really big advantage is it's a one shot developer mixed from powder every time.  Liquid developers oxidize pretty fast, and there's always a warning with powders to mix the whole envelope. Since I only develop a roll of film now and again I hate the idea of not knowing if my developer is still full strength.

So I started with the T-Max since the caffenol.org web site said it was tested pretty well.  I used the standard Delta recipe, since there was a post on the site that said it worked well with T-Max.  I didn't notice until now that the writer said they doubled the amount of vitamin C.

For one of those things that don't sound like they could possible work, it actually developed the film, but with a few problems.

Here are three pictures. I always have trouble just shooting to test, so I went for a bike ride along the old manufacturing district on the Fox River, which seemed pretty appropriate to black and white.

The historical society has kept two fishing shacks preserved.  Manufacturers in Oshkosh paid workers particularly poorly to gain a competitive advantage, which led to a nasty strike in 1898, so the workers depended a lot on fishing in the Fox for food. 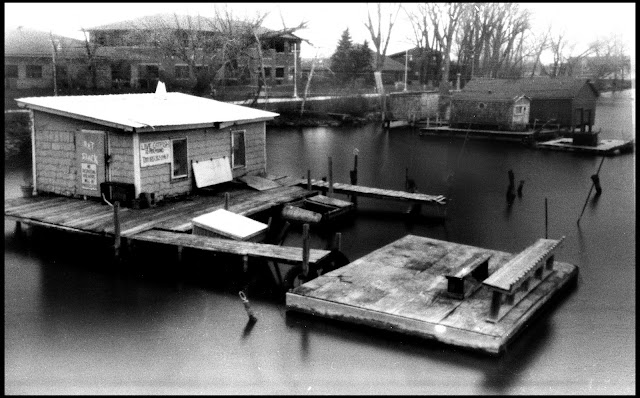 I love this side walk.  This used to be the road between Mercury Marine's Engineering Test Lab, still there on the left, and Radford Manufacturing, one of the wood products companies that Oshkosh was built upon, which was torn down sometime in the early nineties.  The streets in the area have been reworked several times since then. The street lights, power poles and fire hydrants were installed at different times, and when they decided to put this sidewalk in, it was cheaper to snake it around everything rather than move them. 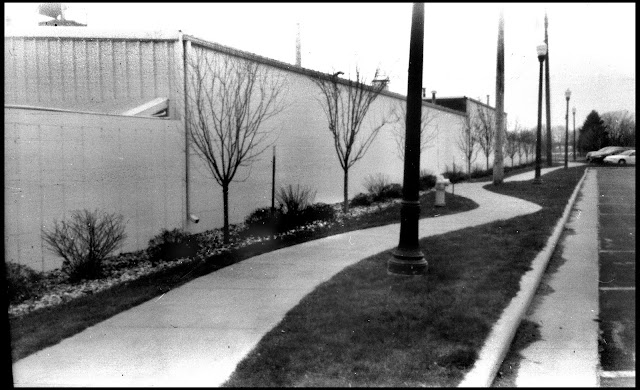 This is the site of Morgan Door Company.  This Old House actually did two remote segments there. They moved out to the industrial park about ten years ago, the old factory was torn down, and the site has remained vacant since.  I thought it was funny to have these two piles of gravel there since the city spent years getting a construction materials supplier just across the river to move out of the downtown. 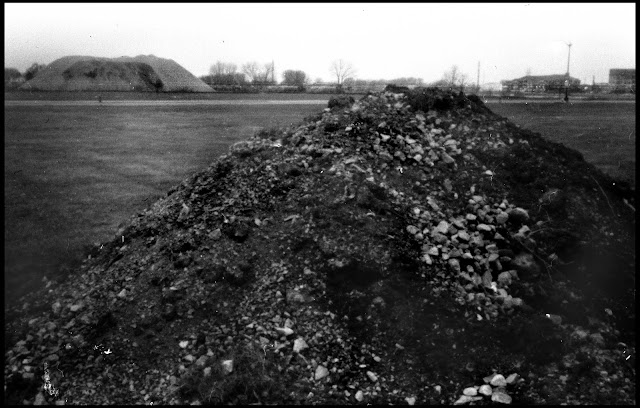 The negatives turned out all right, but the background fogging is pretty bad.   On the caffenol site there are several warnings that you might need a restrainer with faster films, but they're divided between those that say you're OK up to 400, and some saying 400 and over.

I think I'm with the 400 and over crowd.  Luckily, common table salt is one of the options for a restrainer, so I think I'm going to add that next time.

Unfortunately, there's no mention of Tri-X or Arista 400 at all on the Caffenol site, but they do refer to Ilford HP5 and the recommended development times are roughly similar. Anyone have any tips on using caffenol?
Posted by Anonymous at 5:23 PM