I'll leave you this year with a party.  Not the last day of the year, but the last day of the semester - The Good Friday Scholastic Colloquium. Originally started by a biologist in the '70s who currently holds the title of Esteemed Mixologist for U-Club, since his retirement the colloqium has been organized by an archaeologist, who also serves as mixologist at U-Club, although without the title. 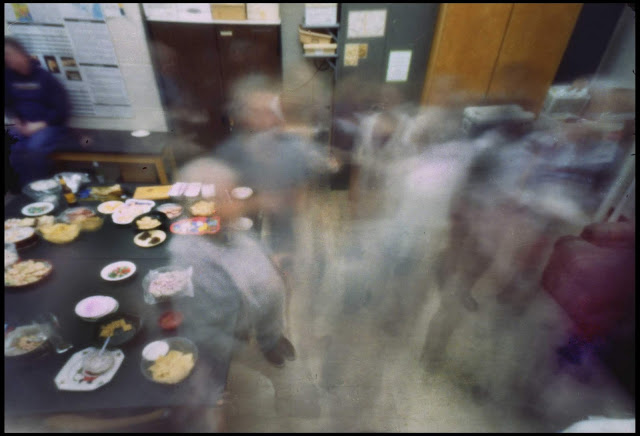 It's a movable event, but usually is held in the combination Anthopology Department student lounge/seminar room/storeroom. 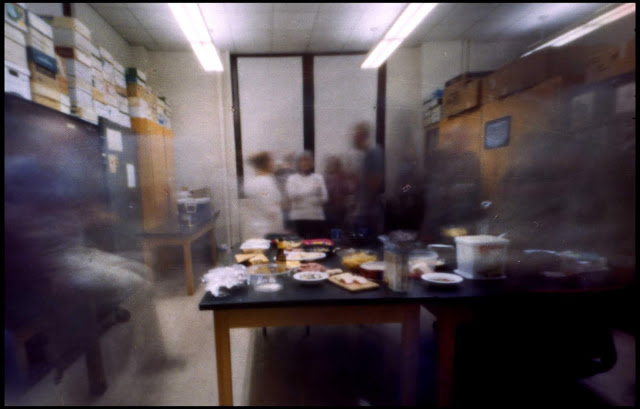 Refreshments provided by the attendees. The historian on the left related to me that one of the most memorable experiences of his education was building and using a pinhole camera in a junior high school science class. 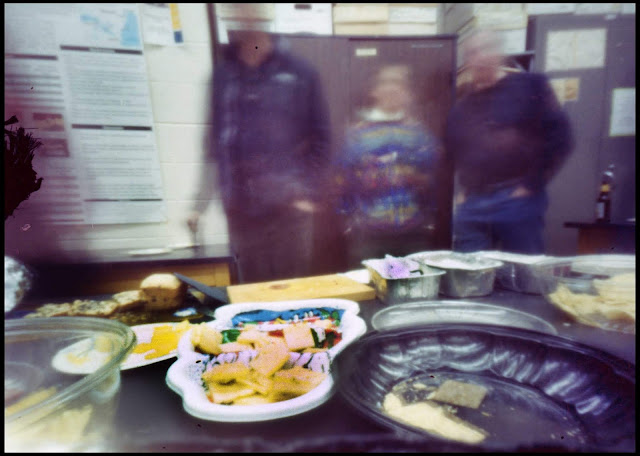 This year it took place on a snowy night so the attendance might have been a little sparse. 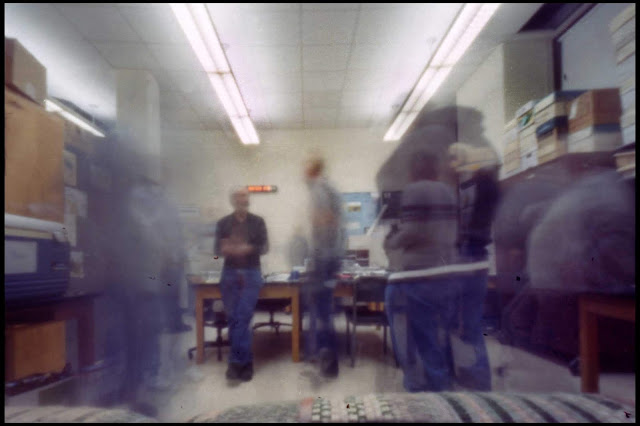 Myself, the organizer, and one of my former employees closing out the event. 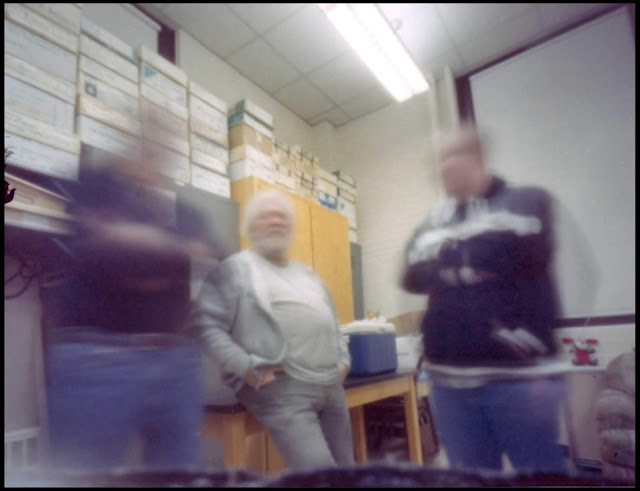 A few from the Evil Cube.

I mentioned previously how I was given permission to photograph inside the mansion at the Paine Art Center, not only with a tripod, but also behind the velvet ropes. Although I had been planning to make a camera like this for a long time, I finally built it for this project.

The building is oriented in sort of a northwest-southeast fashion and they don't open until 11:00 in the morning, which means nobody ever sees half the rooms with sunbeams through the windows. They gave me leave to come in as soon as the staff arrives to try to get those. Unfortunately, the day I showed up there had been a last minute event scheduled and the place was in an uproar and several of the rooms were being rearranged to accomodate the event.  On top of that it was cloudy, and in most of the places remaining available had 45 minute exposures.

I did get several exposures with the Evil Cube.

Mr. Paine's spectacles and stationary set on the desk in the bedroom. 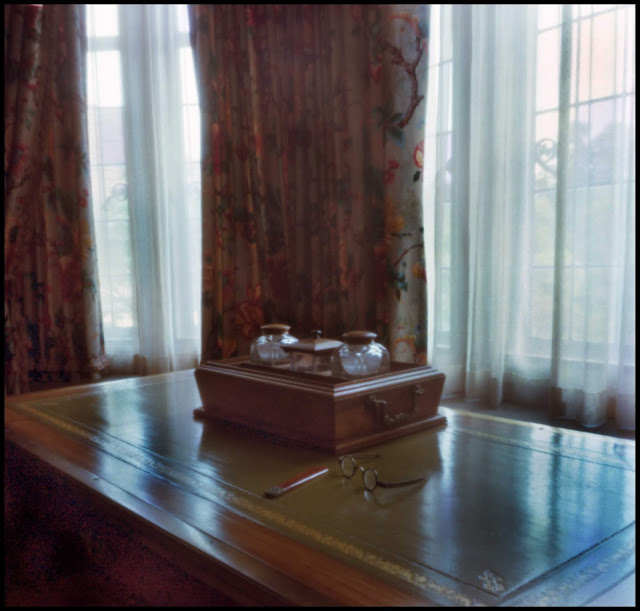 The sun did shine momentarily and all the activity was on the first floor, so I could get an exposure on the main stairway. 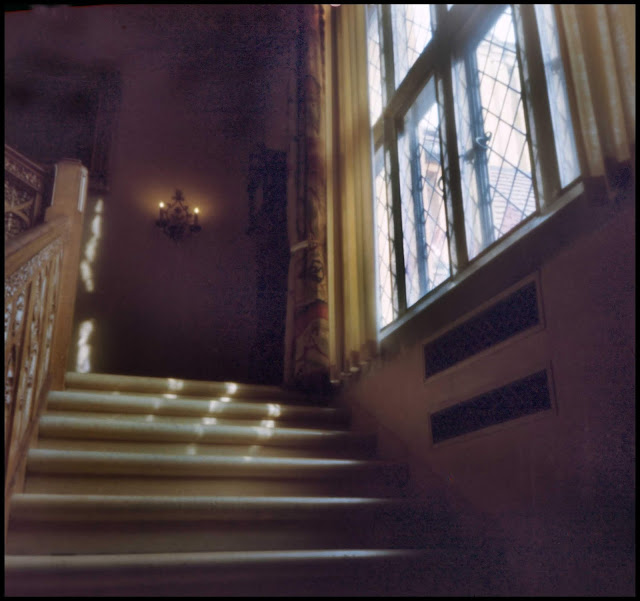 I was a little too picky about the weather after that and didn't get there again before my son's wedding in Massachusetts. Here's the one shot I got the chance to get of the happy couple after the session with the pro photographers. 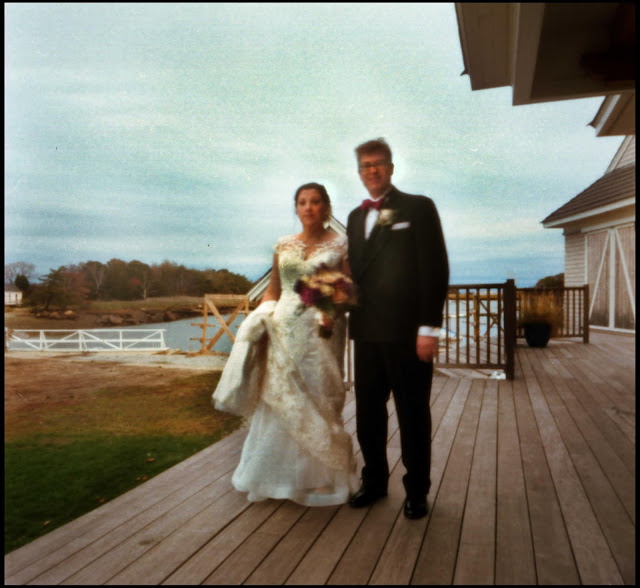 When we got back both Sarah and I experienced an epic cold, and by the time we recovered from that the Paine was in the midst of setting up their extravagant Nutcracker in the Castle exhibit, so I decided to put off the project until they returned to normalcy in February.

That left me with the rest of the roll to amuse myself. There are alway scenes I return to again and again, and the sunbeams in our living room is one of them.  If you look at the molding at the top you'll notice one impact of having a film advance that requires loosening the supply side and then taking it up with the other spool.  I apparently didn't pay close enough attention to making sure the film was tightly wound and still had a bit of a curve. 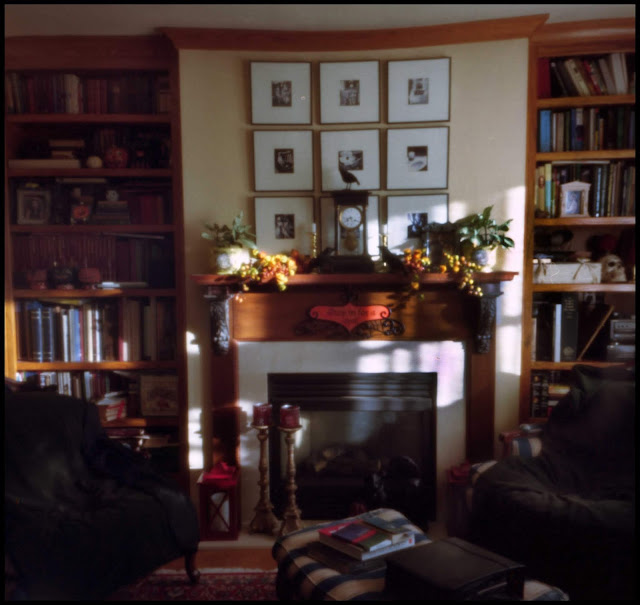 A bit later the sun rose a bit higher and illuminated the candles in front of the fireplace and the lantern echoing their color. 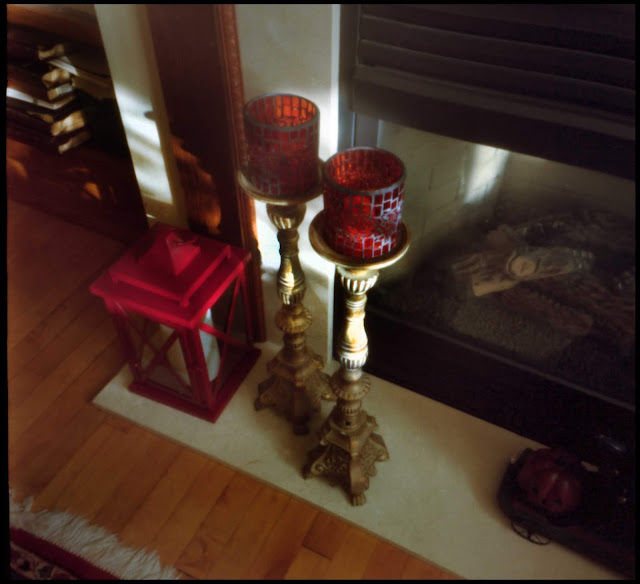 As I sit at breakfast in the kitchen, I'm looking into the dining room, so I'm often tempted by the sunbeams on the table. 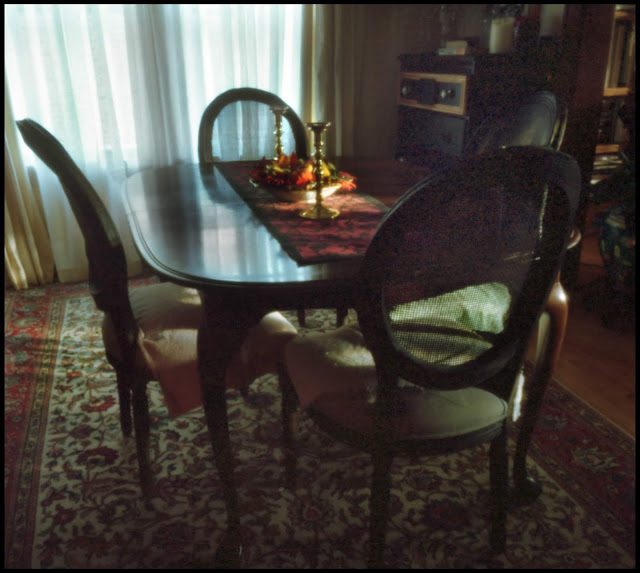 This copper leafed square bit of chair rail between the basement stairway and the dining room door often captures my attention but it's not someplace that's conducive to leaving a tripod there for an extremely long exposure.  Sarah bought a Nikon D750 this summer, so I thought I'd make some use of it by blasting the flash off the ceiling about 25 times. That seems to have worked, but not quite as interesting as the natural light.  Or maybe it's just an illustration of my political leanings (sigh). 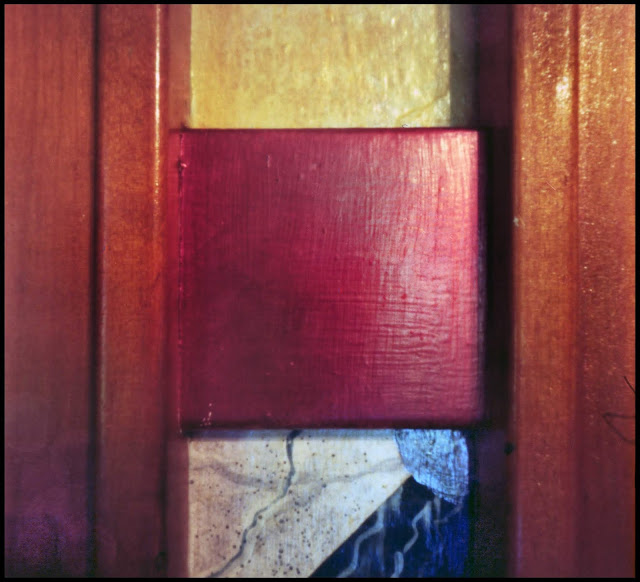 Global warming has extended the flowering season in Wisconsin well into December, but it was the end for these pansies when the first snowfall caught them. 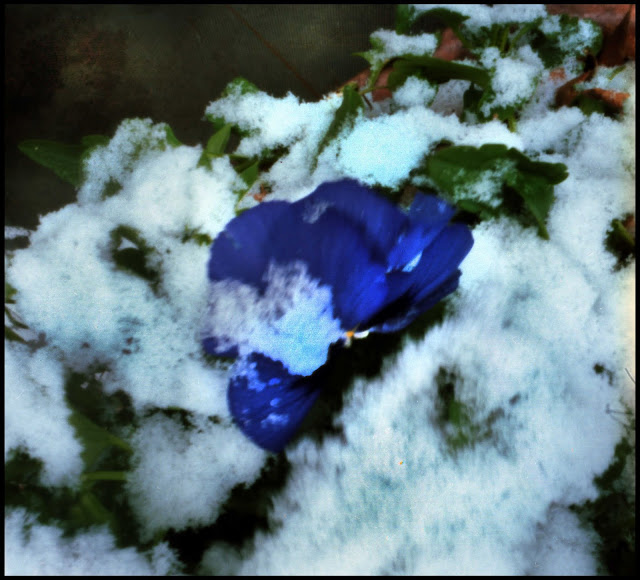 And lastly, me apparently working my head off writing out Christmas cards. 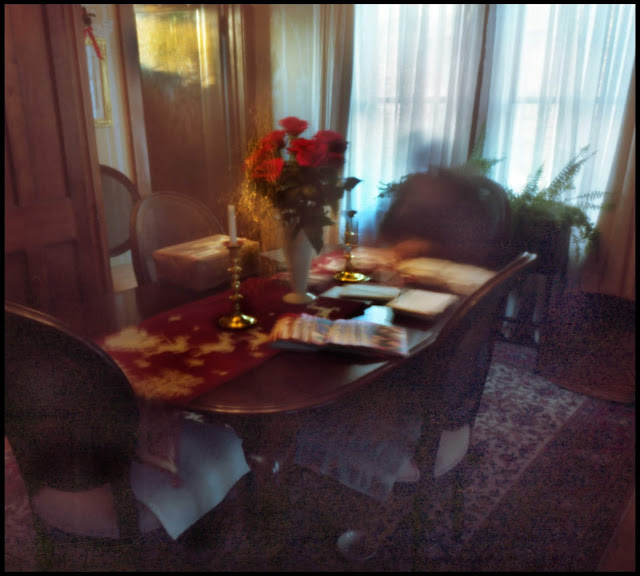 Once I fixed the clicker of the Oshkosh Populist, I reloaded it to explore it's mission to document Wisconsin's most level county.

A good part of the reason it's so level is that at least half of it is covered by water. I started with a bike ride and stopped at this spot on the causeway on the Wiowash trail over Lake Butte des Mortes where there's a large colony of water lilies.

Leaving the trail at Highway S, I rode back over Hwy 41 on Sunnyview Road to document the biggest hill in Winnebago County, the Landfill. (The highest natural point is a ridge about fifteen miles southwest, almost in Fond du Lac County.)

I've always had a little trouble staying within guidelines, including my own, and if Jeff Bridges can use a Widelux everywhere he goes, I didn't think it would be a problem to portray the entire width of the back porch.

The Oshkosh Saturday Farmers Market is a major event each week and one of the delights is to get a giant bouquet of flowers that the Hmong farmers seem to specialize in, and who says you can't do closeups with a panoramic camera.

But back to the original assignment.  A few blocks from my house is a former industrial area that still includes a few manufacturers, but mostly distributers and warehouses. This one reminds me of one of Pinhole Day colleage Lena Källberg's Swedish Facades series. I have no idea what First Supplies are.

Where an old factory was torn down not too long ago, a mini-storage unit replaced it and this featureless facade with clapboards that you'll have to zoom in to see seemed like a good choice for the panoramic treatment.

Unlike many rivers that towns were built on, the Fox River's valley is so gradual that you would hardly notice. Here's the entire stretch of the north bank of the Fox between the Ohio/Wisconsin Street and Jackson/Oregon Street bridges.

Turning to the left, thinking of fellow LUMPer's Earl, Marv and Tom, here's the Wisconsin/Ohio Street Bridge brilliantly lit by the morning sun. (you might notice the Mercury Marine Engineering Lab there on the left of the previous photo and the right of this one)

The Paine Lumber Company built a series of six identical townhouse buildings in the 1920's just south of the factory for their employees. They are now all each painted a different color.  I was surprised to find that a single unit was the right aspect ratio to fill my frame.

Halfway between the University and my house is East Hall field, formerly the site of an early dormitory, but now the site of soccer, rugby and softball fields and this stand of giant Oaks along Jackson Street.

And finally, you can't get any flatter than Lake Winnebago.