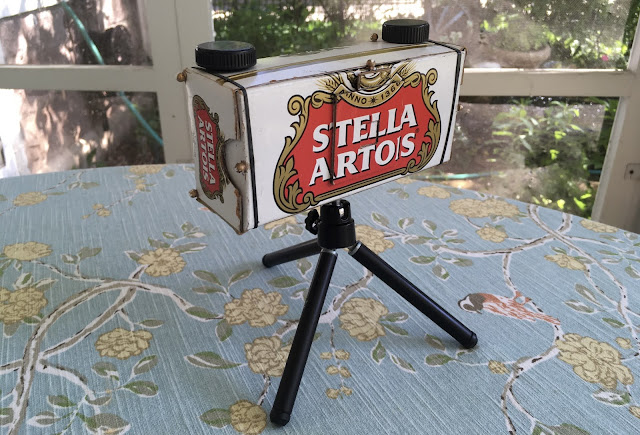 When I made the New Glarus Populist, I fessed up that I hadn't actually tried the revised 10th Anniversary Populist template for the 35mm camera.  Well, now I have to leak that I also didn't try the new 6x9cm template either.

If anybody actually tried to make it, I apologise that there were a couple mistakes 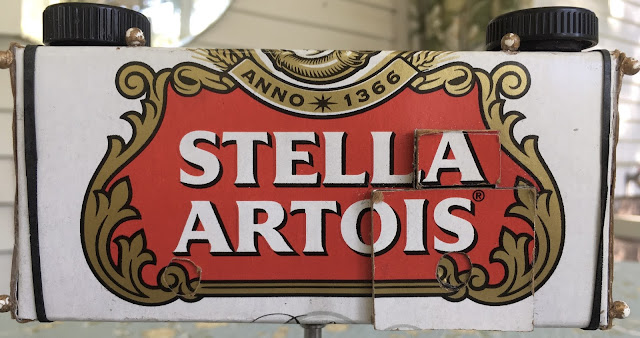 Other than the size of the image chamber, the thing that distinguishes it from the 6x6cm is where the counter hole, with its shutter, is. If you look carefully at the picture above, you'll notice a patched hole just under the A in Artois.  I put the hole on the wrong side on the template. If you lined up the first number in it, you would already have advanced past most of the frame. Incidentally, this is assuming the supply goes on the right side as you're looking at the back of the camera.  If you preferred to load your film on the left, the hole would go at the top left, but then the numbers would be upside down.

The other mistake is that I didn't modify the film counter shutter itself for the new position.  In the 6x6cm cameras, the counter hole is in the middle and the shutter is exactly the same as the taking shutter on the other side. With the counter hole at the bottom like this, that shutter would extend below the bottom of the camera.

I've fixed both of these issues.

I chose this box because the design was symmetrical and about the right size to fit on a camera this size.  I have to admit I thought Stella Artois meant something like Artistic Star, but then I looked it up and found that Artois was the last name of the guy who founded the company.  Oh well, it sounds a little like DuBois, which would have been Stella Kowalski's maiden name, although I've never read or seen A Streetcar Named Desire. Coincidentally, the beer is very much like Supper Club.

The template has the pinhole 60mm from the film plane, but I hated the only roll I ever shot with a 6x9cm camera at that distance, so this time I cut it down to 45mm. Since I still had all the paint I used to make Goldberry's finder beads gold, and this carton had gold elements, I painted the map tacks again. Also, that makes this thing pretty wide angle.

I've found a roll of Arista.edu 400 that's been knocking about in the bottom of a box for about 10 years and decided to use that to test the camera. I'm not sure if it's just been bad luck, but I've never really liked the results I got with this film.  It strikes me as having a pretty limited latitude, and especially blocking up to white pretty suddenly when you should still have some grey scale left. There's also a pretty minimal amount of shadow detail.

Since this seemed like a fairly fast combination, I started in the kitchen with the tableau Sarah set up in the shelf under the cupboards.  One thing I've always liked about this display was how excited the little Dutch violinist was to be playing with Metallica, but I let the mouse from the audience get in the way and you can hardly tell he's there. 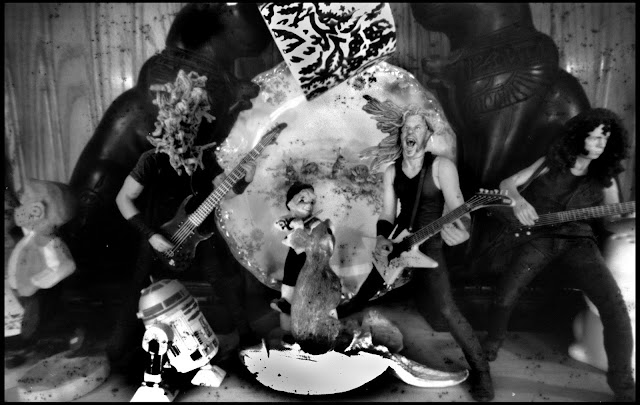 The sun was shining in the Sun Room while I read the Times the next morning. Funny how the shadow of the camera is right on my face. 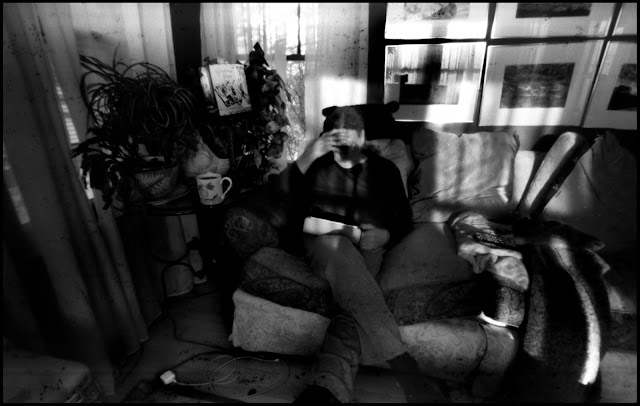 Ya gotta get out in the sunshine to make sure a camera is light proof, so I went out for a bike ride.  First stop was the lions at the library. 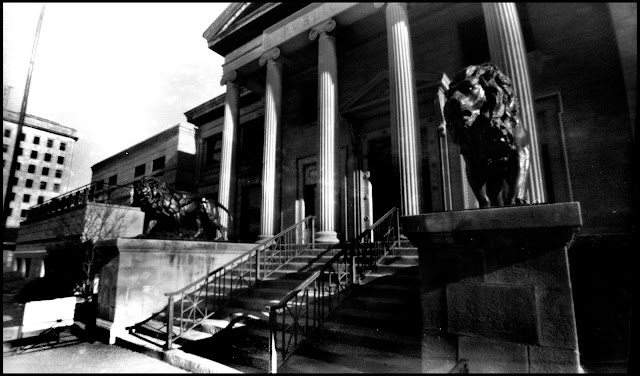 Down a few blocks to Opera Square. 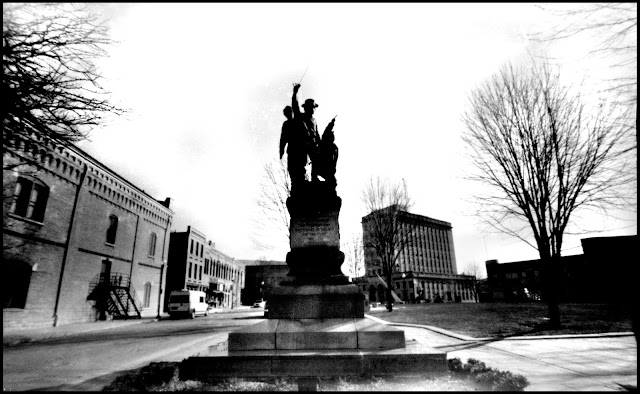 The passageway on the River walk under the Wisconsin Street bridge.  There was a fisherman in a red jacket just on the other side, but he kind of disappears in black and white. Another unfortunate merger - there's a seagull that sat nice and still on the street light just on the other side of the bridge, but he's almost lost against the railing. 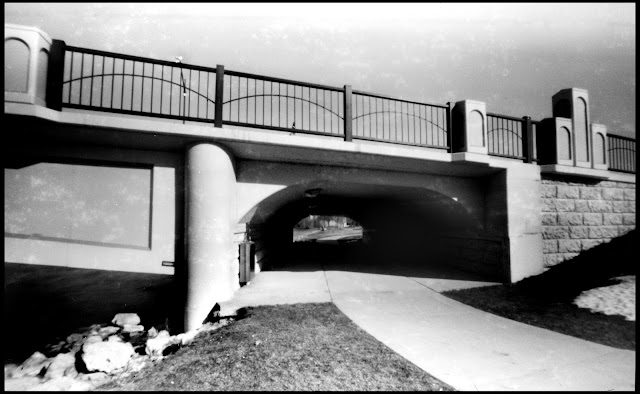 The old train station on the grounds of the Oshkosh Public Museum. 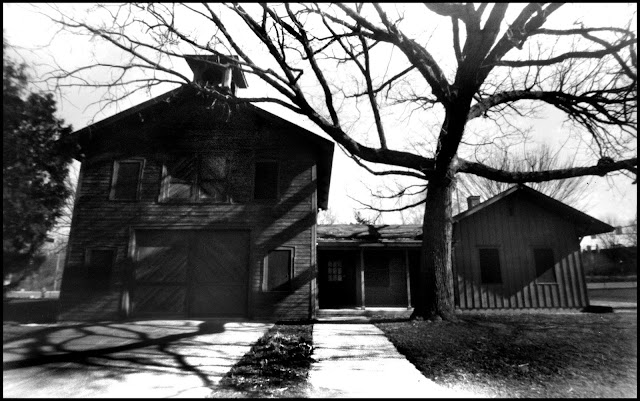 Across the street, the patio of the Paine Art Center. 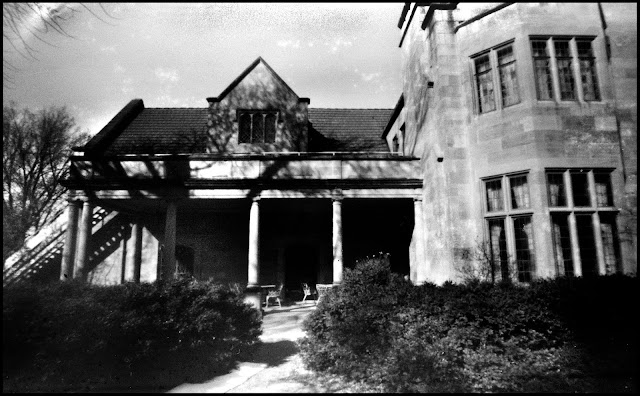 And, the pergola which leads to the woodland path. 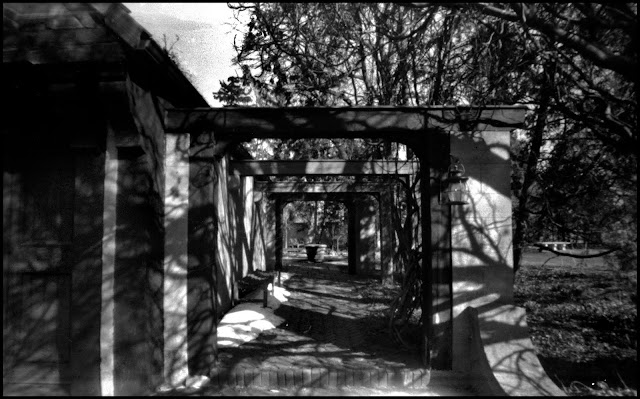 I suppose if this all is gone before then, it will be good for May flowers if they don't get washed away in the floods when it all melts up north where they got twice as much.

By Saturday afternoon frozen sleet had been coming down driven by a 25 mph sustained wind for almost 24 hours. The city usually doesn't plow until the snow ends, but I think they were afraid it would be too heavy if they left it.  (What they left at the end of my driveway was certainly heavy.) 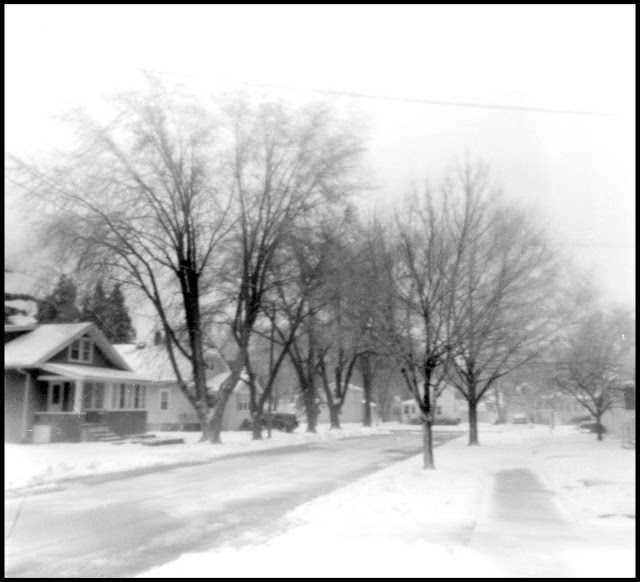 For a few minutes on Friday when it started, it left a nice coating of ice on everything. 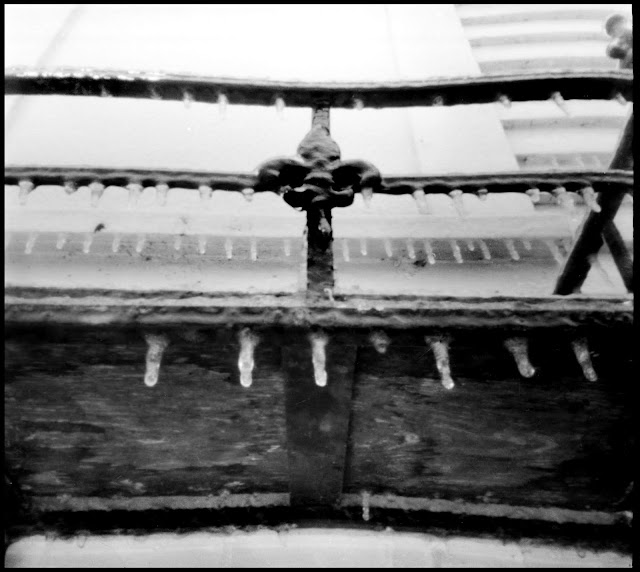 The normally clear glass in the little greenhouse was frosted by it. 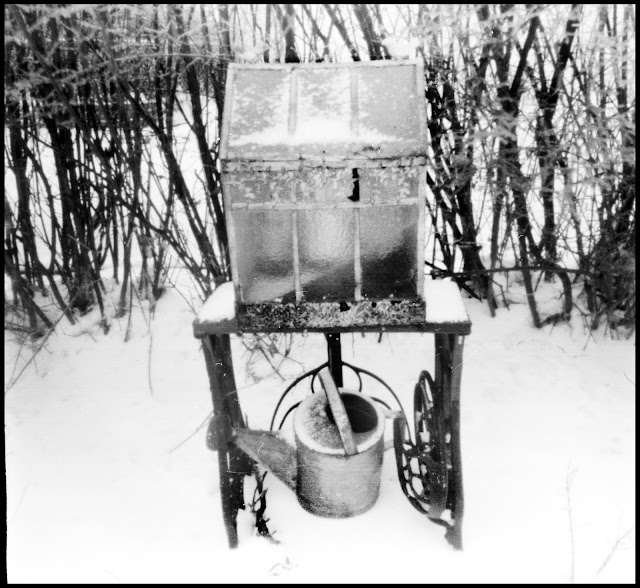 Sunday afternoon the wind was still at blizzard levels, but the precipitation had changed to something more like regular snow.  Last year at this time the magnolia was in full bloom. 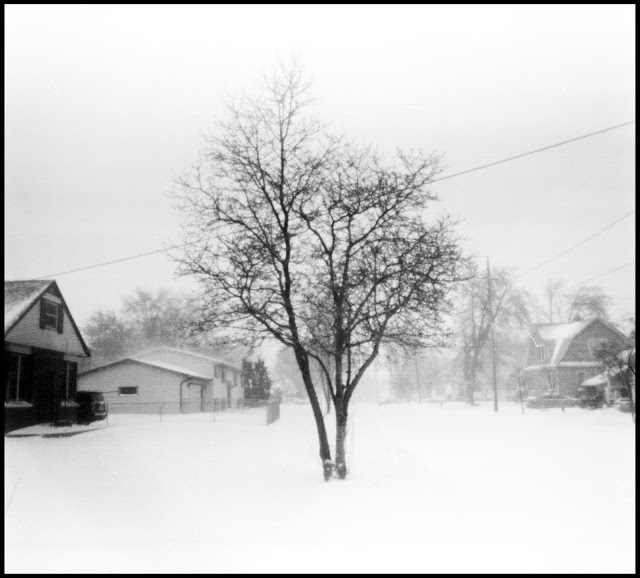 The driving wind coated most of the back porch with a fine frosting filtered through the screens, 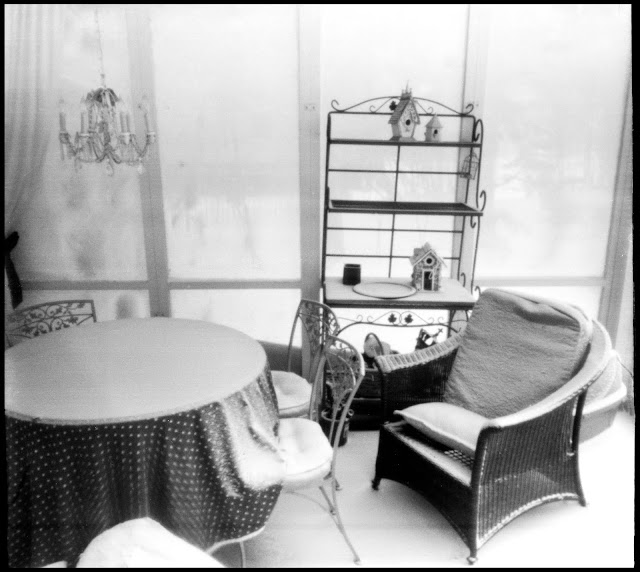 Looks like soccer season is going to be delayed a bit. 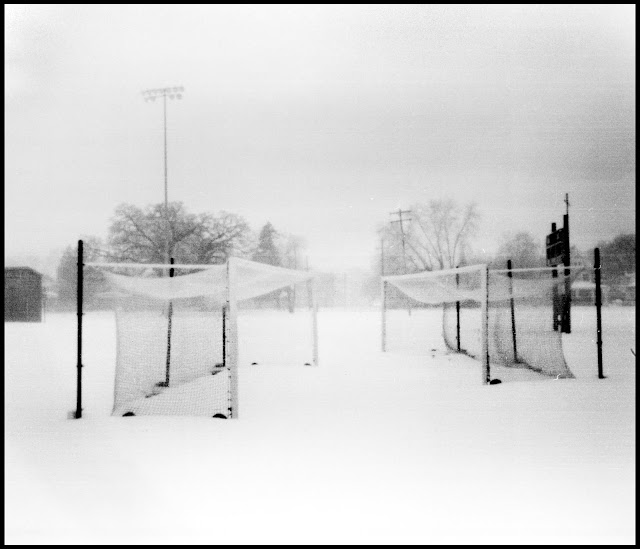 His pond was completely covered, and Elwood was buried up to his armillary. 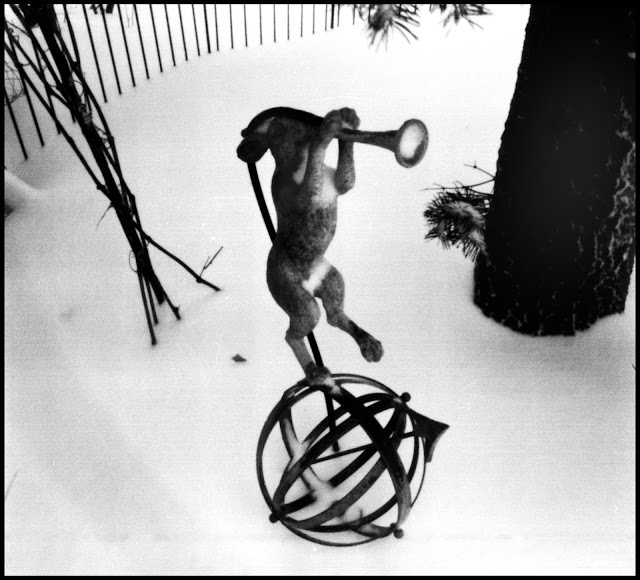 I don't think I'll be biking for a while, both bikes were frozen to the ground.  I got the other one free,  but I had already changed the studded winter tires about a month ago. 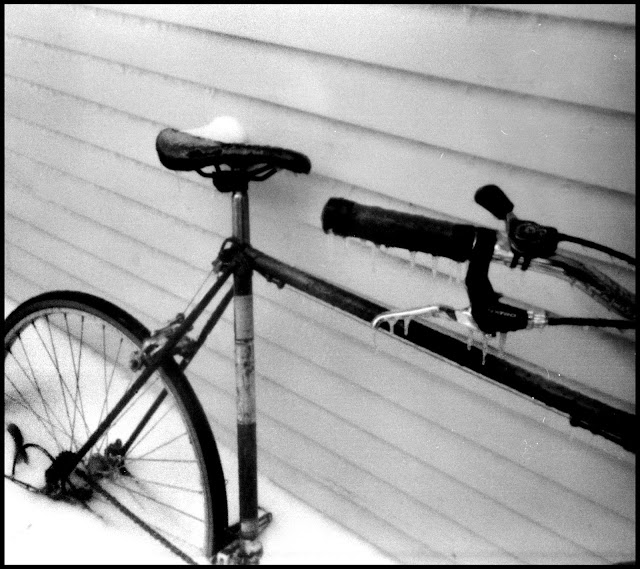 All with the Evil Cube, .29mm pinhole 6cm from 6x6cm frame, loaded with Ilford HP5 developed in Rodinal 1:50.
Posted by Anonymous at 5:08 PM No comments:

Inspired by my walk across Lake Winnebago, and a maybe a little bit by Daphne Schnitzer's views of the Mediterranean, I've been keeping track of the ice as it recedes from the shore.

The ice is always thinner on Millers Bay with a rougher texture and puddles of water forming on surface as the ice melts. 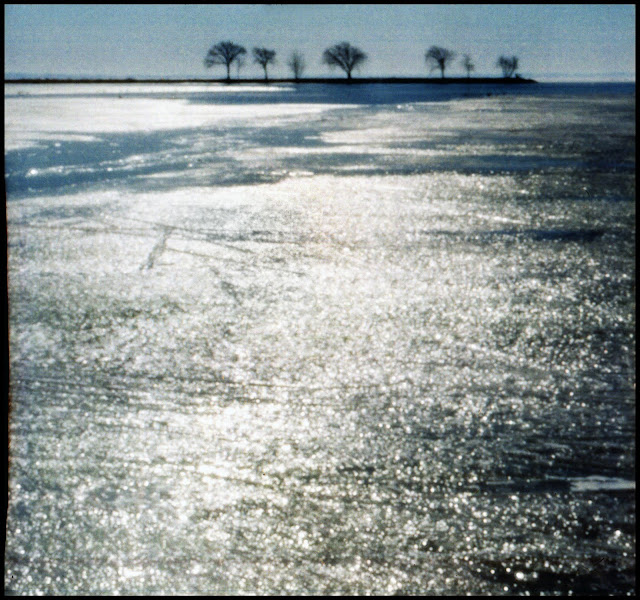 Out on the Ames Point breakwater that encloses the north end of the bay, the ice looks much more solid on the lake, but with open spots right around the end of the point. 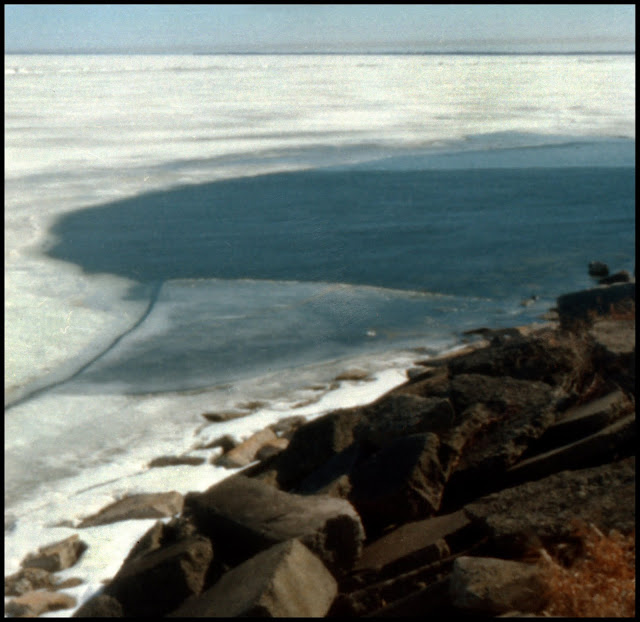 Looking back toward Oshkosh, there are open channels. 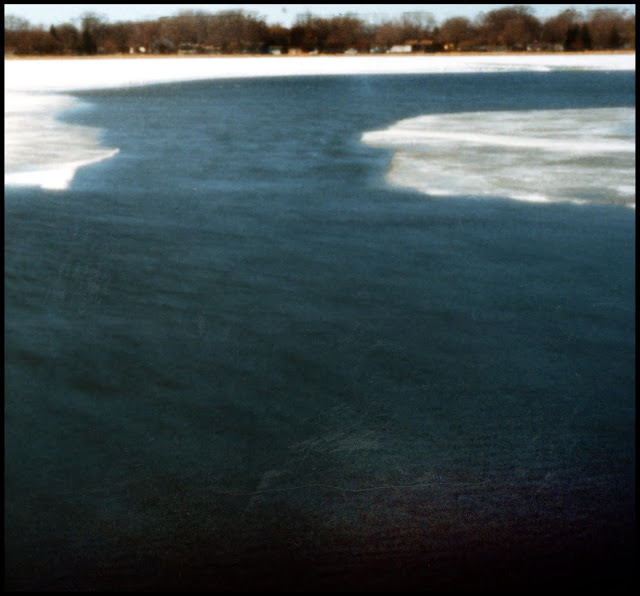 A week later, the north end of the bay looks like it's all open water, but the gulls standing on the surface betray the location of the remaining ice. 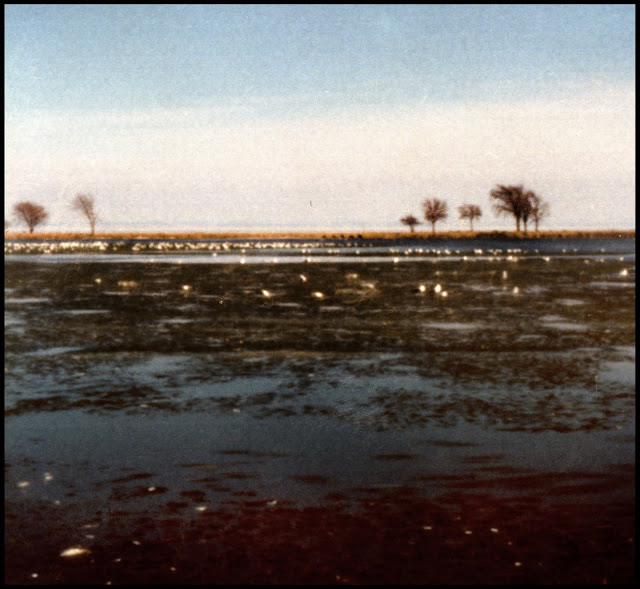 Just a hundred yards or so down the shore, the south end of the bay remains locked in ice. 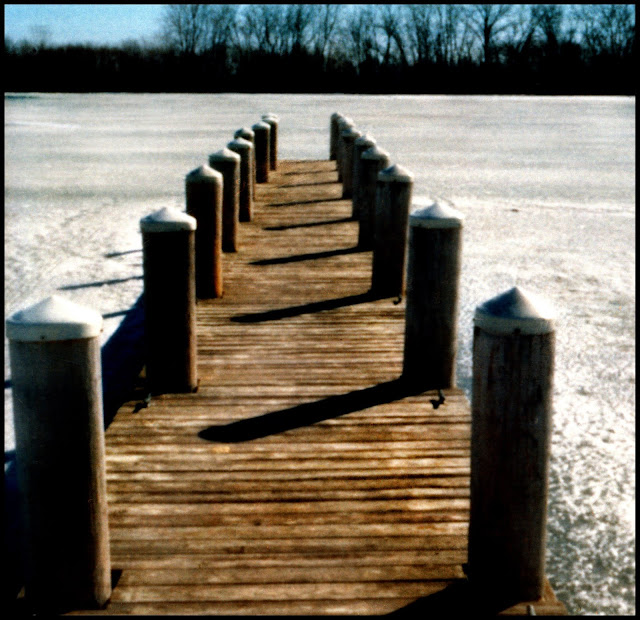 Over on the actual lake shore, a Christmas tree marks where there had been an open crack, which seems to have healed, although the bridges have been removed and the roads abandoned for almost a month. 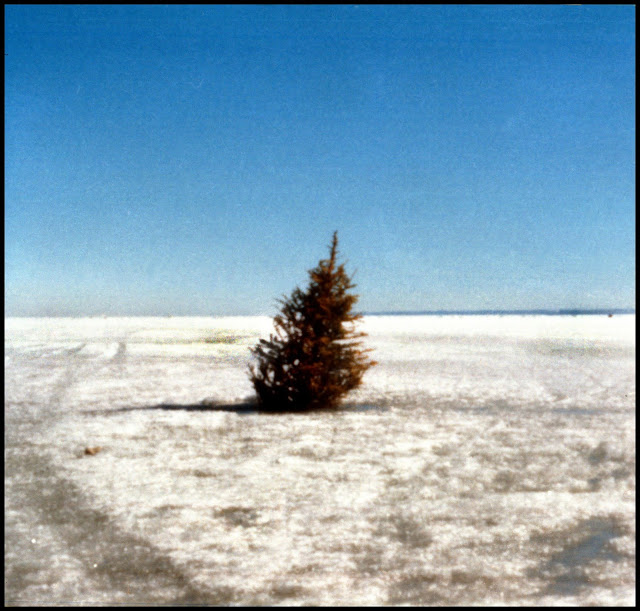 Looking out over the lake, you can still see the line of trees that marked the road receding into the distance. 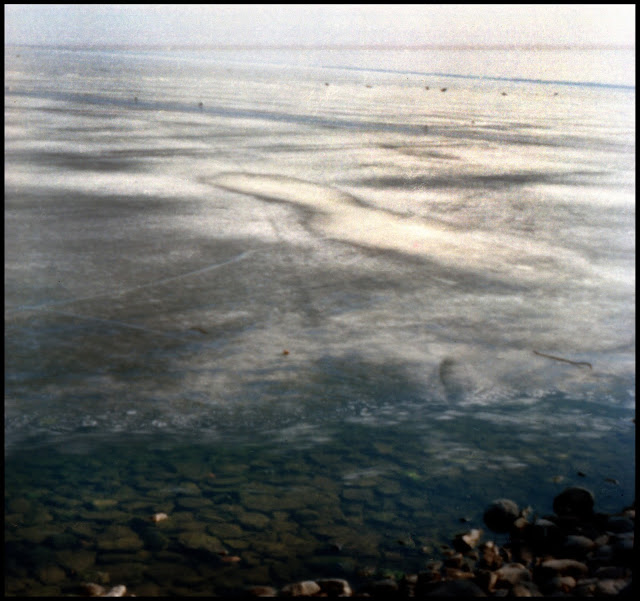 Four days later, the lake was completely ice-free. I think I'd like to do some more work with the ice, but despite the forecast of a major winter storm over the next few days, it's going to have to wait until next year.

All with the Moderately Telephoto Pinhole Camera in a Plain Brown Wrapper, loaded with Ektar 100.
Posted by Anonymous at 10:57 AM 1 comment: