Philly in the springtime.

Going to give a talk on pinhole for the Fox Valley Photography Meet-up Group, I thought I ought to have a camera loaded with film along. Medium format was too much responsibility for this occasion, but maybe it could work with a 35mm Populist. Philly was up in the rotation.

This was just before the equinox. The meeting was at 6pm but I arrived a good bit early to set up and to maybe take a few pictures. It was almost sunset when I got to the Kaukana Public Library, in a restored early 20th century paper mill. Right across the street is the lock channel of the Fox River, crossed by the Veterans' Memorial Lift Bridge. The locks were still frozen solid. This is also the location of the workshop I did in April for an adult dry run of the one that starts with middle school kids next week. 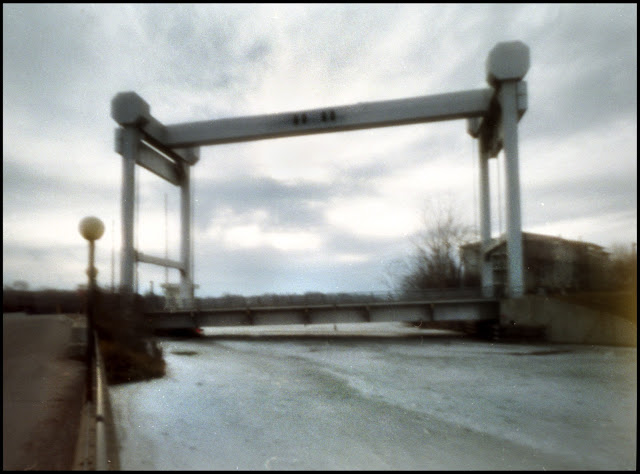 The room had to be totally dark to compensate for a less than new projector, so no pictures. I had Philly with me for the camera-making workshop, but no pictures with it then either.
I don't know how much later it was when I went on a bike ride to look at the ice shoves on Lake Winnebago. It was almost done breaking up. 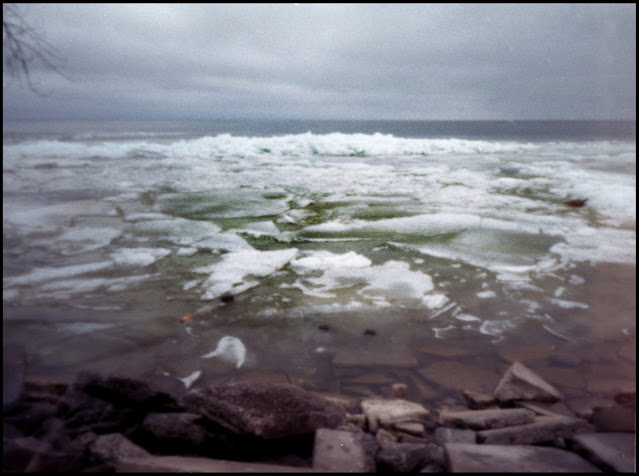 I wasn't about to walk out on it, but I put the tripod out as far as I could reach. 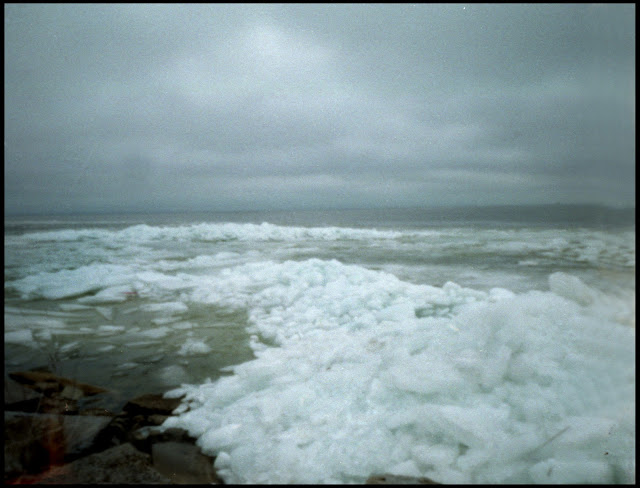 Time-Warner has had a city-licensed cable monopoly forever.  Recently they let TDS lay fiber to compete. We had these little blue and yellow flags that looked like support for Ukraine all over our yards to mark the location of dangerous utilities. Instead of actually digging holes, they drilled them with a giant, loud jet-washer. The trees were nowhere near leafing out and the lawn was brown. 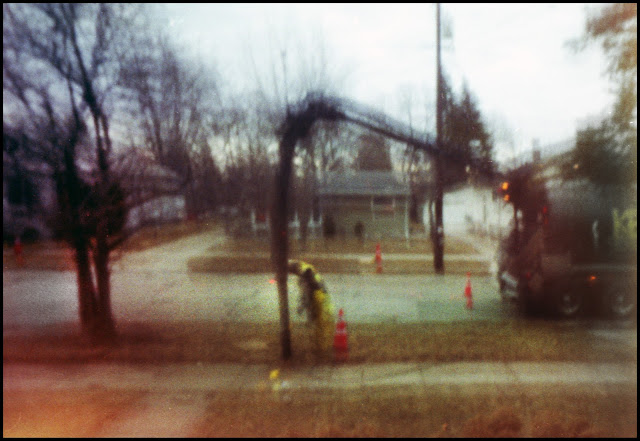 Around here, it was still kind of winter. 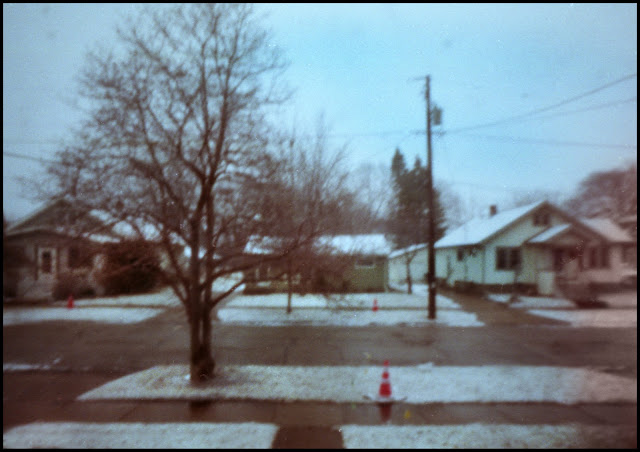 A couple months later they showed up with a flotilla of equipment darting up and down the street. 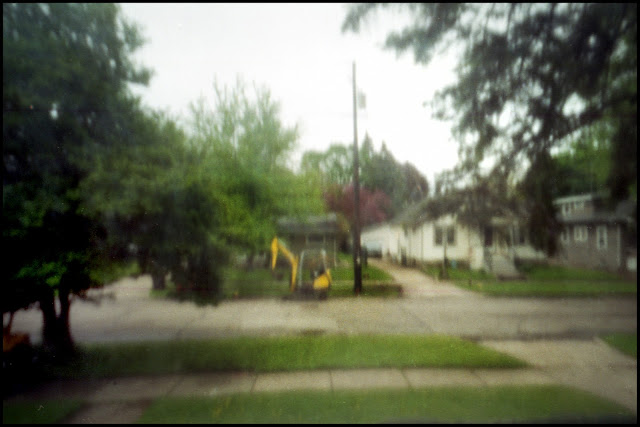 We were spared much more violence in the front lawn, but our neighbors had quite an event. The guy in the hole manually wrestled the thing they were burying into position. 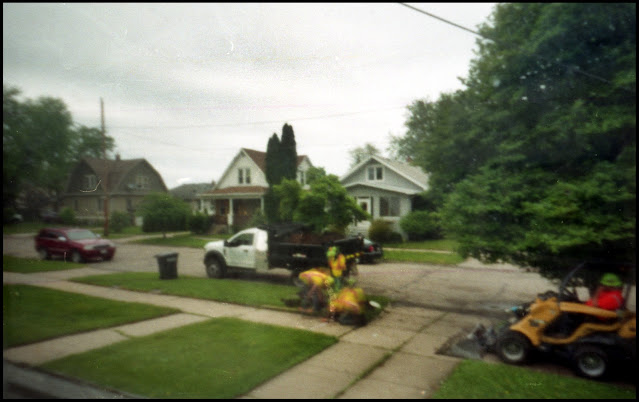 Brian Ledwell has graciously been making parts with his laser cutter for my museum workshops next week. Pretty cool. Parts already cut out with the adhesive already attached. The kids will still make the outside of the camera. His official office is in my old cave in the underparts of Polk Library. This is his pandemic inspired home office - with a window - where he now works most of the time. I intended to take more pictures but we went to his shop and I left the camera with the shutter open while we were gone. 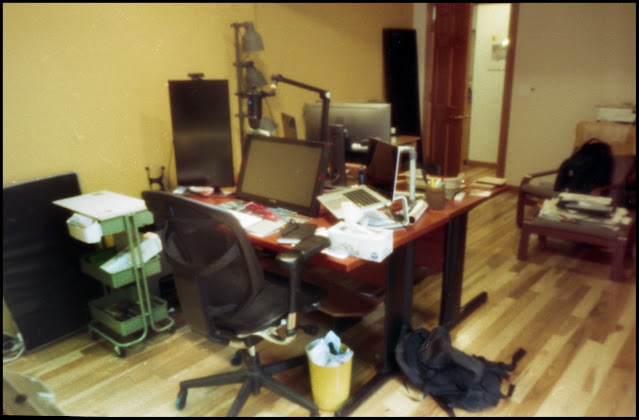 The spring was very late this year. This was probably our first visit to the garden center judging from how small the plants are. 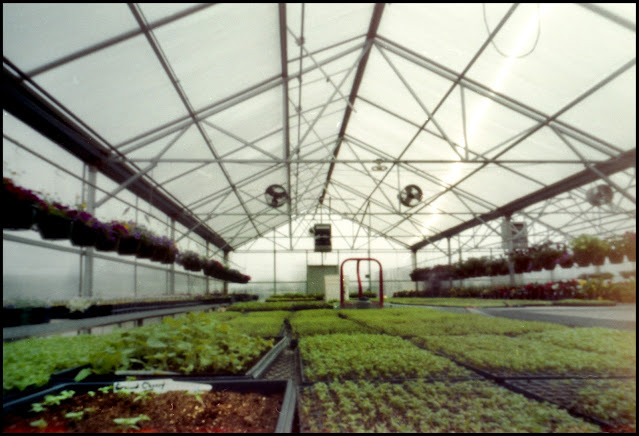 They had lots of things that wouldn't stand a chance outdoors in early May, probably for Mothers' Day. 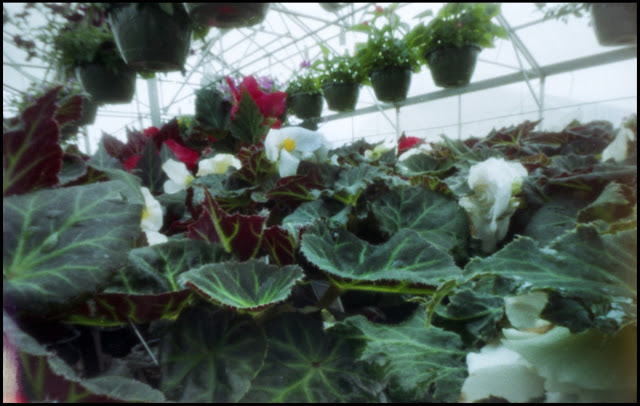 Some with beautiful blossoms. 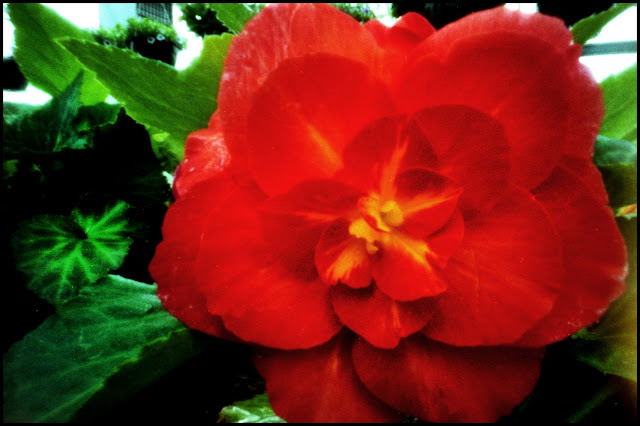 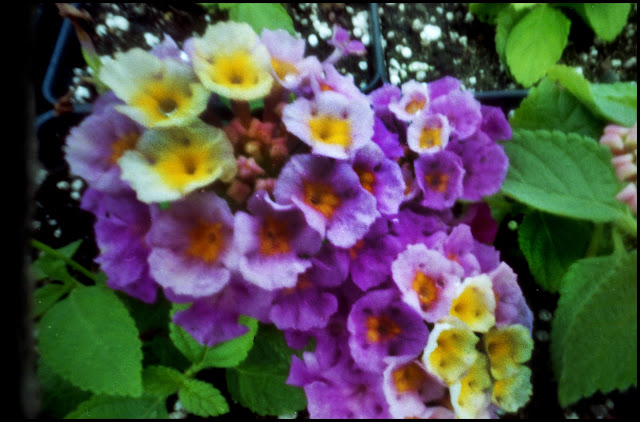 Are you getting sick of seeing the Jackson/Oregon St. bridge fixed in an upright position? So are Oshkosh drivers, and especially pedestrians and bicyclists who have to go an extra kilometer to detour around it. 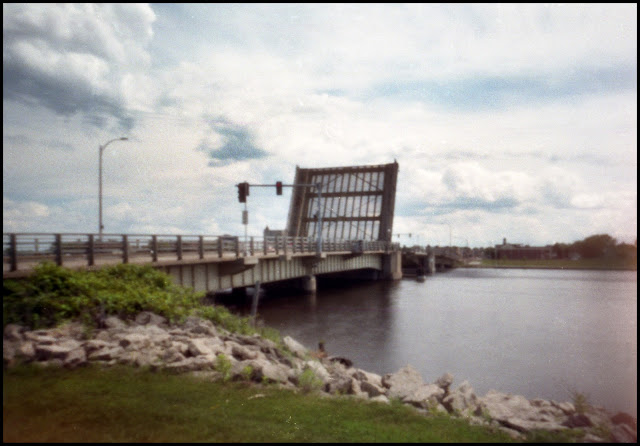 Then finally, after being tempted to blow a roll of 120 color film in the garden, I saw it as an opportunity to finish Philly's roll.
We tried to protect the cabbage plants with these modified pots, but they were only moderately successful against the rabbits. 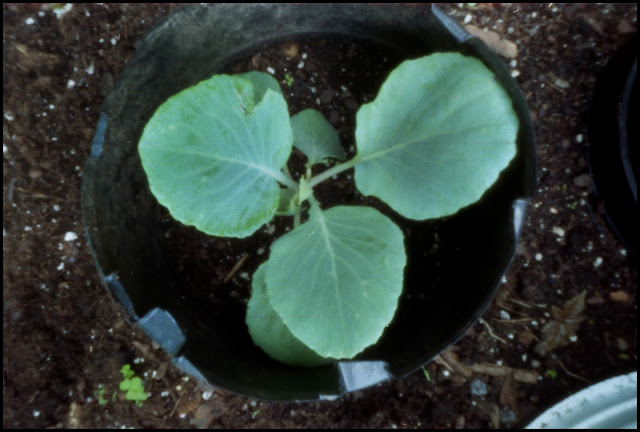 A coleus next to Elwood's Pond. 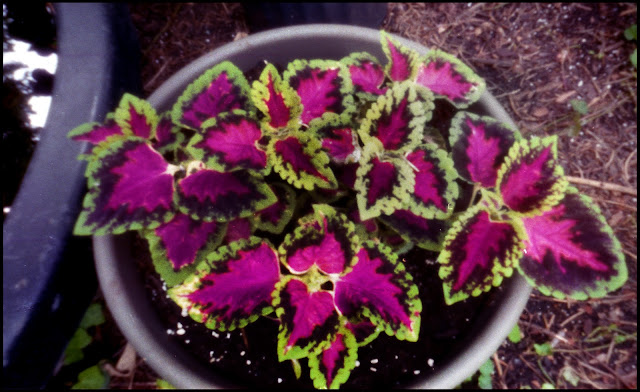 The exuberant madness of the daisies 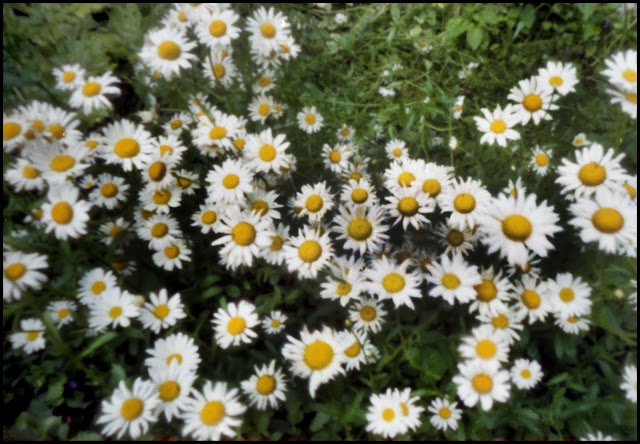 A big drop of water collected on a hosta leaf. 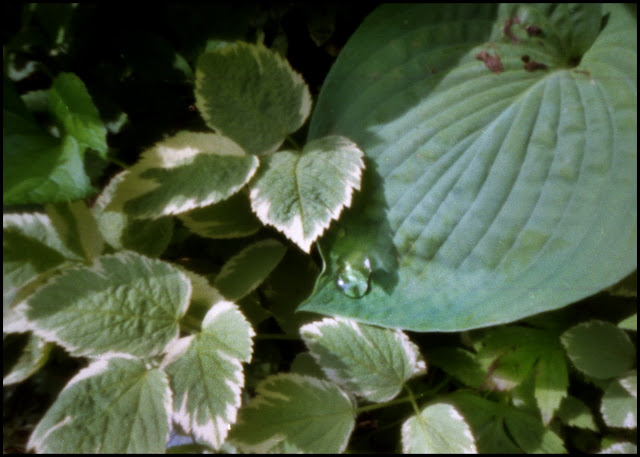 The bench has been taken over by the old roses. 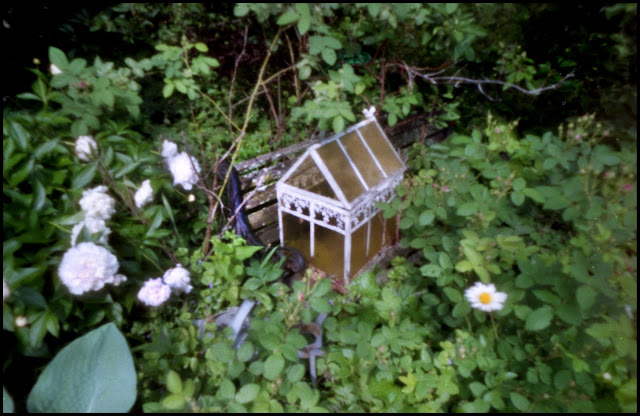 Side-lit lilies of the valley. 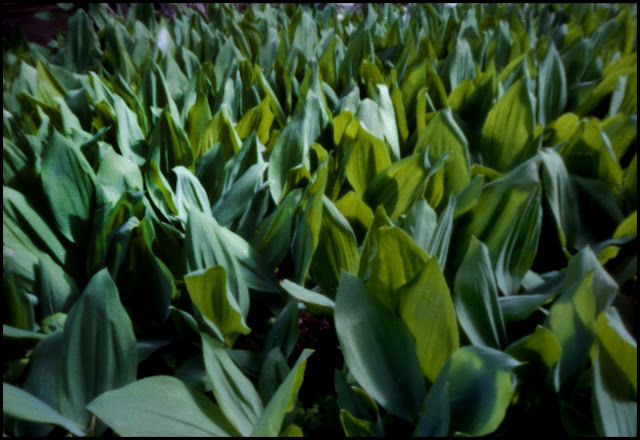 An homage to George Davison. 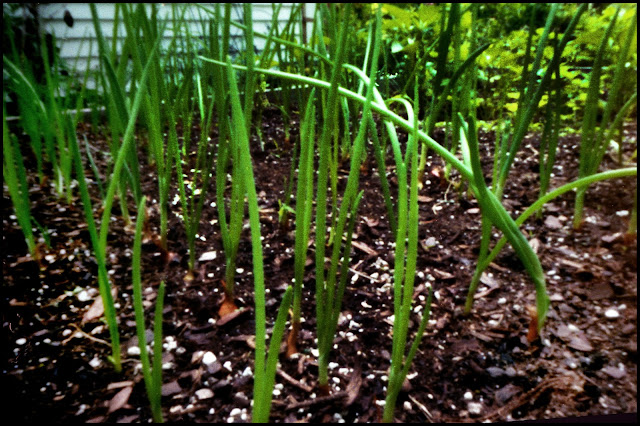 Who spilled bleach on the purple pansies? 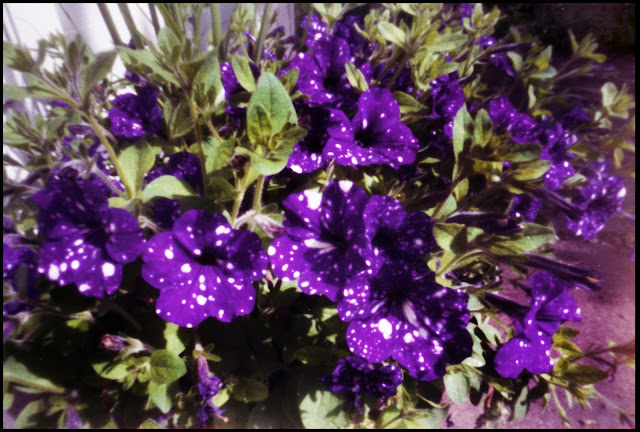 Impatiens and coleus around Elwood's Pond. Incidentally those are the new garage doors. 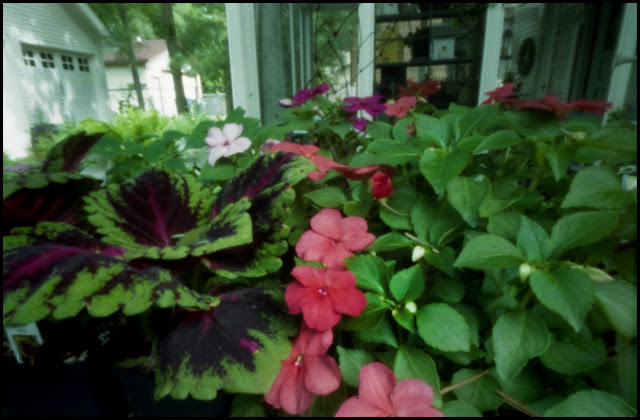 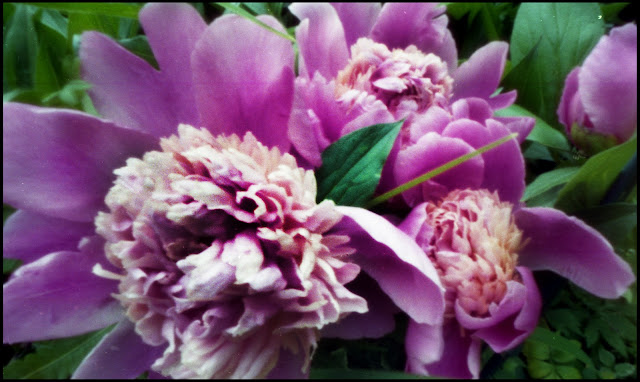 The peonies weren't really dark purple, but anything else looks even more unnatural. 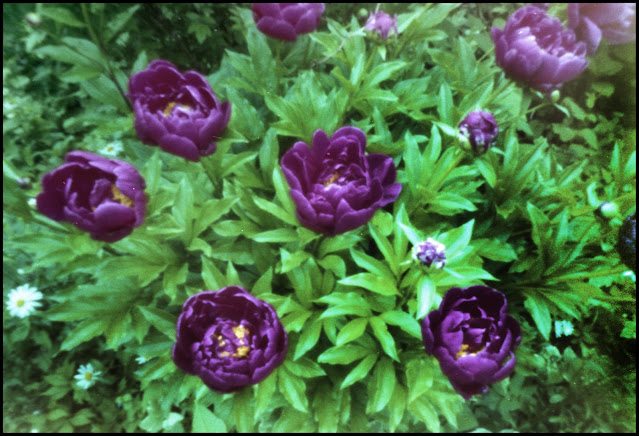 Coral belles making quite a statement without even blossoming. 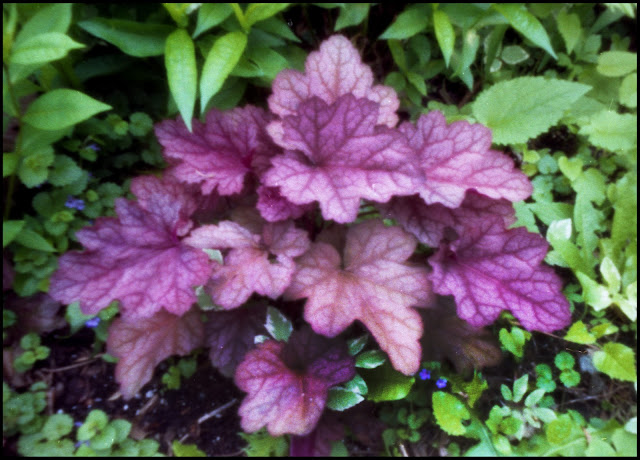