In a post-pandemic attempt to become adept at interacting live with other humans, I've been participating in the Fox Valley Photography Meetup Club of Northeast Wisconsin. One of the features of this, and most other photography groups, is a monthly challenge. The resulting photos are discussed at the meetings. I've been known to give myself a challenge topic before, so I can get into the group activity.

The challenge this month was creative color.  My film was supposed to come back on Tuesday, but Camera Casino has changed their courier schedule with the lab to only once a week, so my negatives weren't ready for the Wednesday meeting. This didn't happen to anyone else. I was the only one using film. I submitted an older photograph that I thought said something about color and also was a sight gag for my light-refracting companions.
We had a full agenda with a presentation. There was a request that each member only submit one photograph for the discussion so it was kind of a Worldwide-Pinhole-Photography-Day-like necessity to pick one favorite. Now that I have the negatives back, which one of these would it have been?
Although I was concerned about the cliche of pretty flowers, I started in the garden. The exuberance of the wild daisies has always appealed to me, especially combined with the dappled light. Even on the calmest days, it's hard to get a second or two when they hold still at the end of their long stalks. At least four other people submitted pictures from the challenge which featured visibly apparent long exposures, and one was even with a pinhole. 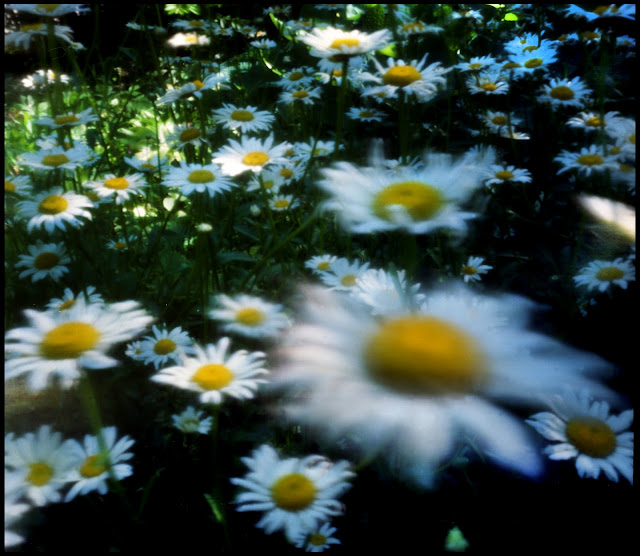 The peonies were putting on their show. This white one was the only one situated where the breeze couldn't get at it. 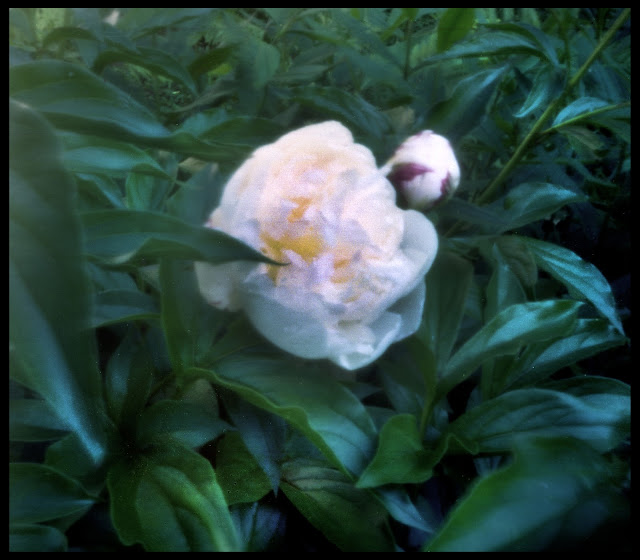 Trying to outwit the wind is a losing proposition and I could easily use up the whole roll, so I spent the next hour and half in the garden finishing a roll of film that's been in Philly since spring, but that's another story.
Having nothing to do with the creative color challenge, my 80 year old garage doors, whose mechanisms couldn't be repaired because of liability issues, were going to be replaced the next day. It worked out pretty well for my knees, so I guess I can handle it for the garage. It's been about a month now, and I still reach for the handle to close the door when I get out my bicycle. 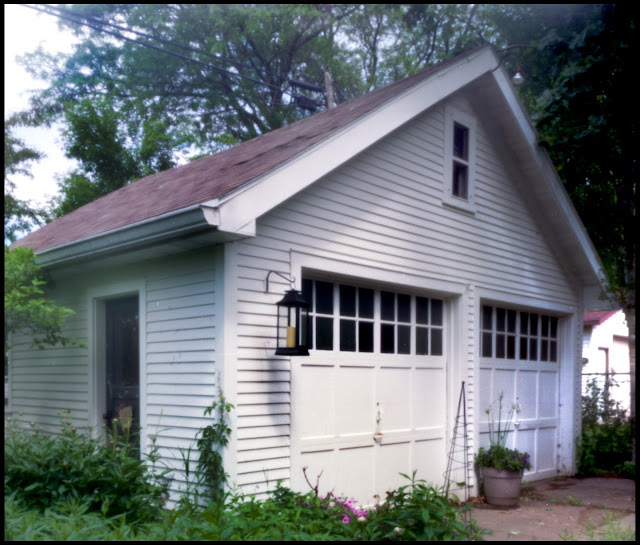 I'd  better get serious about this challenge. I went out with a couple scenes in mind.

The Jackson/Oregon St. Bridge will be out of commission for several months. I was hoping they had more flashing red lights. 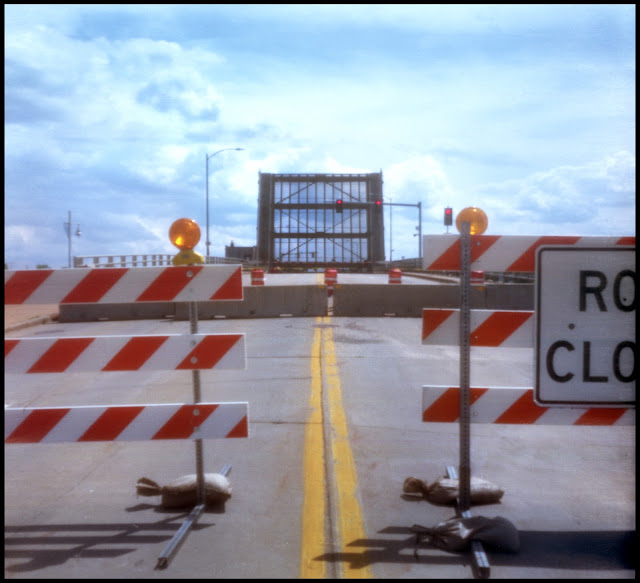 Color is a nebulous concept. Is rust a color? This garage-like structure is sided with COR-TEN steel with which the surface oxidizes in a special way so it prevents additional internal rusting. The style otherwise matches the very modern, grey and rectangular title company to the left. 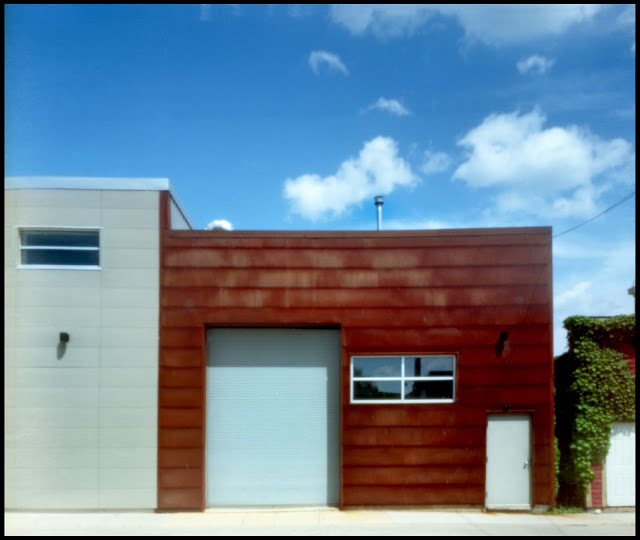 A much more vintage little building just to the right with an unusual fuschia paint job, unfinished door and window frames, and two different colors of address numbers. 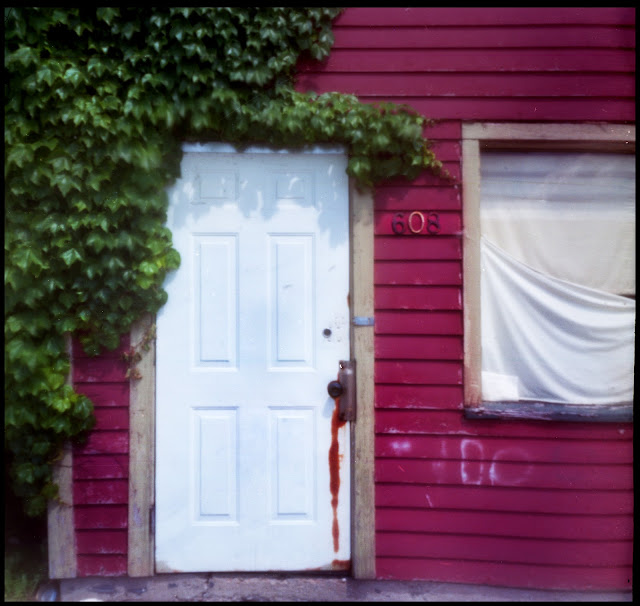 Is brick a color? My intention was to include the empty rust-colored planters which defined a courtyard, but in my obsession with the level camera, the bottom got cropped a little tight. The first block south of the river on Main has more well maintained historical structures before you enter the now-being-redeveloped industrial sawdust district farther south. This building used to be a fashionable clothing and gift shop and is now a photographer's studio. 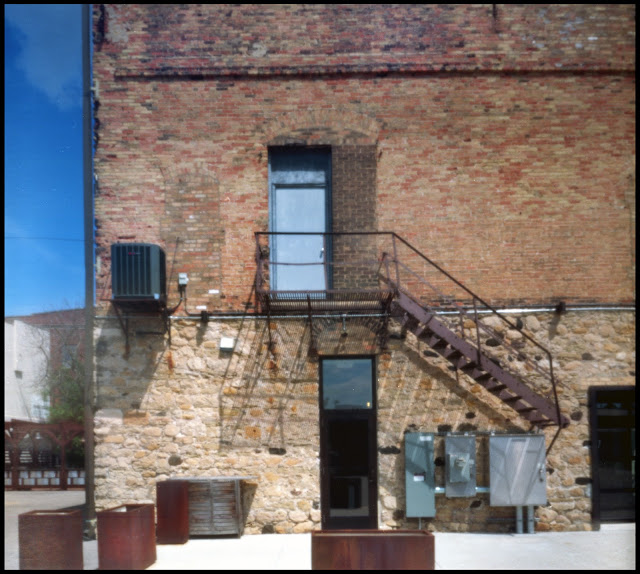 I was drawn to the green awnings, but now, seeing that bright strip of grass at the bottom and the green covering on one of the basement windows, it kind of has that creative color vibe. I wonder why the one window with shades doesn't have an awning? 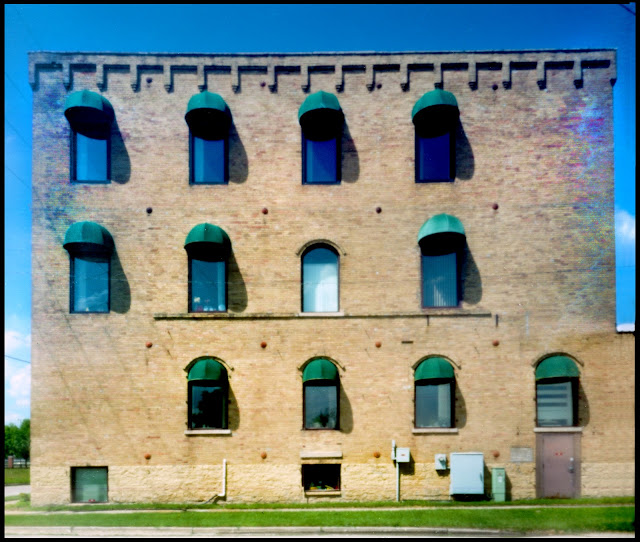