f295 was an international discussion forum begun and administered by Tom Persinger. Originally just about pinhole photography, it expanded into all kinds of alternative methods. It was active from 2004 until 2015 but it remains on-line. Recently it disappeared from the web for a few days, and that prompted me to decide to reprise some of my favorites here at Pinholica, for backup if no other reason.

On reddit in response to the Manic Expression Cubed post aperfectdevil commented: "That's a fantastic close up for pinhole work!!!"  It reminded me of this post in reply to a query about this topic. Getting close is easy with pinhole. You just get closer. However motion is exaggerated because it occupies a greater angle of your picture so you have to be careful to find motionless objects, work inside, or have an extremely still atmosphere.  Titled "Close up", it was posted almost an even decade ago on July 13, 2009.

Scott Speck started a thread in the Camera Making section a while back "Can one build a powerful macro pinhole camera?" 1:1 magnification was mentioned, and really crisp details. Thought I'd see if the Populist was such a powerful device. I didn't measure whether all of these were 24mm from the subject, as usual, I just eyeballed it.

First up was Spenser who must have been particularly exhausted from his daily comprehensive survey of all moving biota in the back yard since he held stlll through most of the exposure. Usually sitting a camera this close to his nose results in a more active inspection. 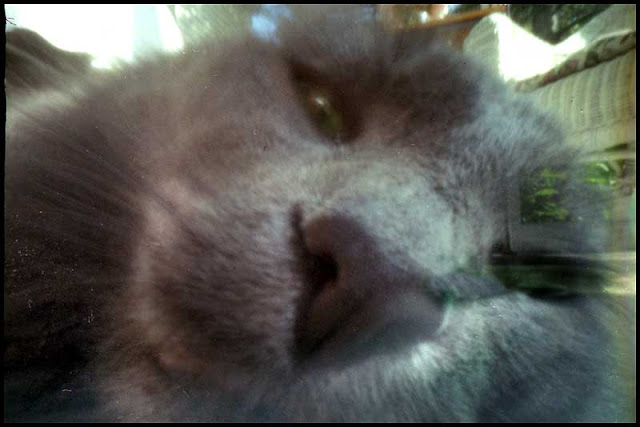 As usual, I had to cook. Here's the pepper grinder. 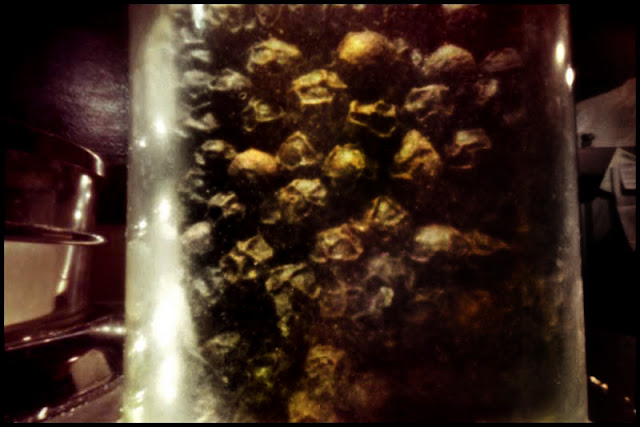 Garlic goes into almost everything I cook. 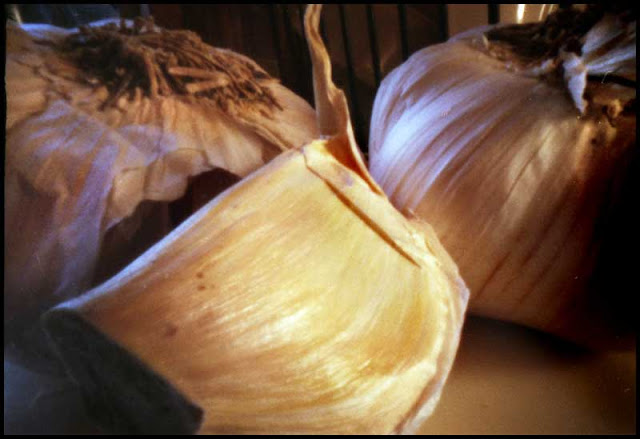 I was cooking pasta with shrimp and green beans. These were 31-40 per pound shrimp, so fit the 24x36mm frame of the Populist quite well. 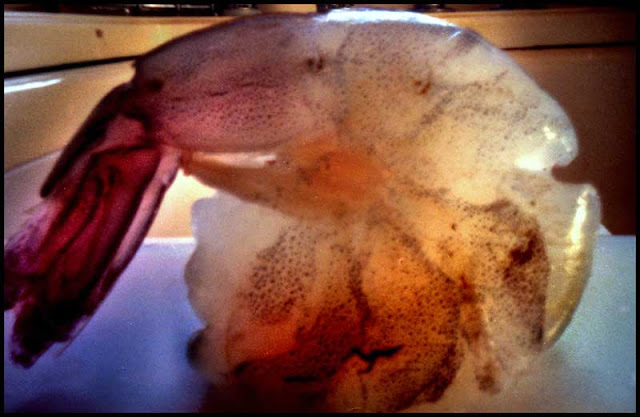 And close ups of flowers always have dramatic impact. The peonies on the dinner table. 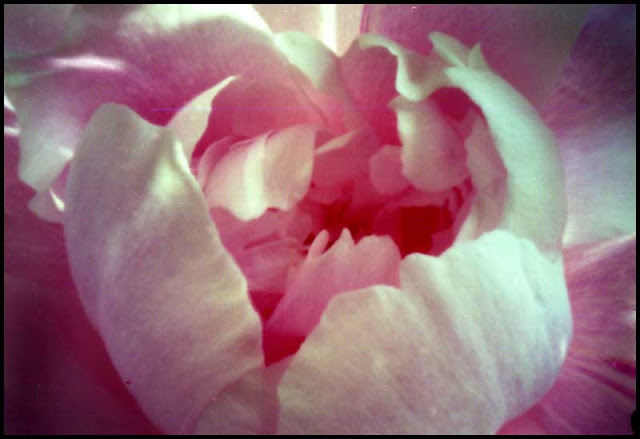 And one last, a little softer than the rest because the Clematis was still on the plant and I had to put up with a little wind. 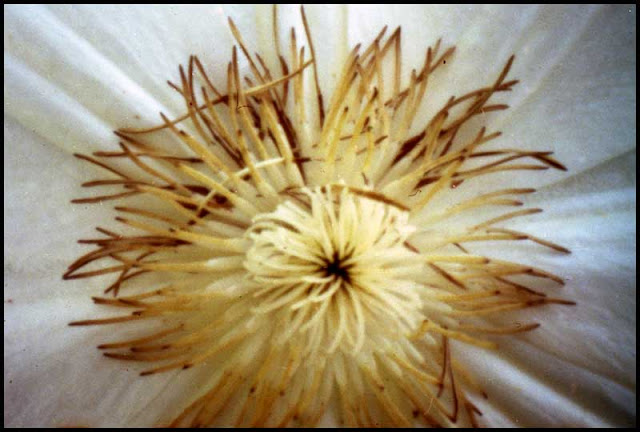 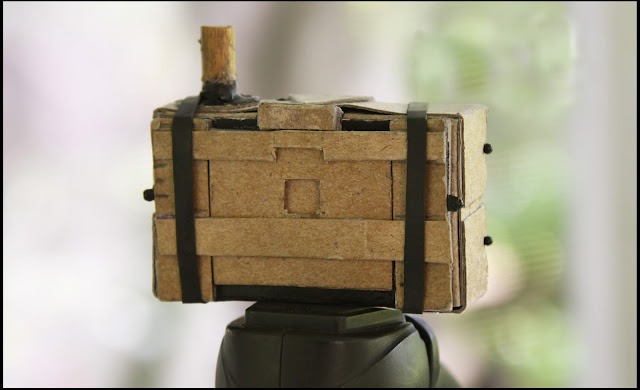 I threatened to make a 24x24mm format camera with a rising front during the waning days of my fit of manic expression this spring. If the pinhole is also 24mm from the film (the diameter of a 35mm cassette) that makes it cubic, which is geometrically satisfying.

It’s the same template as my other 35mm Populists except with 12 millimeters cut out of the middle.

Several things motivated making this camera. It’s the same length/format ratio I’ve liked with the Evil Cube. I’ve been rather infatuated with the rising front in the last year and recall wishing it were an option when on the road with the 35mm Populists. I’ve gotten kind of a renewed fascination with the quality of 35mm pinhole. A square format also means you don't have to bother to turn the camera on the tripod. Working with the Oshkosh Public Museum's collection of early 20th century cameras,  I had noticed that some of the smallest vest-pocket folders, using 127 roll film, had rising fronts.

There’s a healthy dose of internet contrariness going on here as well. In the last month I’ve heard 35mm pinhole described as a joke in a reply to someone who was inquiring how to do it. Another assessment characterized it as a source of terror because you might be faced with too many pictures, particularly with a “36” exposure roll, which might require Sisyphean labors to process and edit. There was also a remark that such a wealth of frames could lead to the kind of indiscrimate variations digital photographers are so often accused of.

If this camera were to be proportional to the Evil Cube, the difference between the rising and axial pinhole would be under five millimeters. (The Evil Cube is over twice as big and has 10mm between axial and rising pinhole.) My cardboard, glue and Xacto knife construction methods are limited in accuracy. With them that close together, could I make a shutter precisely enough that one pinhole was covered when the other was opened?

When I started this rising pinhole business, it made my head hurt to think about a pinhole that actually moved up and down. Then I realized that this winter I had made a shutter that rotated 360 degrees! It shouldn’t be that hard to make an actual rising front.

I ended up giving it 10mm of rise from the axial position. Mr. Pinhole says the image area is 46mm in diameter at this distance so the vignetting shouldn’t be too bad at full rise.

The problem with that moving shutter is keeping it light-tight. There is no real light seal between the sliding shutter and the camera body. The sliding part of the shutter just presses up against the front of the camera. I overestimated how light-tight that would be. You could see the sun shining through the gap. 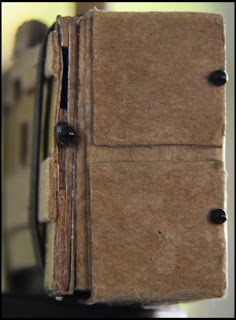 I added a few parts to reduce the vulnerable area to a minimum and to keep the slider under positive pressure against the front and that seems to have worked. The negatives show no evidence of light leaks. However, it had rained for a week and any sunny day was spent working in the garden. I did leave it out all day under a fairly bright cloudy sky.

If the pinhole is going up and down, you have to know where it is when you’re looking at it from the back. The actual sliding part extends the width of the camera and has beaded pins to indicate where the pinhole is.

Since there are 8 clicks for a 36mm wide frame and there is no whole number solution of 24/36 X 8, it will have to be 6 clicks per frame. Only thirty percent more pictures per roll of film. I’ll bet half the time I advanced the eight clicks per picture anyway out of habit.

I put the clicker on the supply side to see if that would be less touchy. It’s not.

It has a hand drilled .17mm pinhole.

Of course, the main use of a rising front is to keep your verticals parallel in a scene where otherwise you would be tilting the camera up. 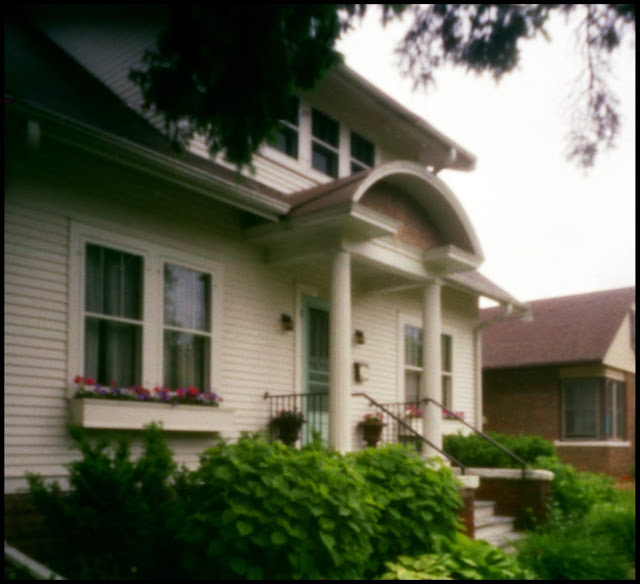 A tilted camera is not so noticeable with something odd-shaped like a tree but it's nice to have the buildings near the ground not looking like they're leaning backward. This one is at the maximum rise. There was some vignetting near the top but with a lot of pictures, that helps control an overexposed sky. 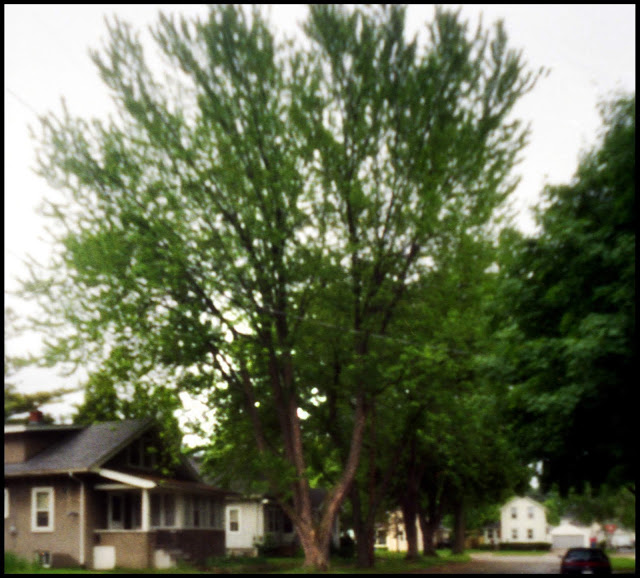 Occasionally out on the road, I end up supporting the camera on a water glass or something and can't tilt it up, yet I want a higher point of view.  Here again, that maximum rise. 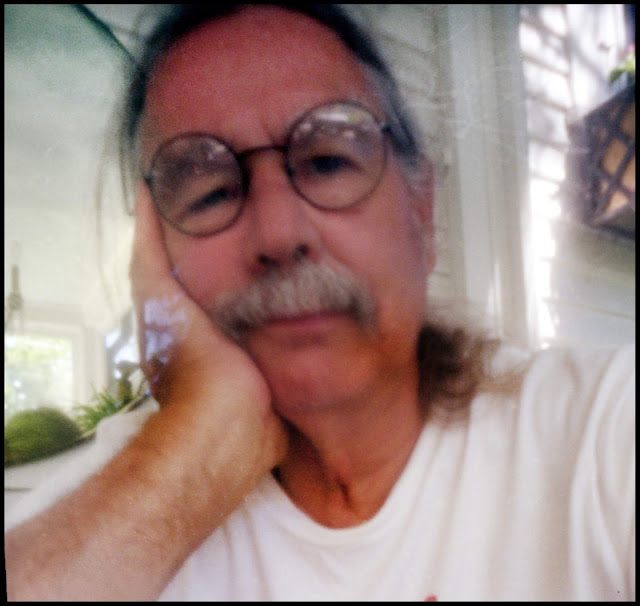 Sometimes the shift of that rising front can be handy even when you're not pointed up. I wanted to look straight down on my ugly feet without getting the desktop tripod legs in the shot. 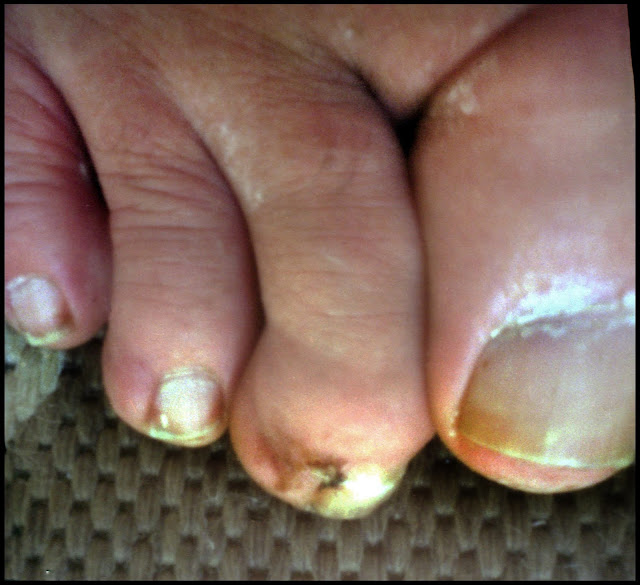 On one of those rainy days, there was a spell of a light drizzle and the pinholer's dream of absolutely no wind, so I was tempted into the garden.

It doesn't take much breeze to make a fern flutter. 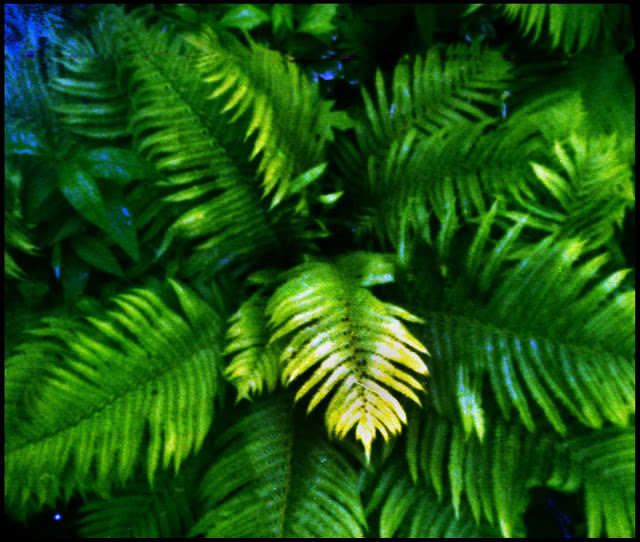 Peonies waiting to pop at the end of some long stalks. For those of you who are concerned that 35mm film isn't big enough for pinhole, this is a crop of about two-thirds of the frame. 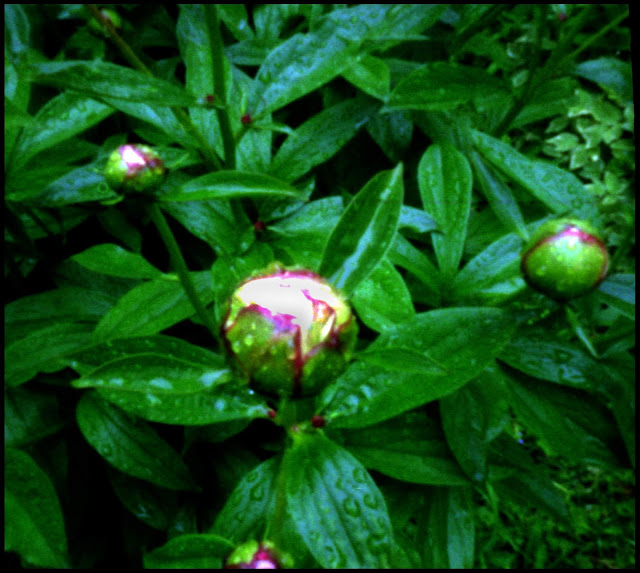 The weigela blossoms didn't wait for the rain to stop. 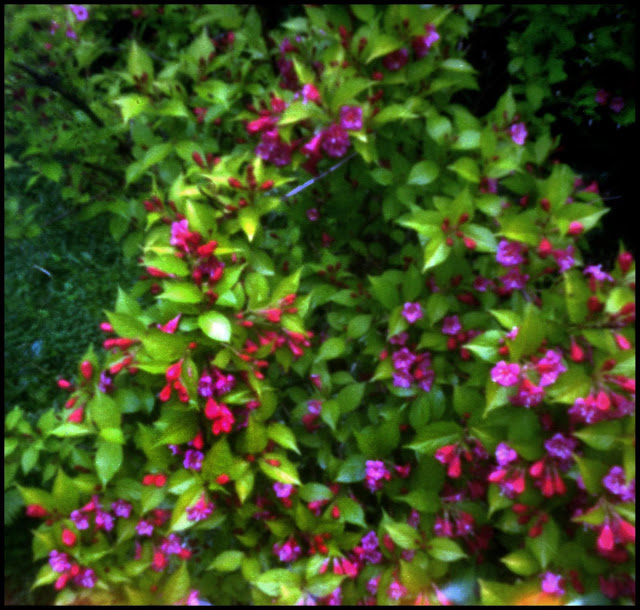 And a particularly trembly subject as close as I could get to it. 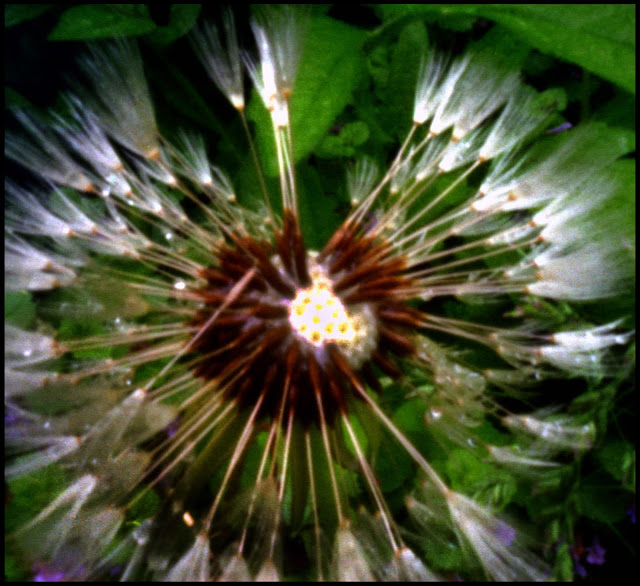 All these were with Kodak Gold 200.
Posted by Nick Dvoracek at 9:51 AM No comments:

An ignored roll in the Evil Cube

I mentioned in previous post that I had loaded the Evil Cube in early December but never quite got around to taking photographs with it. I don't really know why, this camera was one of my favorites last year. It's not like it was hidden in a drawer - it was mounted on a tripod next to the piano for the most of winter.

I finally used it during a snow storm in February. 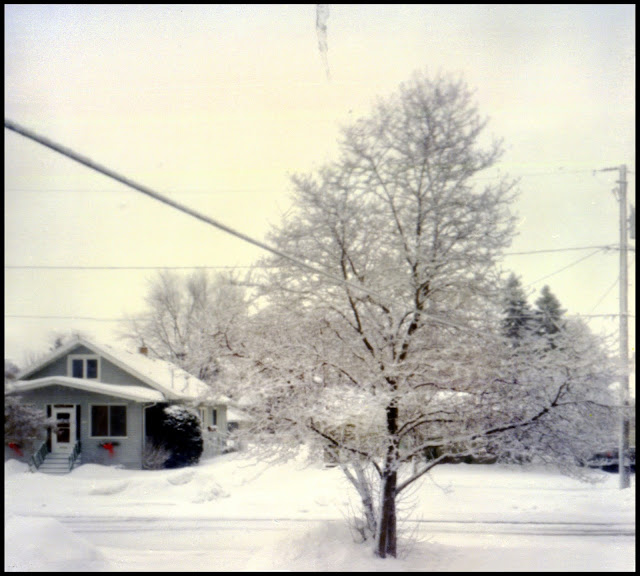 Immediately after this, I made virtually the same exposure with a 35mm Populist which started a three post manic fit. On close inspection you could tell which camera made which image but it's not immediately obvious.

During the winter bleakness, this flowering primrose was a welcome spot of color. 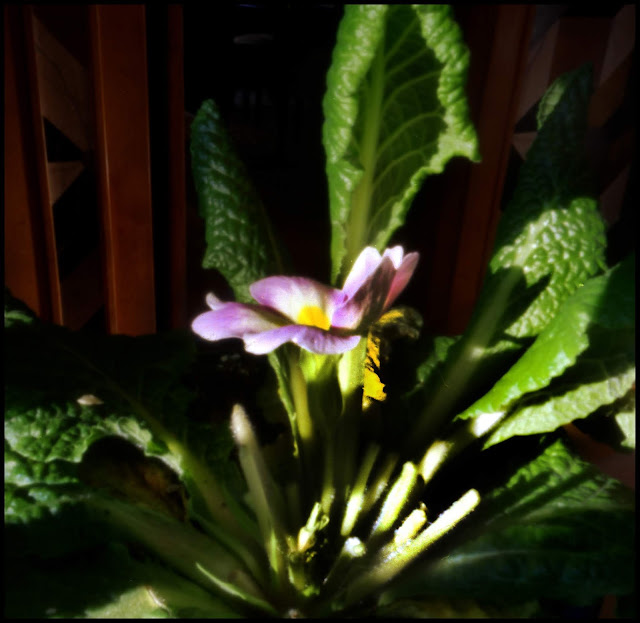 Sometime in March, I took it on a bike ride to catch the surf on Lake Winnebago. 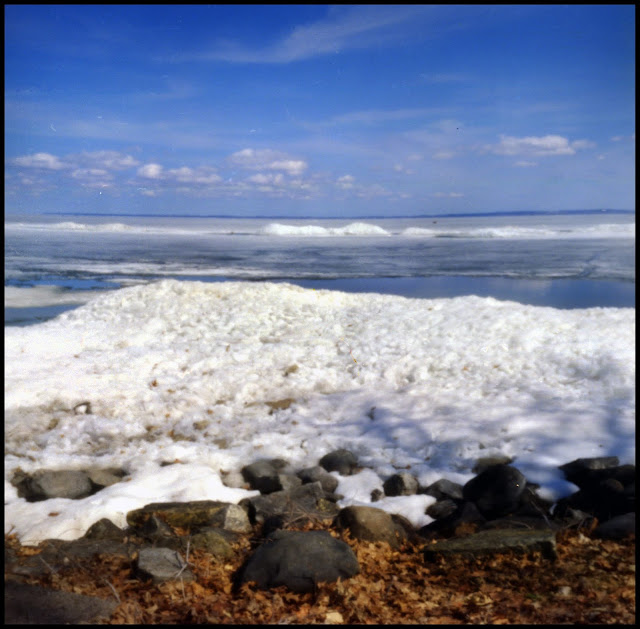 It came with me to Massachussets to get a portrait of the new homeowners. The yard slopes down to the street so the rising pinhole was necessary to get the framing I wanted. 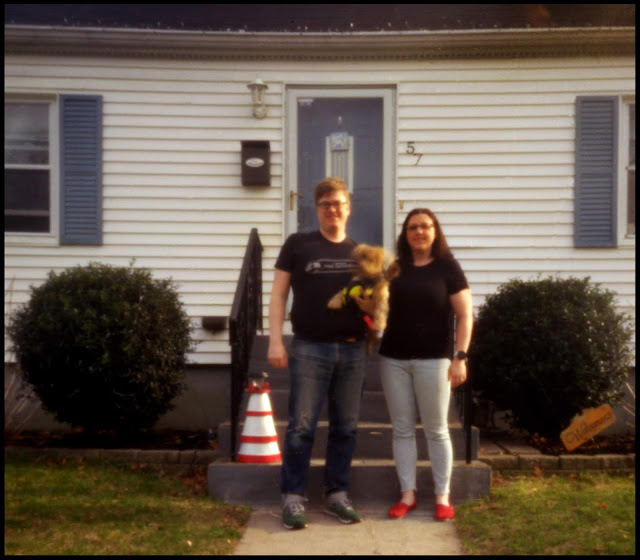 The back of the house also needed the rising pinhole to keep the fenestration rectilinear. I love the blue reflections in the tops of the upstairs windows. 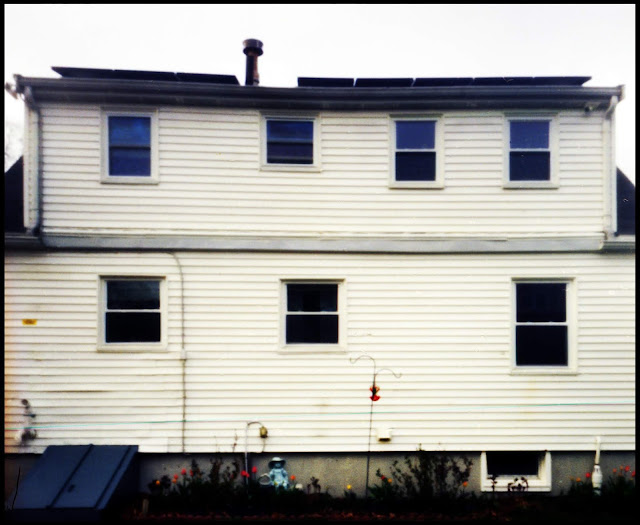 On Worldwide Pinhole Photography Day, before Sarah finished this roll, I did one insurance shot with this camera, lest something go amiss with the film in the camera I was using. It was my second favorite Pinhole Day photo. 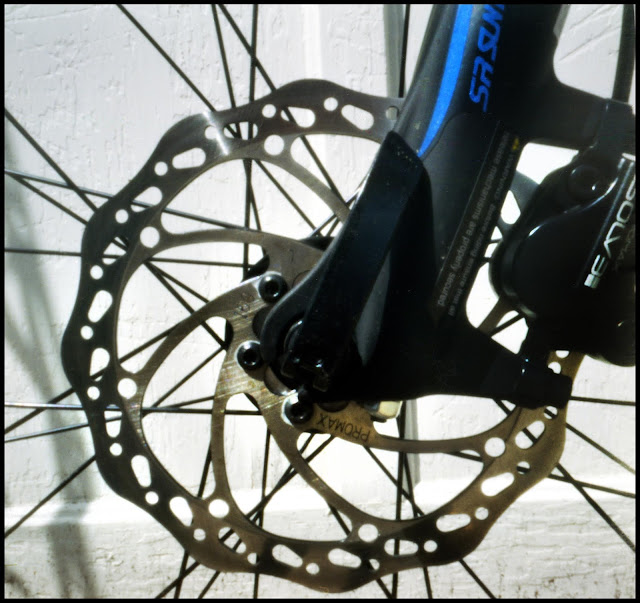