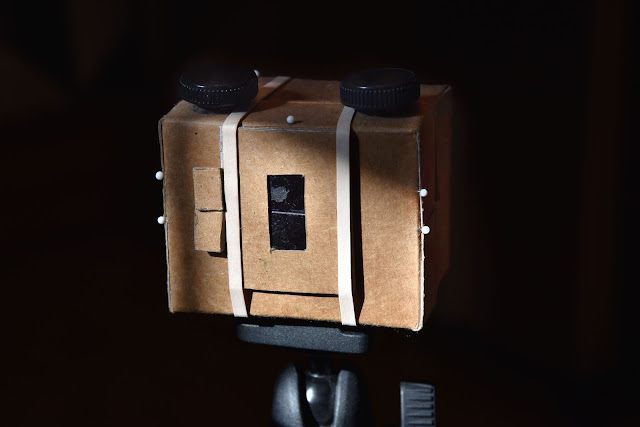 Regular readers may have noticed that the camera I've used most often in the past two years has been the Evil Cube (6cm from 6x6cm frame). I've used it for Worldwide Pinhole Photography Days in 2017 and 2018, it went to Massachussets for my son's wedding, and it was one of the two medium format cameras I took to Europe last fall. I chose it when I went out into a blizzard recently.

It was made from cutting pieces of flat matte board and taping and gluing them together, sort of figuring it out as I went along. When I was loading it for Pinhole Day, I wondered if I could make a template that would fold and glue together like my other cameras so anyone could make one. I think I accomplished it. Here’s a link to directions to build this camera.

There's really no technical need to design a new camera.  The image format is exactly the same as a 6cm 120 Populist. But there's the issue of form factor.  When I made the Evil Cube, and the Glenmorangie Evil Cube and Compact 120 before it, my inspiration was an unreachably-expensive-in-my-youth medium format SLR. (Never mind that it's sort of the same form factor as a million mid-century Brownies, Hawkeyes, and Pioneers. I never had one of those either.)  I've recently seen a forum thread where the NOPO 120 was gushed over for it's similar shape, so I'm not the only one with this obsession.

As long as I was making a new camera, I thought I'd see if I could improve a couple issues.

The classic winders for a 120 Populist are 3/8" dowels with the ends shaped to fit into the slot of a 120 film reel, with an opaque collar glued around it to reduce the chance of light leaks through the winder holes, and with a WinderMinder over the collars to keep the winders from falling out, itself held on by a rubber band.  The problem is that the diameter of the dowels is a little small to give much torque when winding and your fingers can get really tired gripping that little thing.  I've been glueing them into the plastic cap end of a cork bottle stopper which works really great, but then you can't put a WinderMinder over it to make sure they stay put. I make my winders really tight and put tape over the tab to make them tighter in the slot, and that works, but it's a little bit of a kluge.  And the WinderMinder is a separate part that could blow away when you're reloading in the field.

The other thing that I wanted to play with was the rising front pinhole.  I got kind of interested in this with the Pinhole Lab Camera, and I recently found out the Reality So Subtle cameras have one. Recently, trying to minimize the impact of converging verticals with Stella at the Public Museum and the Paine Art Center made me wish I had this option. This may be considered trying to guilt you in to staying around and looking at the pictures below, but I really like the rising front pinhole.

The camera is made made from four main folded parts.  The image chamber and the film holder are first glued together to make the inside assembly.  You have to do something to keep your film reels parallel or your film is going to jam up.  In the Populists, it's a box just larger than the film.  In the original Evil Cube with it's triangular space for the film bay, I inserted some cut off nails through the bottom, but those are little parts that can get got lost. The simplest solution to me was a double layered piece of cardstock, the same thickness as the flange on the film reel, glued where the reel would be pressed when the winder was inserted into the top and held there firmly when the camera is closed. That should keep the bottom of the film reel from wandering.  It seems to have worked. 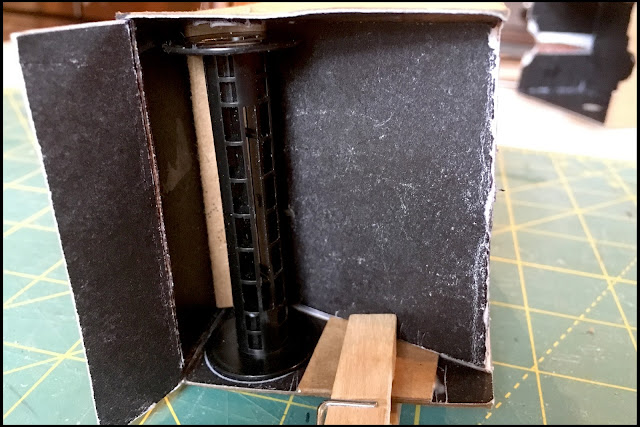 The film is loaded wrapped around the inside assembly. 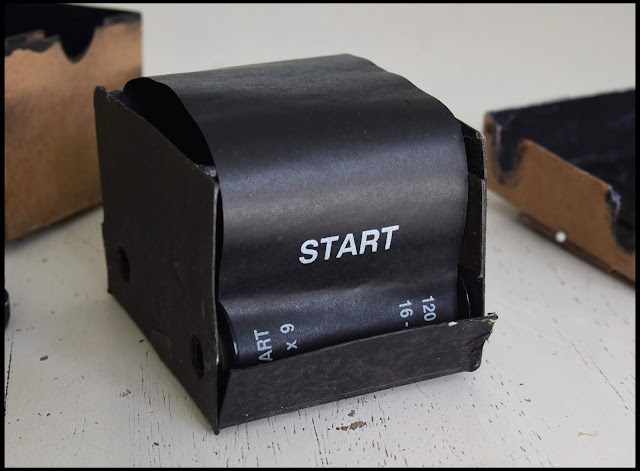 This assembly is then inserted into the back, and the winders are inserted throught the holes and into the film reels. 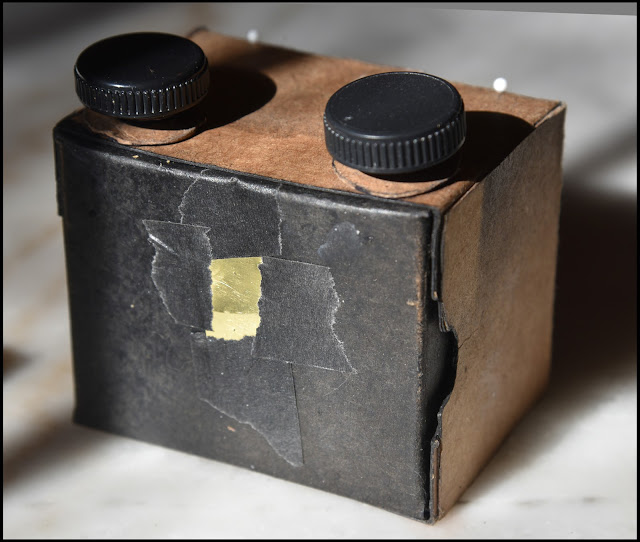 The front then slides over the back in a gap between a collar and a cork stopper on the winders, which solved the problem of the winders falling out.

For the rising front, making a a pinhole that actually went up and down is way too complicated for me, so I took the simple way out, two pinholes, one higher than the other.  It took me seven tries to get two identical pinholes at .3mm. I was a little disappointed to not get them a little smaller, but to entice you again, I don't think that's an issue with the pictures.

The rising pinhole is 15mm over the on-axis pinhole.  That was just a guess. It was far enough to make sure I could keep one covered while the other was opened. According to Mr. Pinhole, there's a 115mm image diameter at this distance, so I've got a little area to play with. It turned out to be a very useful rise, and I hardly noticed any vignetting.

For the shutters I just made one big really wide shutter, and cut the moving part in half. The over and under shutters open to the side, which ever handedness you prefer. 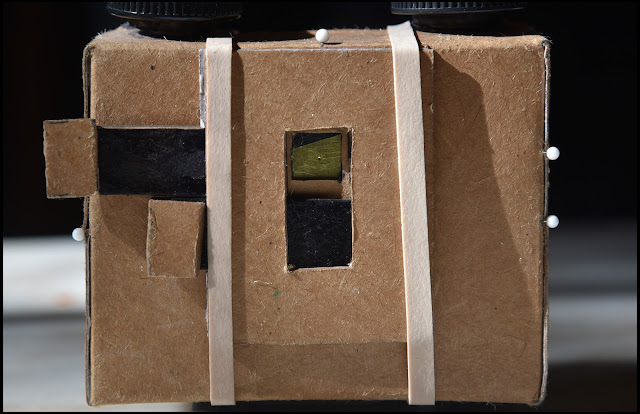 I really like the rising pinhole (or should that be The Risen Pinhole?)

All this is happening at f200, and moderately wide angle, 53 degrees. I think most people consider 80mm normal for this format. 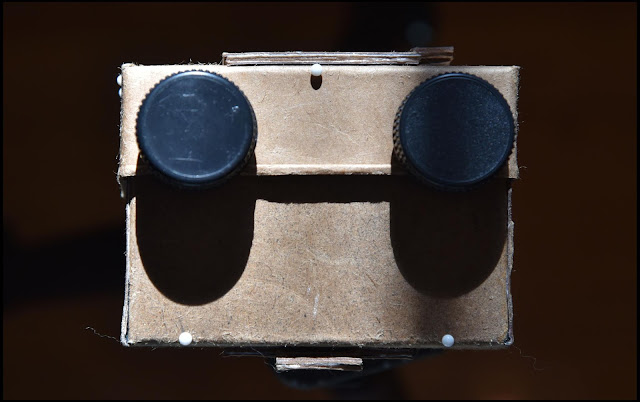 So as is my wont, I went for a test on a bicycle ride around Oshkosh. This was my first experience with TMax 100 as well.

You knew I was going to start with the rising pinhole. The stone clad modernish Evangelical Lutheran Church on Church Street is connected to what I think is their older clapboard covered church behind it on Parkway.  This is the joint between the two. 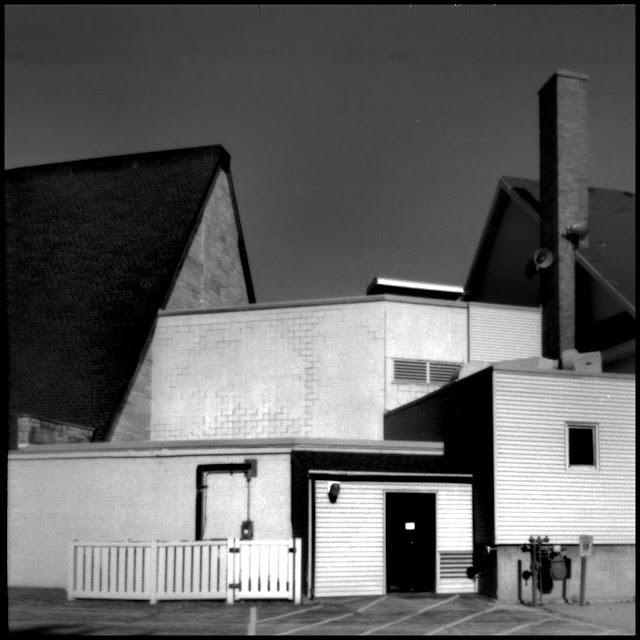 Turning to the left, the almost-third-quarter moon was just barely visible to the right of the bell tower.  Despite getting some grey scale to the blue sky, I can't see a trace of it in the negative.  Anyway, how about those parallel verticals, and there's a seagull sitting on the left pylon if you zoom in to full resolution. 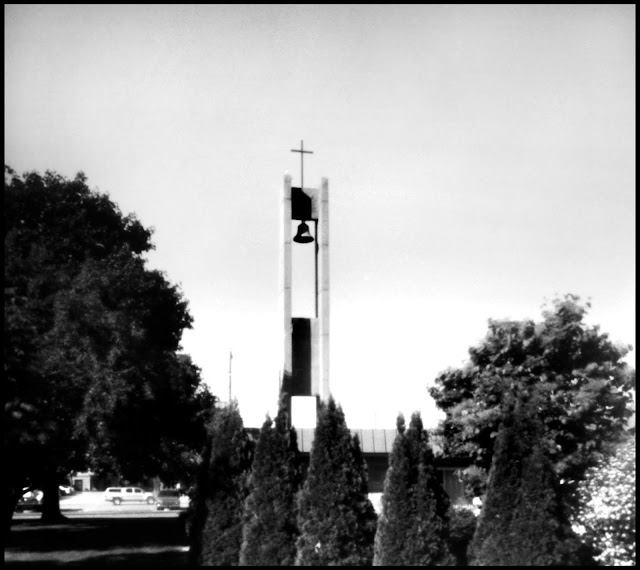 Next door, I couldn't get far back enough from the Morgan House to get the rising pinhole shot I wanted and kept getting the sun in one of the windows from that angle. So I thought, damn the converging verticals, I'll just point the camera up and use the on-axis pinhole. This is the only time I used it. Picked up a little flare anyway, and there's another seagull on the chimney. 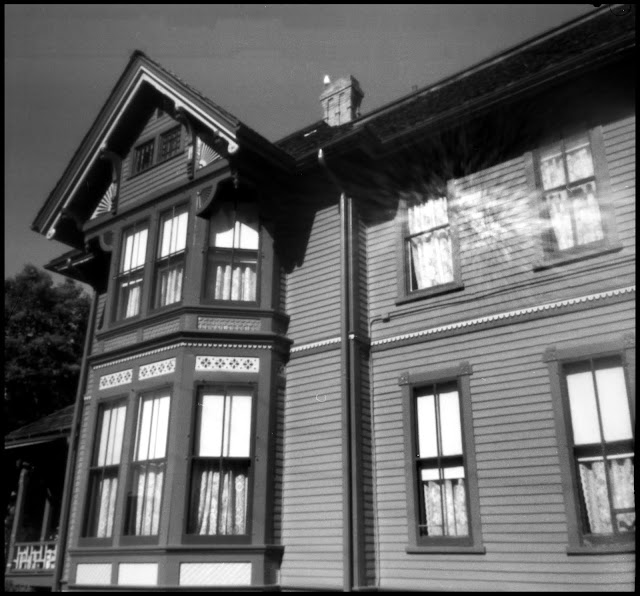 The Public Safety Building is an equilateral triangle. Do you think they engraved those lines in the walls just to challenge me?  I was surrounded by police cars when I took this. 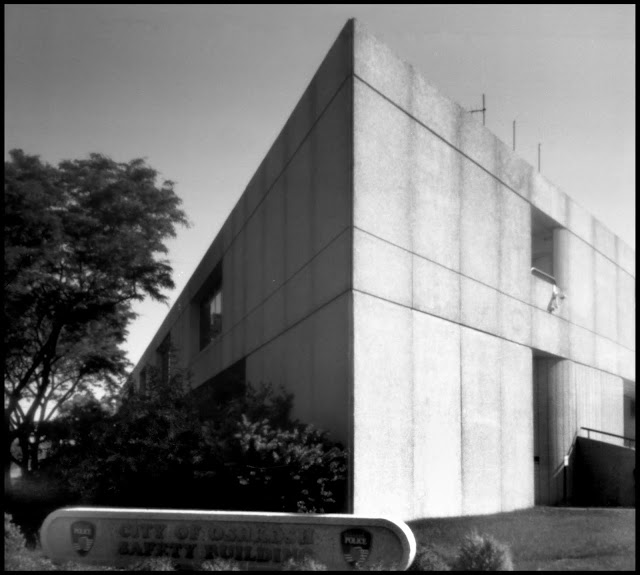 On the other side of City Hall, there's a hidden little courtyard with a table and bench between The Beach Building and a city garage, with this rather large tree kind of espaliered up the wall. 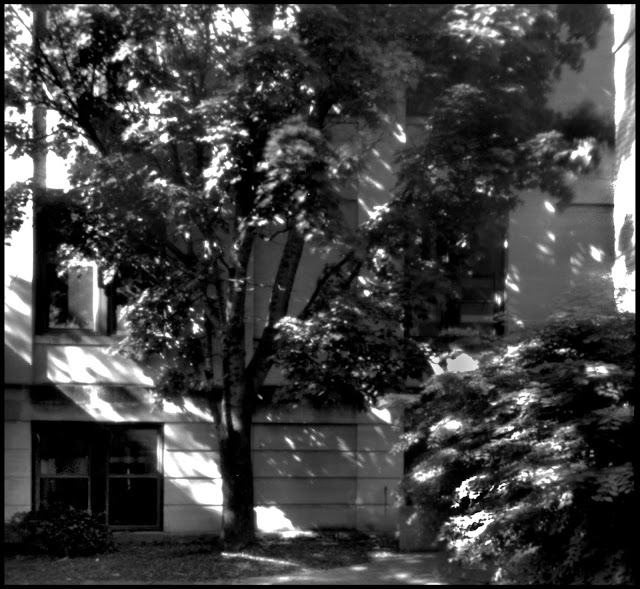 The back end of the Grand Opera House, with yet another seagull on the chimney. 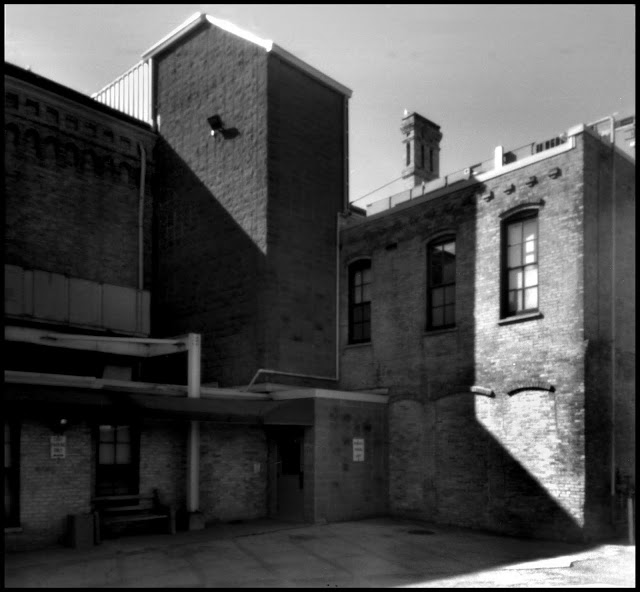 I've tried to photograph this wall of the old Miles Kimball Building several times. Using a wide-angle camera pointing up making it look like it's falling over really distracted from what I want to portray.  Now with the rising pinhole, here's the left side of the wall. 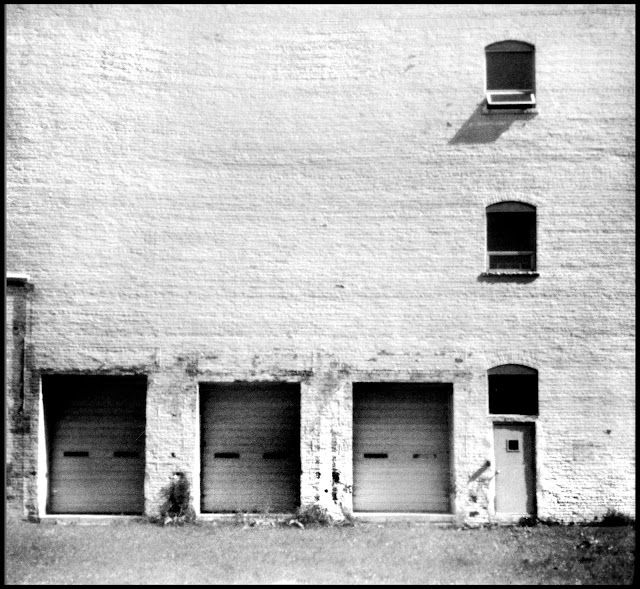 Using the sidewalk to make sure I kept the camera parallel, the right side of the wall from twenty yards down. 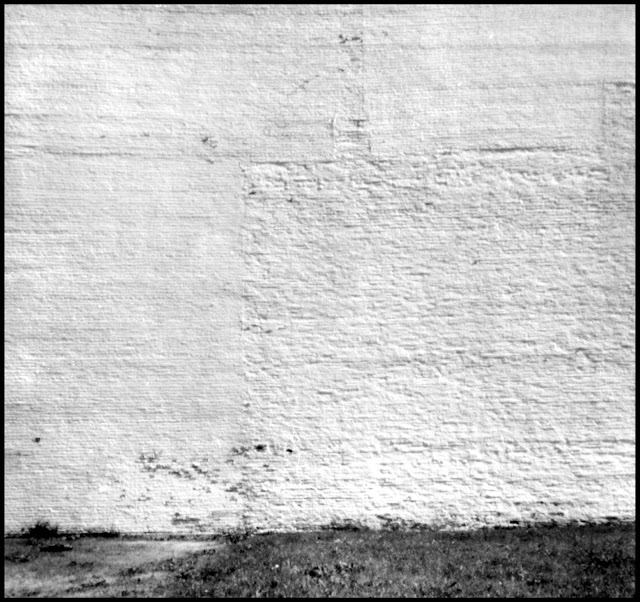 And here's the diptych you're trying to imagine.

Sarah had an interview here once and described the interior as Dickensian. They used to hire artists to do drawings as piece work from a photograph of someone's house to put on Christmas cards. They're going to renovate it into an apartment building with a restaurant on the ground floor and a bar on the top. That should be a good place to take pinhole photographs. Here's the front of the building from the empty lot across the street.  It appears I didn't make sure my film was tight and I got a bit of a curve to the horizontals toward the top.  It's kind of funny that I was trying to be pinholey by waiting until a white car made streaks going by, but the camera upstaged me with the curvy film.  This combination of the view camera correctness of the verticals with pinhole funhouse cracks me up.  It looks like the building has a raised eyebrow. 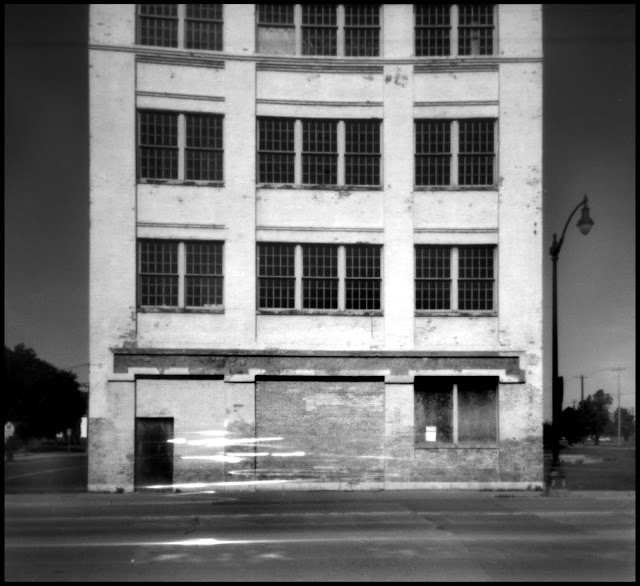 This is the new "Sawdust" development area where an arena was built for a Milwaukee Bucks minor league team. The city is hoping it will spur all sort of hip development in what is a pretty blighted area. It used to be the factory district and there are still a few industrial buildings active in the area.

Restoration of the area is going slowly. Just next door is this little brick building given a little bit of a Loony Tunes look by curved film again. 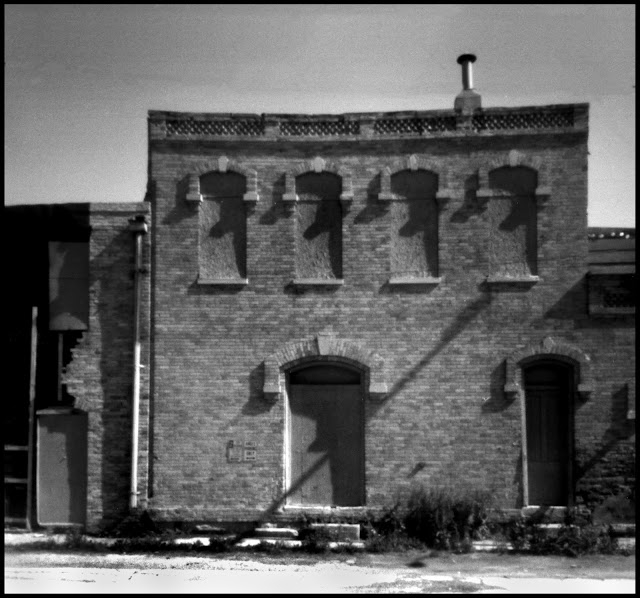 All with the new Evil Cube. two .3mm pinholes 6cm from 6x6cm frame on Kodak TMax 100 developed in Rodinal 1:50. Also with the Manfrotto Compact Advanced Aluminium Tripod extended out to it's full 66 inch height.
Posted by Anonymous at 3:43 PM