Stereo in the 6x9 Variable Cuboid at two pinhole distances. 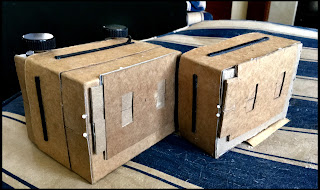 The image pairs from the 55mm stereo front for the 6x9 Variable Cuboid were unequal widths because of my clumsy craftsmanship. I thought the septum was slightly too long and it bent when placed on the back. I trimmed it and added some stiffening. There is now a bit of overlap but it’s easy enough to cover that with a big black stripe. These are set up for crossed-eyes viewing. Here’s a link to an exercise to learn how to do it.

A few blocks from my house, on a route I commonly use on my bicycle, was an abandoned factory, part of which was already torn down. In the last year they’ve been converting it into apartments. I was a little concerned right after they started because they covered all these windows with wood. They were reconditioning them and now they’ve got them reinstalled. While I was setting the camera up a resident who has the corner apartment came by and told me she’s very happy to have these giant divided lights in her living room. I can’t wait until they get the landscaping done. 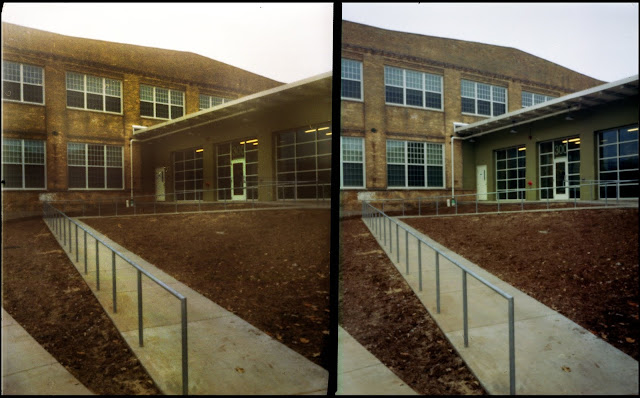 A foggy day at the north end of Miller’s Bay. 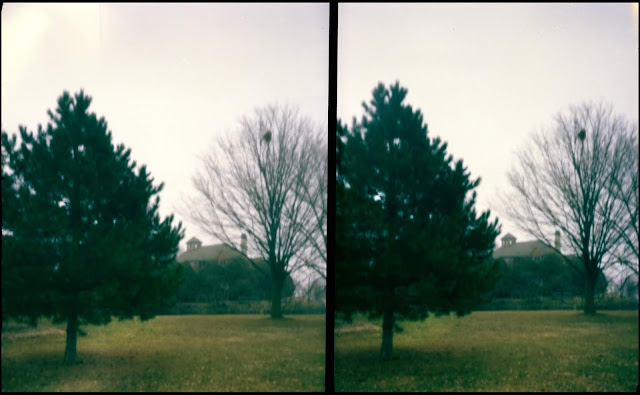 A classic theme - a door framed in another door. 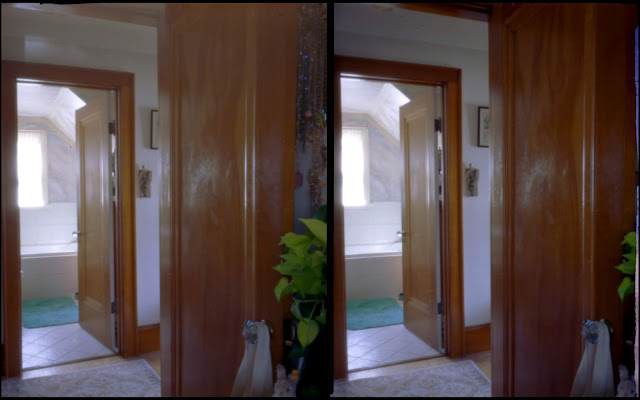 This is the best 3D effect of the lot. 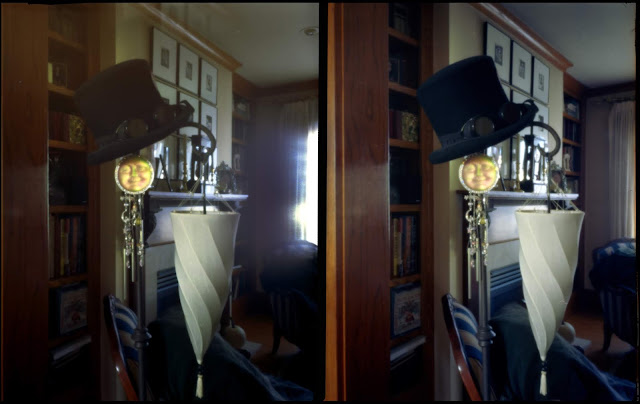 I photographed the eclipse in January with a 6cm long stereo camera and with a 3cm long normal camera. Maybe just because the wide angle single image was a better photograph, I found myself wondering what the extreme wide angle would have looked like in stereo. So, I built another stereo front at 3cm to find out.

Lately I’ve been taken with the silhouettes of these bare trees along Miller’s Bay and thought I’d try to see if I could capture the depth of the branches. 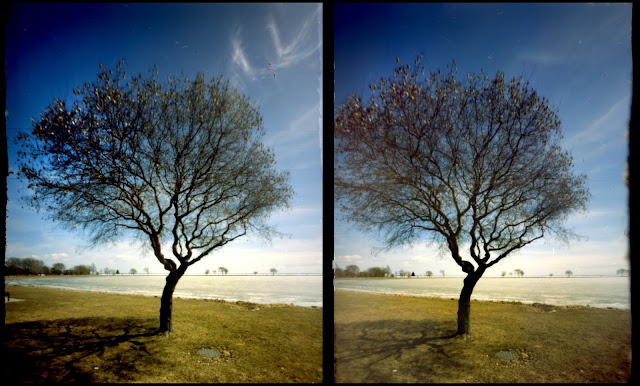 I put a rising front on it to keep things like these sailboat masts parallel. There can be a problem when you don’t realize how really wide angle the camera is. It sure does separate that accidental foreground object from the rest, though. 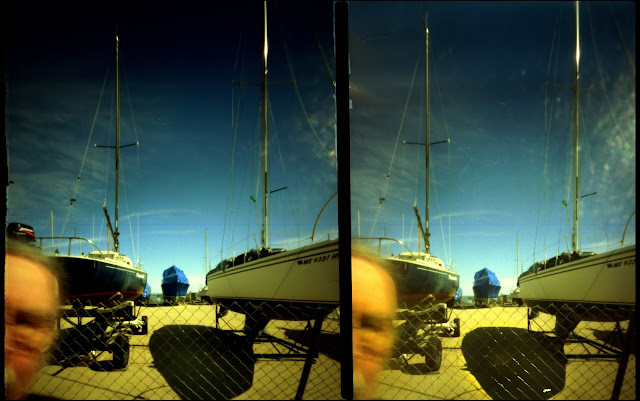 Again with the unequal width images! It turns out I also got the film gate a little wider than 6x9 with the extra width all on one side. Hand made camera ya know. Easy to fix with more tape.

Posted by Nick Dvoracek at 12:08 PM No comments:

Books, and a video

The Boston-based web site Don't Take Pictures periodically has an interview with publishers of photography books. When the question comes up of why they do it, the response always revolves around the fact that looking at photographs in a physical book with a unifying theme is a qualitatively different, and in some ways more enriching, experience than viewing them on screen. Sort of how making photographs using a pinhole and sighting triangles is different from doing it with a lens and viewfinder.

I had three rather technical photography classes in grad school for my Audio-Visual Communications Master's Degree, but almost everything else about photography I've learned from books. I spent my entire adult life working in college libraries and have covered nearly the entire TR classification in each one (Library of Congress call number system). I understand the attraction of studying pictures in a bound volume.

In case you feel that attraction as well, I've resurrected a couple books I put together in the past and assembled a new one. They're available on Lulu.com. Self-publishing is a little vain but it's quite pinholey to do things yourself. 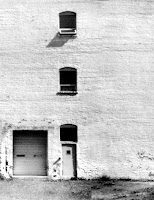 Behind Oshkosh is the new one, a portfolio of pinhole photographs of the backs and sometimes the sides of buildings in the town where I live. I made a lot of cameras last year and rode around town on my bicycle trying them out. To my surprise a coherent theme arose among those exposures. Toward the end, I was aware of what was going on but I never really started looking specifically for photographs of the backs of buildings. It's just the result of my trying to find the safest route on my bicycle on back streets, driveways and alleys. Backs of buildings are interesting to me because they're very often kluges of different architectural styles and technologies stuck together to make things work. They provide lots of shades, shapes and textures to use to play with light and composition. 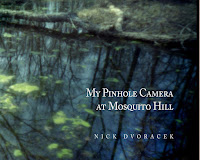 My Pinhole Camera at Mosquito Hill. I put this together in 2013 to accompany an exhibit of photographs in the visitors' center gallery at Mosquito Hill Nature Center. The hill looms above the lowlands and oxbows of the Wolf River and includes at least five separate ecosystems. It's a place I've been visiting since 1985 but didn't take pinhole photographs there until I made the 35mm Populist in 2008. It's now expanded to include images I've made up to 2018. The title is an homage to Edward Weston's My Camera on Point Lobos. 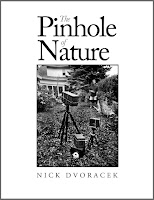 The Pinhole of Nature is not just an homage to the title of an earlier work – it's blatantly modeled after William Henry Fox Talbot's great explanatory work The Pencil of Nature – 24 photographs and a few paragraphs about each one. It's my take on the famous questions "Why pinhole?" "What pinhole?" and "What-me-pinhole?" I wrote it in order to have something to talk about when I was asked to make a presentation at the Minnesota Center for Photography's Annual Pinhole Photography forum in 2003 and went a little overboard. It holds up pretty well a decade and a half later but I think the author would have been pretty surprised to see how all this developed into Pinholica.

My position in those libraries was an audio-visual specialist. I would be remiss if I didn't acknowledge that some people would rather watch a video. In 2008. I was asked by a colleague to explain pinhole photography and it's attraction to the Oshkosh Southwest Noon Rotary. This a live recording of the presentation.


Posted by Anonymous at 7:03 AM No comments: