I guess the warm and wet summer we had has something to do with it, but there seems to be a bumper crop of mushrooms at Mosquito Hill.  I was going to try to look them up and identify them, but there's over 600 varieties native to Wisconsin.

Stopped at the bottom for the slope that goes all the way to the top, and only after seeing the film, noticed that there were a bunch of mushrooms in the right hand foreground. They seem to favor clustering around the birches. 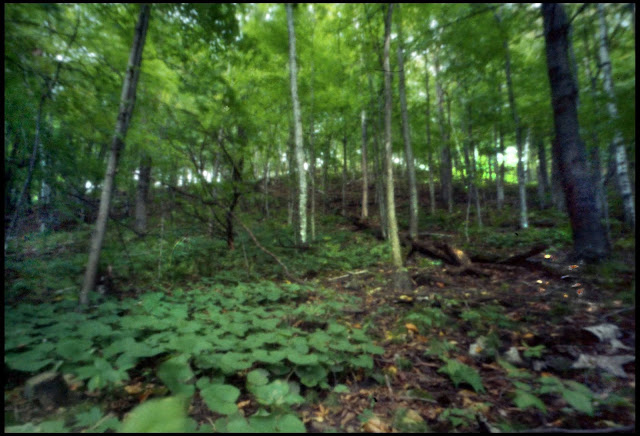 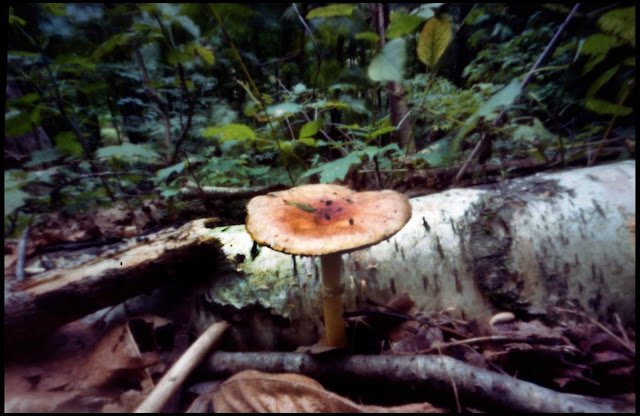 A group of toadstools with more dome-like tops. 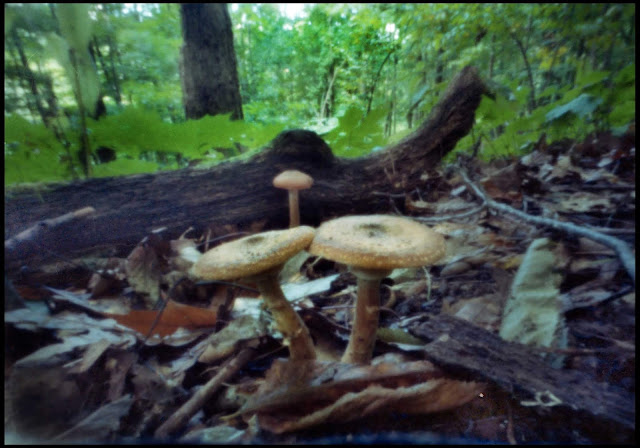 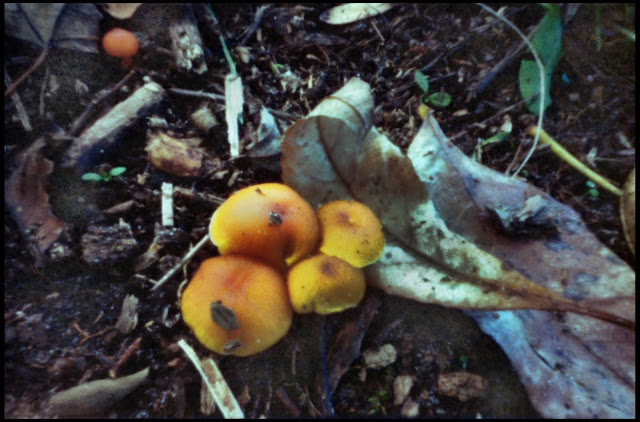 We haven't been to Mosquito Hill as much as usual this year, but this is the scene near the double birch on the north path I picked last spring to follow through the seasons. 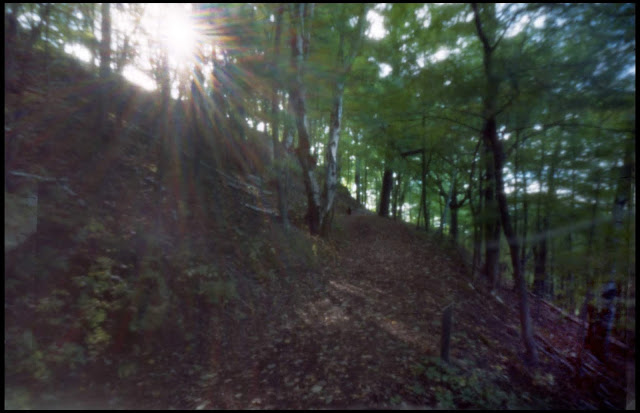 And it's partner looking down the path 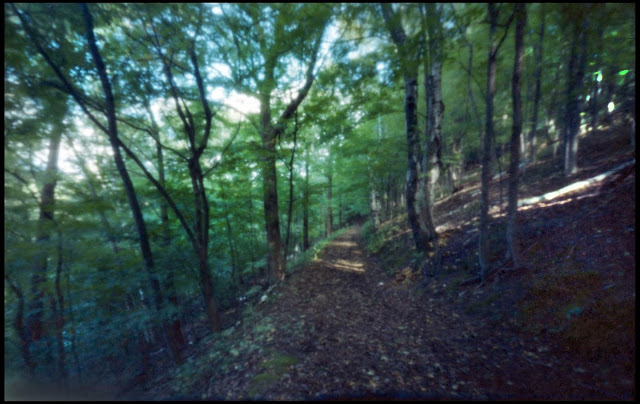 The double birch featured in these scenes was the location of one of the more spectacular fungulous displays. 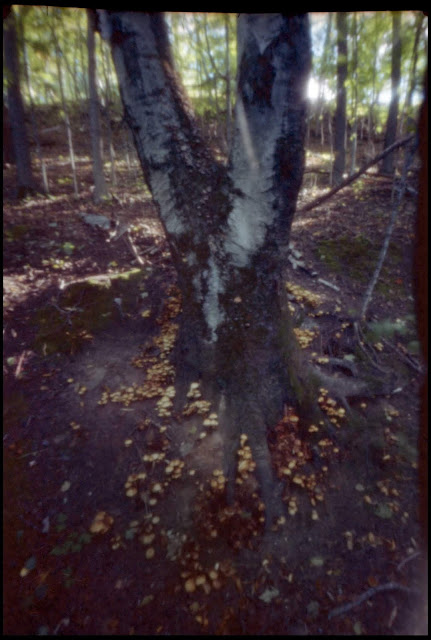 There were cascades of these things all over the place. 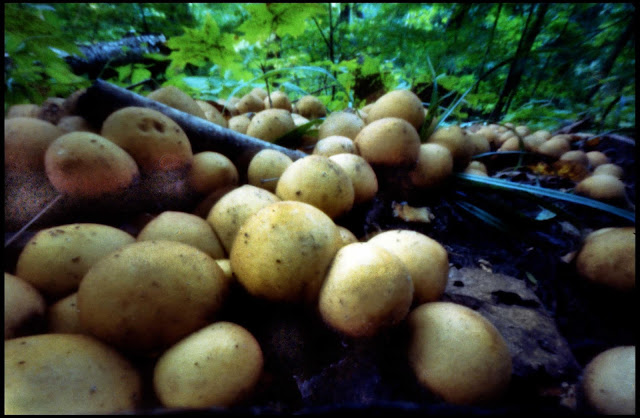 Probably the most impressive was this wiggly stripe across the path. 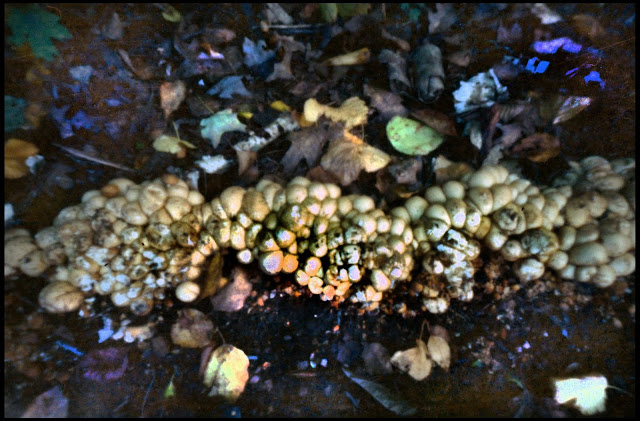 This was about the biggest of these shelfy things. 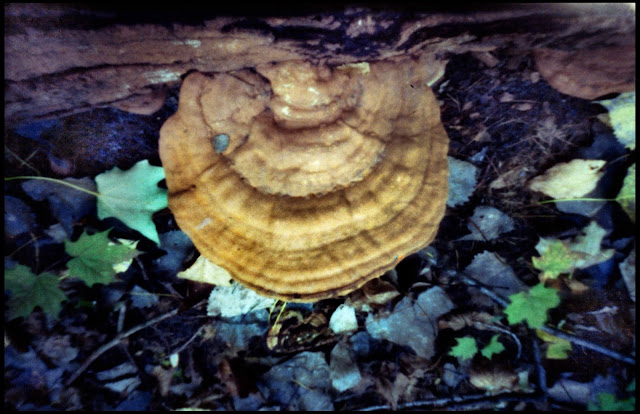 We encountered this rather large puffball in the meadow. (extra pinhole points for footography). 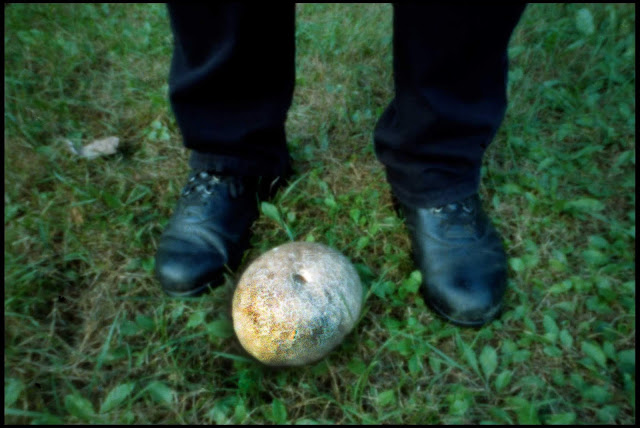 In other news, one of the old guys is looking a little late-Octoberish. 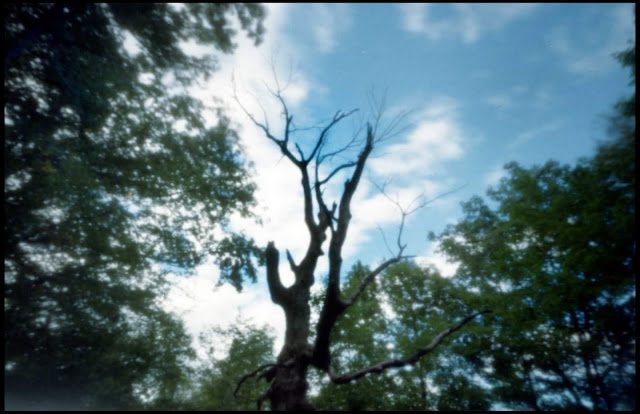 But there were some hangers on from the angiosperms.  These little purple asters are extremely tough and don't go away until they're under the snow. 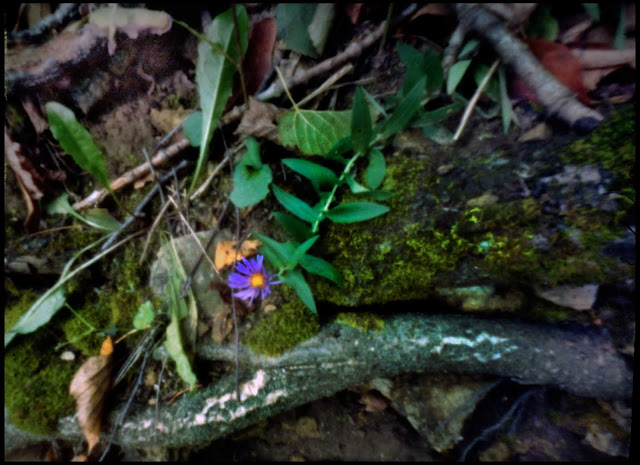 The yellow flowers in the prairie are starting to get really crazy looking. 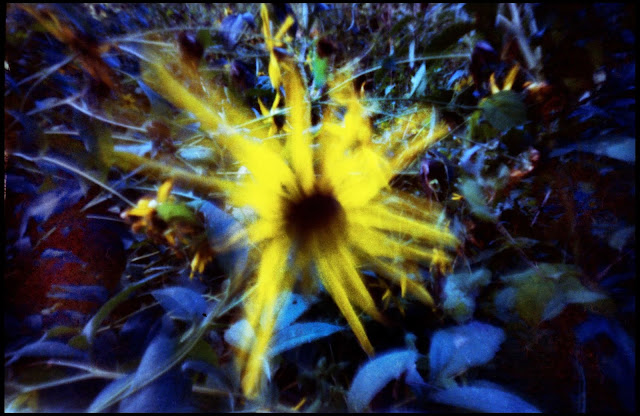 The oxbow is beginning to get a tinge of autumn. 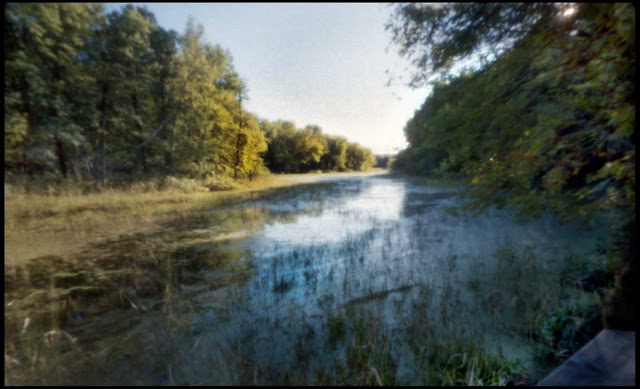 And the frog pond, abstract as usual. 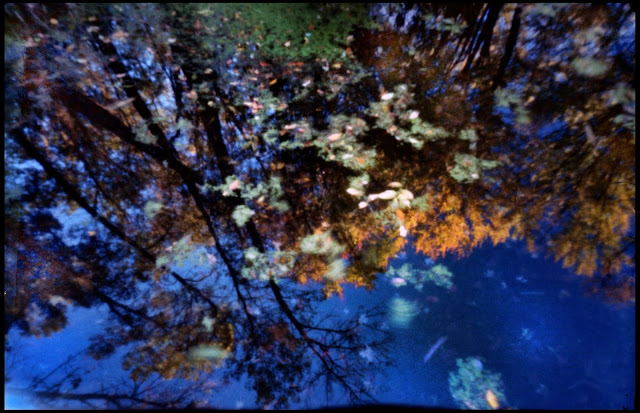 Left alone with fruit and vegetables.

I recently burned the onions when I wasn't paying attention a couple times, so I've been making sure I stayed in the kitchen and watched them while they cook.  There's also been a lot of produce around, this is right next to the west window of the kitchen and lately this happens just before sunset when the sun is streaming in, and of course, there's usually a pinhole camera sitting on the kitchen table.

It all started with this odd arrangement on an ear of corn. 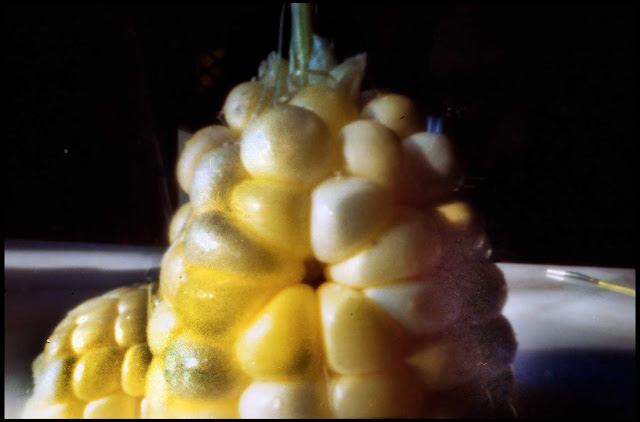 Of course a lot of this produce is getting chopped up with some extra left over. 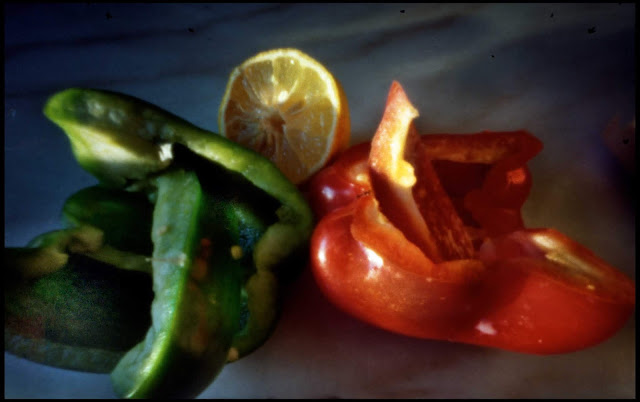 They come in all sizes and colors 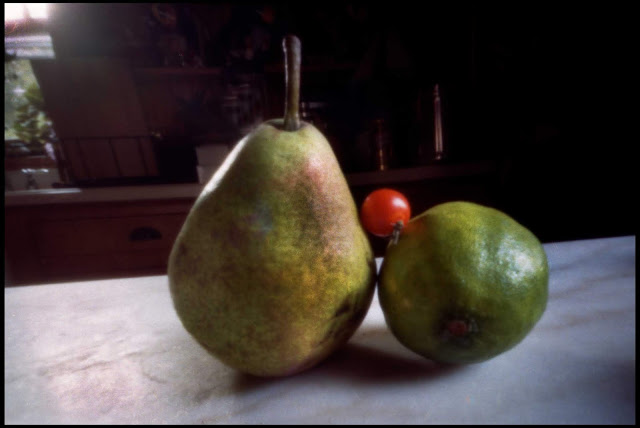 You can photograph them from either side. 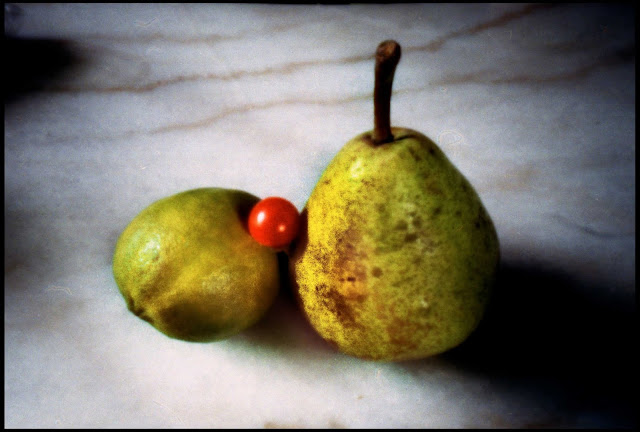 They often sit in this bowl for a while. 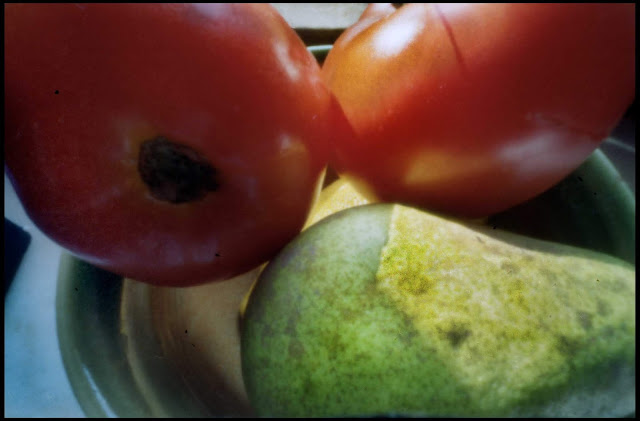 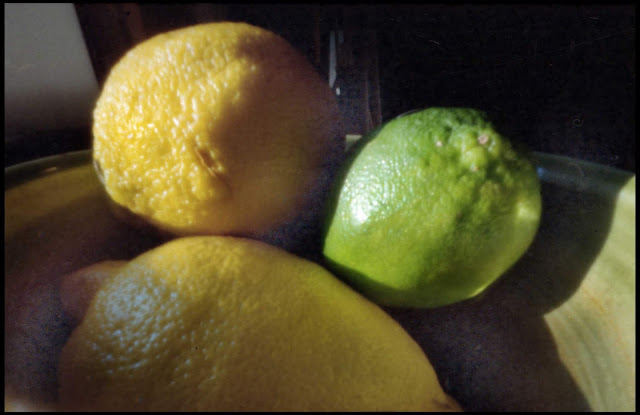 And some you have to handle very carefully. 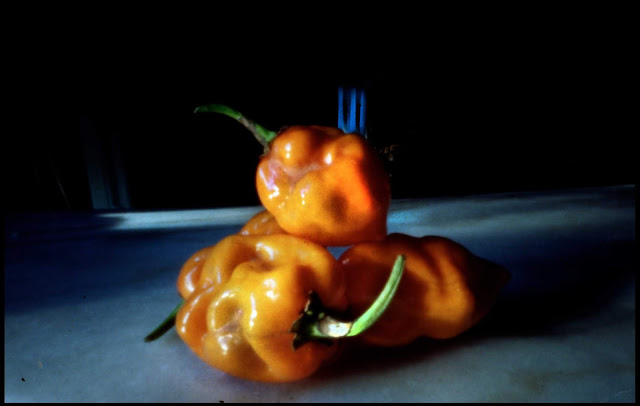 A Populist for Oshkosh

I ride my bike around Oshkosh a lot, and the primary impression is that it's really flat. The chamber of commerce emphasizes that Winnebago is Wisconsin's most level county.  On top of that I doubt that there are more than 10 buildings that are more than three stories high. So it seemed to me that a Panoramic camera of some sort might have some utility.

I've done this before.  A few years back on f295 someone posted about a camera they had made with a dominoes box with a format of 24 x 96 mm. I don't remember the distance to the pinhole, but it was fairly short.  So I made a Populist at 24mm with that 24x96mm format.  I occasionally got a picture with the full format, but mostly the image only covered about 72mm before fading to black. 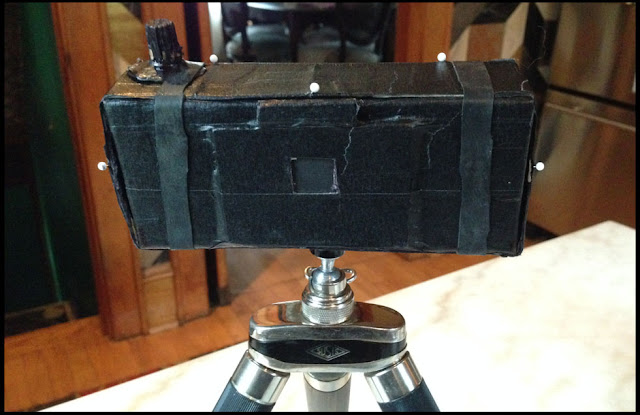 This time to increase the image coverage, I increased the distance to the pinhole to 35mm, and made the format 24x72 mm. Mr. Pinhole says it only covers 67mm, but with burning and dodging, I thought I could get a fairly uniform exposure all the way out to the end.  It covers a hair over 90 degrees.

Instead of the folded internal structure, I just made two little boxes attached to the ends for the film bays, raised up to the height of the camera with a couple pieces of foamcore.  I put foamcore on the top and bottom of the image chamber to keep it stiff. But otherwise it's a Populist.  Again, I hand drilled a pinhole, this time .26mm.

The first roll through, the clicker failed and I overlapped most of the images.  I've often mentioned that the clicker was the trickiest part of making a Populist. It can only extend above the divider about 1mm or it just folds over when you push the back of the camera on. It occurred to me that I could put a piece of card stock in the back of the camera with a little cutout to give the clicker a little more room. That seems to have worked. Funny story: When I went out to test the camera it was sunny and I needed a piece of black card stock to cover the pinhole with until the camera stopped moving from opening the shutter with these short exposures.  I just picked up an old piece from the workshop cameras and cut off a bit with a scissors.  When I went to make this layer for the clicker space, this piece turned out to be exactly the right size!  (Not exactly Ripley's Believe-it-or-not, I guess)

I only got several blocks from my house before I found an appropriate subject: the apartment complex at Fairacres which has one of the the storm water runoff wetlands behind it. This is only the middle about 60mm of the image because of the overlap problem.

Got the full frame with these doors at the partially torn down factory next to the railroad tracks, but it was kind of overexposed and there was some flare from the sun just over the roofline.

About the best was the north wall of Kolf Sports Center.  I specifically chose the composition because of the dark tree in the center and the relatively bright walls and lawn that would reduce the vignetting somewhat.

I was trying to keep the camera level not only horizontally, but also up and down, but setting up at the edge of a busy street to photograph the offices of Meritor Corp, I guess I pointed it up a little.  (This plant was where North American Rockwell began.  They no longer have anything to do with it.  It's still an active heavy industry plant right at the edge of the University)

I think this camera has some potential and I've got it reloaded and ready for another bike ride.
Posted by Anonymous at 10:28 AM No comments: