Neville in town and country

Four and a half years ago we saw an exhibit at the Institute of Contemporary Art in Boston titled The Visitors. When planning this trip we looked up what was on at the ICA. The Visitors was being exhibited again as part of a show of selections from the permanent collection. It was worth another visit.

Instead of driving into the congested Seaport we parked at the Quincy Adams station with it's monumental parking structure. We rode in on the Red Line along with a group of cosplayers fully costumed and painted for an anime gathering. 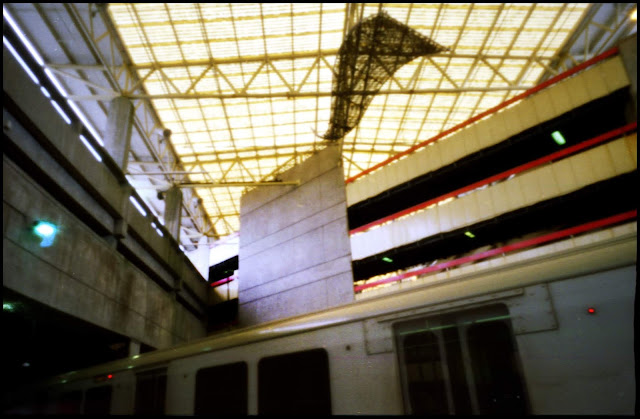 The ICA is located right on the harbor. The tall ship, Stad Amsterdam was docked just down the quai. It looks like a 19th century clipper but was built as a replica at the turn of the millenium with a modern steel hull. 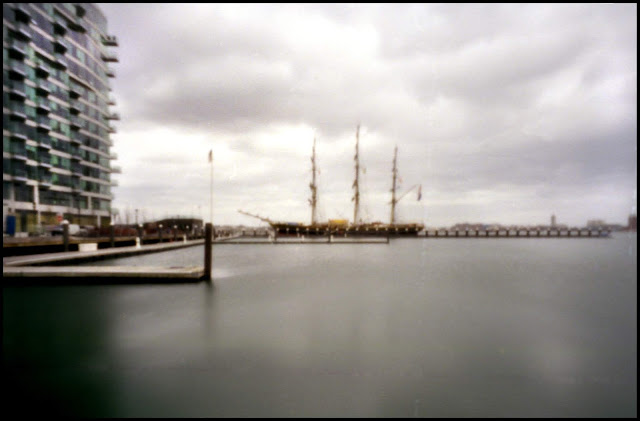 The piece we had come to see is an oddly mesmerizing hour-long, nine-screen video installation. On each screen are musicians, who are spread around a stately old house overlooking the Hudson River, playing a bluesy tune. You hear each performer through their own speaker so the balance and the environmental sounds change as you walk around. When I first saw it I thought they were repeating the same verse but this time I heard there were several sections including one of my new favorite philosophical quotes: "There are stars exploding around us. There's nothing we can do." For a few minutes Andy was sitting on the only bench in the room with just enough space at the end to set Neville down and open the shutter. You can see three of the screens. At the left is a cellist wearing a plain slip in the hallway at the top of the stairs. In the center, out in the middle of the gallery, is an electric guitarist with leather pants and bare feet, at a desk in a booklined study. On the right is the composer/artist Ragnar Kjartansson playing acoustic guitar soaking in a bathtub.

The fourth floor galleries are cantilevered over the harbor with a glass hallway on the outside. 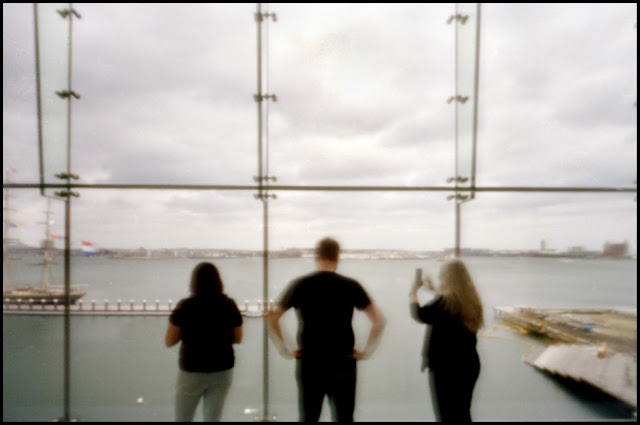 Lunch was at nearby Gather with a view of the shiny new buildings in the neighborhood of the ICA. Except for the museum itself, this view would have been completely empty when we were here the last time. 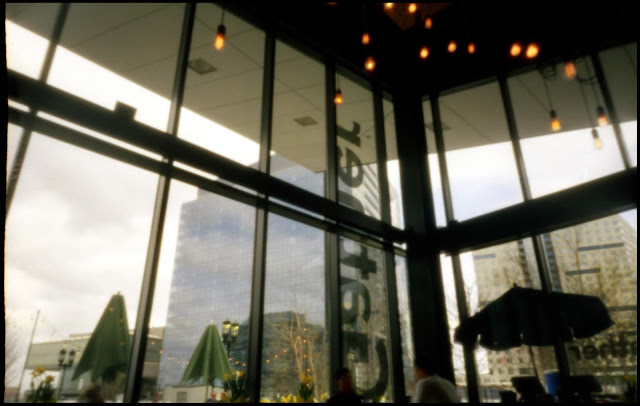 They have an unobstructed view of the harbor as well. 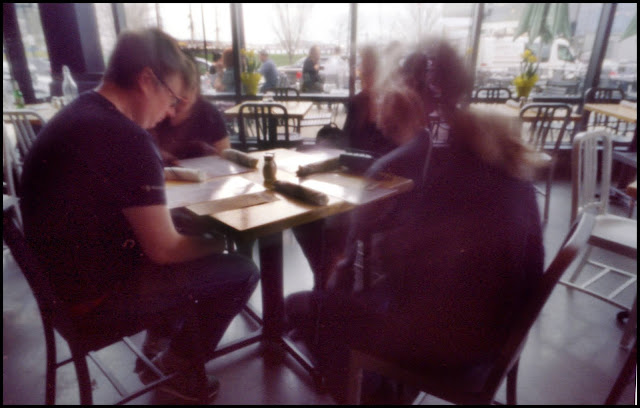 It's the kind of a hip, farm-fresh place that serves appetizers in these little galvanized buckets. 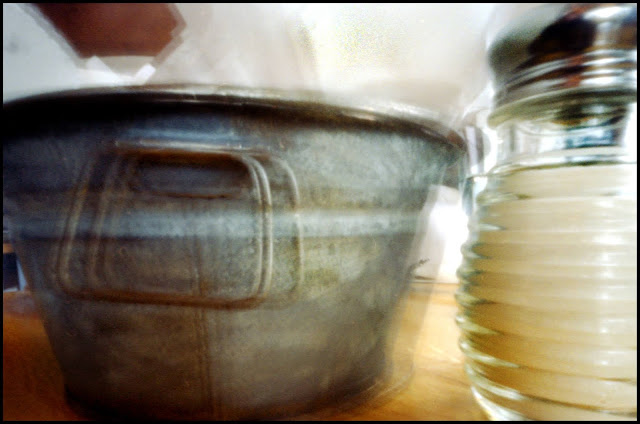 I had the salmon tacos. I didn't mean to look so impatient while taking this photograph. With all the giant windows, the exposure wasn't that long. 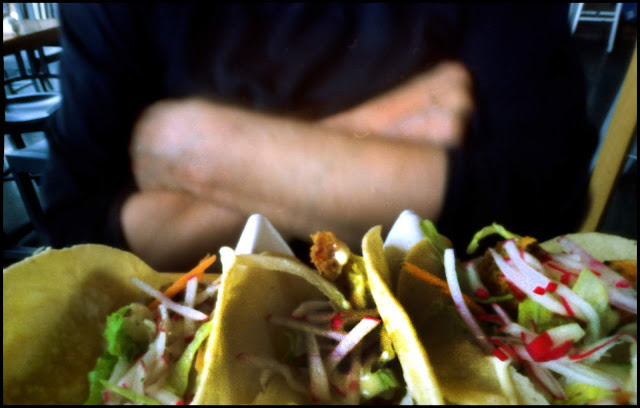 We walked back to South Station along the Harborwalk. 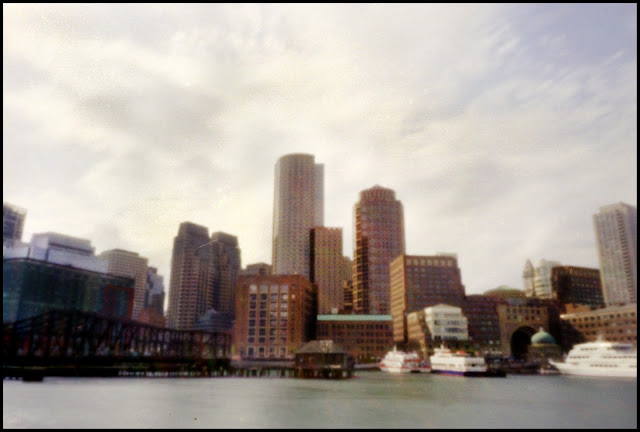 Then across the Fort Point Channel. 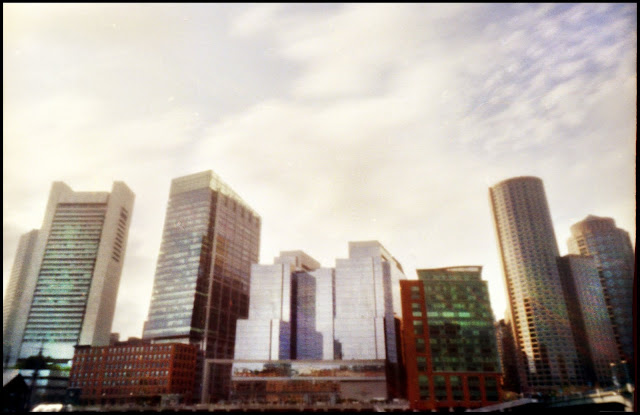 Later that evening, back on the south shore, we visited Stellwagen microbrewery. It's named for the National Marine Sanctuary we had experienced the day before. 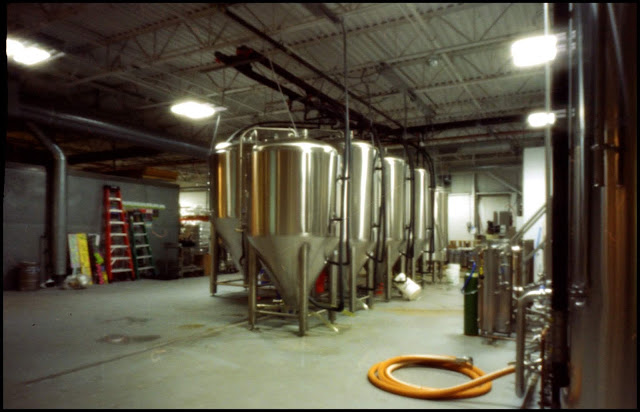 The next morning, some maternal counseling on garden planning. 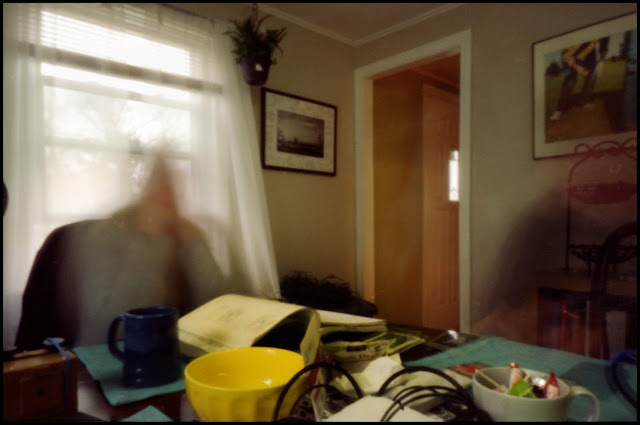 Many references were consulted. 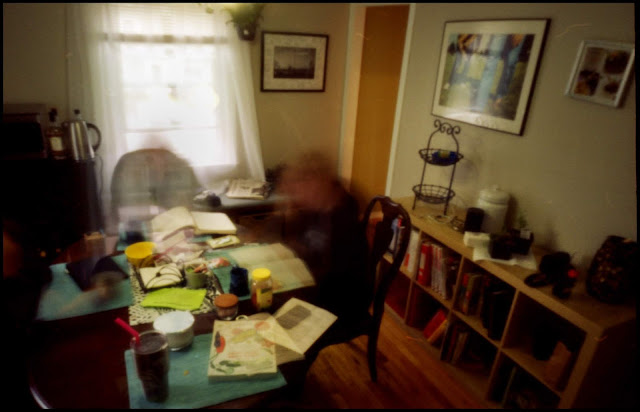 Synchronization between the end of the trip and the end of the roll of film is a difficult problem so I'll have to take you on a bike ride around Oshkosh.

The narrow strip of land between the old highway 110 and the new superhighway 45 has been filled in with a cluster of miniwarehouses. 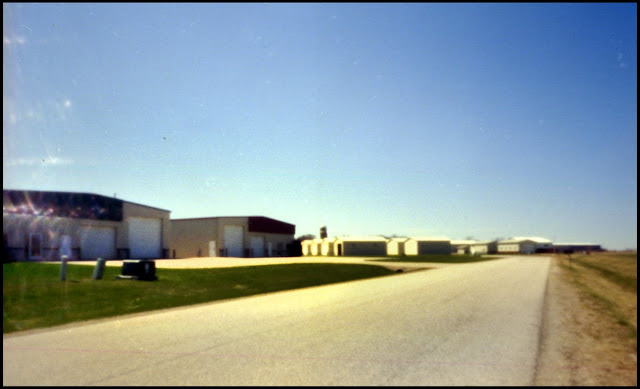 A fierce looking snapping turtle on it's way over the Wiowash Trail causeway. 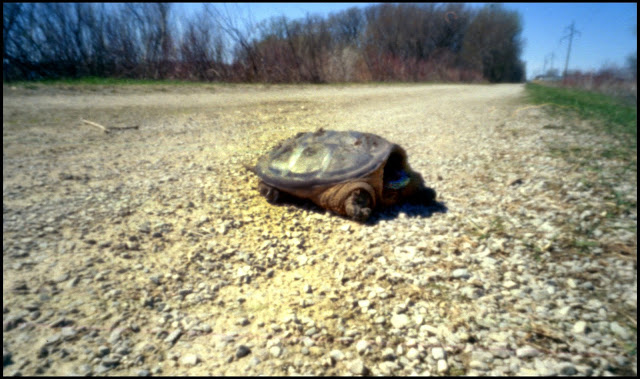 Getting flashed by a boat on the Fox from the Highway 41 causeway. 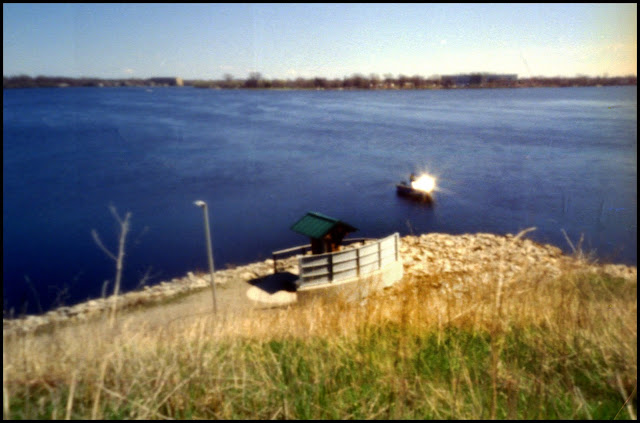 I'll finish with something I never do. When I passed these two I couldn't help asking if it would be OK to photograph them. One was under the focusing cloth of a Calumet 4x5 view camera pointed at the other who was carrying a Bronica 6x6 SLR. Check out the tilt of the front standard. They were very curious about my pinhole camera and what film I was using. They were both loaded with black and white film. The guy with the medium format kept measuring me with a Sekonic meter but he never made an exposure. It took a while for me to get them to go about what they were doing so I could get my photograph. 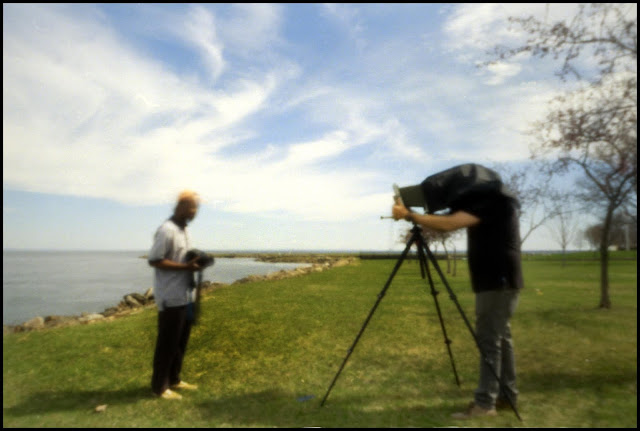