Two New Understudies for The Populist 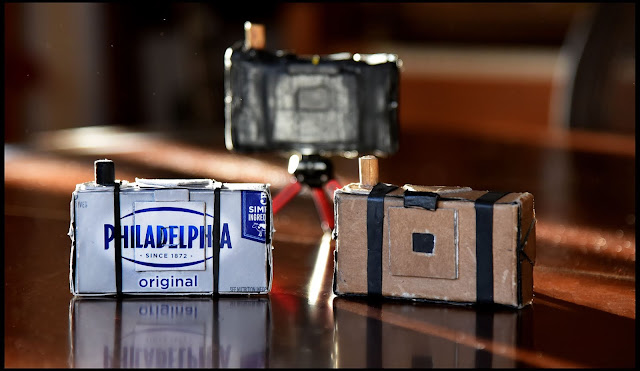 On road trips, I carry two of the 35mm Populists. When one runs out of film, I switch to the other. The clicker indicates how far I've advanced for each exposure, but I'm not even close to organized enough to keep track how near the end of the roll is. The cameras are reloadable in the field, but it takes a few minutes and there are multiple parts to keep track of. Also, there usually are others along who shouldn't have to wait for me. Carrying two of these little cameras isn't much of a hassle in most circumstances, especially if you're wearing a jacket.

I got sick of reloading in less than ideal circumstances and built the New Glarus Populist two years ago to be this second camera. Alas, last fall it stayed on the steps of the Philadelphia Art Museum after we left.

I built a replacement with the plain brown cardstock facing out. As with Mars rovers and trans-Neptunian objects, when there are several of a thing to consider, it helps to give them a name. When painting the inside for opacity, I oversprayed one side of the camera which dried onto the newspaper. When I picked it up the outermost layer pealed away leaving half the side a much lighter brown. It looked horrible. We had just visited Edward Gorey's home on Cape Cod so, inspired by his drawing I redarkened this bit with crosshatching. Trying to decide on a name, I thought of Gorey's work "Gashlycrumb Tinies," a somewhat dark alphabet book. The only one that sticks in memory is for my own initial: "N is for Neville who died of ennui." Let's call this camera Neville.

Several weeks later, Sarah made cheesecake for the holidays. Confronted with three empty cartons from Philadelphia Cream Cheese, fate deemed I should use them for a replacement for the New Glarus camera. The name for this one is obvious.

Both cameras have a .15mm pinhole. The reason the naming is important is that one of them has a Gilder electron microscope aperture, and the other the product of my humble skills.  Let's see if you can tell which is which.

Neville began with the sugar bowl. 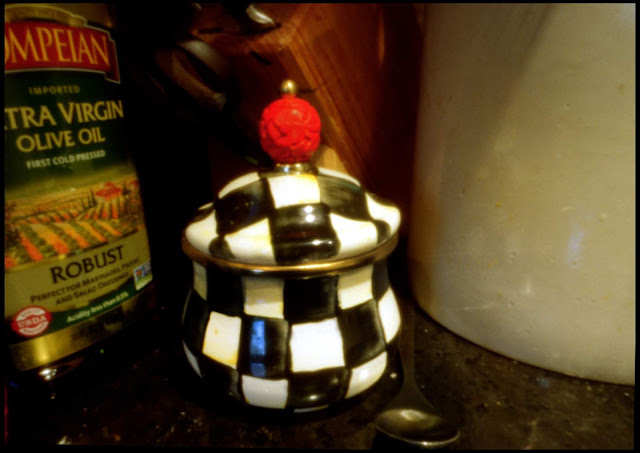 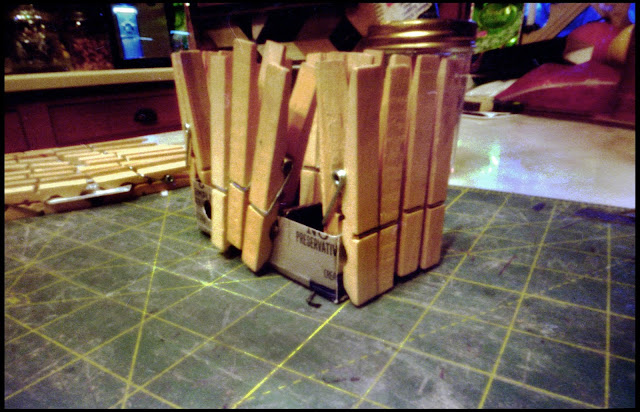 The first frame for Philly was a bouquet of alstroemeria. 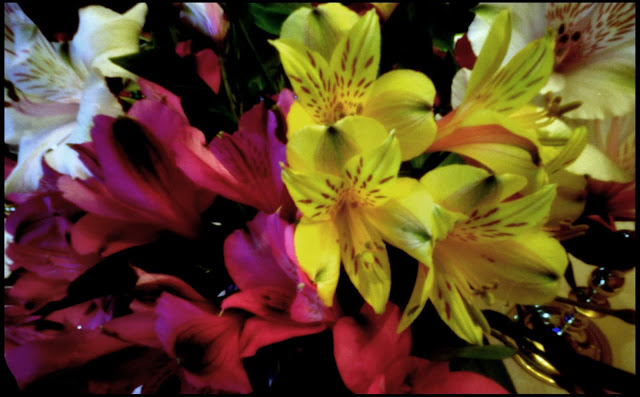 Surfing the net with what appears to be three hands and differently colored legs on my jeans. 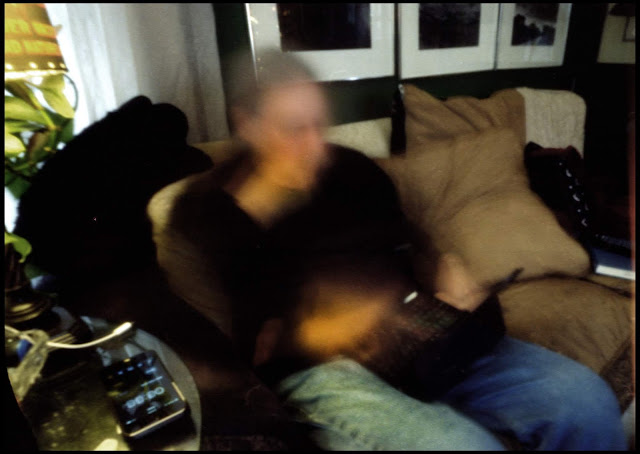 I put out several cameras for the eclipse. These two identical cameras were strapped to a board angled so the images should slightly overlap to give about a 140° panorama. This method didn't work out that well but the following images will give you a chance to make a side-by-side comparison. Philly is on the left, Neville on the right.

These cameras are about the same speed as Thin Lizzy and the film is faster but the trail of the fully eclipsed moon isn't visible, as it was with the larger format camera. Probably because the fully eclipse phase was near the center of the frame with that one and with this, is at the vignetted edges.

Since they were rigged up like that, the idea deserved another try in the kitchen.

A last attempt in the living room

I had recently been using the 120 Stereo Populist and the stereo front for the 6x9 Variable Cuboid. One of the principles of stereo photography is the relationship between the baseline and how close you can get to something and get a viewable stereo image. Normally, the baseline between pinholes with a 35mm stereo camera is 36mm and you can get within about a foot of your subject. With the cha-cha method – where you move the camera between two successive exposures – you can make the baseline whatever you want and get really close up. I taped a ruler to the table to keep the camera parallel and with a 10mm baseline did a closeup of one of the alstroemeria that had fallen off the bouquet. (Set up for crossed eyes.)

I started with Philly.

The clicker on Phillly failed and the back up method of one-and-a-half revolutions of the winder left giant gaps. So, I ran out of film in that camera, and continued on with Neville and a dried up lemon.

Both of them together with a 15mm baseline.

Returning to two dimensions, a sunbeam in Mrs. Paine's dressing room at the Paine Art Center. 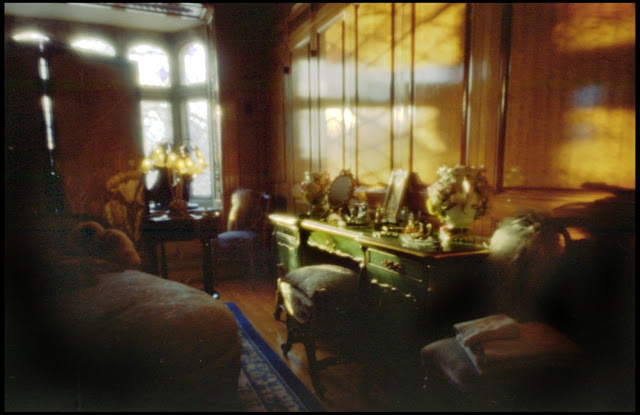 Since it's still winter, it's hard to go out to take pictures without snow being involved. Here's our Radio Flyer lying on it's side so when the snow melts it won't provide a breeding ground for the mosquitos. 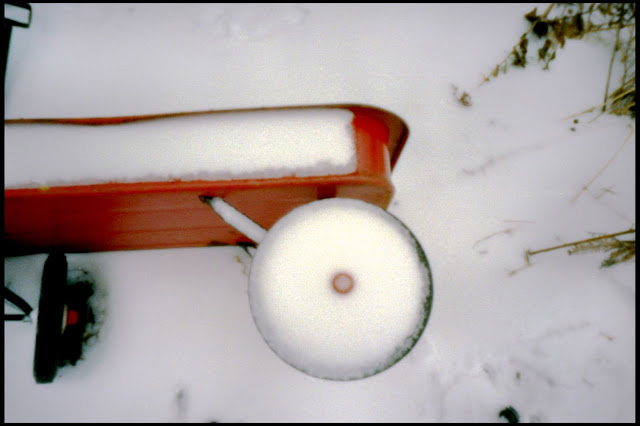 Pots under the snow. 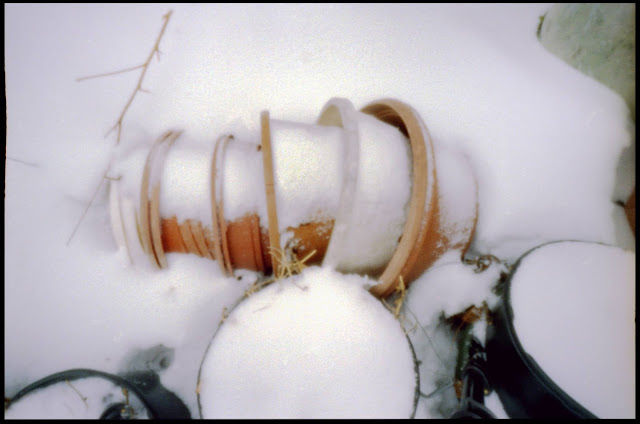 A little abstract expressionism with an Amarylis in front of a mirror. 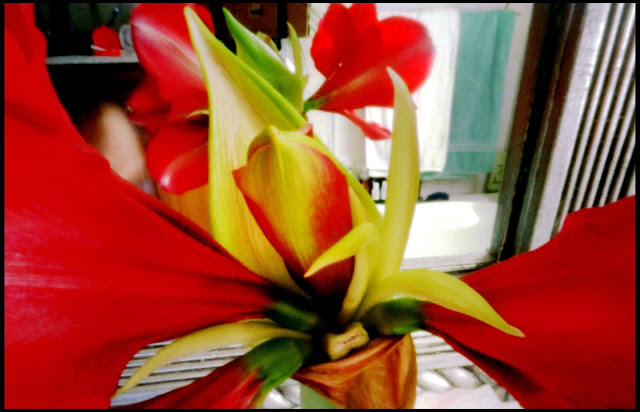 So can you tell which pinhole is the perfect Gilder and which is the home-made Nickon?

The original Populist is still in the rotation but now I have to be careful that Neville doesn't get too bored.

Posted by Anonymous at 5:07 PM