The cult of The Risen Pinhole

Here's more of my infatuation with rising front photography. More Oshkosh architecture, and this time all from the back of the buildings. I'm not just trying to be bleak. I try not to ride my bike on busy streets, so in a lot of places I'm looking across a parking lot on the streets a block on either side of Main Street.  I also snoop in passageways and alleys.

I seem to have a thing for junctions between buildings. Here, Merrill Elementary School joins its gymnasium.  The tripod is downslope a couple feet and I think I might have had the camera tilted a bit. The verticals look a little wonky. Still, it's a lot different than it would look with converging verticals. The building on the left is an addition that separated from the older building in the front of it and had to be repaired.  These walls might not all be plumb. For some reason this reminds me of a Bronze age fortified city wall. 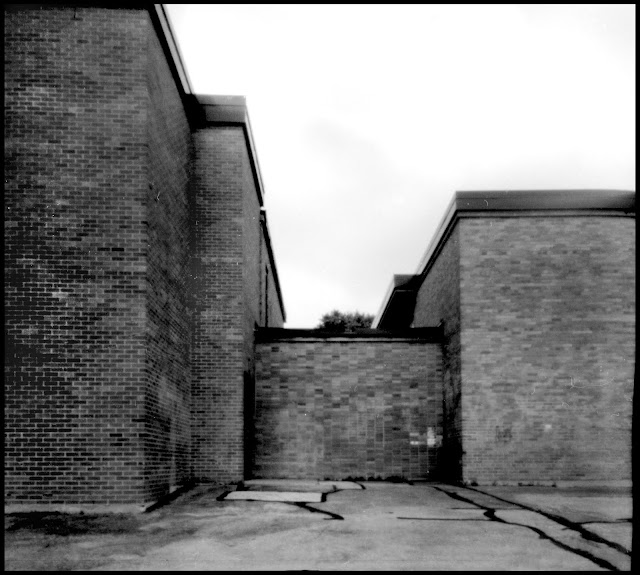 The First National Bank Building - one of two notably tall buildings in downtown Oshkosh.  What I'm attracted to is this jumble of cuboids of various shades of grey, all carefully built at right angles to each other.  Seems only polite to keep the verticals parallel as possible. This one may have the verticals diverging, but I'm OK with a little of that. It gives it a bit of Looney Tunes character. 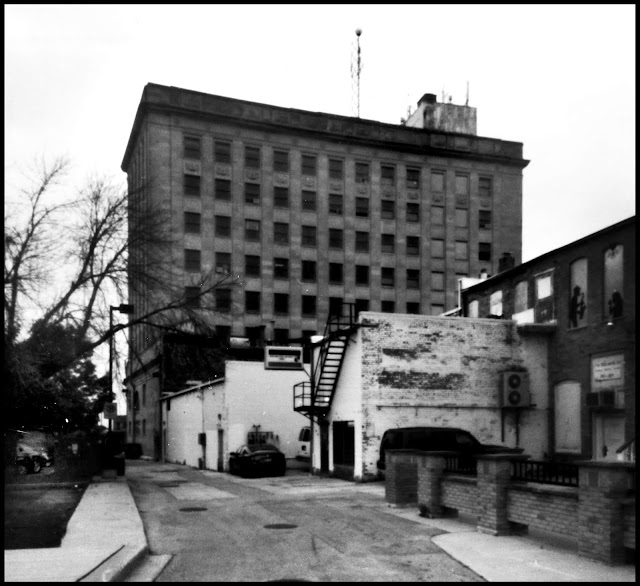 The intersection of the Oshkosh Northwestern and the Winnebago County Health Department (which was once Oshkosh B'Gosh). In my selfish photographer's heart, I love the sky reflecting in these perfectly smooth insulated mullionless windows stuck into the backs of these historic buildings. The vines do give it a bit of a rustic look. 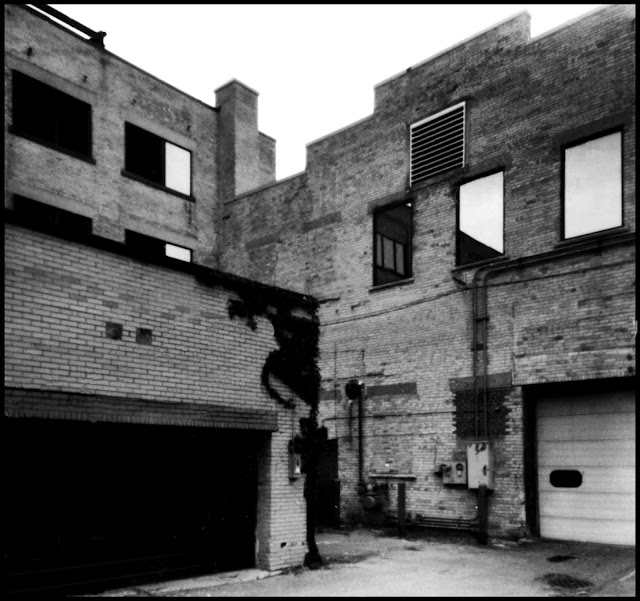 Some rectangles at the new arena. 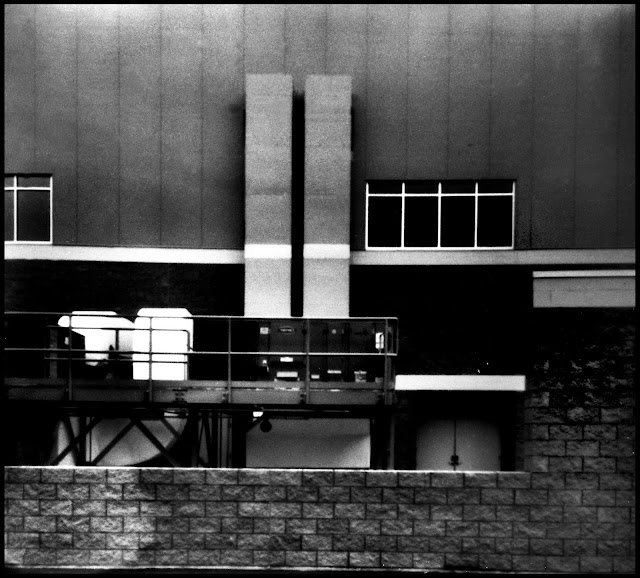 This one's not exactly architectural.  This bridge over a small inlet is where the new section of the Riverwalk on the south side of the river begins.  The old train tracks that used to run through downtown crossed the river here and they reused some of the iron. 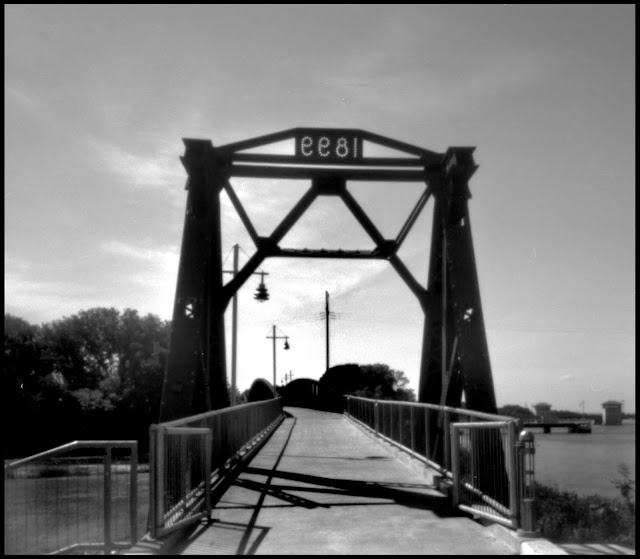 And totally not architectural.  if I had pointed the camera up and if the tree was exactly in the middle there wouldn't be any converging verticals  but I think it does make a difference to have the off-center tree trunk perpendicular to the horizon by using the risen pinhole. 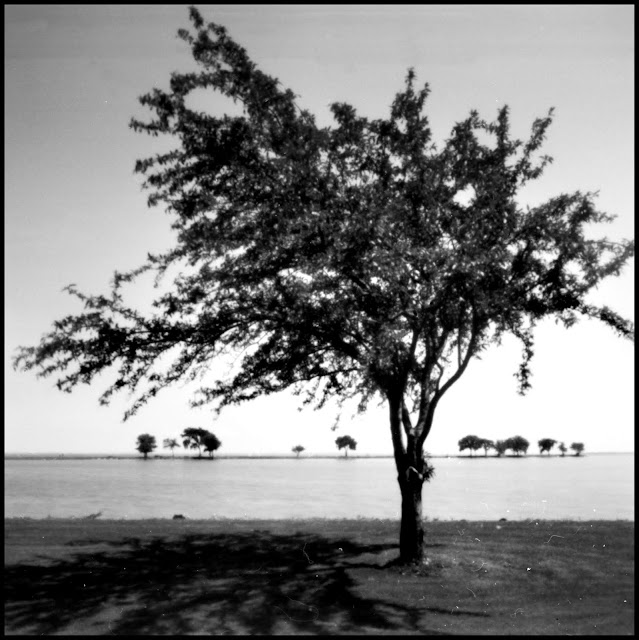 The above were done with the New Evil Cube. I was so taken with this rising front idea, I put a second pinhole and a new double shutter on the Moderately Telephoto Pinhole Camera in a Plain Brown Wrapper, so I could work with things a little farther away.

I had to point the camera up to get just the top of the Mainview Apartments, the other tall downtown building. I still used the risen pinhole. The verticals noticably converge a little, but it doesn't look like it's falling over backward. 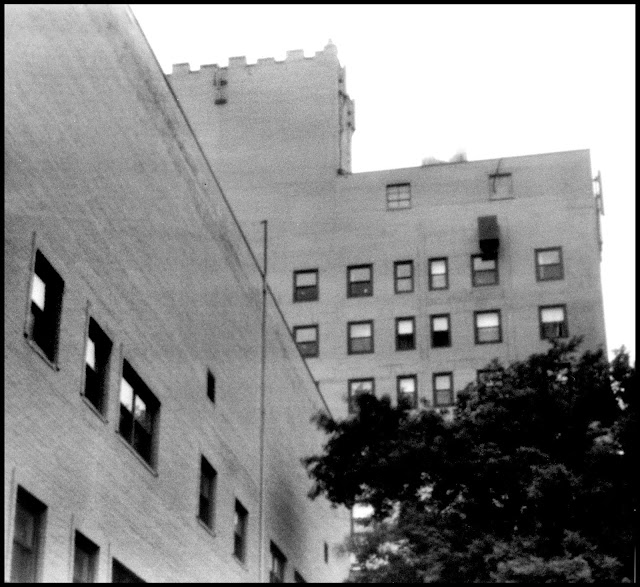 I thought there was an interesting contrast of shades and textures in the back of the old Mercy Hospital, now a senior housing establishment. I think I tilted the camera up just a little this time to crop out the parking lot although everything's looking pretty parallel. 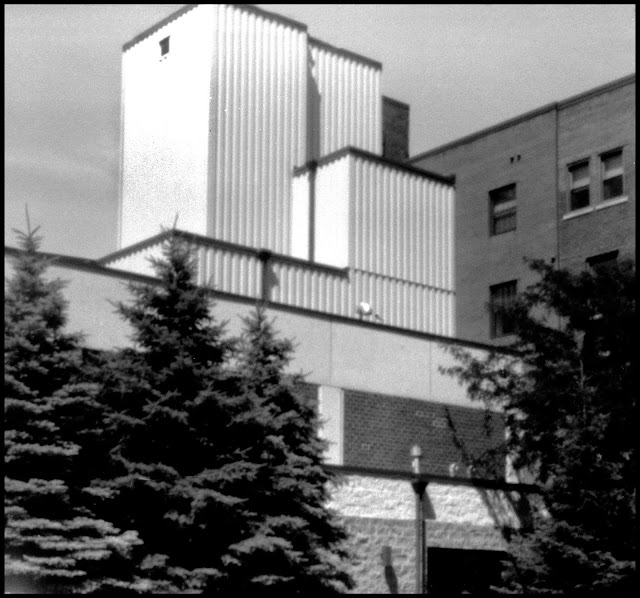 My partner in crime, Camera Casino, our local camera store.  They used to develop my color film, but now they send it to a lab in Neenah. While taking this picture, for only the second time ever, someone came over to me to ask what I was doing. He was a newly retired guy who was just starting to ride his bicycle around Oshkosh. 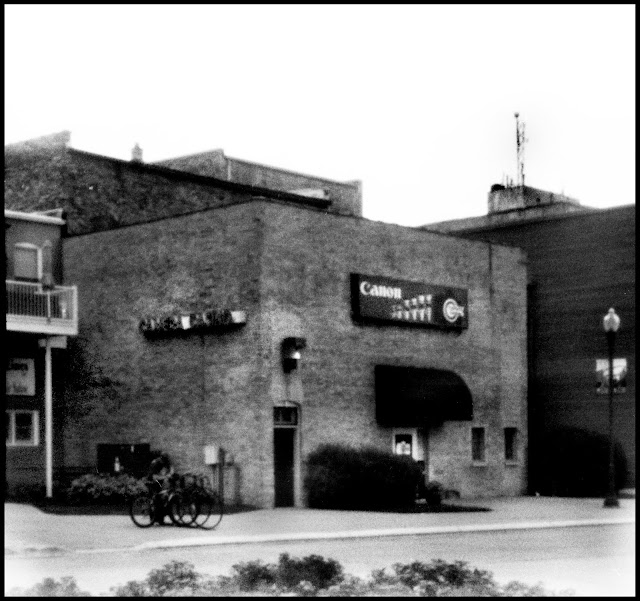 With these two rolls of film, I had some of the worse problems I've had in years with double exposures, under exposure and accidentally-opened shutters. I think I'm going to take these cameras out again and be more careful.  I have to get over this devotion to The Risen Pinhole though.

The first six with The New Evil Cube. .3mm pinhole 6cm from 6x6cm frame located 15mm above the axis of the film plane, with Kodak TMax 100.

The last three with The Moderately Telephoto Pinhole Camera in a Plain Brown Wrapper. .33mm pinhole 12cm from 6x6cm frame located 12mm above the axis of the film plane, with Ilford HP5.