Faux on the Fox

Our city summer celebration, Sawdust Days, takes place in Menomonie Park. Across the lagoon from the carnival and rock and country bands, which you can hear anyway, is a Historical Village characterized as a Rendezvous by it's participants. It roughly has a theme of the Voyageurs of New France and is set around the time of the American Revolution.  Sawdust Days coincides with Independence Day. There are lots of American flags on display.

I took three cameras: the trusty Evil Cube, Goldberry for her narrower angle and the 10th Anniversary iPhone Box Pinhole Camera to be ironic. They were loaded with color film because it might be perceived that I was trying to imitate early photography, which would be really inaccurate chronologically anyway. I should know by now that I was going to get very documentary and it turned out to be about a bunch of modern Americans playing around with history, and trying to make a buck doing it.

I had ridden my bike by the village in previous years and the uniformly colored canvas tents in the dappled light under mature oaks seemed like an attractive subject. 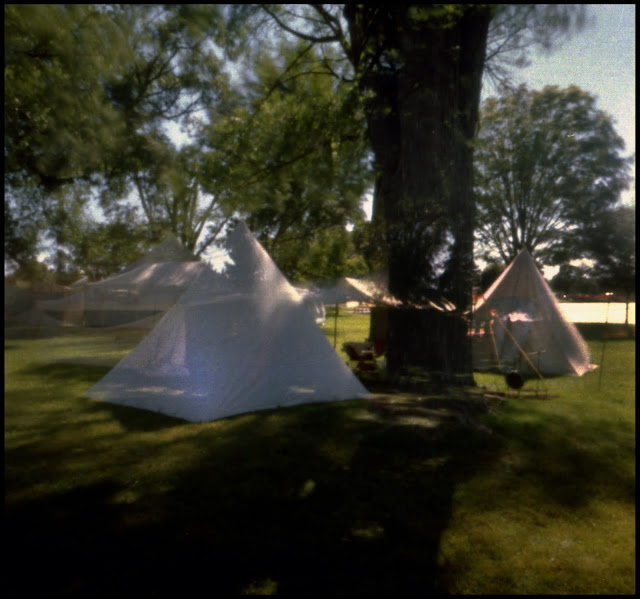 It was hot and sunny. Most of the encampment was in the shade under the trees. 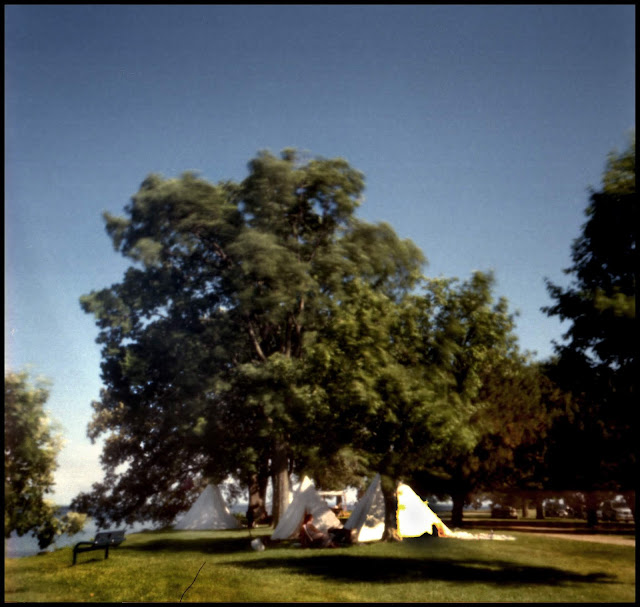 The locale is right next to Lake Winnebago, on the Fox/Wisconsin River trade route between the Great Lakes and the Mississippi, so it is likely that people gathered here in the 18th century. In the People of the Waters exhibit at the Public Museum there's a quote from my friend Jeff Behm: "If you're in Winnebago County and you can see water, you're standing on an archeological site." 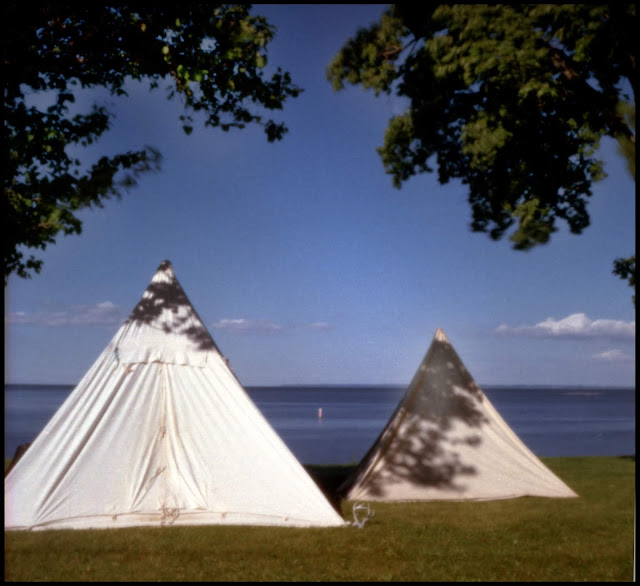 I went there with the explicit idea that I was going to take pictures of people.  I'm usually reluctant to ask, but I reasoned these folks were kind of strutting their stuff and were habituated to having cameras pointed at them and that would make it easier.

As I approached the first campsite, it's occupant made eye contact with me and said "How are you doing?" I inquired if he and his compatriots would mind being asked if I could photograph them. He replied they really appreciated being asked, and said sure go ahead. This turned out to be the typical response almost word for word. While I fussed with tripod and camera he explained to me that he did this specifically to explain how the earliest white settlers and the Native Americans tried their best to get along and trade with each other.  He could trace his ancestry back to both groups on both sides of his family.  He also assembled little beaded jewelry to sell.  The film can was filled with brass beads. He seemed to consider my pinhole camera as nothing out of the ordinary. 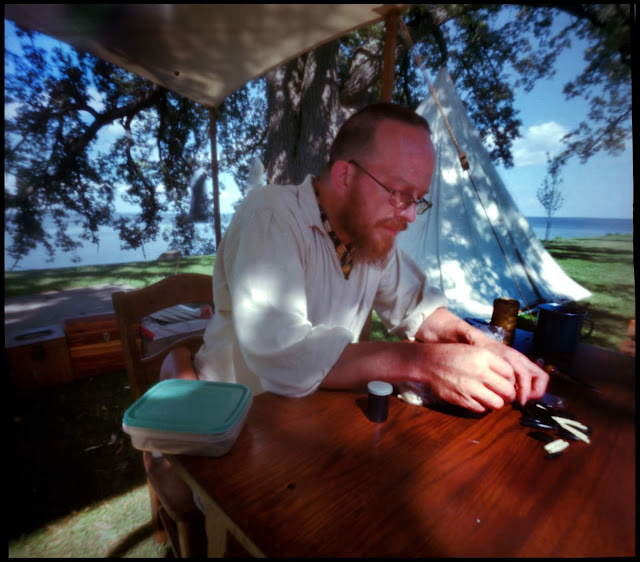 The village was advertised as an educational experience and there were organized activities.  One of them involved tipis. I approached this guy because of his red shirt. A similar picture of him appeared in the weekly Oshkosh Herald.  He had made a pinhole camera for a Boy Scout merit badge and had worked as a photographer with a Bronica 6x6, so he knew what medium format was. 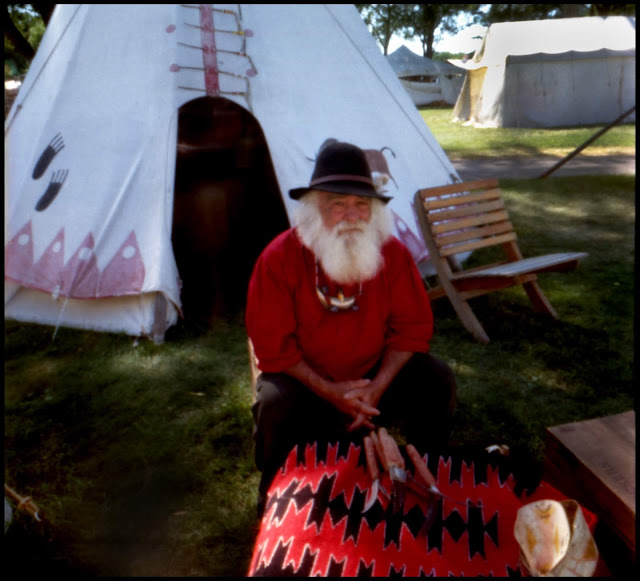 His tipis are examples of several tribal styles. He had two others and about a dozen 15 to 20 foot poles next to him that he uses to demonstrate raising one three times a day. This is his favorite because the door is wide open and easy to go through. 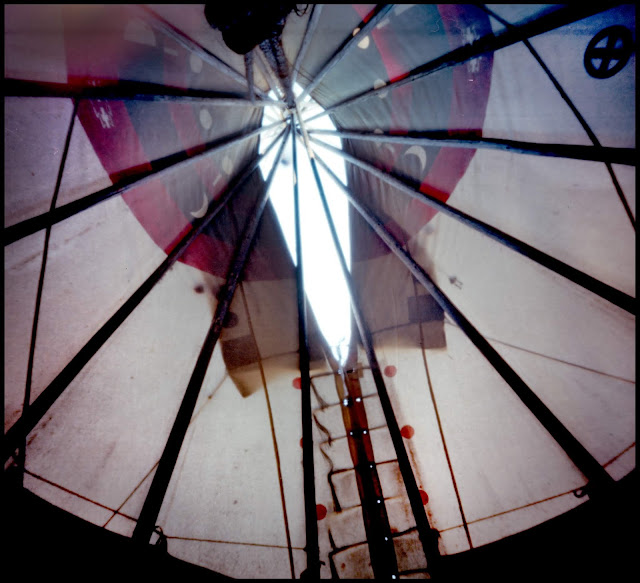 I continued down toward the lagoon and things transformed into a modern pastiche - kind of a colonial souvenir mall.

Some of the merchants were food vendors who were trying to make a historical hamburger.  Craft-brewed root beers seemed to be the dominant beverage. As soon as I got the camera set up, this publican got a call on his cell phone, and I waited ten minutes till he was done.  Despite several customers being served (in paper cups), no one said a thing about the iPhone Box on top the tripod. 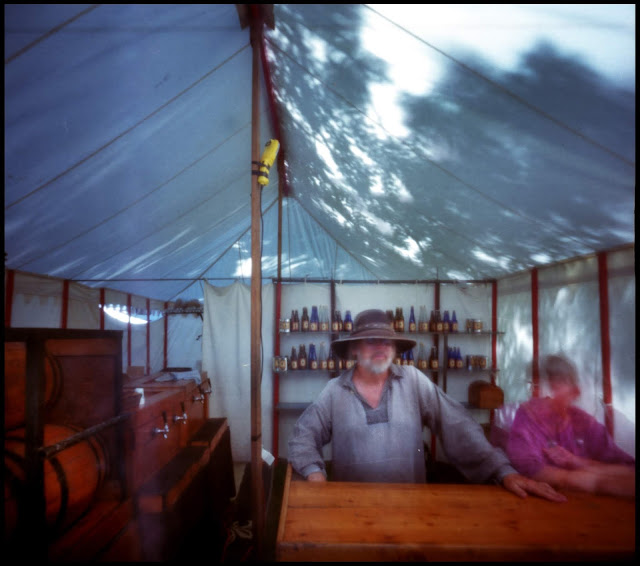 There was one tent that was mostly closed.  There was a boom box playing heavy metal inside it. I went around to look at it from the other side and was taken by this huge, brilliant red wheel controlling a giant black corn roaster, with the gas supply on the ground behind it. It really captured the spirit of the area for me. 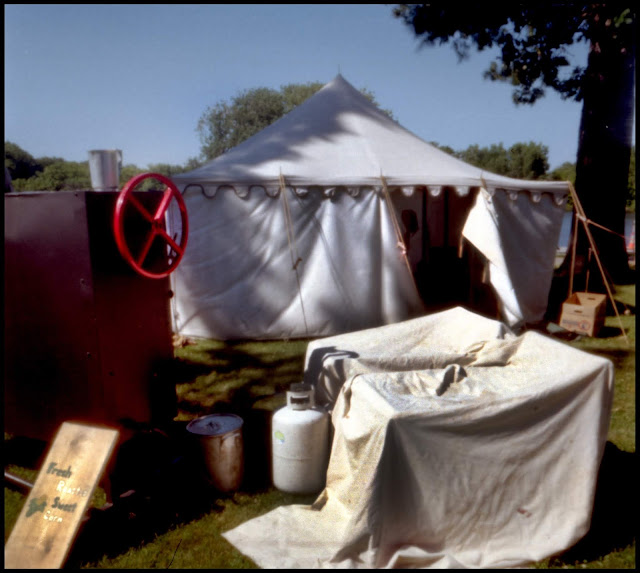 The pretext of being historically flavored meant lots of beaded crystal necklaces and cast metal rings and amulets were for sale, but in quantities and qualities that were indicative of mass production. In the bin of light colored objects in the foreground, their shoplifting policy is just barely legible. 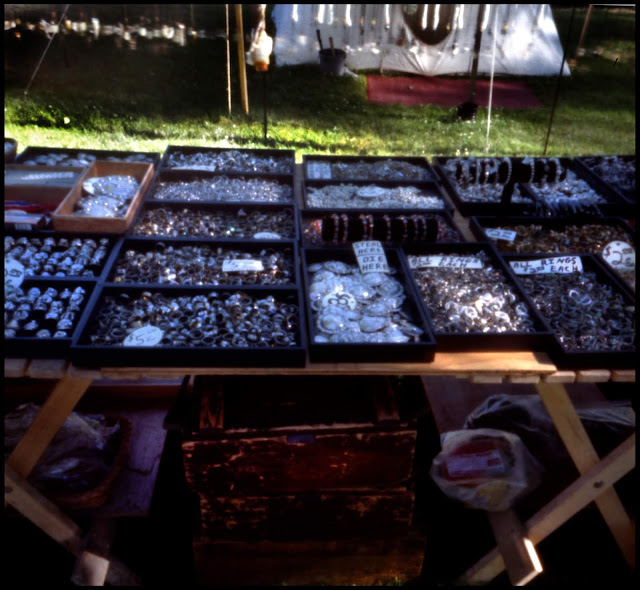 In keeping with the fur-trading and hunter/farmer lifestyle that was the theme, there was a somewhat macabre aspect to a lot of it. I didn't see many firearms, except for the cannon they shot off every half hour. A lot of the merchandise consisted of toy wooden bows, cross bows, axes, knives and swords also seemingly factory produced, occasionally with a father and son pointing one at you. 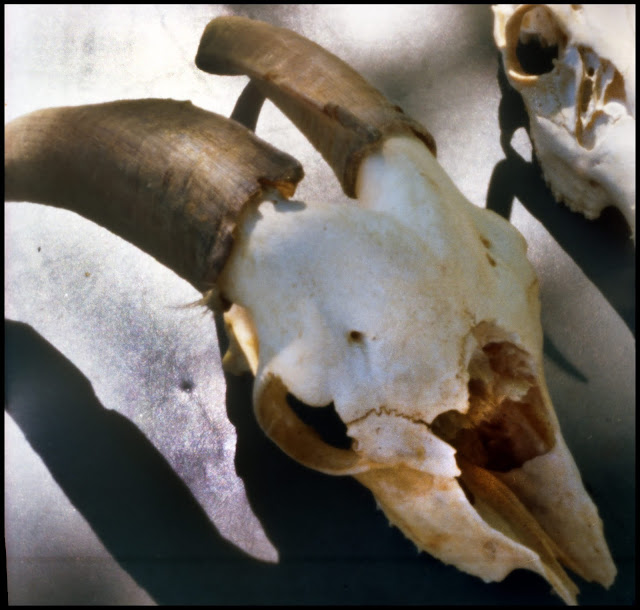 There was a lot of what looked like fur around, but I was afraid to ask if it was real. 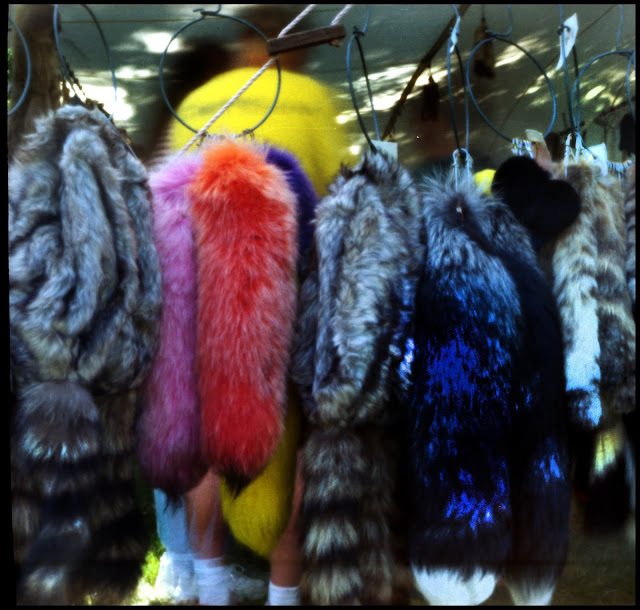 Returning back to the less commercial side. I asked if I could photograph this fire where a piece of sod had carefully been peeled back for it with an arrangement of axes and cookery ware. While I was setting up and making the exposure, a young man in historical garb came up to watch me. Since the first guy had spoken about why he was engaged in this practice, I asked if this one got into it because of a family connection or if he was just into history. He said had no ethnic connection to life in the colonial-era midwest and he came from a suburb of Milwaukee.  His family was just into it. He attended his first rendezvous when he was four months old. 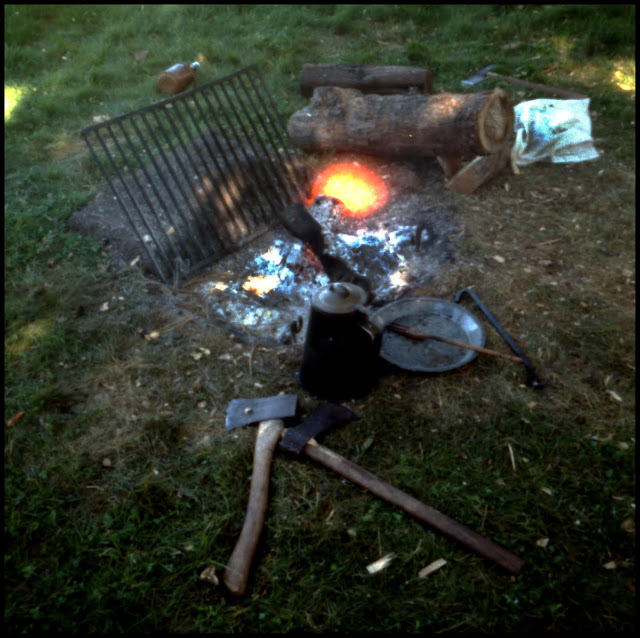 I finished with a family relaxing under a canopy.  While I set this shot up, the patriarch, wearing loose white trousers, came up to the pile of supplies and rummaged through them bent over facing away from me.  I waited until he sat down to make the exposure and we all joked that I might have lowered the value of my photograph by including the south end of a horse facing north. 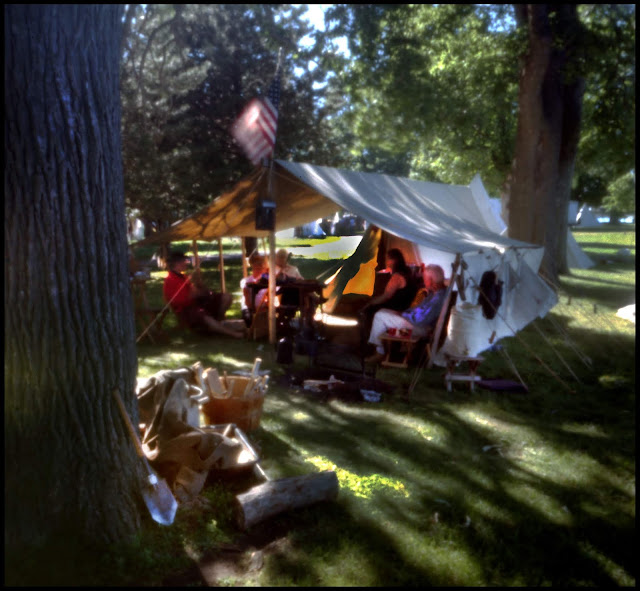 All make 6x6cm negatives.
Posted by Anonymous at 3:22 PM