I've just finished two rolls that started one way last year and then kind of got forgotten.

When I finished the roll which I took to the Paine Art Center in the Evil Cube, I thought I had left the camera sitting empty on display on a tripod in the living room, but when I went to load it for documenting my surgery experience, I pulled the back off, saw that I had reloaded it with Portra 160 and as fast as I could, pushed the back closed again.  Wanted to use the 400 for the medical coverage, so I just rolled the 160 back on the original reel (why you have two winders) and put it in the freezer with a note on it. After I finished the Shut-in challenge with the faster film, I loaded the orphaned 160 back into the Evil Cube.  It was on frame one when I opened the camera, so I thought I would be safe to advance to frame four. Turns out, frame three was probably OK.

This was when the magnolia was still blossoming, and I'm always taken by the pattern of the falling petals around the trunk and the daffodils. 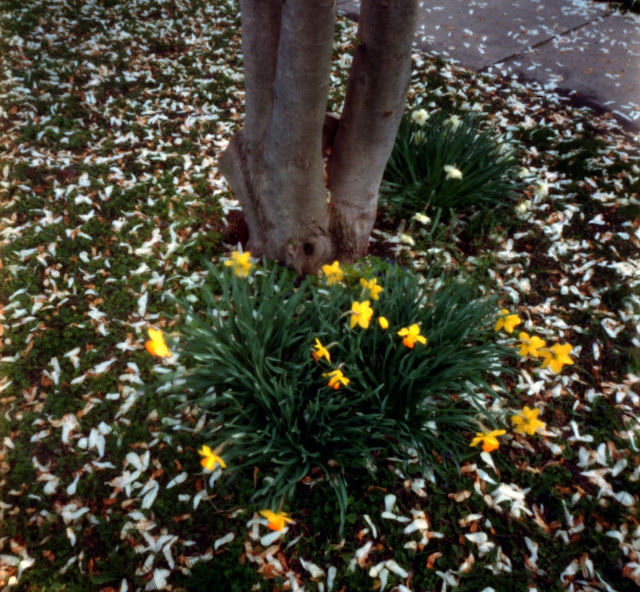 By this time in my recovery, I was cooking a little again, so got seduced by a sunbeam in the south kitchen window. Since I've taken similar shots many times, I hung the cane on the sink to place it in context. 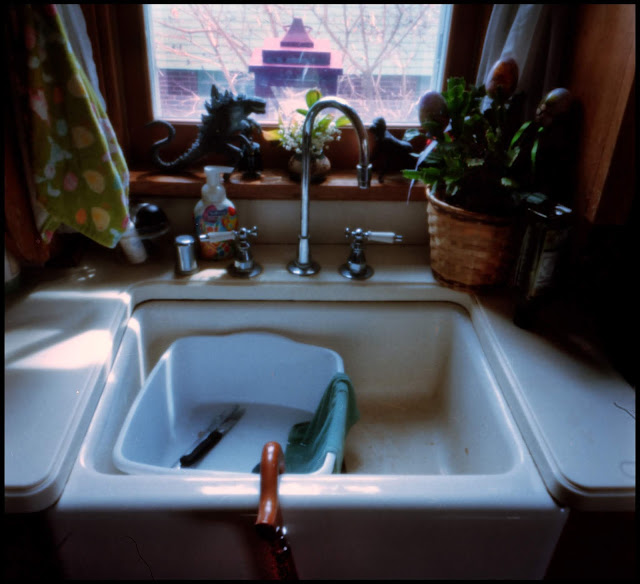 This was a week before WPPD, and I did a more loosely framed version of the same dish of fruit that was tightly cropped on Pinhole Day.  It's actually sitting on cake plate (you can see the shadow of the base), but it looks a little like it's floating in air. 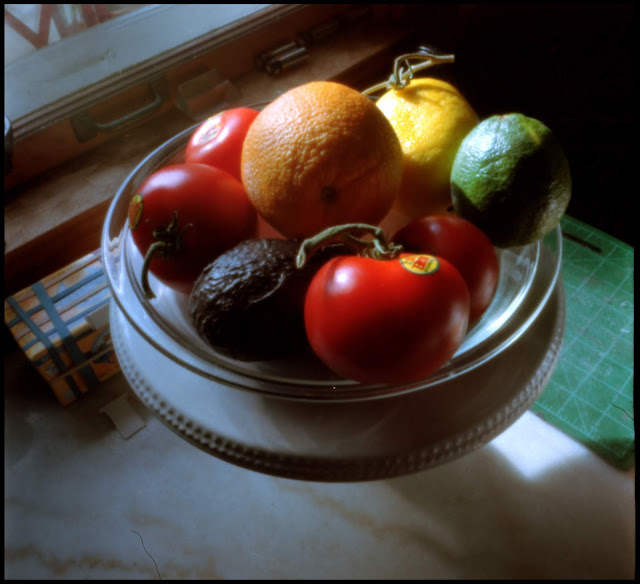 The other orphan roll, was from the other camera I had with me that one gloomy day I shot in the Paine Art Center, the Glenlivet Vertical Populist.

It was very dark except for a few minutes of sunshine that day, and I could only fit one hour and a half exposure in with that camera. This is in the powder room off Mrs. Paine's sitting room. It's behind a velvet rope across the door which is just to the left of the frame, so you never see it face on like this. 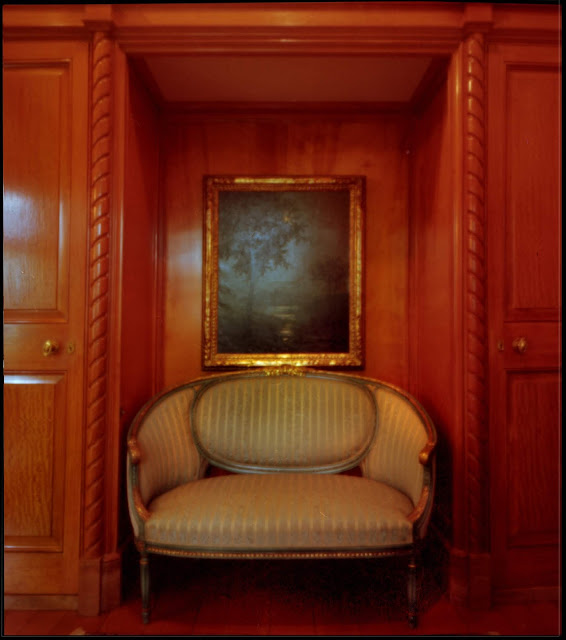 When I got home, I put the camera on the shelf in the basement and kind of forgot about until I shot the other orphaned roll.

In order to ride for the first time after surgery, I had to put the summer tires on, which I did on the sunny driveway. 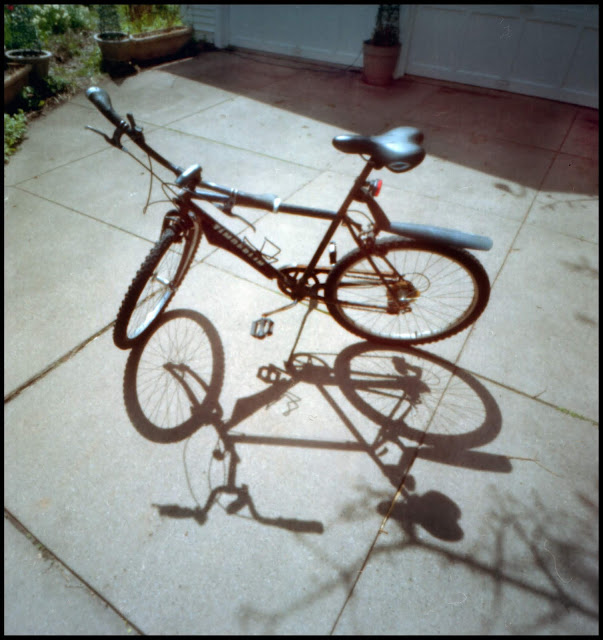 One of the oaks making a calligraphic stroke on the garage. 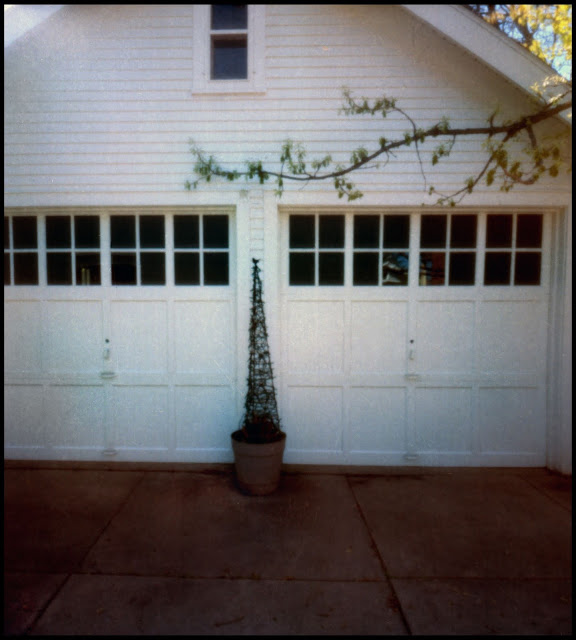 Gene and Laura came to visit. Here's Gene shortly after they arrived after driving through rain for three hours. 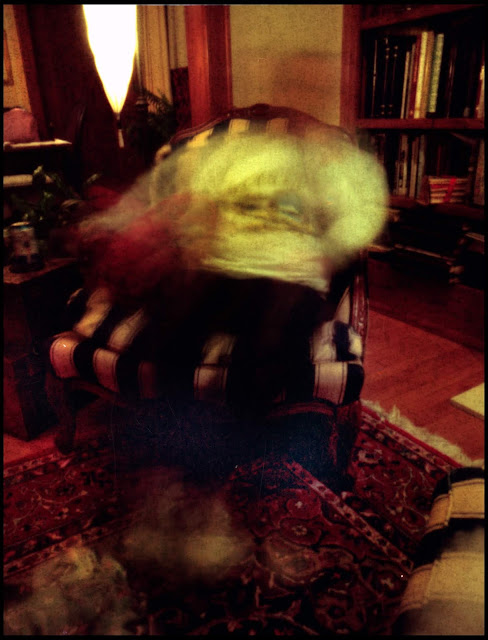 He had calmed down quite a bit the next morning. 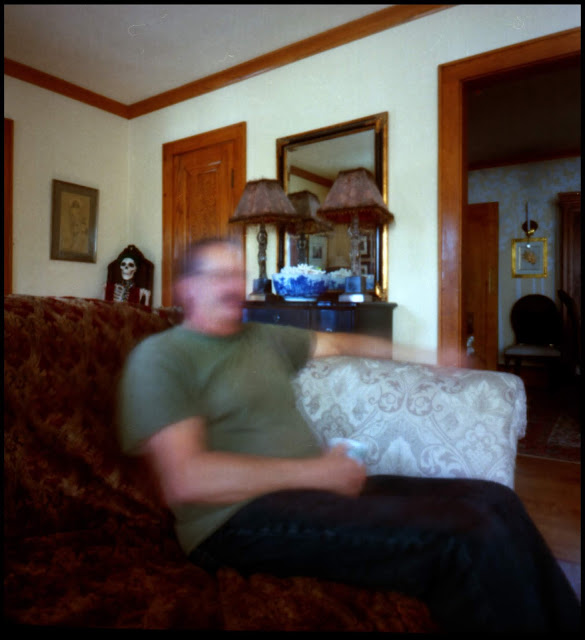 Laura in a near real time discussion of a casting announcement for a community theater production. 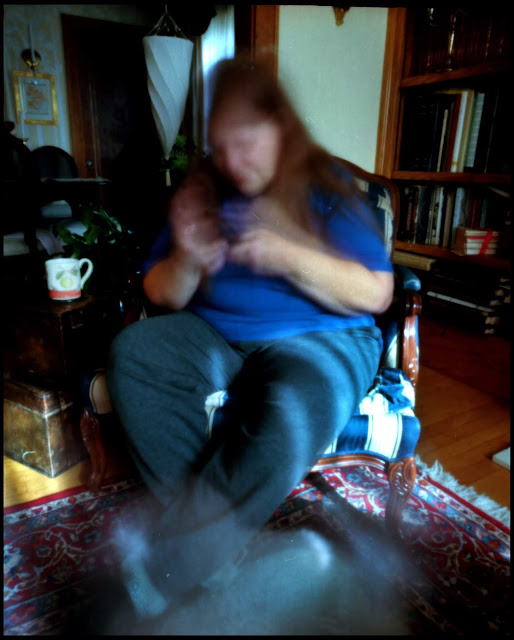 Don't you just hate having to use up the leftovers after you have guests? 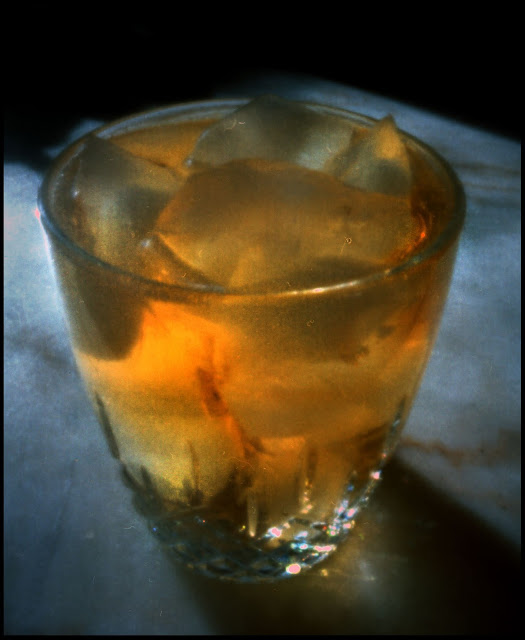 And, in case you were wondering about what happened to that tulip trying to grow up through the rose thorns on Pinhole Day. 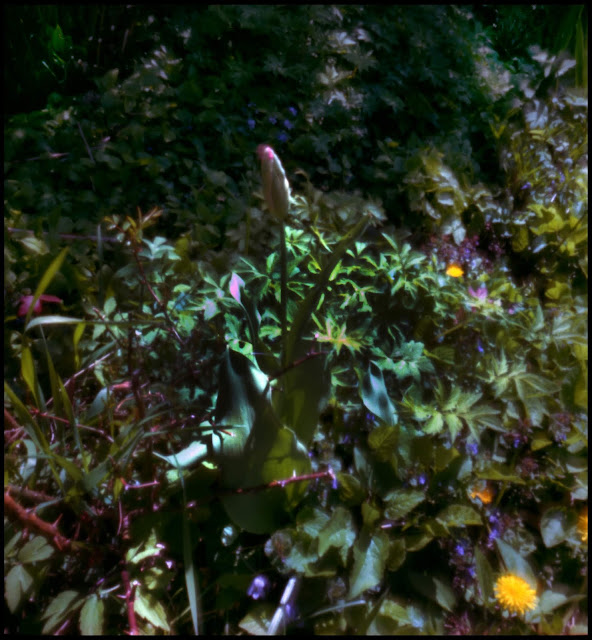 The first three with the Evil Cube.  .3mm pinhole 60mm from 6x6cm frame.

The rest with the Glenlivet Vertical Populist. .3mm pinhole 45mm from 6x6 frame.
Posted by Anonymous at 1:48 PM