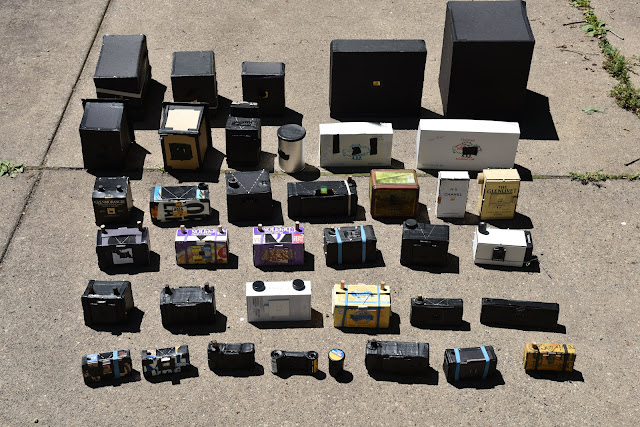 I shouldn't use the term manifesto, because that implies I'm trying to convince you of something, and I firmly believe you'll have more fun and be more creative if you just do what you feel like, but "statement of personal objectives and standards" doesn't make as snappy a title unless you have a Masters in Business Administration.

I think a lot about why I make cameras the way I do, and why others do it differently. Writing about something often makes you spin it around and look at it a little differently, and there's always the possibility that someone might comment and realign my perspective a little.

I make cameras that I want to use. For many years it was single-shot cameras, but my current goal is to have a roll film camera that's reliable to use, portable, and reloadable in the field. That of course means absolutely light proof. Never saw light leaks as charming.

Being made from paper, they're not as durable as wood with brass hardware, but they only weigh a few ounces and you could drop them off a ten story building and they would probably bounce without exposing the film. Some have been covered with opaque black photographic tape which makes them moderately waterproof, and I'm starting to experiment with clear finishes.

They're not made for sale. Since I promote the idea that anybody could make a camera as well and put directions how on the internet, it would be kind of weird to expect anyone to buy one. I think making your own camera is the ultimate sacrament of pinholiness. (Ya gotta do it at least once.) Recently the purpose of making some of them is to make sure those directions on the internet will yield a usable camera, and I do use them to make sure. I occasionally give them away.

I expect the images to be as good as those coming out of the best highly crafted cameras you can buy. This is determined by the shape of the exposure chamber and the pinhole. My experiment last winter demonstrated that anyone can make a pinhole, while not measurably better than expensive commercial pinholes, good enough that in most applications you can't tell the difference. (This post is about camera making, but, it's not the camera that takes the picture, it's the photographer.)

I started out drilling my own pinholes, but got hooked on Gilder electron microscope apertures for about a decade. Just in the last year or so, I've gotten a little superstitious about using anything but hand-drilled pinholes, and am actually having fun seeing how good I can get at it. Not about to say to an audience of pinholers that sharper is better, but it's fun to try.

You have to know roughly what's going to be in the picture.  My viewfinders are triangles on the top and sides of the camera which point to the edges of the image. Some 3 dimensional object like a bead does a better job than just a line drawn on a flat surface.

You need to know that the film is advancing, and how far.  With 120, a window with a shutter in the back does this, and for 35mm, counting sprocket holes with an audible clicker will tell you if you've advanced exactly one frame. I'm not as concerned about knowing how many frames I've exposed. Discovering when you get to the end of the roll seems to work with the zen of pinhole. I'm not fond of directions to rotate so many turns for each exposure.  If you space it right at the beginning, you get increasingly large gaps between frames toward the end.  If not you can overlap images. Wasting film is definitely not pinholey.

A tripod mount is essential.

I prefer a flat film plane, but that's an aesthetic, not an engineering decision.

My cameras are hand-made. The most complicated machine I use is a scissors. I don't have any woodworking or metalworking equipment or experience.

Glue, card stock, foam core, wooden dowels, paint, brass for the pinholes and the occasional cork from a whisky bottle are all the materials, often recycled from another purpose. I've been using the same bottle of Aleen's tacky glue for years. Much of the card stock is from packaging. I have bought a sheet of foam core and one each of black and white card stock in the past year (Tons of scrap pieces were available when I worked at the university). I bought a 100 x 6 inch roll of .002 inch brass shim stock on a grant in 1992. It's gone through the grant kits, through a dozen workshops and I've still got about a quarter of it left. It is about as good a material as you can get. These are pretty inexpensive materials. I was raised by a depression-era child of immigrants, so I guess I'm a little cheap.

I've promoted the idea that you could print a template so you didn't have to measure everything, glue it to an appropriate substrate, and just fold it and glue it together. You could argue that printing a template with a computer is high tech, but it's one that's available to everybody. I don't own a printer. I go to the library when I need templates.

I don't always use the printed templates. Sometimes I don't use a ruler to measure, for example using the actual film reel to measure parts that have to be that size. Lately, I've taken to cutting some parts without a steel rule, just following lines by hand.  My cameras look handmade.

It may seem that I don't care what my cameras look like, and that may have been true in the past, but I've been playing around with the idea lately.

I definitely don't care if it looks like a lensed camera. Just about every plan or kit for a paper camera either has parts or printing on them resembling parts of a lensed camera. Some of them with the most parts, which can be tricky to put together, include multiple-part, moving, functionless assemblages to look like viewfinders, shutter speed dials and for Pete's sake, focusing rings - on a pinhole camera!

Lately though I've gotten the idea to make them with the printing from the cardboard I'm using facing out and working the packaging design into the parts and trying to get the parts to line up with the original illustration. I've done it several times in the past, but now I'm working on the sixth camera in a row this year in that category. Blog posts about these coming up. Watch this space.
Posted by Anonymous at 1:43 PM