Athens on the Fox

In 1836 Webster Stanley opened a trading post near where the Fox flows into Lake Winnebago. Four years later over 100 settlers were clustered into two communities on either side of the river—Athens on the north and Brooklyn on the south. In 1840 a post office was established and they had to pick a name. Neither side could convince the other and they ended up choosing Oshkosh, after the Menomonie chief who had ceded the land to the U.S. a few years before.

The only remnant of the earlier name south of the river is the recently closed Brooklyn bar. There is no evidence of the name Athens north of the river. There is an abundance of classical Grecian architectural styles on the north side but I don’t think those two things are related.

The ancient Greeks weren’t the first to support a roof with stone columns but the style they developed has persisted through many revivals. The Romans spread it throughout the Mediterranean. The 15th century humanist rediscovery of classical knowledge included Palladio’s architecture. That influenced the early Georgian neoclassical revival which led to Federalism in the new United States. The monumental buildings at the Columbian Exposition in Chicago in 1893 created a new popularity at the end of the 19th and the early 20th century when these buildings were erected in Oshkosh.

Ancient Greece is associated with the flowering of rational learning so what would be more appropriate for the Oshkosh Public Library built in 1900? It’s probably the most classical interpretation with it’s triangular pediment filled with reliefs, an entablature identifying the building and six Ionic columns. The face masks on the lions are a particularly current detail. 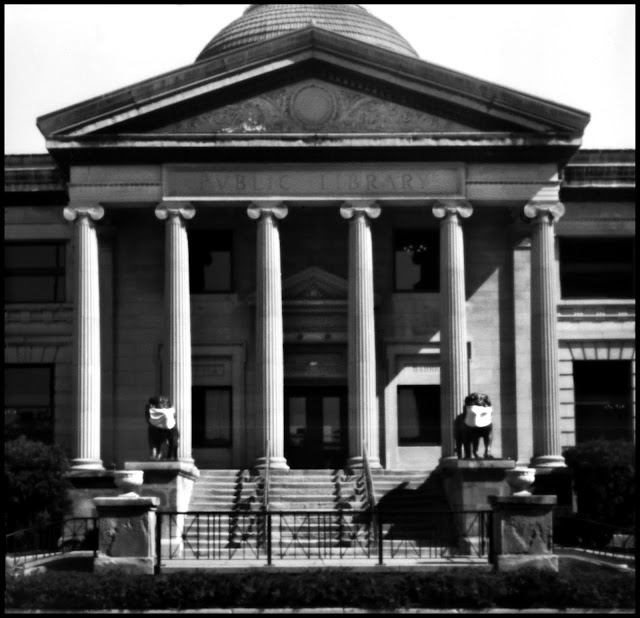 This style of architecture was used by ancients primarily for temples, so it’s no surprise that it was used for the Masonic Temple with it’s Doric capitals built in 1926 right next to the library 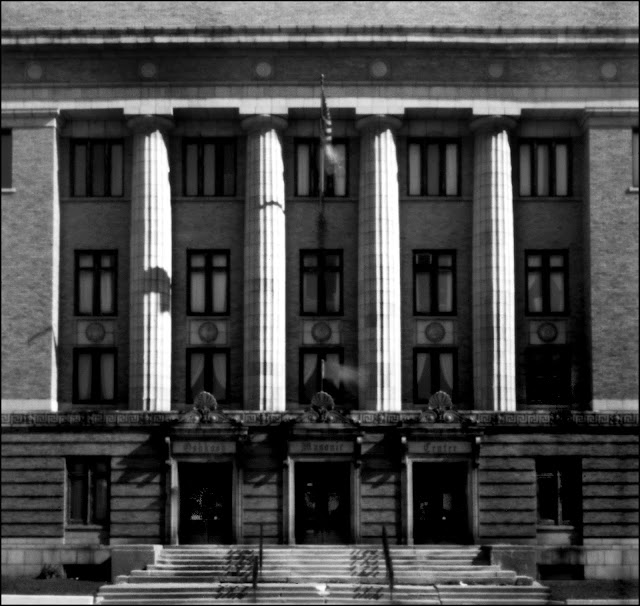 Next door to that, rounding out the trio of temples and orders of columns is the Wisconsin National Life Building. Done a year later it has Corinthian capitals and a more Mesopotamian frieze of winged lions on it’s entablature. 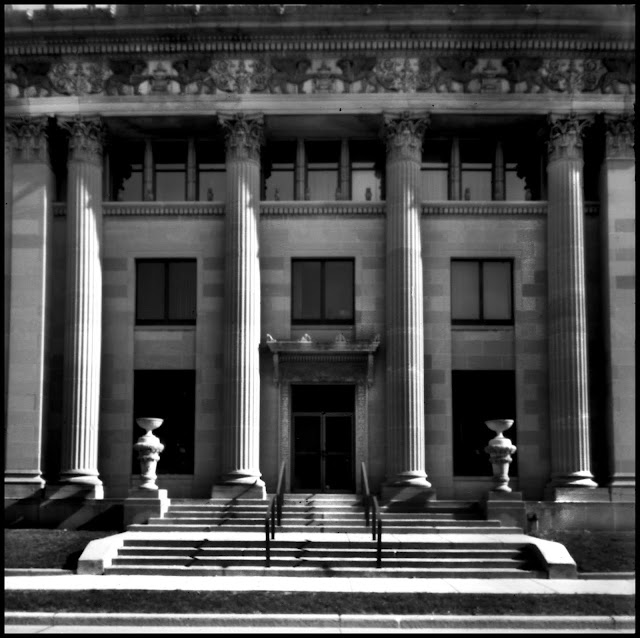 You might think that City Hall was inspired by the Federalism of government buildings. It was, however, built in 1915 as the Oshkosh High School. Remodeled for local government in 1961, the monumental staircase was removed when the entrance was switched to the parking lot on the other side. 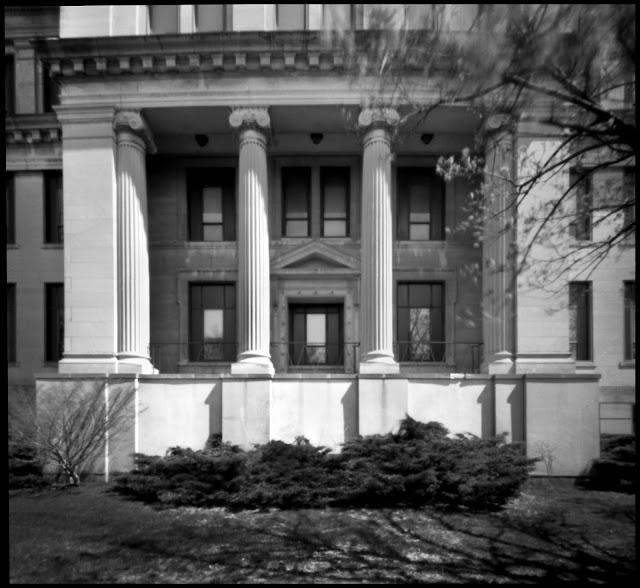 The classical facade was perhaps intended to elevate the perception of the Orville Beach Manual Training School built in 1912. When the high school next door was built by the same architect a few years later, it’s facade was probably intended to match this one. 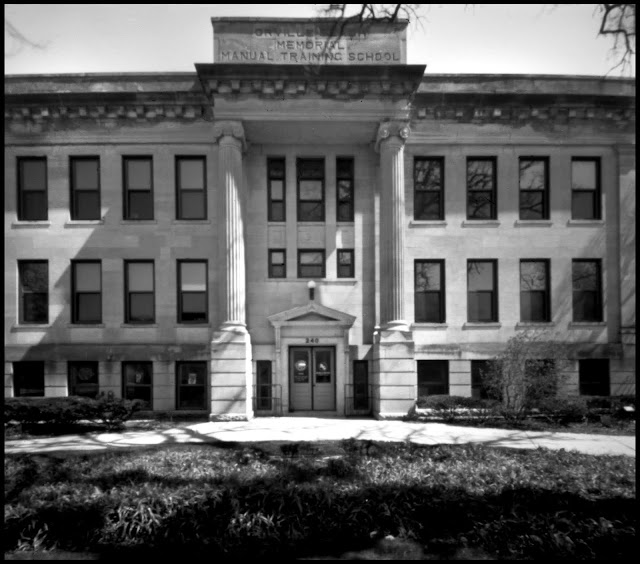 Sometimes the columns were abbreviated to just fluted brackets supporting a pediment to hint at classical style. 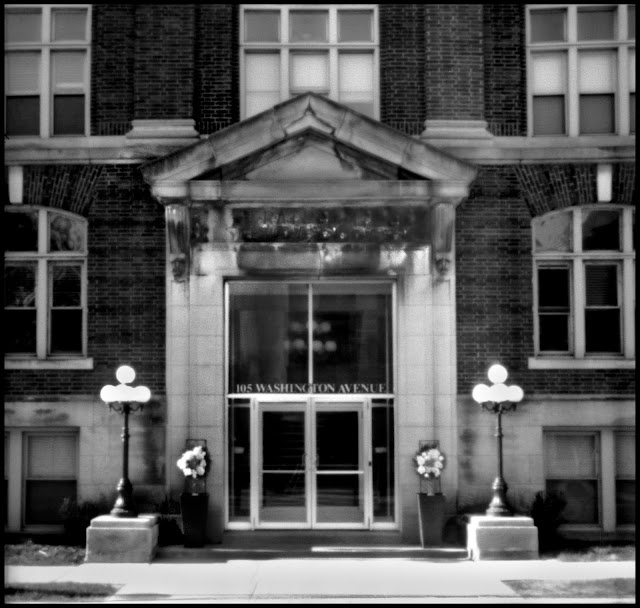 Occasionally a classical detail just seems to be tacked on. This pediment is above a side door which leads up to the second floor meeting hall of the Fraternal Order of Odd Fellows. 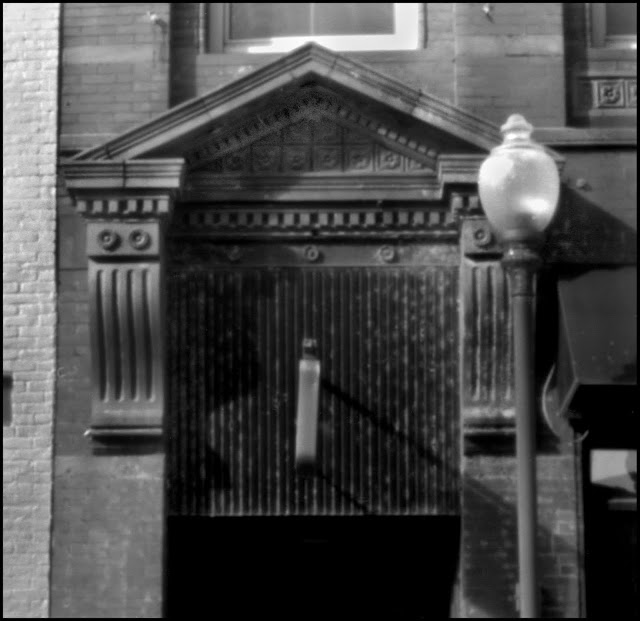 The Oshkosh Northwestern newspaper’s 1930 addition was probably hoping to reference Herodotus’ innovation of history as factual record rather than myth, as well as the Greeks contributions to written language such as the introduction of alphabetic characters for vowels and left to right reading order. 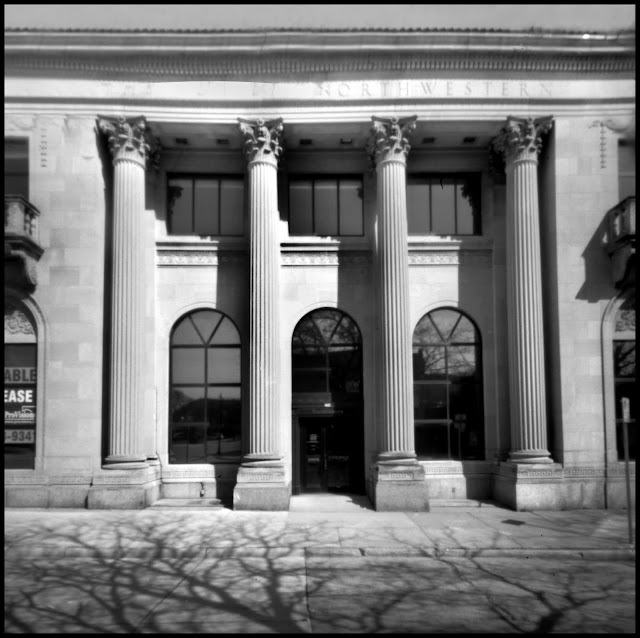 Another downtown building associated with the printed word is the Goettmann Printing Company building from 1925, just across the street from the Library and Masonic Temple. 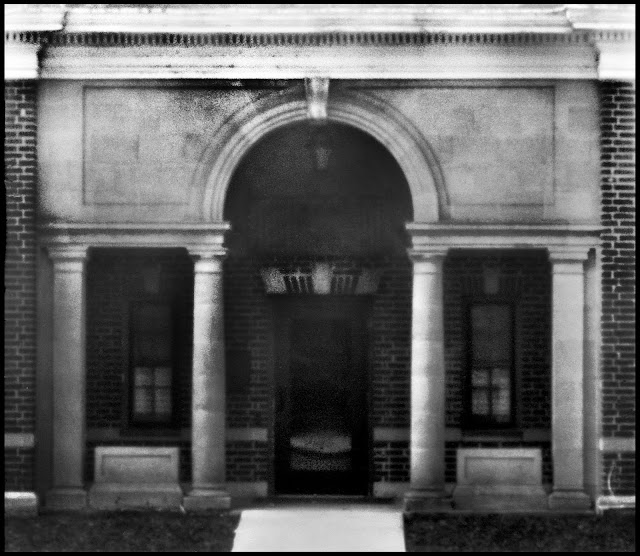 Churches are the modern equivalent to ancient temples, although for the First Church of Christ Scientist, the ancient Greeks’ reputation for deductive reasoning may have been part of the motivation. The banner blocking the doorway is another current events detail. 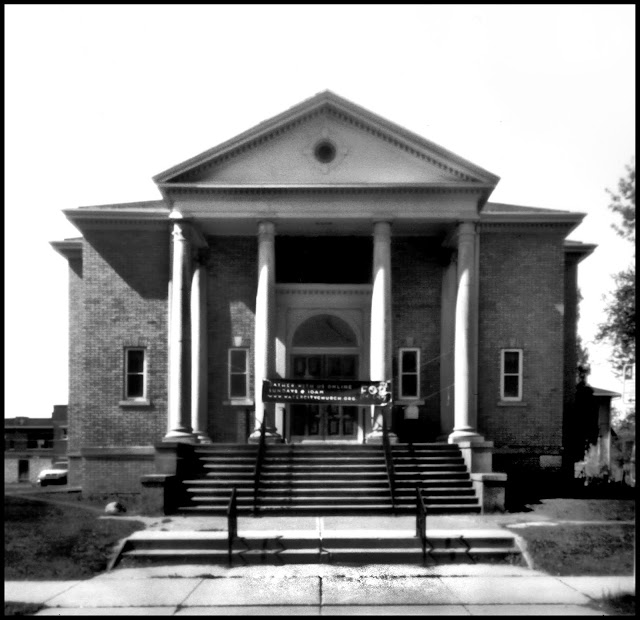 The First Evangelical Church is less obviously modeled after a temple. The classical entrance just seems to have been grafted on an otherwise normal church. 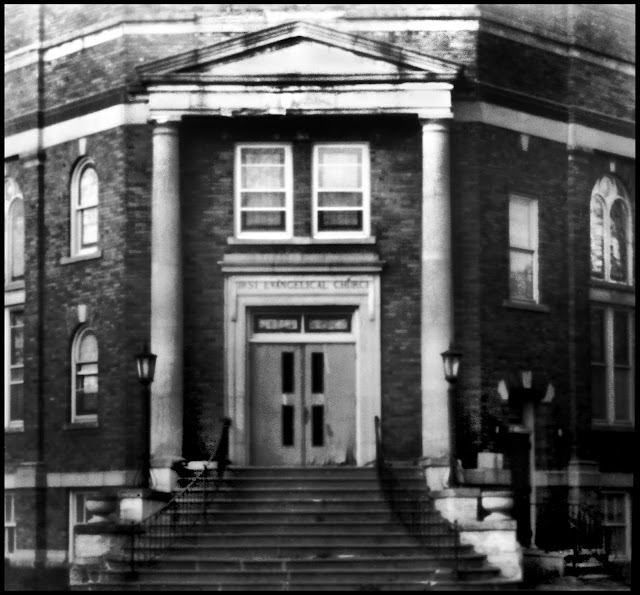 I don’t think the the Yacht Club was making any reference to classical Greece but was just trying to be stylish and maybe a bit pretentious. 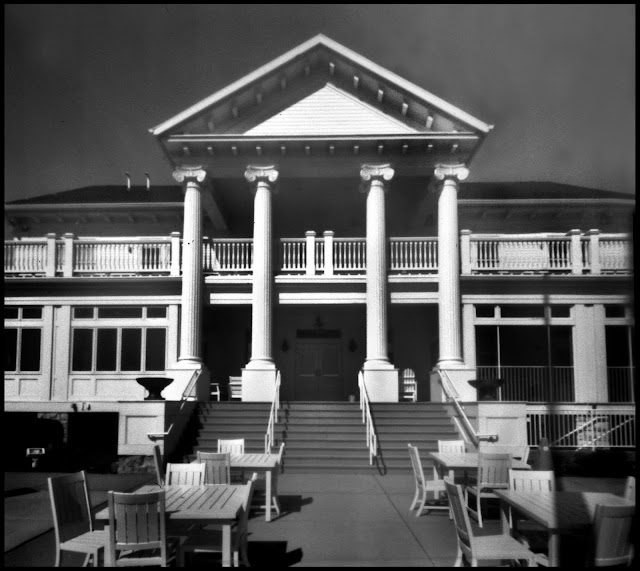 There are lots of little temple-like mausoleums in Lakeside Cemetery. The one for the Paines, a lumber baron family, most resembles a miniature Parthenon. 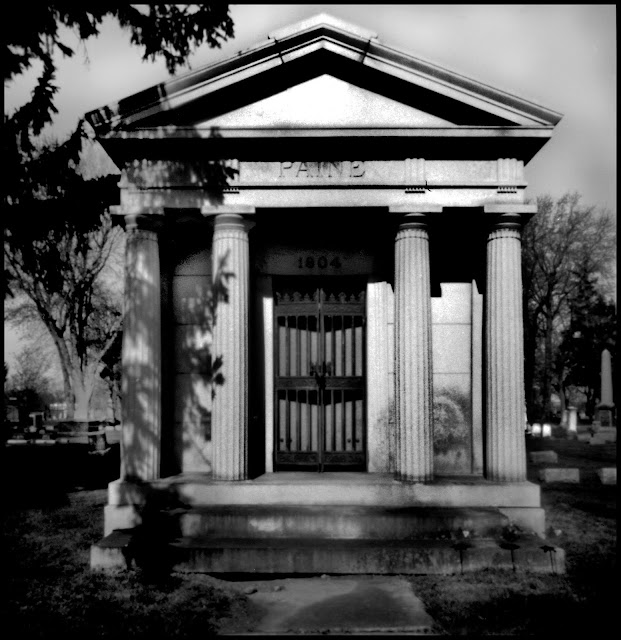 It was probably built by the H. F. Wenrich Granite Company who built themselves a monumental headquarters on Main Street. 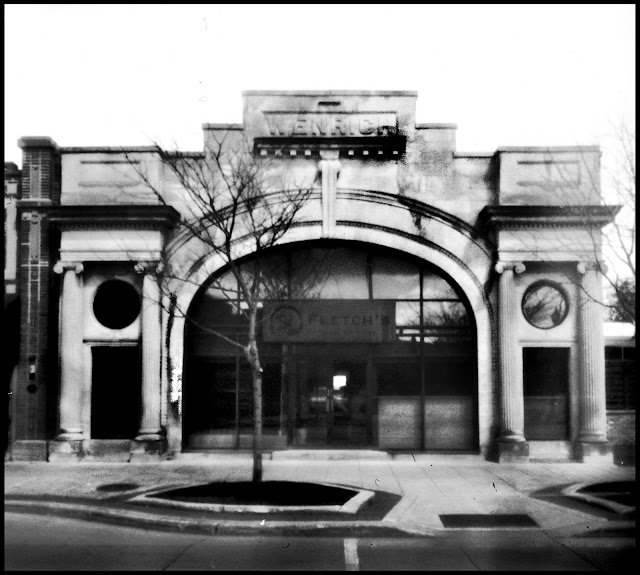 This style was also popular in domestic architecture as featured in the portico of the 1929 Temple Hanson-Dvoracek on Central St. 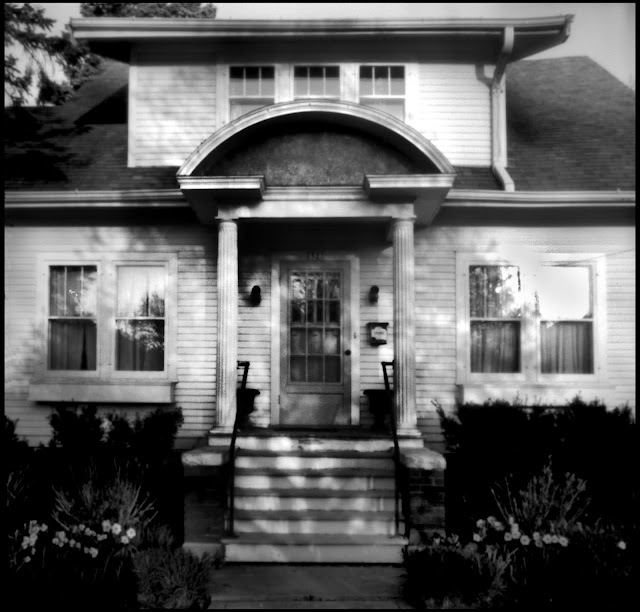