In millions of photography classes, Ansel Adams’ The Tetons and the Snake River is displayed in the lecture on composition. The instructor notes how the S-curve of the river reflecting the sky gives the eye a lazy path back to the majestic mountains. Entire tutorials on-line are dedicated to this sort of compositional technique, often folded into a discussion of leading lines. Funny how that Google search turned up dozens of photography sites and none about sculpture, painting or drawing. It’s almost as if they know who I am.

I must have learned this lesson well, because as I ride my bicycle around Oshkosh, I constantly see examples and think to myself: “Well, there’s an S-curve. That would make a nice composition.” Maybe if I took photographs of them it would help me get over this.

Parks are a common place to look, especially where modern trails have been built among existing mature trees. One way to highlight the curve is to photograph into the low sun so the light is reflecting back toward the camera. Getting a little higher viewpoint helps counter foreshortening and opens up that S, as with this view from the bridge over the inlet to the lagoon in Menomonee Park. 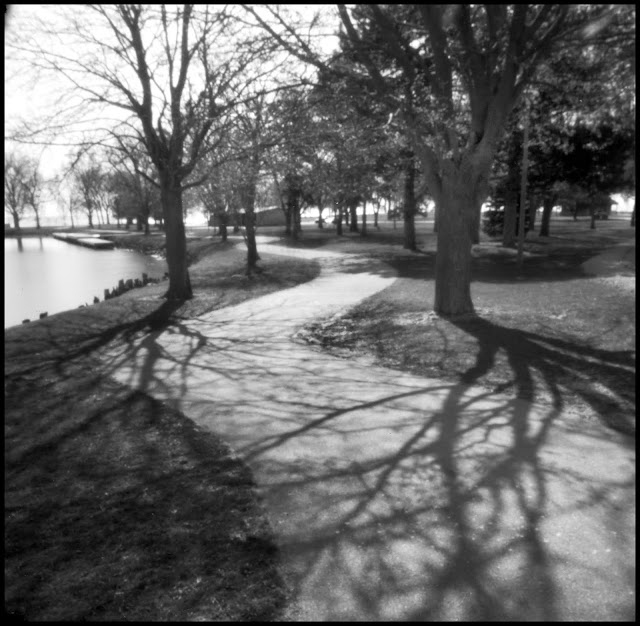 The shadow of the trees in the foreground almost overpowers the curve I’m trying to exploit. The dappled light overlaying the curvy trail makes a more complex, if not as unified, composition. 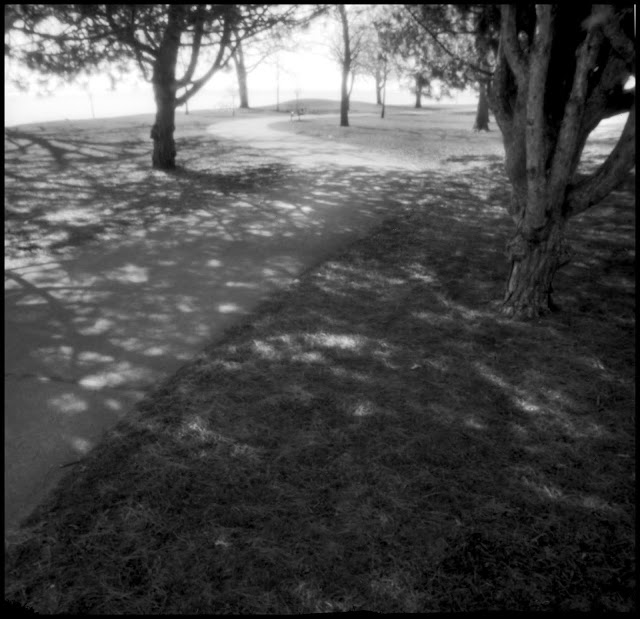 A little bit of a wavy path makes a ride on a miniature railroad a little more compelling as well as a photograph of the rails. This was the subject of my submission for Worldwide Pinhole Photography Day in 2005, although with a little softer lighting. 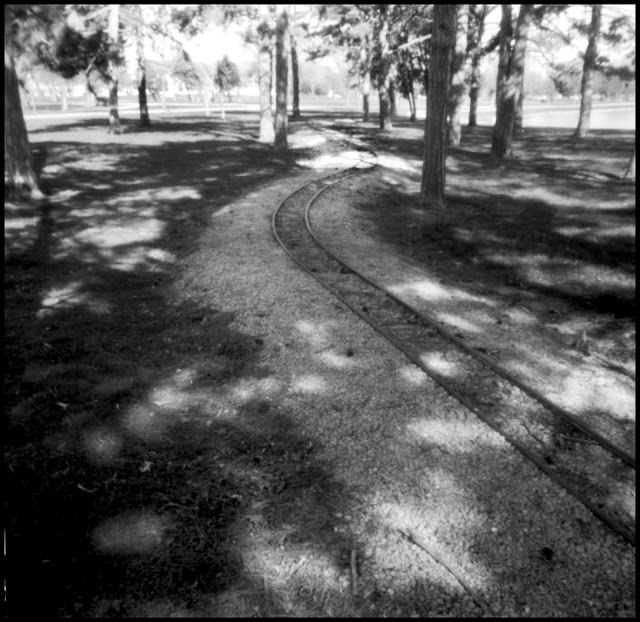 Sometimes, as here along straight Merrit Avenue, the winding path is purely a design choice, 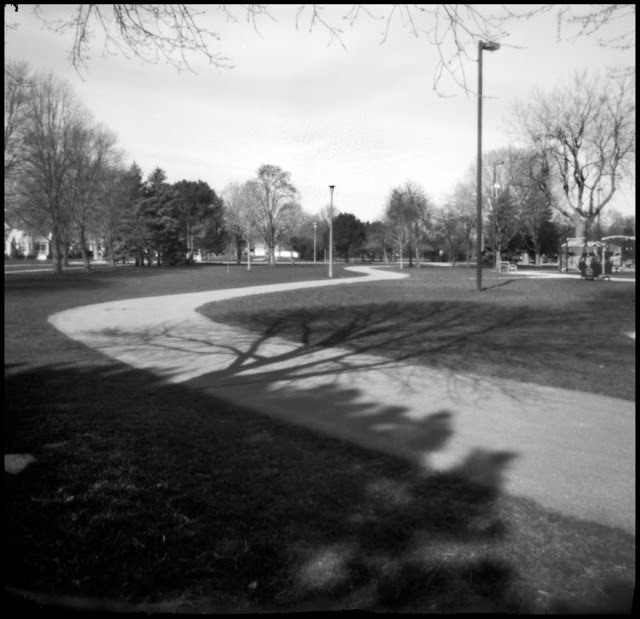 Here the curve is just another element decorating the background of the the County Park Free Outdoor Gym. 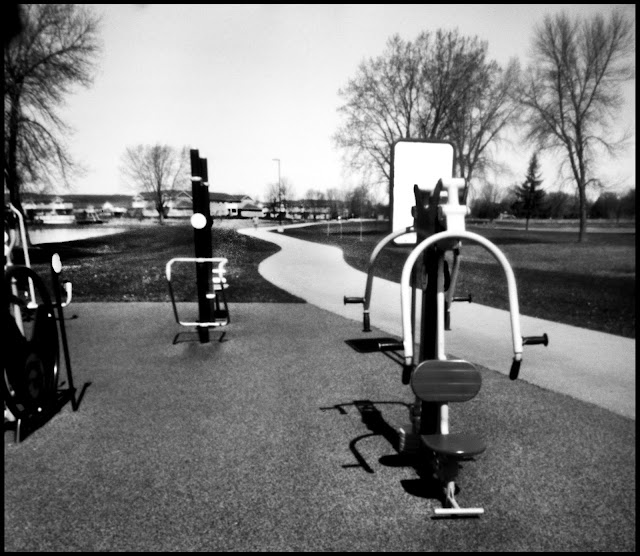 Sometime, your stereo vision and 3-D brain trick you into thinking something is going to form an S-Curve in two dimensions. This is one where getting higher off the ground would’ve been of help. Ansel Adams had a platform on top his 1942 Pontiac Woody so he could get a higher viewpoint. I wonder if it would help my photography if I got a seven and a half foot tripod, and a collapsible ladder and an electric cargo bike so I could use it. 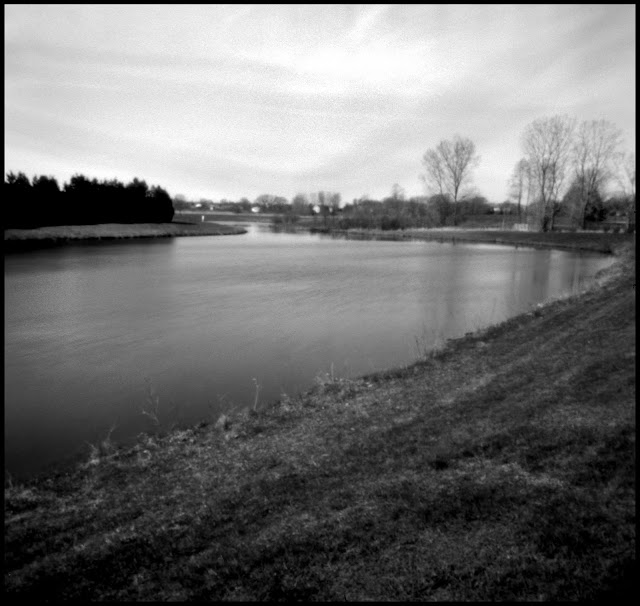 Like the Snake River, Sawyer Creek reflects the sky to define the shape of the shore line as it meanders through the Evergreen Village Nature Walk, seen here with the benefit of the bridge over it on Westfield Street. 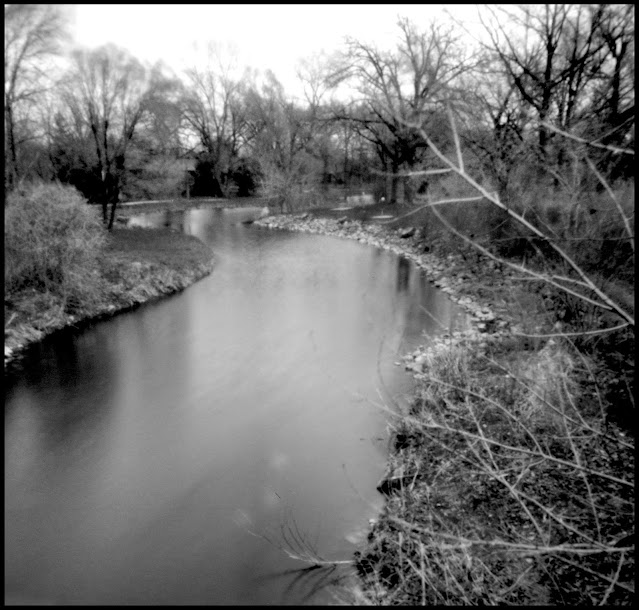 Honey Creek’s path through someone’s suburban back yard is defined by the rocky embankment meant to exert human control over any changes to where it’s going. Again from a bridge, this time on Oakwood Road. 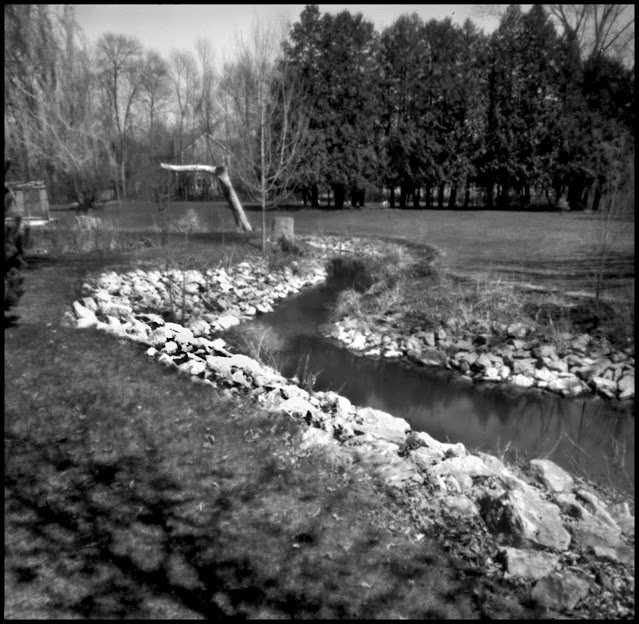 City streets normally don’t provide any of the wavy views, but out here in the suburbs they’re common, more to control the speed of traffic than for any visual appeal. The sidewalks, lawns and streets make multiple parallel curves. Despite the sunny day, I seem to have made this neighborhood look cold and forbidding. How’d that happen? I do occasionally see people outside in these places, but they mostly seem empty and deserted when I ride through them. It is fun to ride fast on the nice new empty streets, 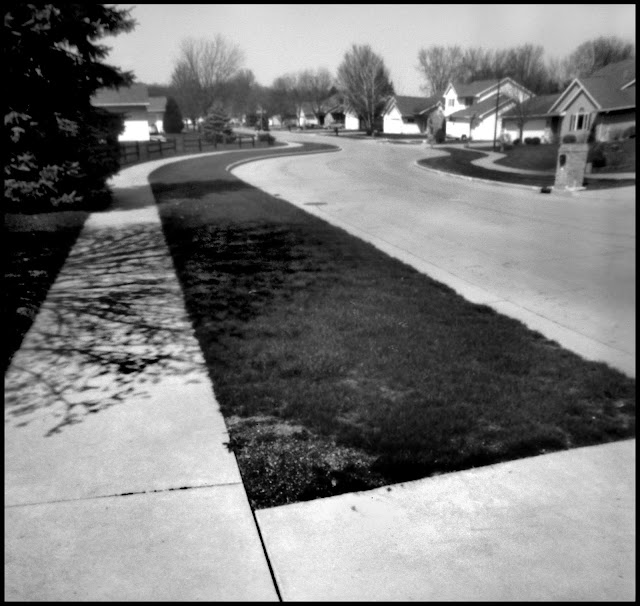 Curvilinear trails are not that unusual through natural environments. This one isn’t a result of the lay of the land. It happens to be where a spur line broke off the main railroad whose right of way was repurposed to make the Wiowash Trail. 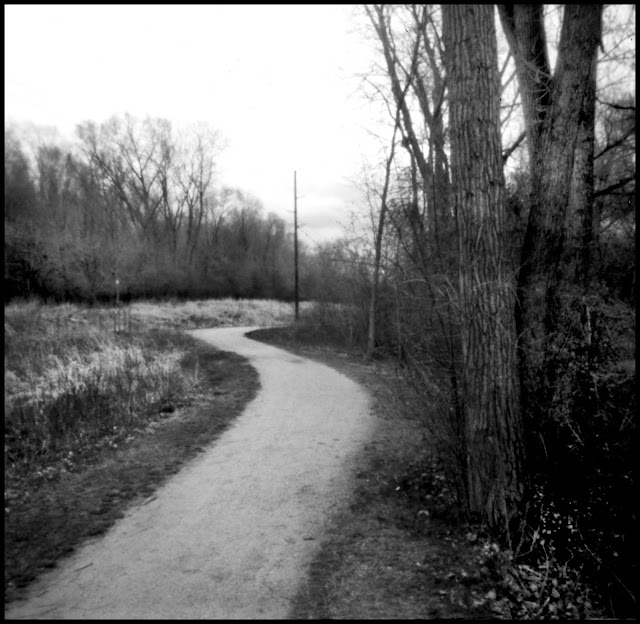 I think I went overboard with the sun and shadow so it’s a little hard to see the sharp corners of the boardwalk that make up a variant of the S-curve - the Z. The city apparently feels it’s just as dangerous for bicycles. 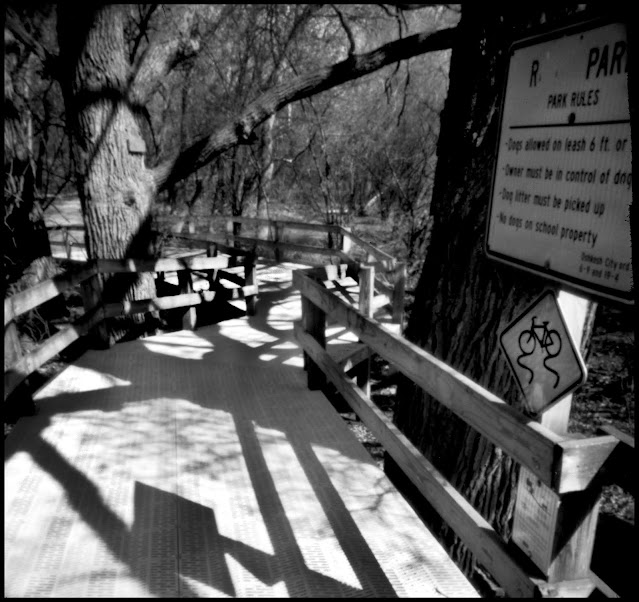 These were all done with the 60mm front for the 6x6cm Variable Cuboid - .3mm hand drilled pinhole. I had the front at its maximum rise to try to fake having a higher point of view on most of them. The film is Ilford Delta 100 semi-stand developed in Rodinal 1:100.