This year for Worldwide Pinhole Photography Day, I built special cameras for Sarah and I. However, both had problems and I've been reworking them ever since.

Sarah's is made of out of the box from Chanel No. 5 perfume. 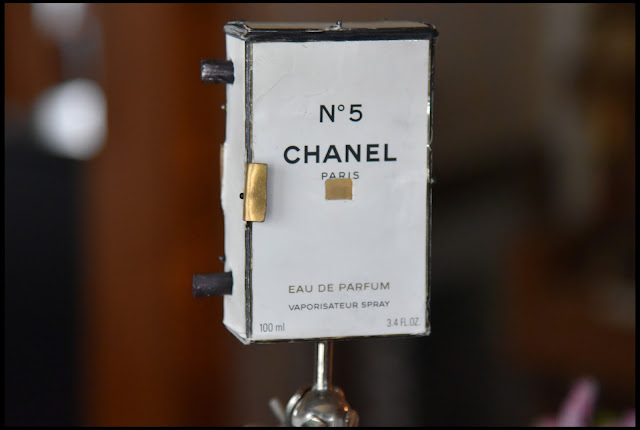 In the early '80's, Ruth Thorne-Thomsen was the juror for the student art show at the small liberal arts college on the praire where I was teaching photography (as well as running the AV department). 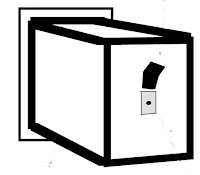 She also gave a Saturday workshop where we built and used cameras similar to the one she had been using.  It was made of of matte board that was black on one side (the inside of course) and white on the other.  The seams were lightproofed with 3M #235 black opaque photographic tape.

The minute Sarah saw it, she thought it looked like Chanel packaging. and ever since considered the boxes she acquired as potential cameras. 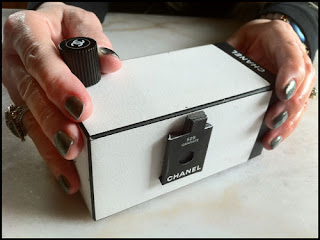 Finally, for Pinhole Day in 2012,  I built her a 35mm camera out of the box for a No. 5 spray refill and the top of a nail polish brush and the little box the nail polish came in, which she also used for Pinhole Day in '13 and '14.  It's about 50mm pinhole to film with a 24x50mm image format, determined by the dimensions of the box.  It's pretty narrow angle (for a pinhole camera), and a bit difficult to accurately compose with.

This new perfume box was a little bigger and would just accomodate a 6x6cm frame on 120 film and would be much wider angle.

I wanted to preserve the design of the box and not cover it with an external shutter, so I made a three layer sliding shutter out of black card stock,  but used brass for the slider itself in order to match the black, white and gold scheme of the box, and attached it inside with the shutter coming out a slot on the side.

There is an identical shutter for the film counter in the back.

The tripod mount is a brass nut inlaid into a piece of foam core that's glued to the bottom.

I made a carrier for the film and exposure chamber out of foam core and card stock. Because the box wasn't quite wide enough, I had to flare out the inside dividers over the film a little to make the image 6x6. 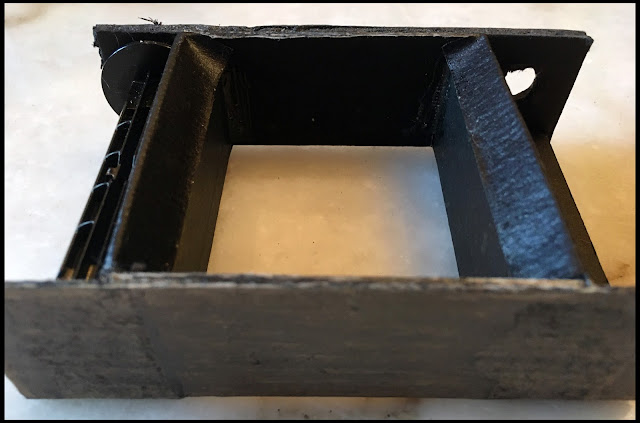 The film is loaded about how you would expect. 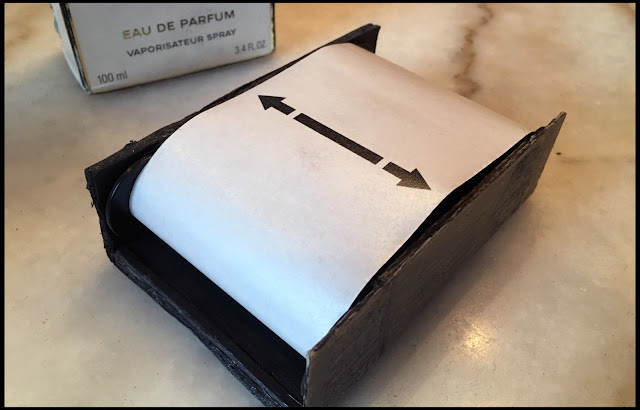 The film carrier is then inserted into the box. 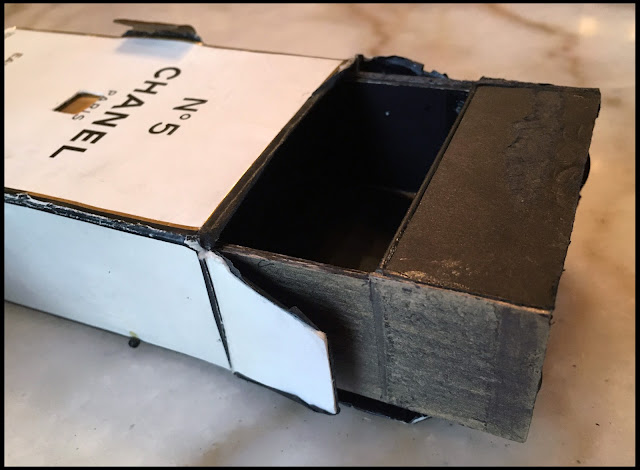 The front shutter assembly extends just to the top of the exposure chamber on the top and the top of the front of the film carrier extends out a little so it seals the exposure chamber when the film carrier is inserted.  Since the front and back were covered by the shutters, the bottom by the tripod mount, and both sides of the film carrier were black foam core and the top was covered with 3M #235, I thought the camera would be light tight.  It turns out the sun shining on the white exterior creates a powerful source to sneak in through the smallest cracks, and on WPPD, the whole roll was completely exposed.

So I completely covered the inside of the camera with 3M #235.  This made the film carrier fit too tightly so the film wouldn't advance, and I had to completely remake make it slightly smaller.  I also left room for an extra light baffle at the top.

The winders are 3/8 inch oak dowels with the end sculpted to stick into the slot of a 120 spool.  They're only held in by friction, but they're pretty tight and they're still a little hard to pull out.
\
Viewfinding is done with black sighting beads at the pinhole and the limits of the film in the back.

The 30mm pinhole to film distance (determined by the dimensions of the box, of course) is pretty close for 6x6cm images, so it's quite wide angle, 90 degrees.

So, how's it work?  Not bad. The film advances like butter, and the shutter's are smooth and stop convincingly at full open and full close.

Here's the first shot after the upgrades with that most convenient and cooperative model. One of my attractions to the larger format is that highlights don't seem to block up and overflow as badly as they do on 35mm, so effectively you have a little more dynamic range.  I shoot in some pretty contrasty places and my objective is to mimic human eyesight as best I can, so that's a positive attribute, although I can't say I get an impression of additional sharpness otherwise over the Populist - maybe with big enlargements. 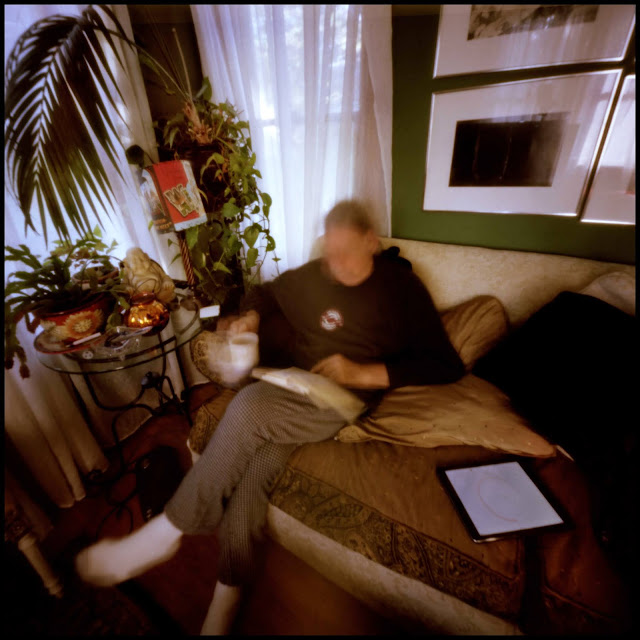 Of course there still are limits, but sometimes a little more contrast is called for as with this portrait of a visitor during the Halloween season. 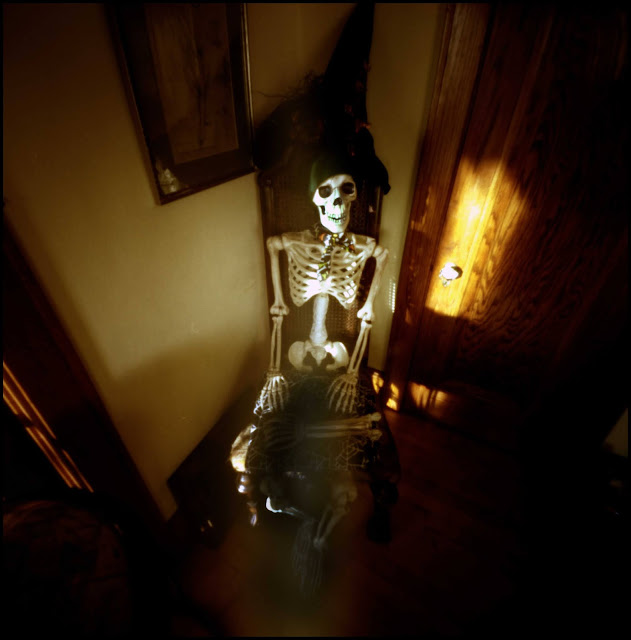 And, Sarah and I enjoying lunch on the porch on one of the last days warm days of the fall.  There's a little bit of vignetting in the corners (I expected it to be much worse), but overall I'm pretty pleased with the evenness of the exposure. 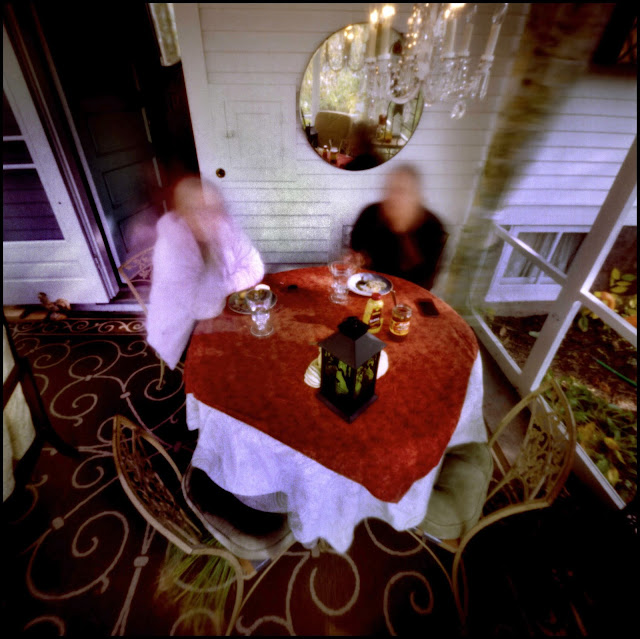 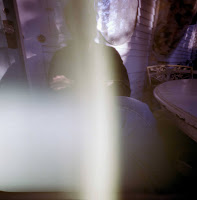 It looks like there's still a bit of a problem with light leaking when the camera is left a long time.  It sat in the kitchen window quite a bit so the sun shown directly on the top quite often.  I think I'll put some felt on the flap of the top of the box to try to seal that up, and with this camera, maybe a nice felt bag with some gold lettering to keep it in between uses would be appropriate.  I'll have to check the Chanel catalog to see if something like that comes with something I could get Sarah for Christmas.

Sarah already had a bag exactly like I was looking for.

Posted by Anonymous at 9:34 AM