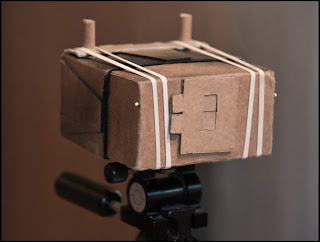 I've been carrying around the Moderately Telephoto Pinhole Camera in a Plain Brown Wrapper lately and came to think the camera wasn't completely opaque. It seemed to be fine in lower light situations around the house and on cloudy days, but out in the summer in bright light there seemed to be a few very dense, low-contrast negatives which were denser at the top and bottom of the negative than in the center as if there were photons sneaking through the back and over and under the opaque backing of the film.  If an image was done just after another so it wasn't in the bright light as long, the problem wasn't apparent. The inside of this camera was painted with black interior latex paint. It sure looks opaque, but it could pass some light in the bright sun or when the camera is out for a while even in cloudier situations.

So I put four heavy coats of black Krylon on the inside.

I recently wondered why long image forming objectives were called by the greek-derived word telephoto and short objectives were just referred to by their wide angle of view. It turns out that a telephoto lens is one with a special group of lenses that makes the overall device physically shorter than it's nominal focal length.  I can't use that term for a pinhole camera.

When painting it, I didn't mask off the outside and got quite of bit of paint spatter on it, so it's not in a Plain Brown Wrapper anymore. The punk look of the paint spatter is kind of cool.

So henceforth it shall be called Long John Pinhole!

There's a long tradition of long things being named John.  There's Long John Silver, the archetype of a pirate whom we all speak like in September. Long John Baldry was a favorite member of the British Blues movement.  The one piece union suit workers wore to deal with unheated factories and farms are Long Johns.  An elongated cuboid of fried pastry dough covered with icing is called a Long John.

So out around town in the sunlight to see how this worked out.

I've noticed the way the morning sun lit this back wall of The Light Of The World, Church Of The Living God, Pillar And Ground Of The Truth, on previous bike rides and returned several times to try to photograph it.  On separate occasions I encountered: three children playing in the front yard next door; an ugly giant SUV parked in front of it; garbage day; an occupied police car parked across the street; and the entire congregation restoring the inside. Finally, last week I got there and the light was perfect and the whole block was deserted.  With just Long John Pinhole along I needed to be out in the street a bit to get the wall parallel to the film.  I worked out the distance, leveled the camera and measured the exposure while still on the curb. After stepping out in the street and starting to adjust the camera pointing, a young women came out to let her dog pee, which appears in the lower left corner.  I explained that I was taking a photograph of the church.  She didn't reply. 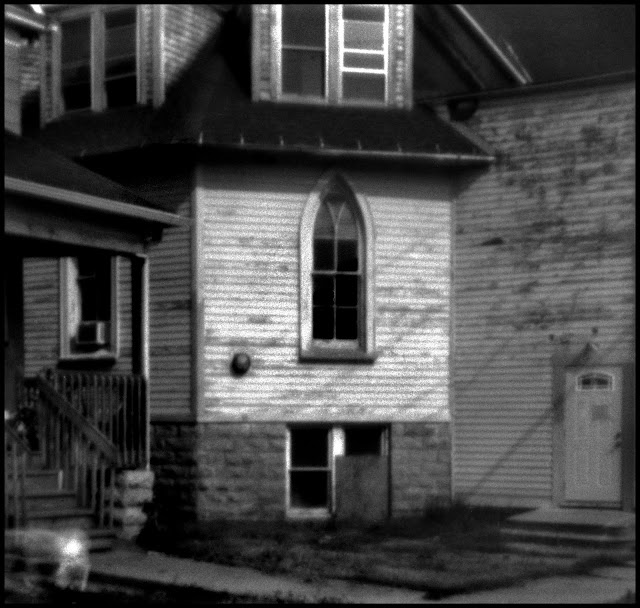 While on the subject of churches and putting a tripod in the middle of the street, I've photographed this scene before, but with a 45mm camera.  With Long John, it's much safer on the curb and the compression of the narrow angle makes the proximity of Boots Saloon and St. Mary's school and church more pronounced. 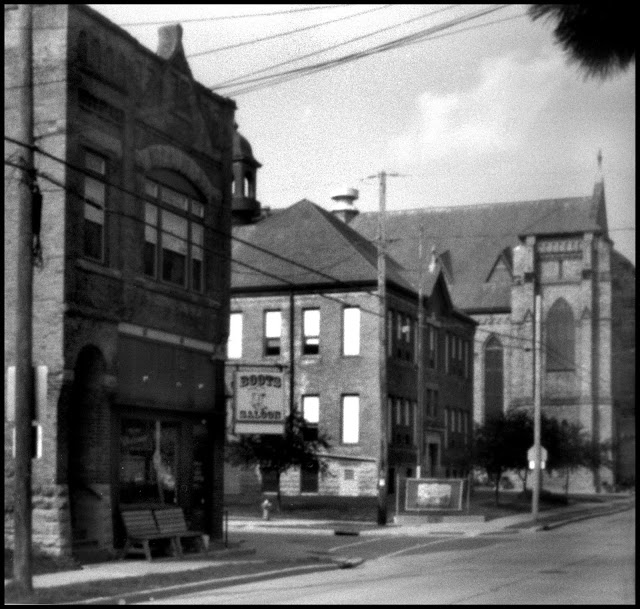 The Howard is a newly restored event and performance venue.  It used to be the Eagles Club.  When Andy was in high school the Madrigal Dinners were held there, the first gig of his band Independent Rain took place in one of the smaller rooms in the front and for a few years the Winter Farmer's Market was held there with a full bar available. It's visible for a mile with the First National Bank looming behind it when you look straight down School Street. As you get closer and the relative distance to them changes, the bank recedes until it's just a detail in the background. 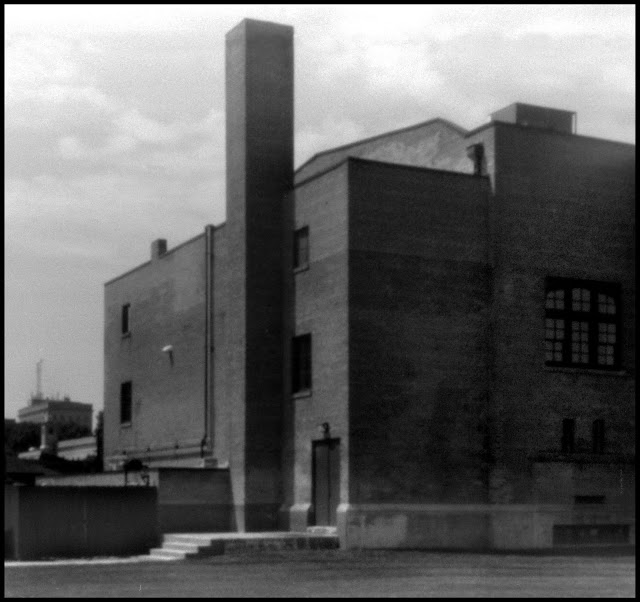 I had noticed the stairway and various balconies on the side and came back to photograph them in the morning light.  When I saw the ladder leaning on the wall, the spirit of William Henry Fox Talbot overcame me. I parked my bike near the street, set up tripod and camera, and then walked into the parking lot toward the building to frame the picture. Turning around after closing the shutter, there were three workers I hadn't noticed sitting on the back of a furniture truck taking their coffee break, watching me. Assuming they wondered about the cardboard box, I told them I was taking a photograph.  One replied that he guessed that, and wondered of what.  I said "Lines, shapes, shadows. A historic building. It tells a story."  He said he could understand that. 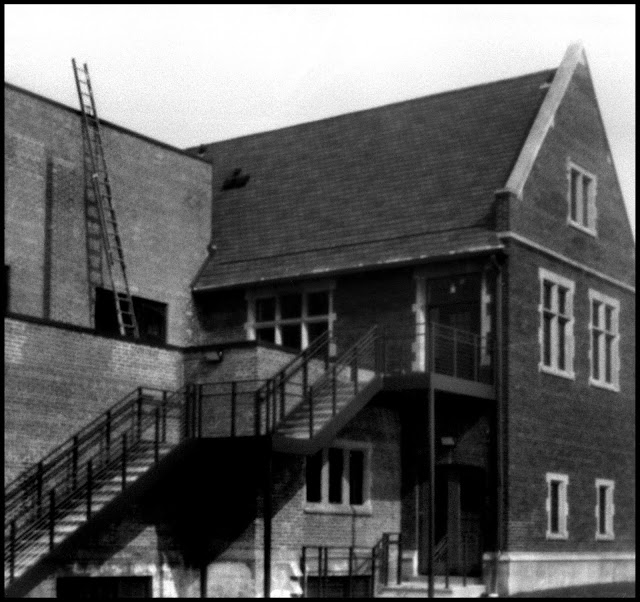 Practically across the street from Merrill School is Firehouse No. 8, most recently housing a public relations firm and two posh apartments, and now for sale. I wonder if the tower is part of one of the apartments. 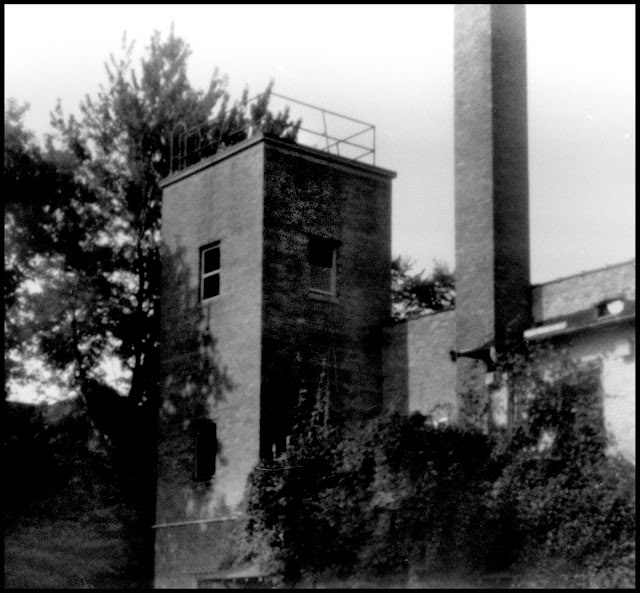 There's an apocryphal story that at the meeting to incorporate the city in 1853, it was named after Chief Oshkosh because the recent settlers from the east, who called their settlement Athens north of the river and Brooklyn to the south, split the ballot and the otherwise minority earlier French and Indian residents voted for the name of the chief and won. This memorial to Chief Oshkosh was created in 1926, 68 years after his death. It's currently being restored.  There's some doubt that it's his body buried there and just about everything about whole memorial is erroneous.  He had a pretty challenging life. In 1827, The U.S. Government got impatient dealing with a loose conglomeration of Menominee leaders spread over half of Wisconsin and appointed him chief so he's the one who shows up on some pretty sketchy treaties.  He did keep his people from being relocated to Minnesota and on the reservation he negotiated for, set up a sustainable logging operation which is still running.  Later in life, he got pretty disillusioned and died in a bar fight. In an ironic twist, between the logging and casinos, the tribe has done quite well in the 21st century and purchased the naming rights to the new Menominee Nation Arena on the south side. 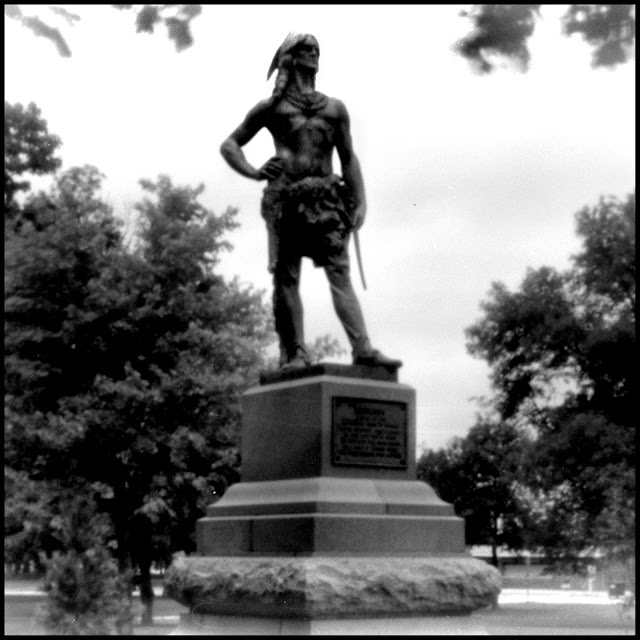 So did the extra layers of paint fix the problem with my negatives? I'm not sure. The dense areas on the bottom are gone, but there were a few negatives that had the issue at the top and overall fogging.  I now think what's going on is plain old fashioned overexposed skies being diffracted by the smaller than optimum pinhole.  I did the digital equivalent of burning through the density and using a number 4 filter and got some kind of dreamy looking scenes people often associate with pinhole.

I wanted to show both sides of the north inlet to Miller's Bay but I missed and you can just barely see the tip of Ames Point on the left. 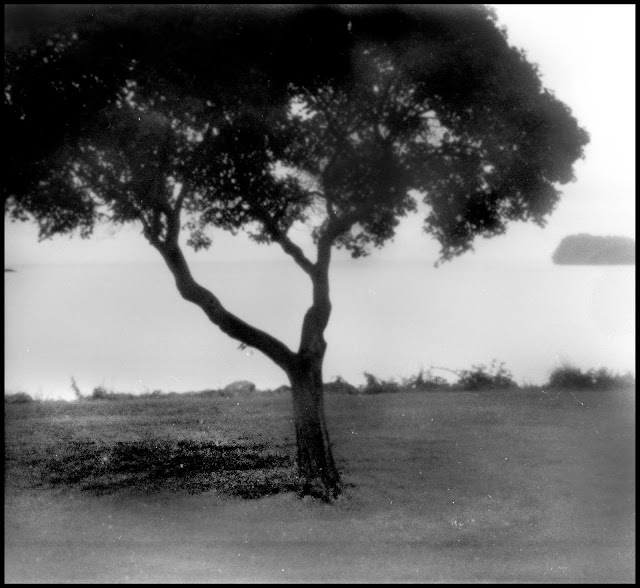 The south end of Miller's Bay is enclosed by Monkey Island, a settling pond for the city's water supply.  There's a second inlet between it and the park. 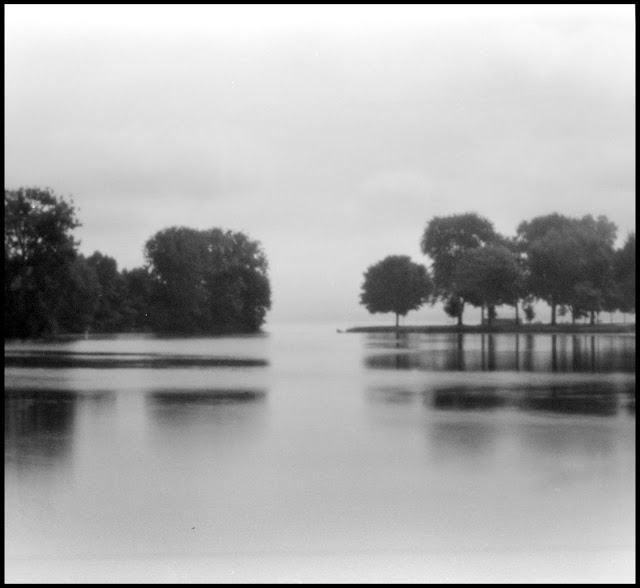