The last camera I built before the Populist shares almost all the features that I eventually put into the Populist design.  This was before I had the idea to design a camera anyone could make.  I don't remember why I made this camera so soon after the Nickon. I made and started using it just before my experiments with the Matchbox Camera, and then returned to it for awhile after the summer kids' workshop until I started working on the Populist later in the summer and fall. 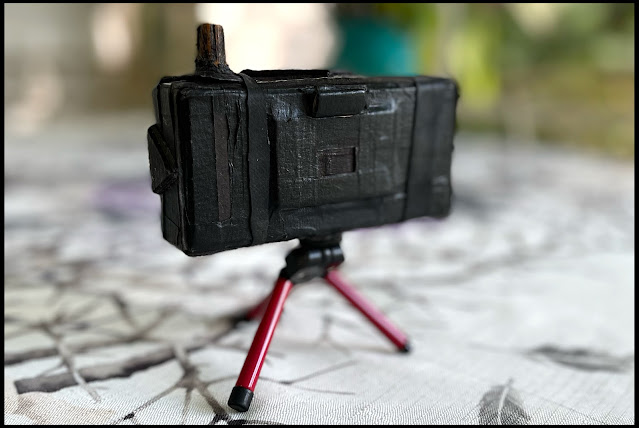 It's built on the same Populist plan of the front of the camera being a box with some internal dividers which hold the film and form the exposure chamber, and another box for the back of the camera which fits snugly over the front.

It's made from some pieces of acid-free solid black mat board which were left in the lab by one of our student graphic artists when she graduated. Unlike the Populist which is made out of thin cardboard from a flat folded pattern, these boxes were made from individual pieces that were glued and taped together. 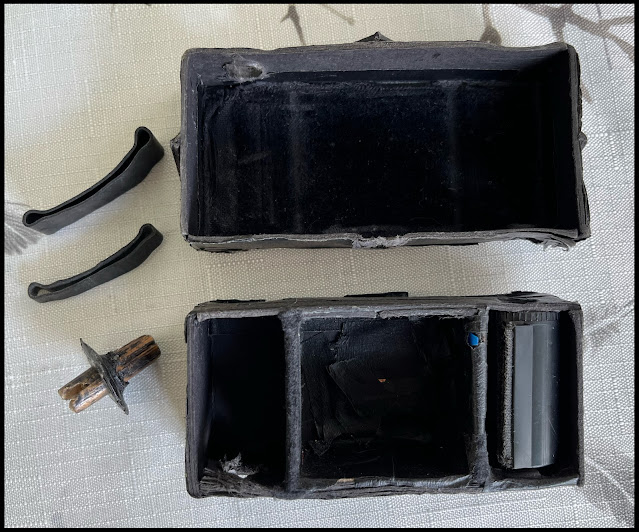 It has a 24x50mm semi-panoramic format 24mm from the frame for an ultrawide 92 degree field of view. Eleven clicks per frame. 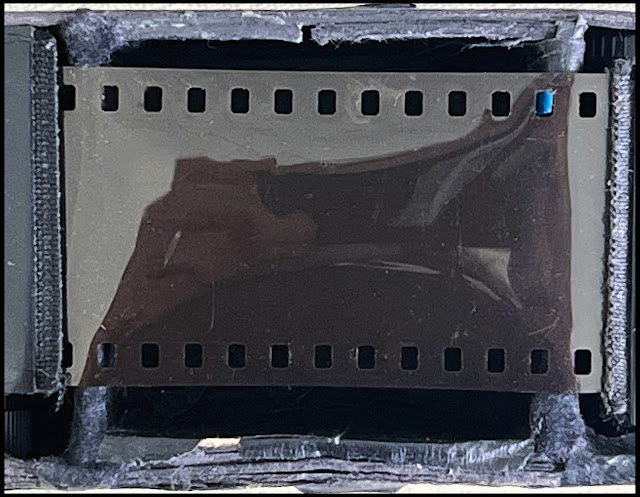 It had a very simple sliding shutter at one time, but I replaced it later and added new 3D finders. 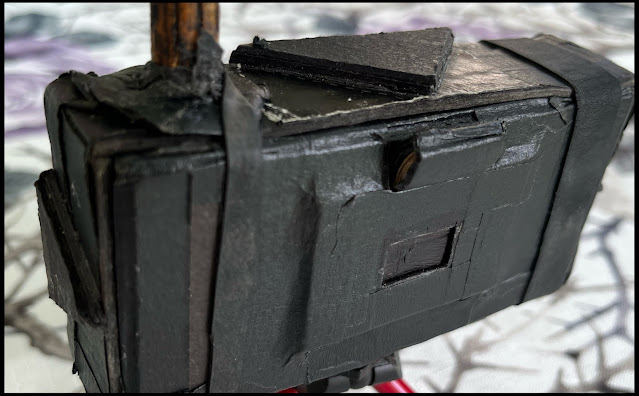 I again covered the surfaces the film would ride over with felt, the last time I bothered with that.

The tripod mount is slightly different. I must have had trouble mounting the Nickon and knew those two layers of heavier card stock would be too much for many tripods. I just inset the nut in the bottom of the front. The tripod bolt then goes through a barely large enough hole in the bottom of the back, which holds it on.
With the first iterations of the Populist, the internal dividers were each separate pieces with flaps to attach to the bottom and top of the box. It was hard to get them attached squarely in exactly the right spot, they tended to get warped as the film dragged across them as it was advanced and they occasionally just came loose. While contemplating this problem, I just happened to look inside this camera when reloading it and discovered that I had solved it six months earlier by creating a single piece that folded into a rectangle which defined the image area.  It was easier to line up since once you aligned one side, the other side was automatically parallel the correct distance away, it had a larger surface for glueing, was easier to clamp, and was much more rigid. 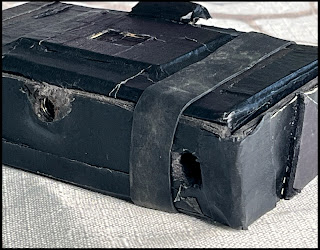 This was the first camera where I made a second hole for rewinding. The film is contained inside a cassette in the film chambers and the exposed film should be sealed off by the dividers so you can get away with a hole in the supply and take-up chambers.  I put the hole in the bottom so when you rewound, you turned the winder the same direction as for winding and it just doesn't look right to have a hole in the top of the camera. A lot of camera makers put a separate winder for rewinding since you can't easily remove the primary winder, but I noticed a lot of Populists I saw people make used a second winder to fill that hole.  Being a bit OCD about light leaks,  I've always covered this hole with a thin piece of card stock inserted between the two boxes except for when I was actually rewinding.
I put a label on it with a handy exposure table. I didn't record the f ratio but I know I used a .15mm Gilder electron microscope aperture. The distance to the pinhole is 24mm which I chose because that's the diameter of a film cassette, and I've always liked wide angle lenses (although this is actually a little moderate for pinhole).  I returned to the 24x50mm format I had used in the Florida camera, again mainly because I thought 24x36mm was a little common, and I think I was intrigued by a lot of panoramic cameras I saw people using on-line.

I used this camera for most of the spring until I started experimenting with the Matchbox camera, and then returned to it after the summer workshop.

My son came home from college for Easter and after dinner treated us to a preview of his upcoming senior recital. This is a 10 minute exposure while he played a piece by Bach adapted for guitar.  He was particularly pleased to see how stationary his right arm was while he plucked the strings.

In the last post I said the Matchbox was the first camera I just carried around in my pocket but now I think I carried this one around for a few months first.

At that time the UW System sponsored a joint geek fest twice a year of about 10 system-wide groups that had something to do with technology. There was always a dinner on the evening of the first day, and this time I sat with a group of web developers.  While we were waiting, they all pulled out their digital cameras and cell phones (this was a year before the iPhone was introduced) and started taking pictures of each other... so I pulled out mine....  (I think the camera was supported sitting on a water glass.)

For that summer workshop for kids, while the Art Department Darkroom was undergoing asbestos abatement, I had to adapt a biology lab for a darkroom. The rooms in this building, which was built when 35mm slides and 16mm films were ubiquitous technologies, especially in the sciences, have metal blackout screens on all the windows. There were still enough gaps that I had to use about a whole roll of black duct tape to seal them for safelight conditions, but it made it really simple to put a "pinhole" in the window to create a camera obscura. A tripod screen from the AV department brought the image plane a little closer. This was pretty cool, because with a half inch hole, this made it about f250, the same as the 4x5 inch cameras the students had been using. Anyway, I documented this with the Prepopulist. 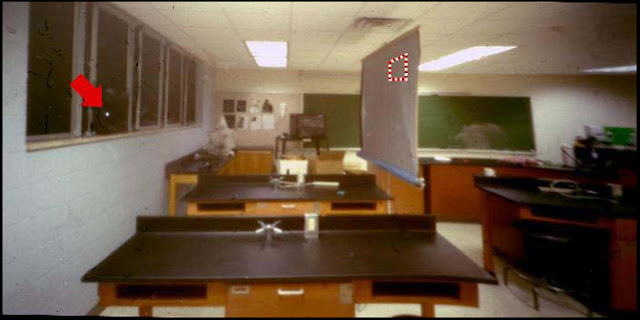 Another document from that workshop – the wet table in the foreground, with the dry table just behind it, with the print exposure boxes to the rear left, apparently taken at about half past twelve, just after class ended.

The garden was pretty spectacular that summer. 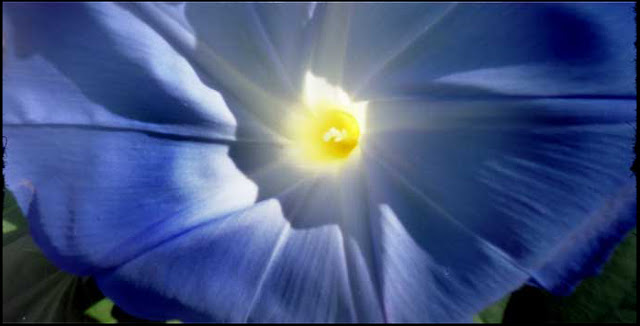 In the same group show in Minneapolis where I showed the pictures of Lake Griffin, I included this shot of a red and white lily.

Years later, when the Populist was in need of a some maintenance, I pulled this camera out again and took it to Mosquito Hill.

Notice the little trail sign on the left that's triply exposed, but nothing on the right side seems to be similarly repeated.  That was kind of a puzzle until I looked at the pinhole under magnification.

Gilder electron microscope apertures are drilled in a 3mm disk of very thin copper.  I mount them by punching a slightly smaller hole in a piece of tape, very, very carefully placing the disk on the sticky side over that hole and then sandwiching it in with another similarly punched piece of tape. This is quite tricky and the pinhole doesn't always end up exactly in the center of the punched hole. This one was apparently just barely aligned, and sometime in the intervening years had pulled away and left this tiny aperture which projected the extra images on one side of the image.

A year before, in 2010, I had used the camera for Worldwide Pinhole Photography Day and had noticed the double image, but thought it might be the result of bumping the camera.  I submitted this romantic picture of Sarah and I lounging in bed surfing the web,  she on the iPhone and I on the laptop.  Later that year Tony Lim of Pinhole HK organized an exhibit in Hong Kong that included a photograph by each of the Pinhole Day coordinators, and this is the image I submitted for that show. 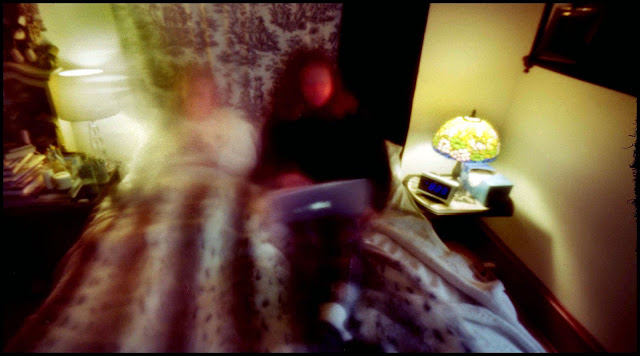 By the end of the summer I was obsessively using various prototypes of the Populist, and eventually the one I've been carrying around for 9 years.
Posted by Anonymous at 2:09 PM