There comes a time when one has to face up to facts and accept that you're just hooked on something. When I started the Populist, I really didn't expect it to become my primary camera.  Is it vain to really like your own photographs? I guess I've always felt that way about my photographs, but what was coming out of what was basically user experience testing was something new. It was like somebody else was taking the pictures. Especially color. But it wasn't just color. I hesitate to called it the impressionistic quality lest Alfred Stieglitz returns from the grave to mock me for it. I experimented for a while with 120, but just didn't get any extra charge out of it (I am re-exploring 120 now though), and I always just had a Populist in my pocket anyway. That was another thing that was a revelation.  Having a camera in your pocket all the time.  While everyone else was experiencing the cell phone camera revolution, I was going through the same thing with a pinhole camera, although I fancy myself more as Brassaï, Kertész or Robert Frank.  Out there among 'em with a Leica M2.

So after about a year, I decided to make one specifically for me. If you hear me referring to the Populist, it's usually this specific camera I'm talking about. 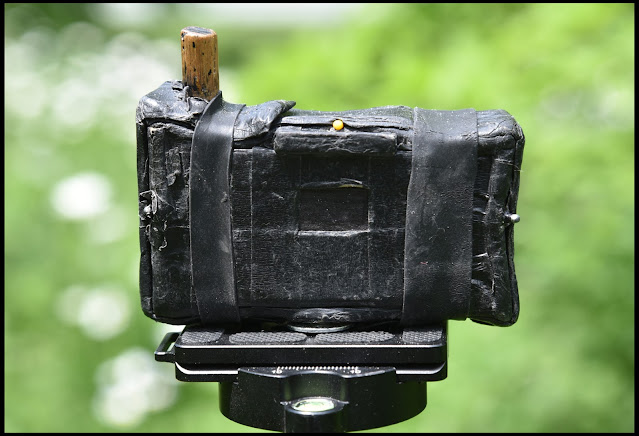 About the only difference from any other Populist is that it's made from some really cheap twenty-five year old black 4-ply Railroad Board, Dick Blick's economy brand sign boards.  I've always liked black body cameras.

The first change was to put a sort of handle at the top of the shutter to make it easier to slide open.

Next was covering it in 3M #235 opaque black photographic tape.  It's perfectly light-tight without it, but the card stock wears pretty fast, and doesn't do well with moisture.  #235 gives it an almost leatherette feeling and although 3M states it's not for outdoor use, it's fairly waterproof – enough to survive running out of a summer shower.

The Populist is supposed to be reliable, but also easy enough to make that anyone can do it. Sometime you have to compromise a bit. The shutter is one spot that happened. There's no mechanism for preventing the slider from coming out when you open it. Friction is the the only thing that keeps it from falling out in general. After losing a couple in the field, I first tried to glue a little stop to the bottom of the slider, but it kept breaking off when I pulled it open. 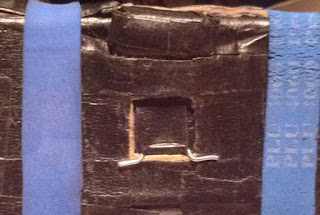 The next change, which I thought of while walking in the woods one day, was to tape a shaped piece of wire (from a paper clip) to the slider with part of it outside the channel. The tape is wrapped up both sides of the slider so it's not as unreliable as it sounds.  It was a kind of tricky operation with exacto knives and tweezers, but it held up for quite a few years.

Occasionally it would come loose and get in the image, and have to be reinstalled. Sometime last year it came off and I lost it, and about a week later lost the slider itself. So I pulled off the original shutter and replaced it with a three-layer shutter with appropriate stops and handle. 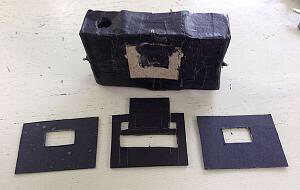 The winder is also just held in by friction. With most film cassettes a 3/8" dowel is just slightly too big and you have to sand it a little to fit, but once jammed into the film reel it takes a bit of a pull to get it out.  But not always, and after a couple of years I lost a couple of those in less than a month. 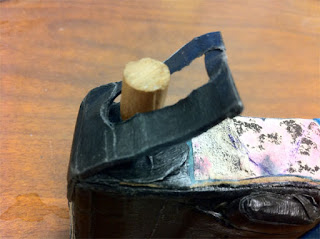 So I made a winder minder from a little strip of beverage can aluminum with a slot encased in several layers of 3M #235 hinged on to the side of the camera which is then held down by the rubber band.

The bottom of the camera where it attaches to the tripod wore pretty quickly, so I added a layer of thicker aluminum from the pop top of a rice noodle can. That's more durable, but it tends to get distorted by the tripod head and next time I happen to have the camera empty at home, I'm going to replace the mount with a bit of wood inside and a T-nut held on by screws.

Viewfinder lines are included on the printed pattern, but they wear pretty quickly too. 3D objects to line up are much better to imagine a line in space (like a gun sight), so after replacing these lines about four times, I added some beads from pins I got from Sarah's sewing kit and covered the rest of the camera with tape.  There was also the exposure chart on the back that was no longer readable, which I didn't really need anymore that got covered too.  By the way I just guess at exposures.  I only measure in the rarest of circumstances, although with my 120 experiments, I'm a lot more careful about that.

Most recently I cut a bike inner tube apart to make black rubber bands and spray painted the winder to complete the professional black body look.

It's no surprise I continued the themes from the Precursers and Prototypes.

I take pictures around the house.
In the garden... 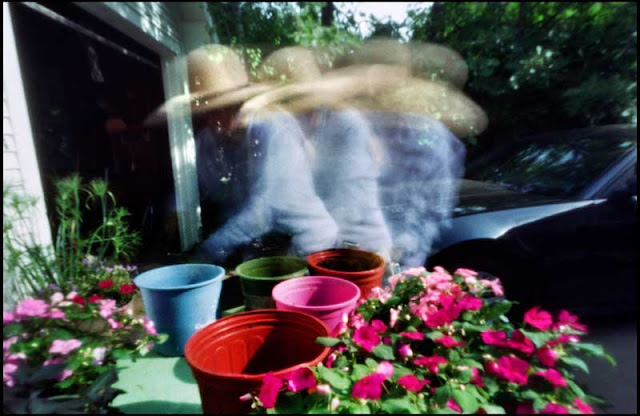 With the cats, mostly Spenser... 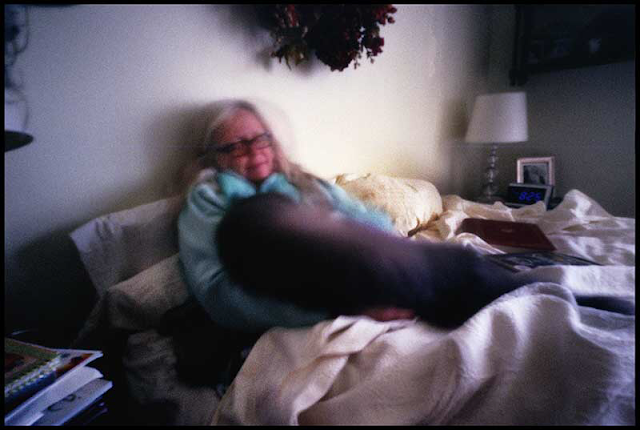 I take pictures on the road. 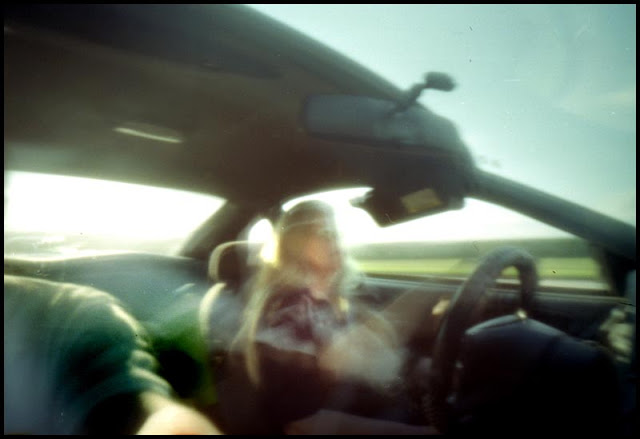 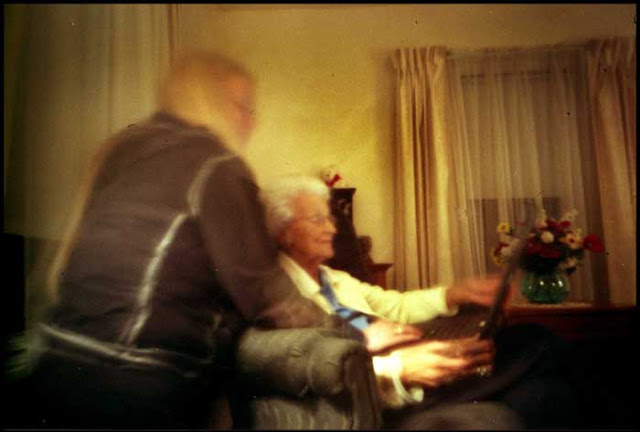 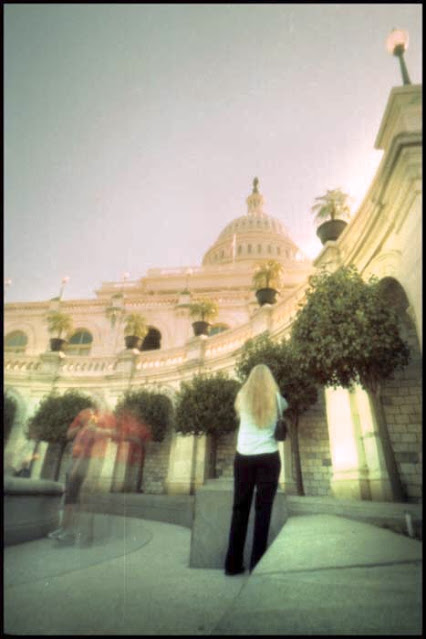 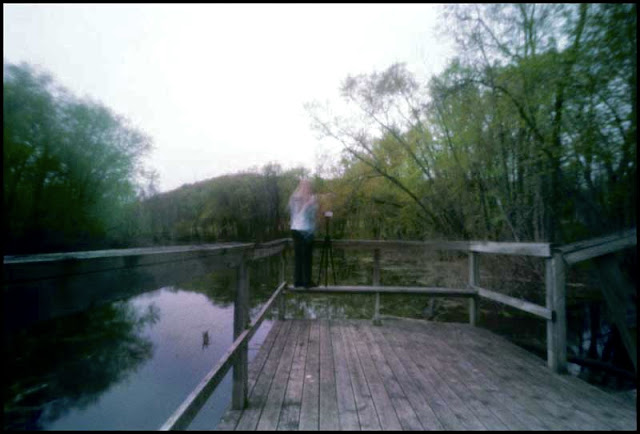 And of course, self-portraits. 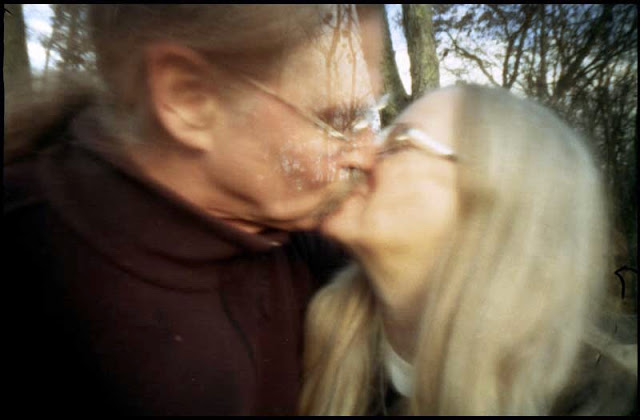 OK, I have to fess up. I just read an article in the Guardian about Emmet Gowin, whose body of work includes many portraits of his wife.

This camera seems to be working out.  I'll think I'll keep using it.
Posted by Anonymous at 12:16 PM