When the coordinator of the local ArtsCore initiative and I were discussing the pinhole workshop, it came up in conversation that I was developing film in home-made developer and wasn't that kind of a pinholey thing to do. The idea that the ingredients in Caffenol had about the same danger to the environment that the waste water from your clothes washer and dishes have also seemed to work with the theme of the event: "Nature and her Tales."

As I began to panic about what I was actually going to do, I put the idea aside, but I've sort of caught up, and since I needed to practice shooting with 4x5 single shot cameras with paper negatives anyway, I mixed up a liter and gave it a try. (Don't you love it when I mix metric and imperial units of measure).

An immediate impression as I mixed it was that it sure was dark. I've been inquiring of teachers that I knew had conducted workshops and one thing they all emphasize about the response from the students was the magic of watching the image form in the developer.  That's not going to happen with Caffenol.  It's got 40 grams of instant coffee in it. Compared to that cup of coffee in your hand, that's probably about 2 to 4 times stronger. It is essentially opaque. Maybe if you were introducing pinhole to a group that already had experience in the darkroom, it would be interesting, but I'd hate to take any of the magic away from the experience.

But I already had it mixed when I thought of that, so I went ahead anyway.

I didn't do any specific research about it, but I've read a bit about Caffenol and never heard anyone mention developing paper in it.  I remember some internet discussion about using the same developer for paper and film so I thought it would probably work to some extent, but how long would it take to develop it?  Would it stain the paper (it really doesn't stain film)? Would you rate the paper at the same ISO rating? What kind of grey scale would you get?  The biggest caveat about Caffenol was that it tended to create background fogging on films rated 400 or over. I didn't think that would be an issue with paper.

I was using Arista RC Grade 2 Semi-matte, rated at ISO 5 in the f250 workshop camera.  It was a sunny day, and direct sun seemed like an exposure I could repeat fairly reliably for comparison. I even metered it and it agreed with Mr. Pinhole and my standard chart for paper.  A minute.

Somewhat randomly, I decided to start with 2 minute development.

The first negative looked pretty good, but it struck me when I first looked at it that it was a bit underdeveloped. The blacks looked like they could get darker but, I could get a pretty good scan from it. 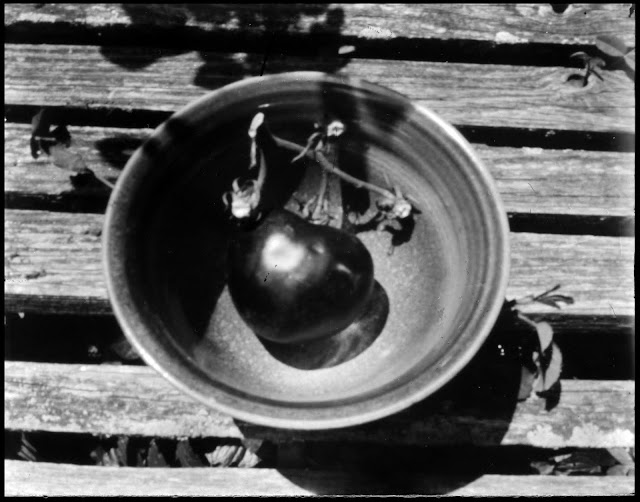 The next two negatives seemed a little lighter than I'd like, but I couldn't tell if it was a case of a difference in exposure or something to do with the development.

The fourth picture, I decided to go with what I thought would be a lower contrast subject. It was in the shade so the exposure was a lot longer, but I didn't measure it, I just guessed (based on the standard chart) that it was about three stops lower. After two minutes in the caffenol, I pulled it out of the developer and it looked really thin, and although I tell everyone to wait to judge a negative until you look at it in room light, I decided to see if more development time would bring out more detail, so I left it for another two minutes. The extra development time definitely made a difference. The blacks are blacker, but I thought I was starting to see staining on the unexposed portions.

I still got a pretty good scan out of it 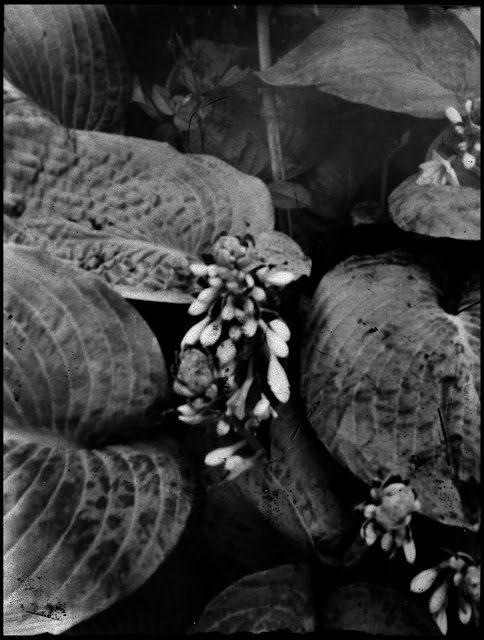 I realized that by taking a photograph and developing it and then going back out when the lighting conditions were changing, I wasn't going to get any real comparison.  So I loaded three of the workshop cameras and took three successive shots at the same exposure, and then developed them for 2, 3, and 4 minutes.

The two minute does look a little underdeveloped to me.  The three minute seemed pretty good, and the four minute seemed to have even better shadow detail, but the highlights seemed to getting a bit blocked up.

My best scans of the three. 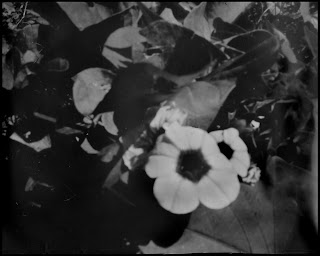 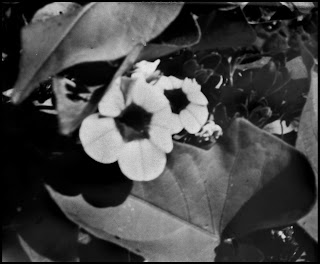 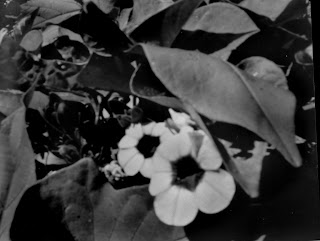 The first is a little lacking in shadow detail, but despite the differences in the negatives, the last two look pretty good to me. If I was going to do this regularly, I'd probably pick the middle one - three minutes.

So, can you develop paper in Caffenol? Yes. Does it affect the response of the paper? Not really too much. Does it stain the paper?  Yes, a little, and the longer developments showed a little more staining, but it still wasn't too bad, and might have controlled contrast a little.

I'm still not going to use it in the workshop in order to let the participants watch the image form, but it would work.
Posted by Anonymous at 7:59 PM