Under the heat dome

Well, the northern end of it anyway. I don't think the temperatures can compete with most of the country, but anytime you have a dew point in the upper 70's, it seems like a little oven-like.

It's always a little surprising that someone with such a great deal of fluff isn't uncomfortable in these conditions, but I guess it's the same insulating quality that leads him to sit around out here in the Wisconsin winter. 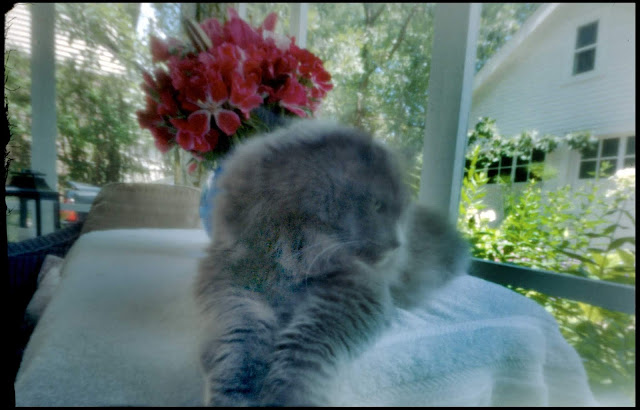 This whole series began when I noticed these really tiny flowers in the diverse ecosystem that is my lawn. I wondered what it would look like if I got as close as possible.

I'm surprised at how few close-ups I see on pinhole forums despite the ease of doing it. One of the facets of the digital photography revolution that's often overlooked is how easy close-ups have become.  With most digital cameras, you can almost set the lens on an object and still get it in focus. It hasn't been that long since everybody had to use film cameras, and I'm not sure how aware people are that it use to be fairly complicated to get a closeup at much less than two feet, even with a professional SLR.  Either you had to have a specifically micro lens, which even then only got down to 1:2, or a set of extension tubes or a bellows. Exposure had to compensated to account for the additional distance of the lens from the film. Full aperture built-in light meters still had to be stopped down in order to get an accurate reading.  With pinhole, no focusing is going on, so you can put the camera as close as you want.  There is the issue of diffraction, and you probably can get a better closeup with a smaller pinhole before Lord Raleigh's equations blur your photograph. but you don't otherwise have to make adjustments for getting as close as you can.

Anyway, the camera was about a half inch from these flowers, so its at a magnification of about 2:1. Kind of tricky to keep the camera from shading the subject, and I blew a couple frames when I opened the shutter and it cast a shadow on the scene. 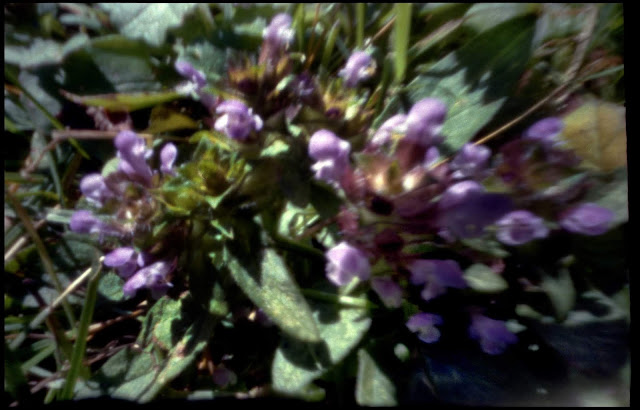 I then noticed that these were only the buds of these flowers. Even this close to the ground with a short exposure, the wind got in my way.  When you're this close up, it doesn't take much movement to blur things.  It's also a little tricky to accurately pre-visualize what you're doing, and I missed the blade of grass in the foreground. 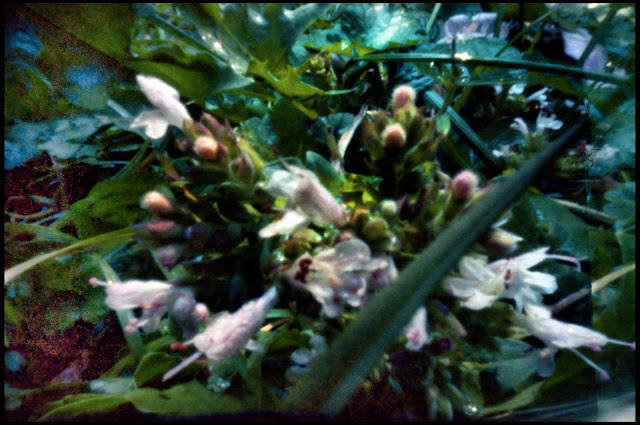 Another humble little flower that's very profuse on the lawn is the clover.  Even moving out to two or so inches away, there was a enough trembling from the wind to prevent a really sharp image.  But does that really matter? Occasionally on the f295 forum there would be a post about how to achieve maximum sharpness with a pinhole, and inevitably the discussion would end up with numerous exhortations to not get too hung up about sharpness – the pinhole aesthetic was about something else. 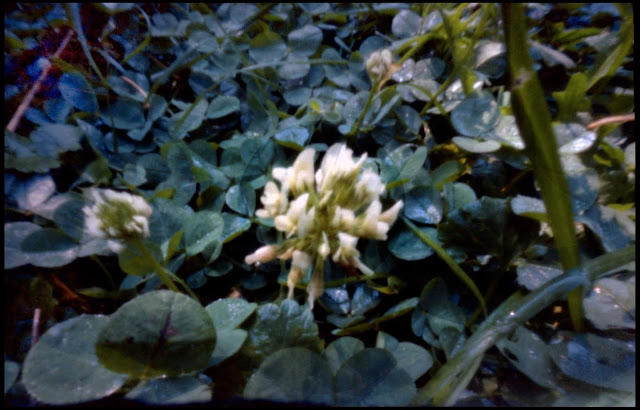 The pictorialist movement, begun by the Linked Ring in England, argued that emphasis on technical achievements, one of which was sharpness, was limiting photography's acceptance as a medium of art, and that more emphasis should be put on subject, composition and lighting.

A prime objective of composition is to direct the viewer to a center of interest. One of the tools you have with a lens to accomplish this is reduced depth of field by using a large aperture, but this isn't available to the pinholer, so you have to use composition, light and albedo to ensure that center of interest pops out from the background.  This weigela blossoms rather profusely fairly early sometime in May, but this one flower was still left in late July. The color contrast definitely contributes to it's prominence in the picture, but what really pops it out is that it's sitting out in the sunshine against the shaded foliage. 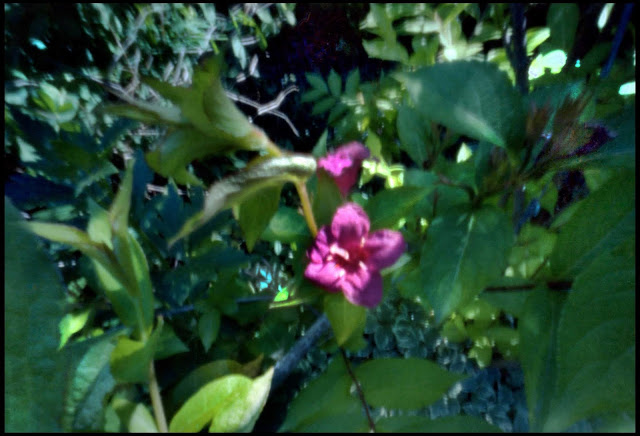 Sometimes albedo is sufficient to highlight the center of interest.  In this case I had a little trouble keeping these white monardas from blocking up, and I did a good bit of burning them in. I admit to spending quite a bit of time burning and dodging and otherwise manipulating contrast to get my pictures looking the way I want. Sometimes I encounter the argument that anything but a straight scan is somehow inauthentic. Ansel Adams is often idolized as the ultimate photographer and he unabashedly promoted how he manipulated negatives.  Moonrise over Hernandez, New Mexico is famous for how unrecognizable a straight print is from the final exhibited print. I don't see any difference in doing it with digital software.  (Although Edward Weston used to brag that most of his images were unmanipulated prints)

Lighting isn't the only tool for giving the illusion of depth. Scale can be another tool.  The two blossoms flanking this double decker in the center provide a cue to the depth in this picture.  I also like the way the cluster creates this triangular shape in the center of the composition and the way it's framed by the areas of somewhat lighter green foliage on either side of it contrasted against the darker corners. 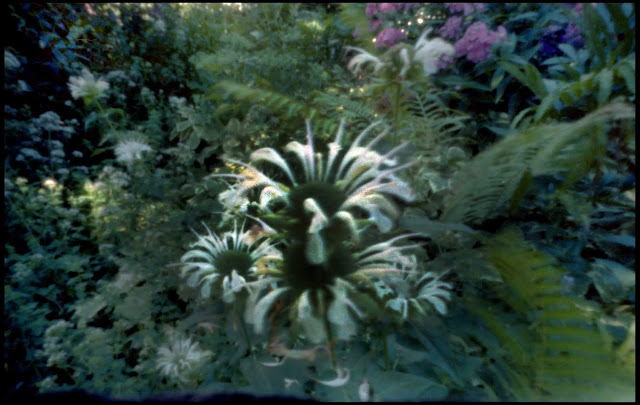 My posts about flowers get by far fewer hits than others.  I suppose that's because it's perceived as being trite. I guess I've often told budding photographers that they should just express themselves and make photographs they like and the audience will decide what is important art or not. I think Imogen Cunningham and Robert Mapplethorpe pulled off getting artistic recognition using flowers as subject matter, and I'll just let you decide about these. 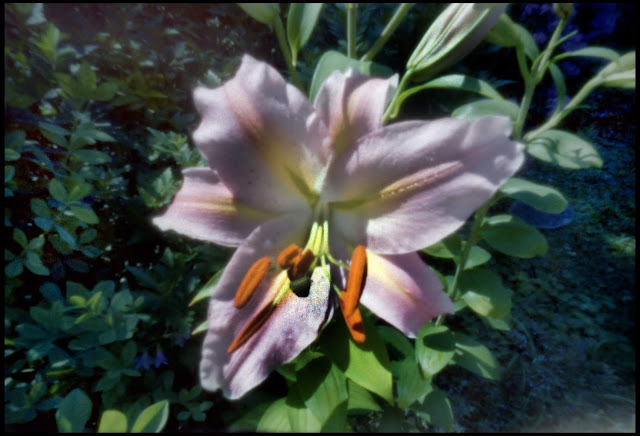 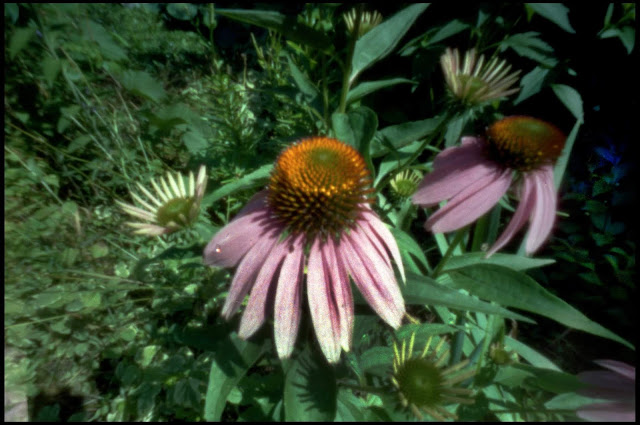