The southwest of Wisconsin, that is.

Last year for our 40th wedding anniversary, Sarah and I went to Spring Green to go to the American Players Theatre and tour Taliesin. We thought the area was worth another visit.  American Players Theatre has a special goal to make the works of Shakespeare accessible, so this year, we picked The Comedy of Errors. You can't beat Shakespeare for zaniness and I don't think I'm emotionally ready for this year's other Shakespeare selection, King Lear. 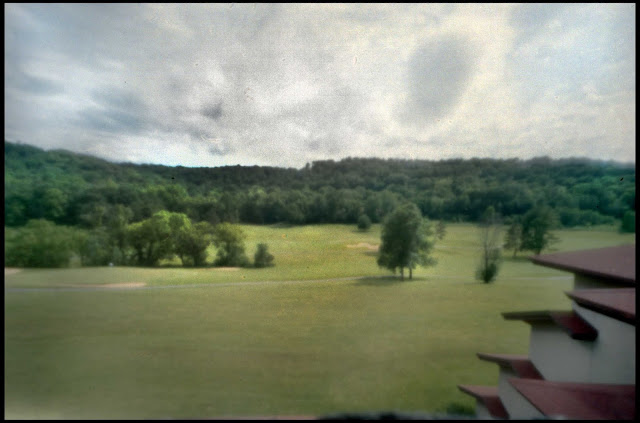 I don't think Frank Lloyd Wright had anything to do with its design, but they're obviously trying to make it look like it.  On the parking lot side, our room was on ground level, but on the other side, it's four floors over the golf course. 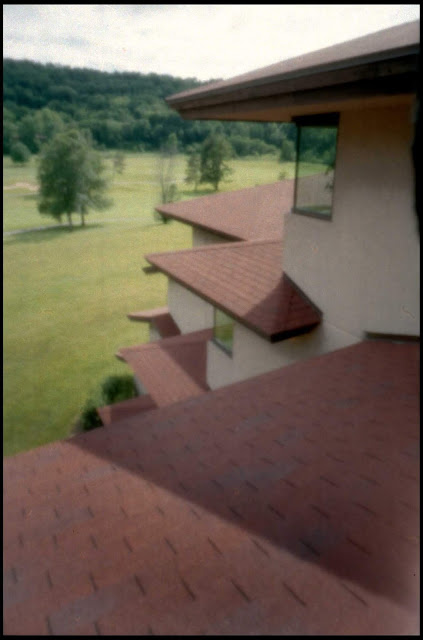 The Theatre is on the top of a hill in the middle of the woods. Here everyone traipses up the hill as the sun sets. 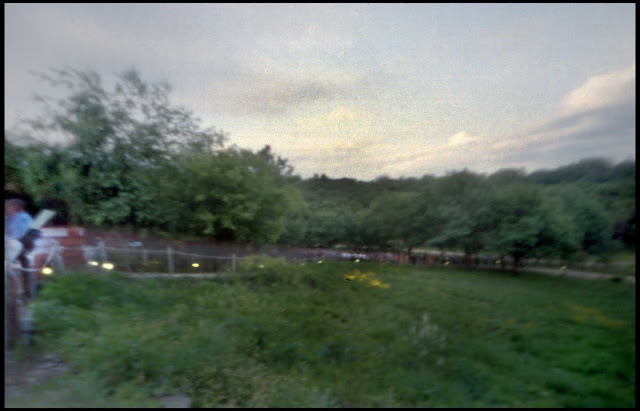 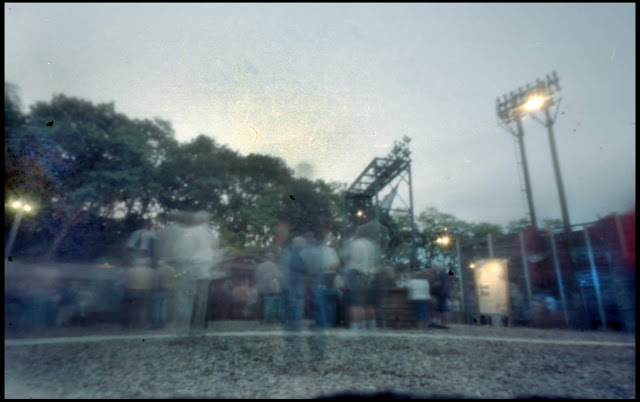 and the theatre is down the other side. 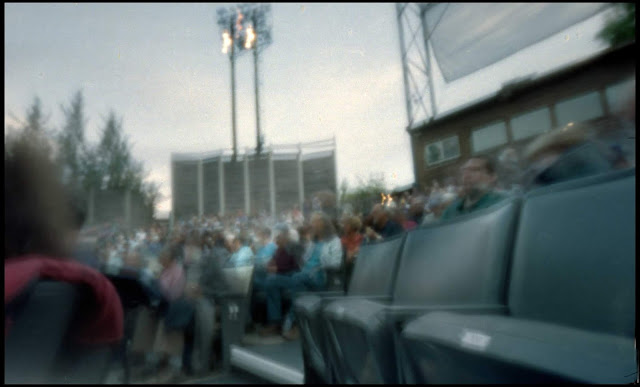 It's really out in the middle of nowhere, but even on a Thursday night before school was over the place was sold out. I tried to get a picture of the set, but the lady in front of me took her seat not long after I opened the shutter. The stage is completely framed in forest. I only saw one this night, but the bats put on a bit of a show over the second act last year. 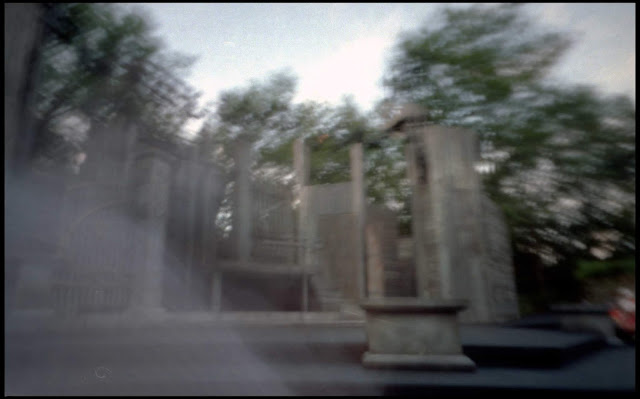 There's kind of a picnic atmosphere before the play, so we were one of the last to arrive, but the way the parking lot is configured, that meant we were about the last out. That object in the sky has to be the reflection in the windshield of the car lights behind me. While we waited a monster lighting storm that had been threatening all day to cancel the play, put on a show in the other direction, just to the east. 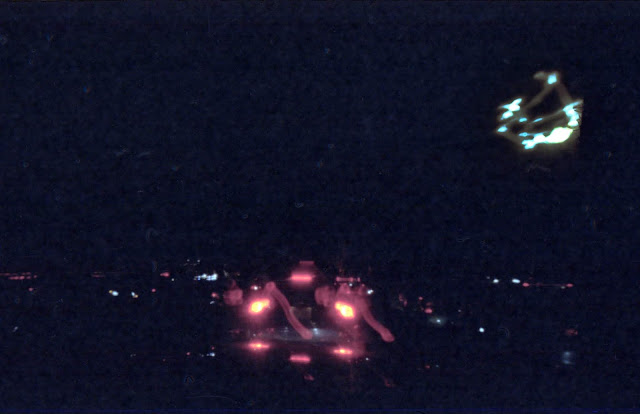 Just down the road from the theatre and the resort, is Tower Hill State Park.  As you might have guessed from the name, it's a hill that rises up to a bluff overlooking the Wisconsin River Valley. 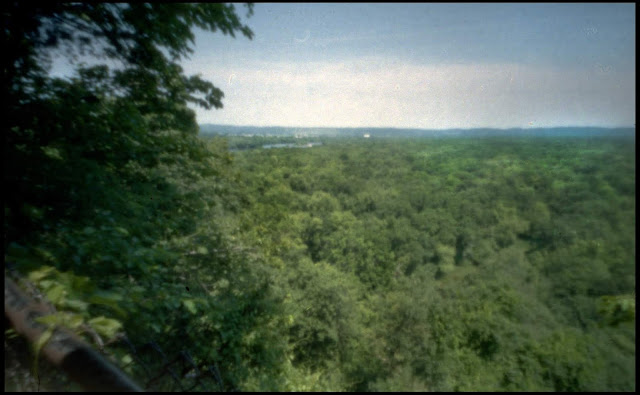 The park is also a historical site. This area was settled by Europeans originally to mine lead.  A miner is one of the figures on the Wisconsin State flag.  In 1830 a Green Bay entrepreneur noticed the bluff when travelling down the Wisconsin River and got the idea this would be a great place to start the Wisconsin arms industry by making lead shot. At the top of the hill is the smelting house and shot tower. 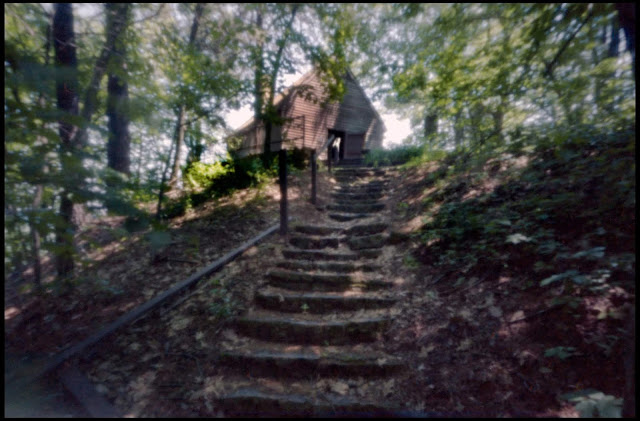 Shot was made by dripping molten lead down a shaft which surface tension would draw into a perfect sphere before it landed 60 feet below in a tub of water which would instantly re-solidify it. The shot tower, which is actually carved into the hillside along with a couple tunnels, is covered with fencing so no one falls down.  I left the camera laying on it for about 5 minutes, but it was darker than I thought. 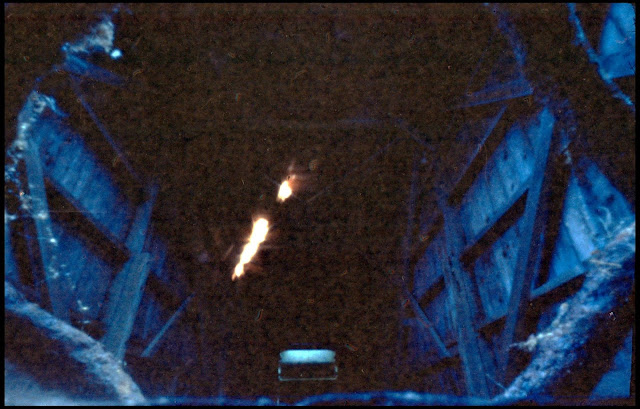 Roughly on the way back to Oshkosh is something you might have expected seeing when reading the title of this post, the Natural Bridge State Park.  Wisconsin rocks are made up of several eras worth of sandstones which get carved up by glaciers and other methods of erosion.  Lots of places would probably look like Monument Valley if, as one of my geologist friends used to say, the rocks weren't covered up by all this damn dirt and vegetation. 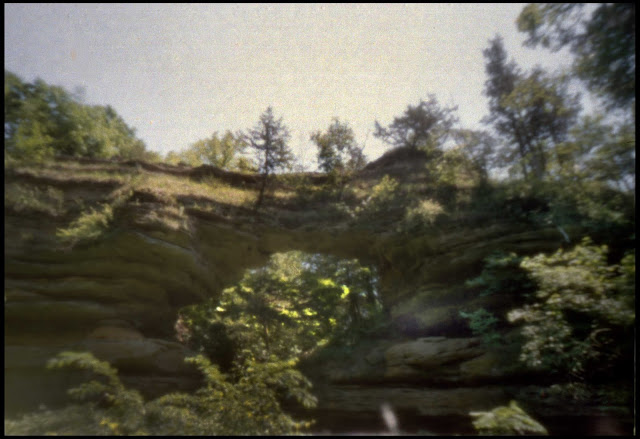 The park is really unimproved except for a weedy parking lot and single file foot paths. You can't see the bridge until you're nearly on top of it, and there's few other viewpoints. I stuck the tripod as far over the little fence as I could reach to get a little different angle. 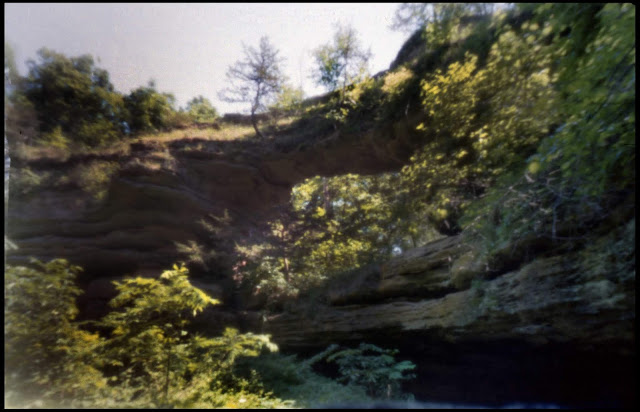 The overhanging ledge near the bottom is the site of the earliest human habitation in Wisconsin. 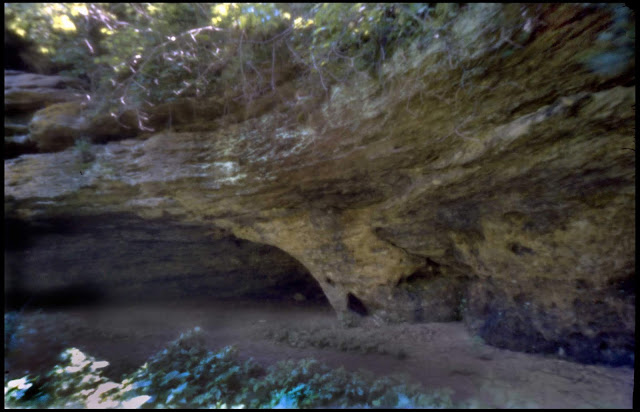 As we continued down the trail looking for a another view of the bridge, we had to step over this huge hole where it looks like something is living now. 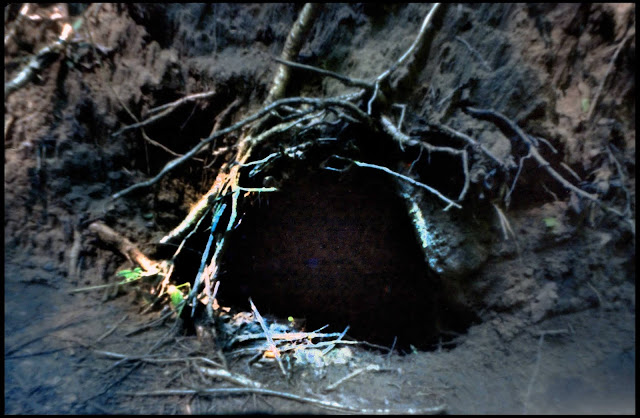 We followed the Overlook Trail to it's end in the hope that it meant overlooking the Bridge, but it's just another view of a green Wisconsin Valley. 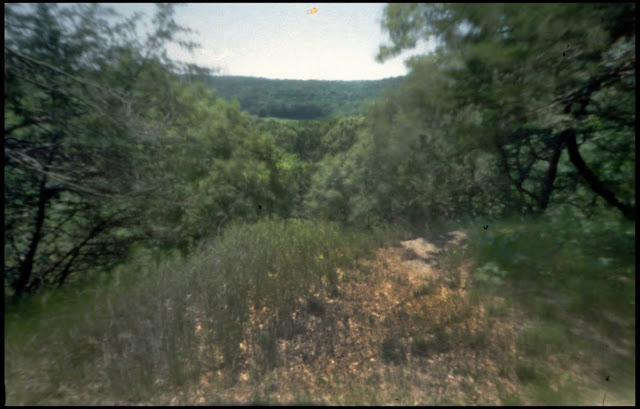