A dozen of my stereo photographs are going to be included in the Oshkosh Public Museum’s Then and Now exhibit. I was reasonably happy with the first two rolls and the curator was kind of excited to have some sort of hands-on experience for the visitors. We’re going to put the Then image on one side of a stereo card, and the Now on the other.

The result of my hyperspace cha-cha experiments were intriguing enough to try again. This time I used Goldberry, with her 80mm “normal” angle of view.

It helps to flatter your host institution by including them in the show. They’re using a very similar image for the exhibit poster (not by me). Instead of my little string, I just used a crack in the sidewalk to keep the camera movement parallel.

As usual, set up for crossed eyes (click here for how to do it) and for red/blue anaglyph. 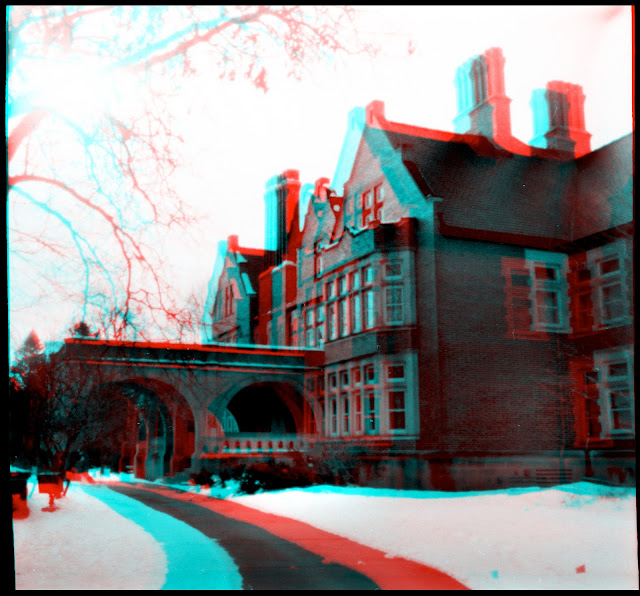 Algoma Methodist is a very recognizable structure just down the block from the Museum. The angle of view was a little too wide from across the street, and from the other side, was too narrow to fit the building in the frame. I was limited in where I could put the camera because of the necessity to have a big enough clear spot to move the camera between exposures while keeping it perfectly level. I chose to go with the bell tower for the tight crop. 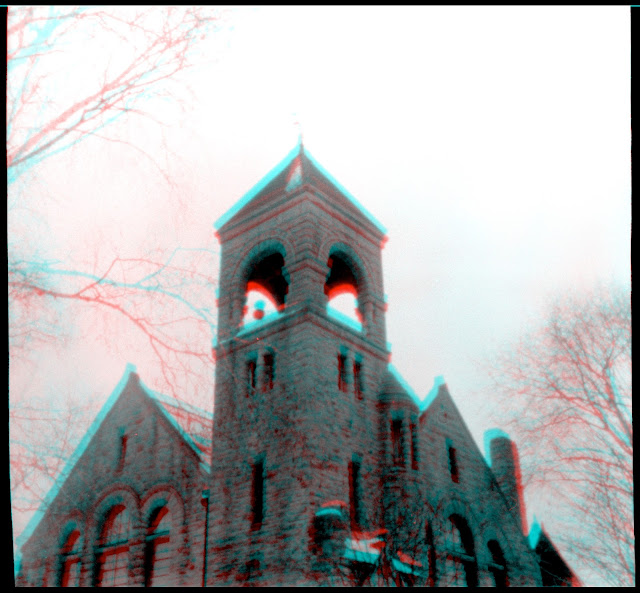 Oshkosh High School burned in 1901 and was replaced by this Modern/Greek Revival mashup, now housing City Hall and missing its original monumental stairway. 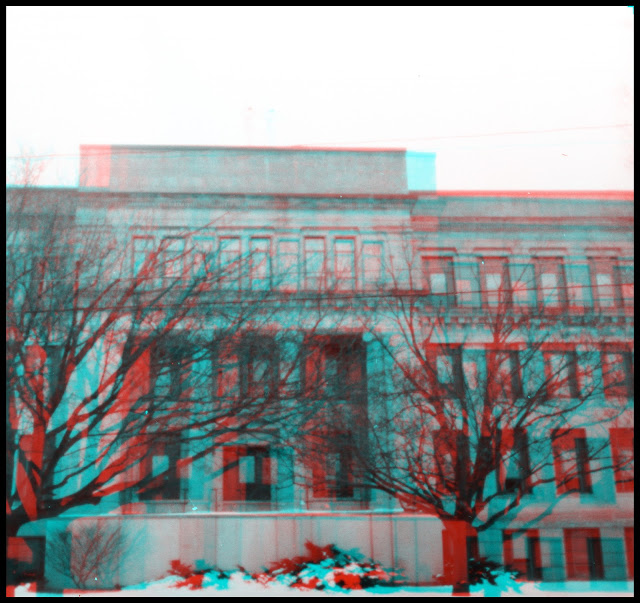 I wrote down the address “Main and High” and remembered the archive image as a line of buildings. When I got there, I assumed this block was it. I should have known since the street names change on the other side of Main, this view would have been “Main and Waugoo.” 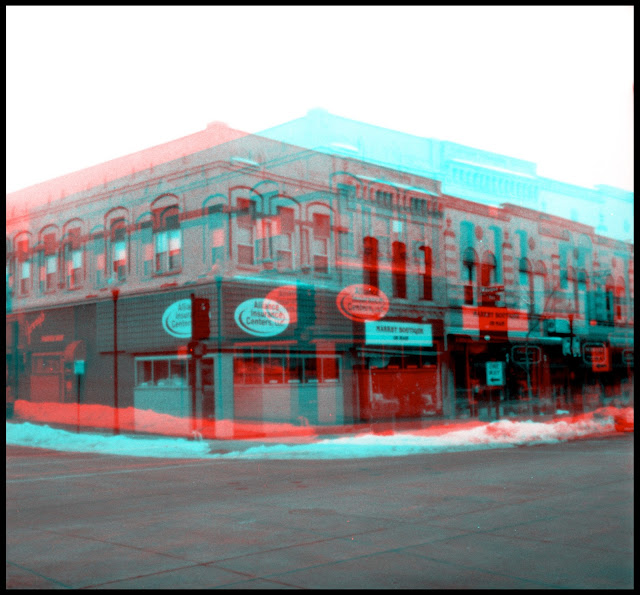 Another mistaken address, the corner of Pearl and Osceola. What is now Pearl was Warren Road until they curved Pearl a block south to go around the University a few years ago. I remembered this about half way through the second exposure. 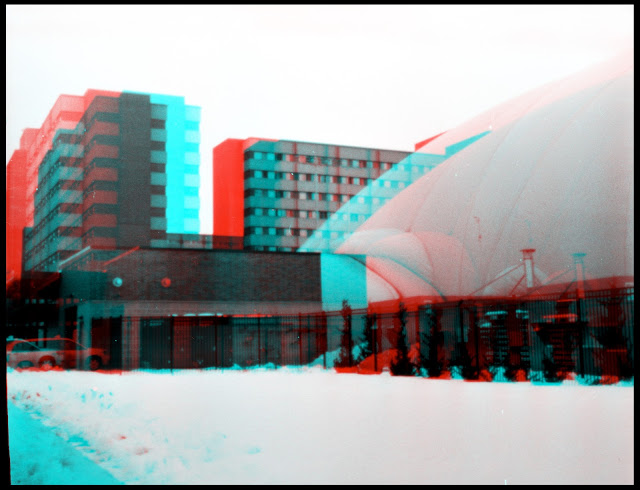 Then I decided to give the 45mm stereo camera another try as well.

I went back to Algoma Methodist to see if I could get a more dramatic image. I admit that I concentrated on the side entrance just for the extreme 3D. This was one of several places that a giant pile of snow was exactly where I needed to put the camera and I nearly fell over and bent one of the tripod legs setting up on top of it. 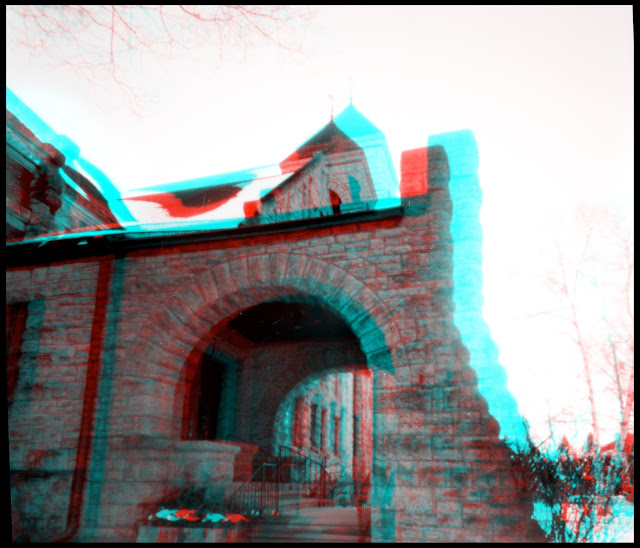 It was the first sunny day in weeks. When I rode around the building I noticed the shadows on the trees and the little turret in the corner for a foreground 3D object with a nice clean driveway to place the camera on. 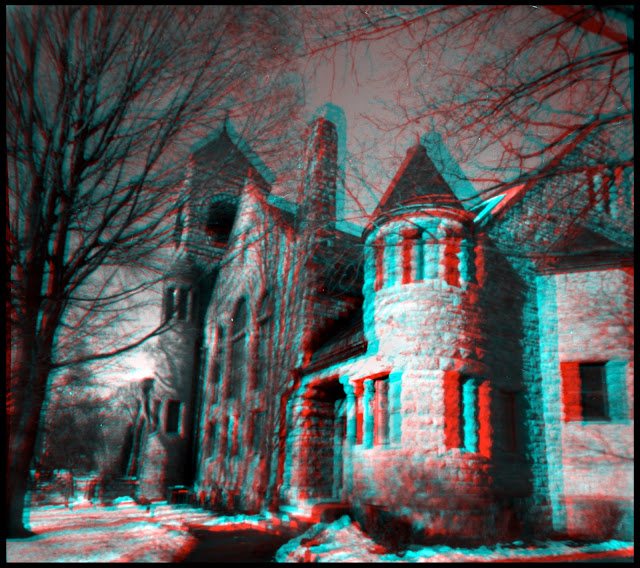 I wasn’t thrilled with the view of Dempsey Hall from the first roll, and again taking advantage of the sun and shadows, thought this view would pop a little more in 3D. 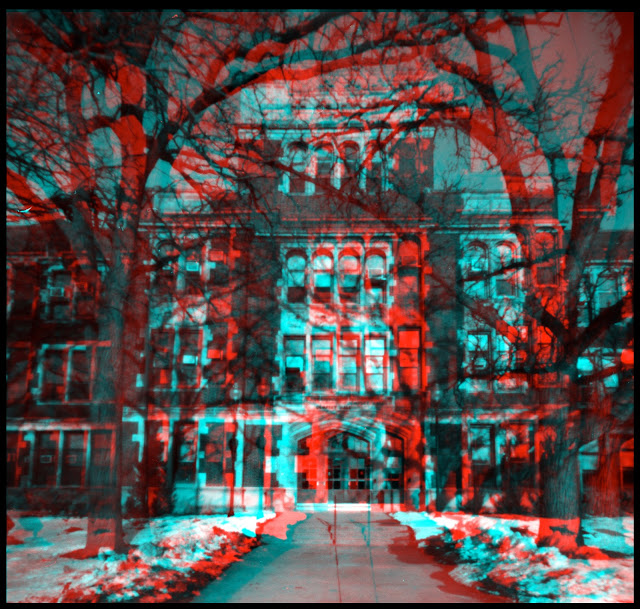 This is where the corner of Pearl and Osceola was when the archival image was done. 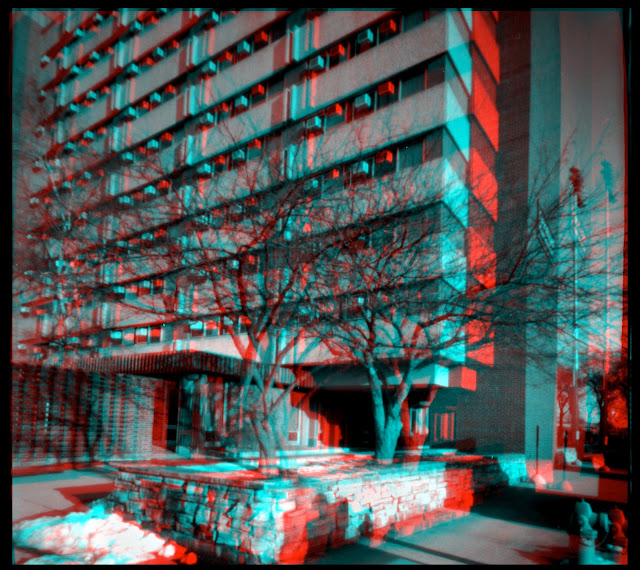 And here the correct view from Main and High, now Opera Square. Again from atop a giant pile of snow except this time I had to get up on it right over the curb next to the busy left turn lane on one-way High Street. I’m surprised nobody called the police. 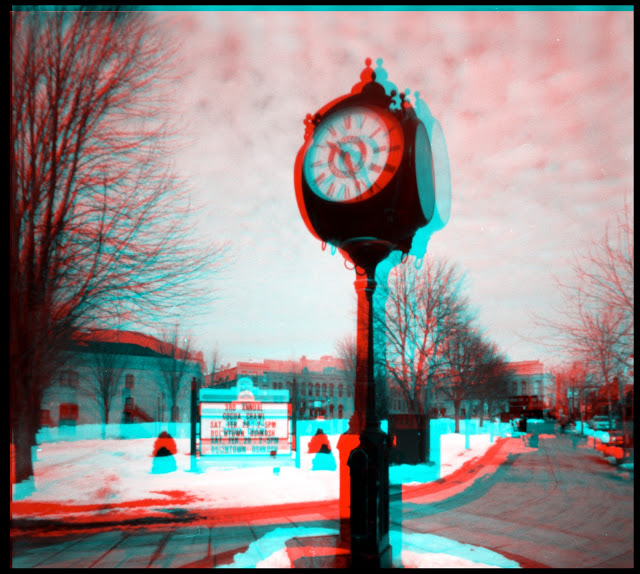 It turned out that I chose eight of the twelve which were done with hyper stereo cha-cha and four with the stereo camera. That may have had more to do with taking pictures with the stereo camera that didn’t have matches in the museum archive than any preference for one method over the other.
Posted by Nick Dvoracek at 4:00 PM