Although it’s very unusual for anyone to be within six feet of me when I’m taking a pinhole photograph, with the term “social distancing” being repeated in every other sentence lately, I kept thinking about the 200mm front for the Variable Cuboid.

Also, once again, there was recently one of those discussions on Facebook where a rookie was asking about “the ideal size of the pinhole at 45 and 810?” (I think they probably meant 4x5 and 8x10 inch formats.) Among the explanations in response someone stated that “the bigger your focal length the less sharp your image,” and then later “the more you respect the rules the better your images are going to be.”  While technically true, that attitude strikes me as discouraging even trying longer distances to the pinhole.

So paying strict heed to keep my distance from anyone (not hard to do in a town like Oshkosh), I went out to find scenes at the appropriate distance for my long camera.

Until some ten story dorms at the University were built in the 1960’s, the tallest building in Oshkosh was the 1927 Raulf Hotel, now the Mainview Apartments. You can see it rising over the view from just about anywhere on the north side of downtown. My eye is always drawn to the zig-zag juxtapositions with the rooflines of the smaller buildings. If you get near enough to frame it with a wide-angle camera, the nearer buildings obscure the taller structure. The long camera allows me to get the angle I need. 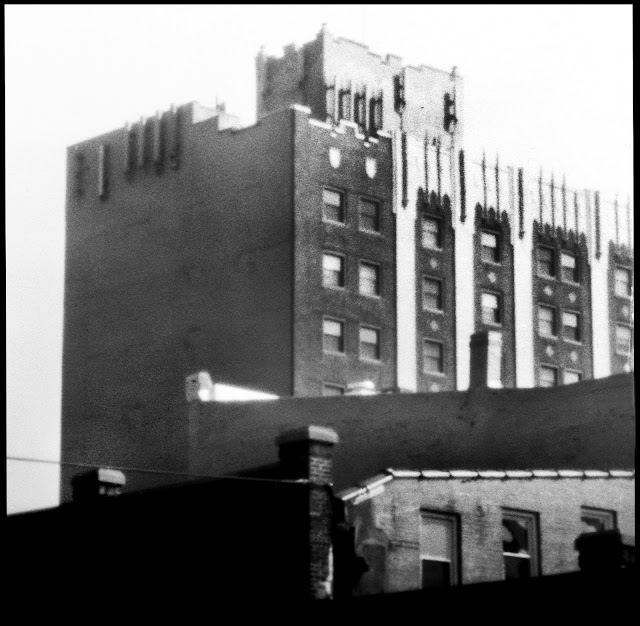 For only one year, the 1926 First National Bank Building was the tallest building in town. 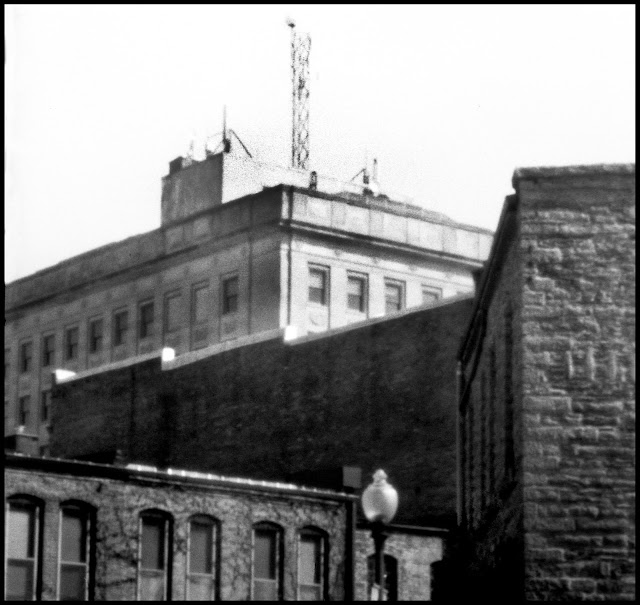 Downtown Oshkosh, like the centers of most industrial cities, has gone through a lot of changes and there are occasionally abandoned buildings right in the middle of the commercial district. On the street side of this one, the ground floor has a mid-century modern retail facade with the historical windows on the upper floor covered with boards. This second story opening in the warehouse in the back is open to the elements. 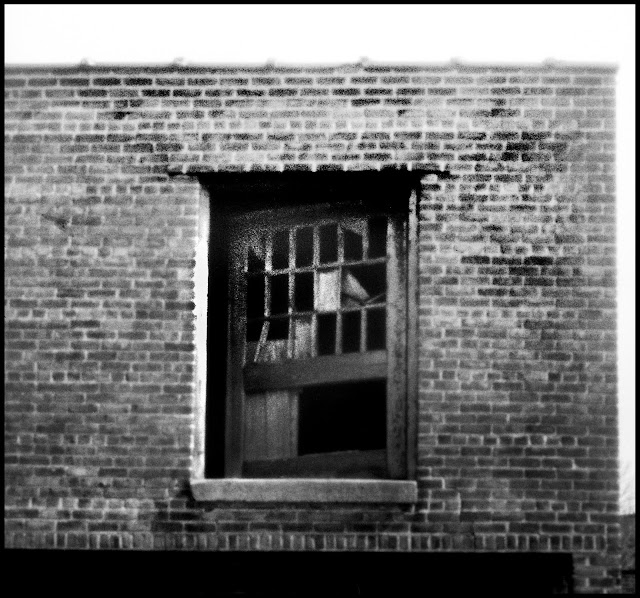 During boating season, the massive railroad draw bridge over the Fox is kept raised except when a train is crossing but from October until May it stays lowered. 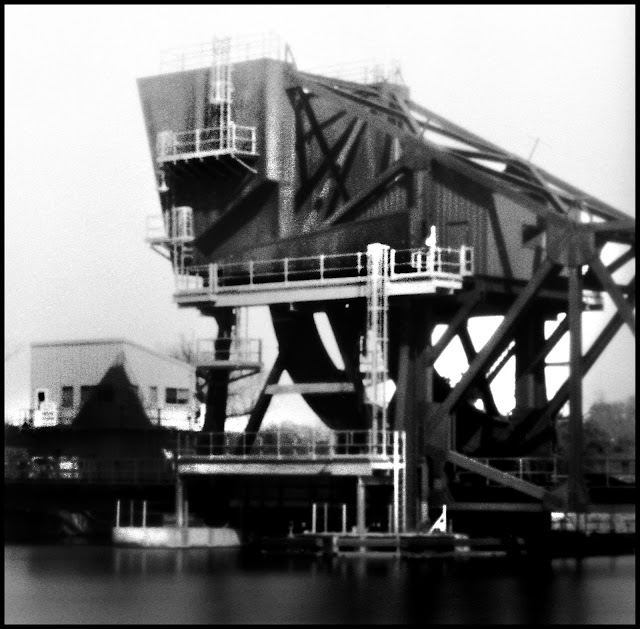 Another composition of roofs and random additions at South Park Middle School. 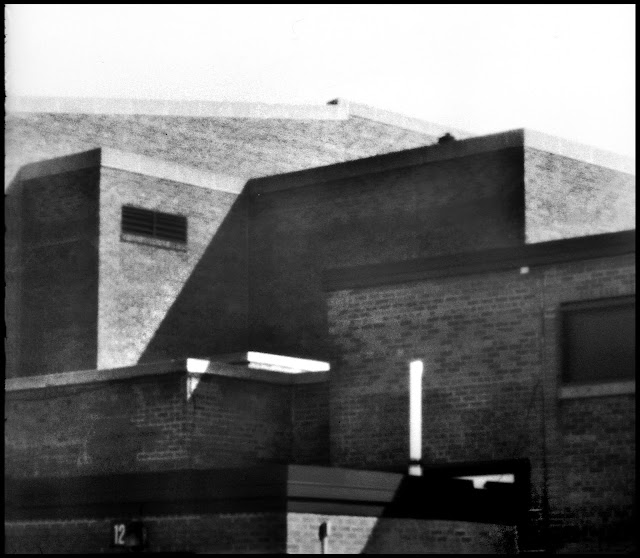 The lighthouse at Asylum Point is on a small island. The wooden footbridge leading to it was destroyed by an ice shove two years ago, so the only way you can get near it is with a long camera. 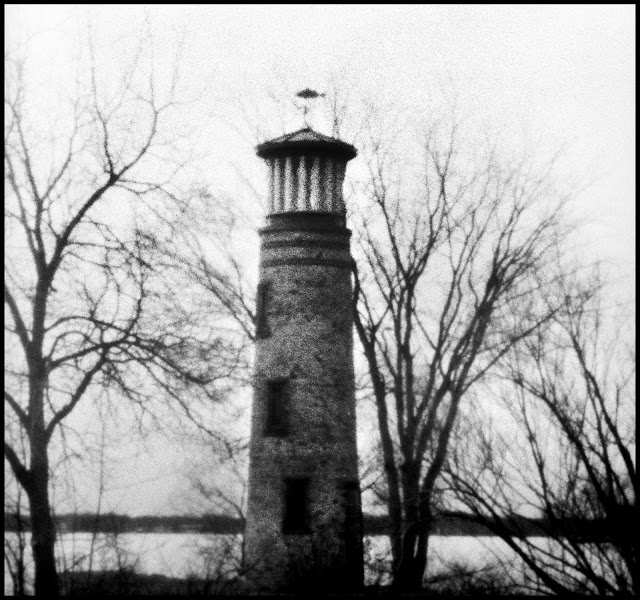 Some things you really don’t want to get near. This place gives some perspective to having to deal with the current pandemic lockdown. 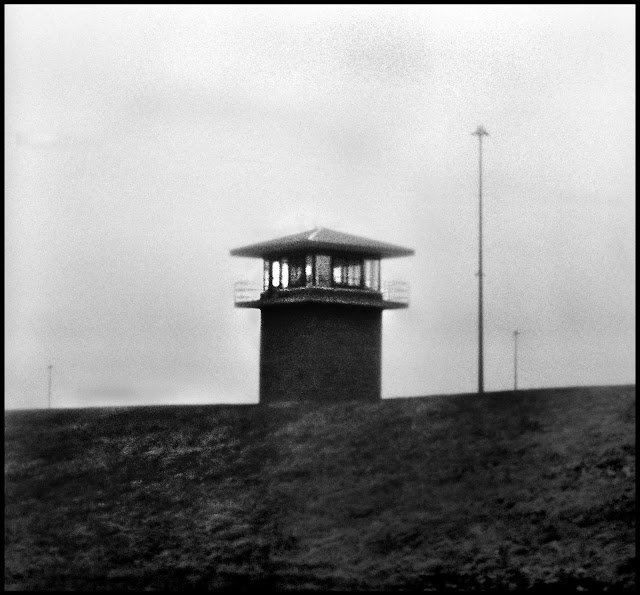 Just around the corner from my house, the angular entry of the Glad Tidings Tabernacle contrasts with the gothic window in the belfry. 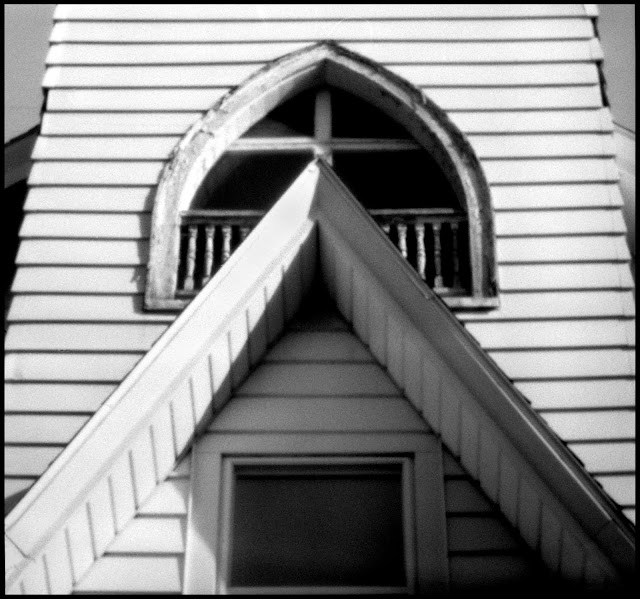 A narrow angle camera encourages tight cropping. A shadow zig-zagging down the stairs. 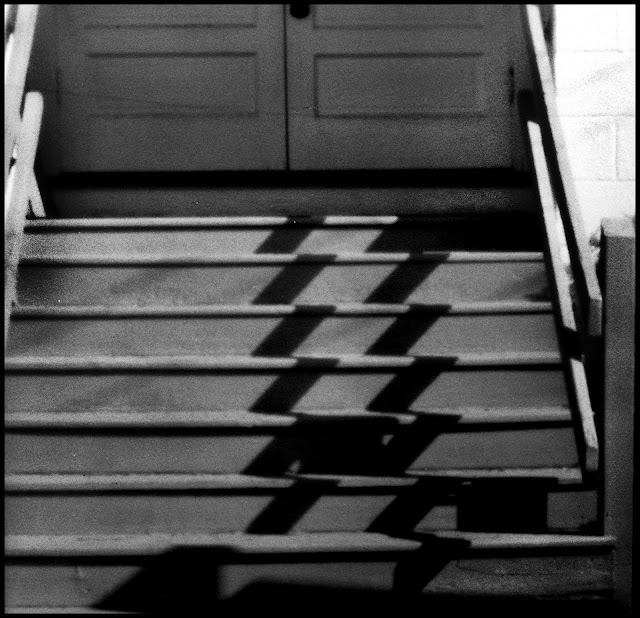 It’s a little surprising that they let this giant oak remain just feet from the corner of Merrill Middle School. 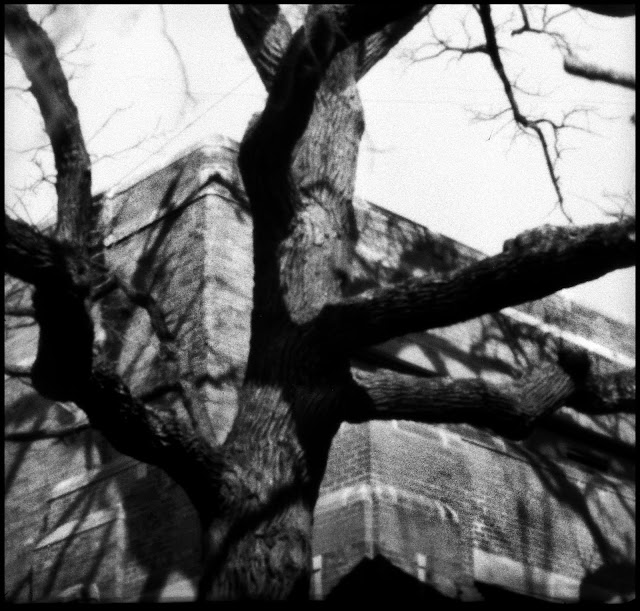 At the nearby soccer field, some of that oak’s contemporaries cast shadows on one of the little utility buildings. 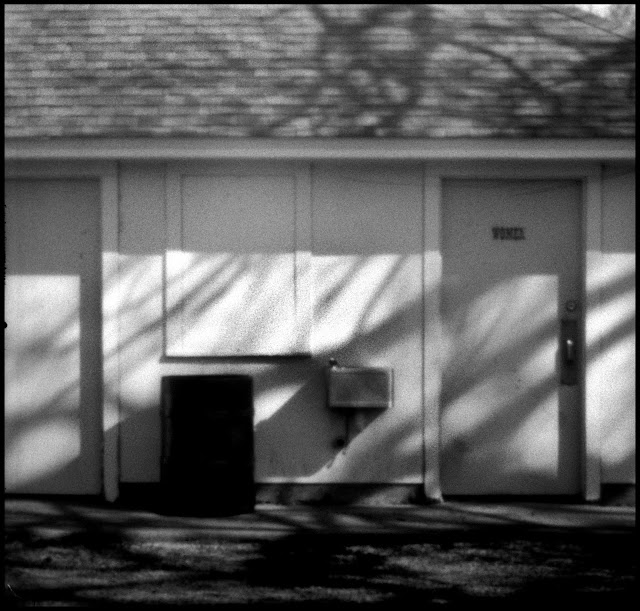 The 200mm front for the 6x6cm format Variable Cuboid has a single on-axis .5mm pinhole (f400). The film is the surprisingly grainy Fomapan 100, stand developed in Rodinal 1:100.
Posted by Nick Dvoracek at 1:42 PM