The defining characteristic of the city of Oshkosh is its location on the short stretch of the Fox River between Lake Butte des Mortes and Lake Winnebago.

The Fox River was part of the waterway that had been used for time immemorial to travel from the Great Lakes to the Mississippi River.  In 1831, as more settlers from the east began moving overland, James Knagg began operating a ferry just downriver from where Lake Butte des Mortes narrows into the Fox River. More recent settlers congregated further down stream near where the Fox flows into Lake Winnebago. In 1847, a float bridge was built at the site of the current Main Street Bridge.

In 1955, U.S. Highway 41 was rerouted to bypass the city to the west. This required the construction of a causeway over the eastern end of Lake Butte des Mortes. In 2013, the highway was expanded to six lanes and a recreational trail was included along side it. I cross the river on this trail several times a week on my bicycle.

When I made this image, the wind was blowing across the lake at a sustained 25 miles per hour and the temperature was hovering around freezing which created these crystalline bases on the vegetation on the shore. 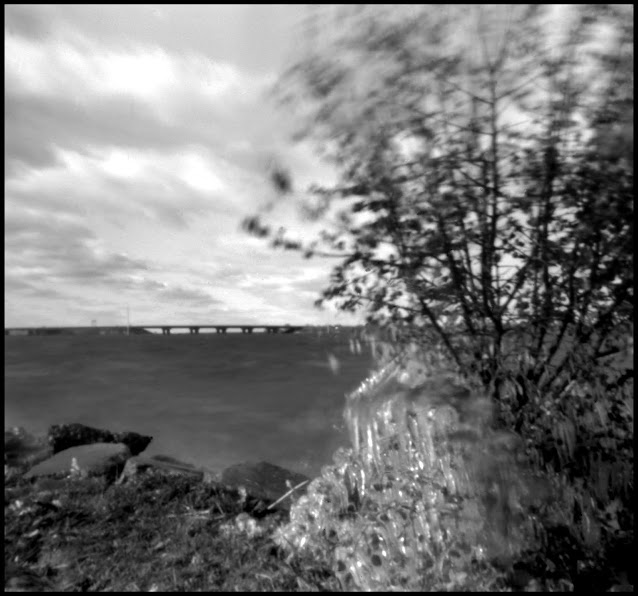 The trail begins where Oshkosh Avenue goes over the highway, with a wall decorated with reliefs depicting recreational activities of the area. 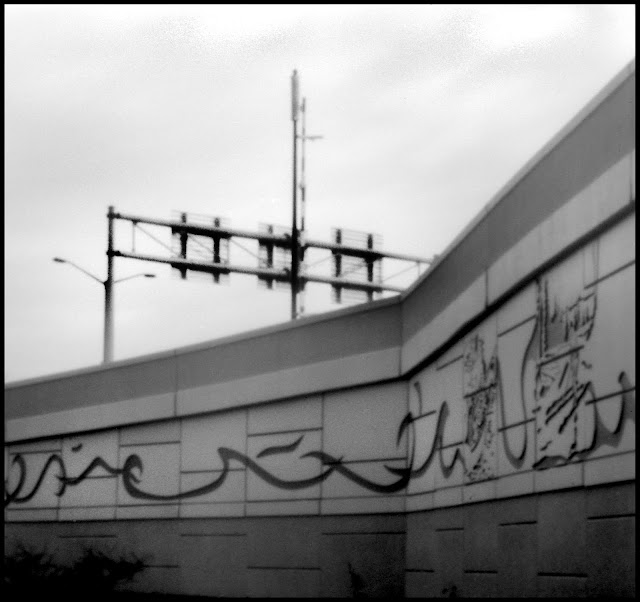 The trail itself is designated as The Tribal Heritage Crossing. There are 14 overlooks with displays featuring the stories of the Native American Tribes of Wisconsin. The one dedicated to the Menomonee Nation includes an illustration based on a daguerrotype of Chief Oshkosh, after whom the city is named. 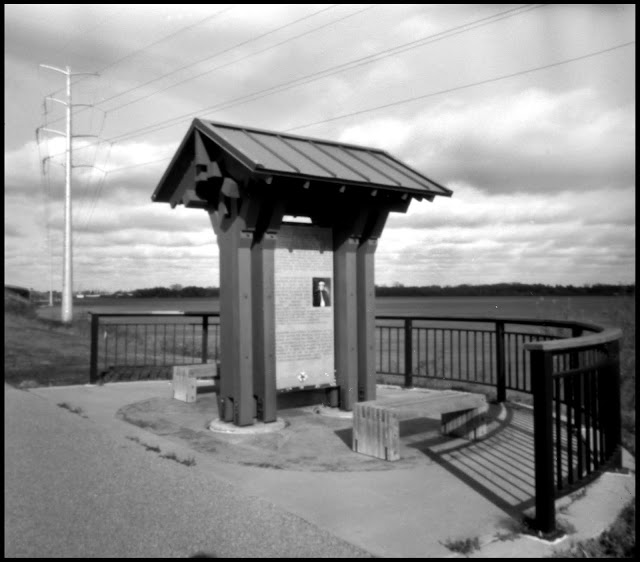 One of the displays is a sculpture representing “an offering fire that provides light and direction for all who visit.” 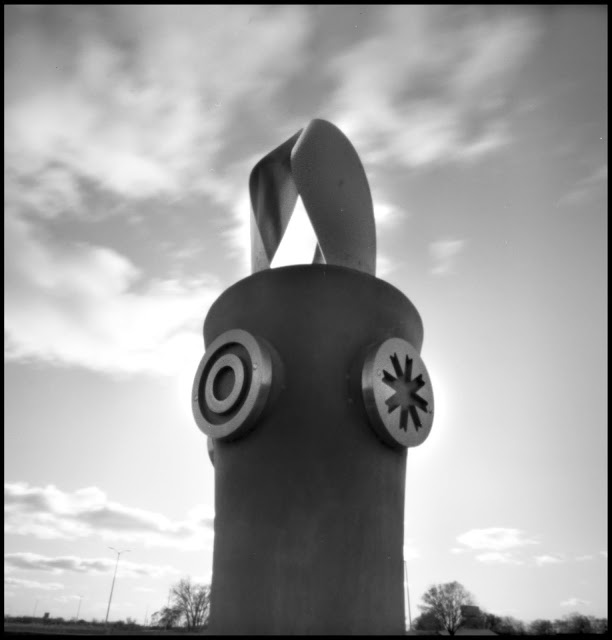 Most of the overlooks only have the informational kiosks, but the one for the Lac du Flambeau Band of Lake Superior Chippewa includes a miniature version of the offering fire. 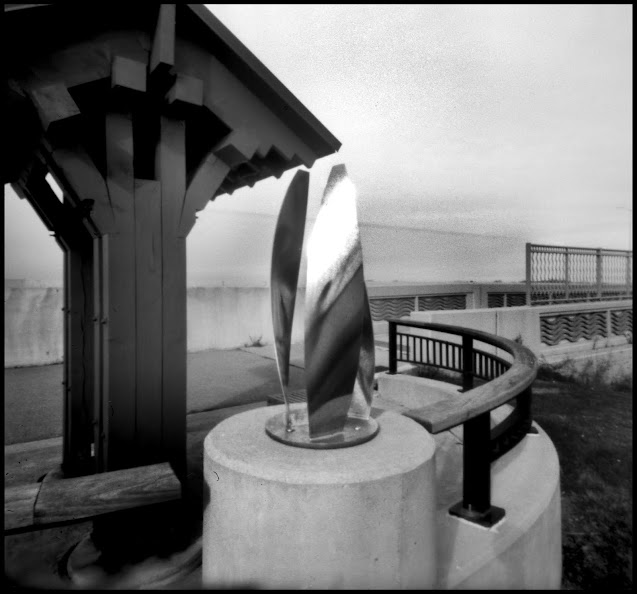 The three bridges along the causeway each have a theme depicted by the decorative railings. The northernmost repeats the fire theme. 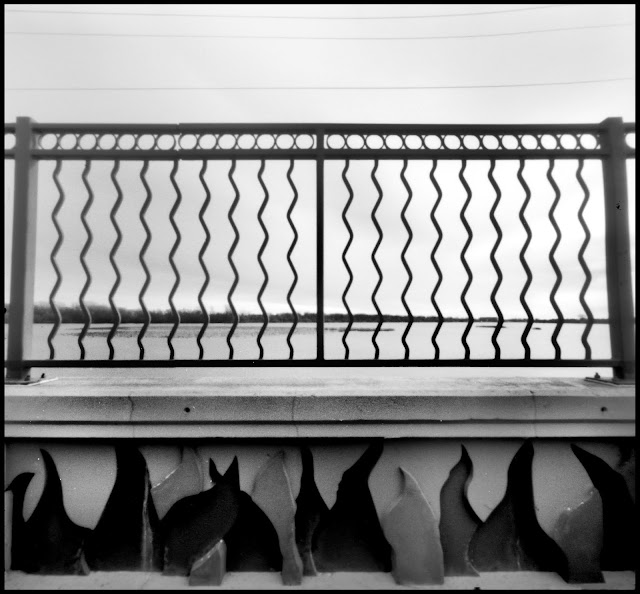 The center one is the Water Bridge that someone has attached this handmade cross to. A worker was killed when a crane collapsed constructing the bridge so it’s possibly a memorial. 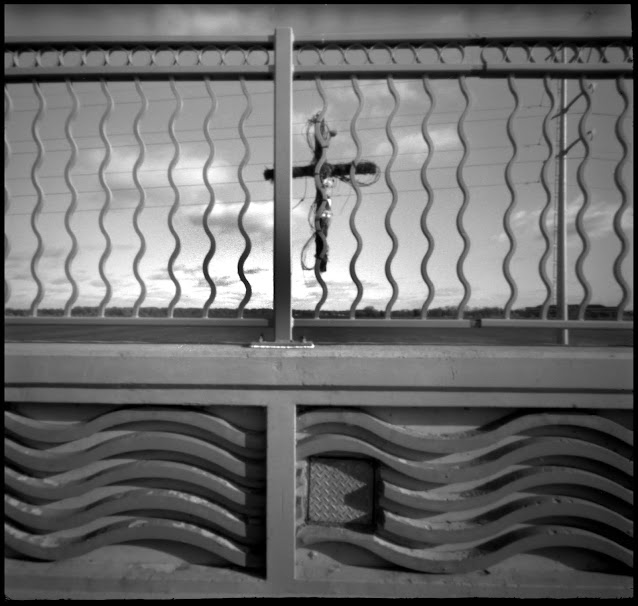 There are two “fishing trails” which lead down to the water on either side of the central bridge. The one on the south side includes a path underneath the bridge. The first two bridge supports are decorated with motifs representing the reeds and wild rice which historically filled this part of the lake. 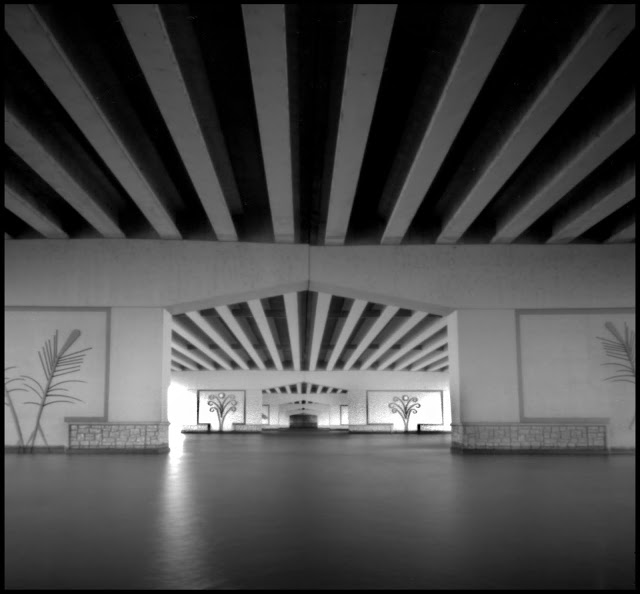 The rest of the supports are decorated with the species of fish common in the area. 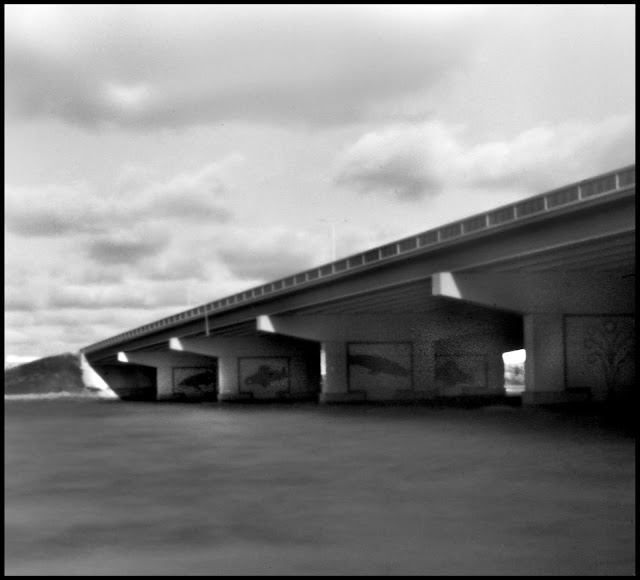 In addition to fishing from the shore on these trails, it’s not uncommon to see boats anchored next to the bridge. 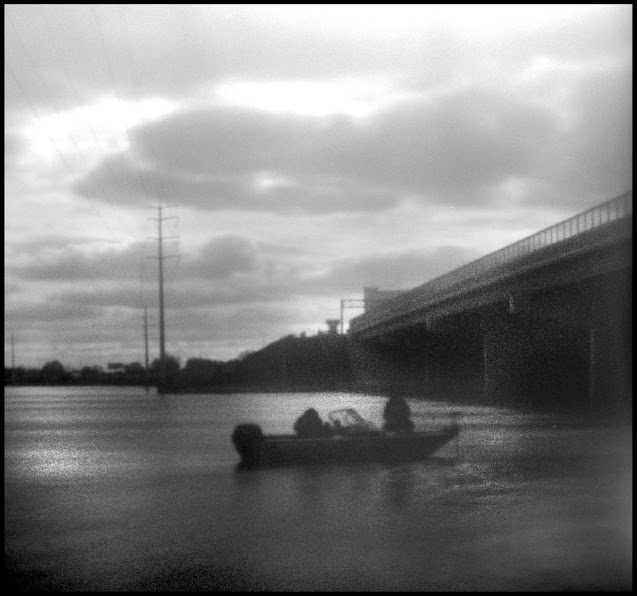 The causeway not only carries the most people across the Fox, it’s also moves most of the electricity over the river. 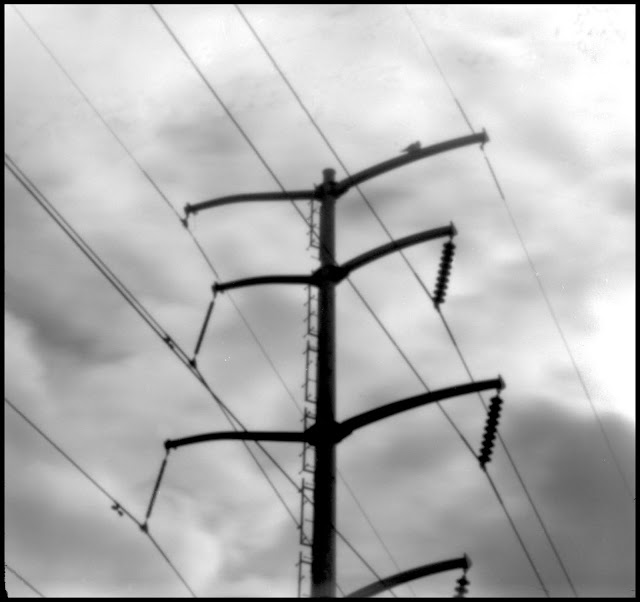 It takes a pretty massive chunk of concrete to anchor those towers to the ground. 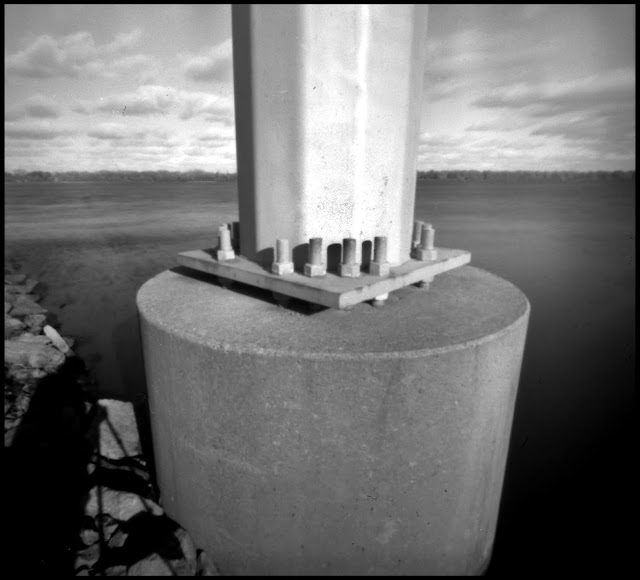 Despite the huge amount of power overhead, something is being powered by this little solar array. 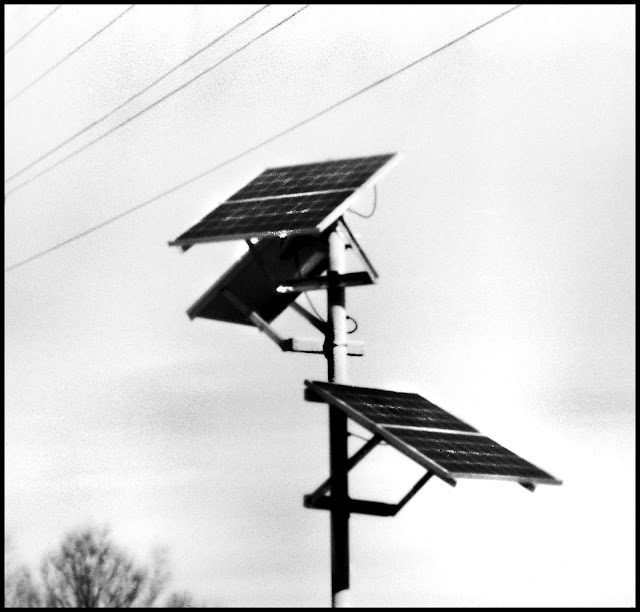 This pleasant little recreational trail is just feet from heavy traffic moving at 75 miles per hour. 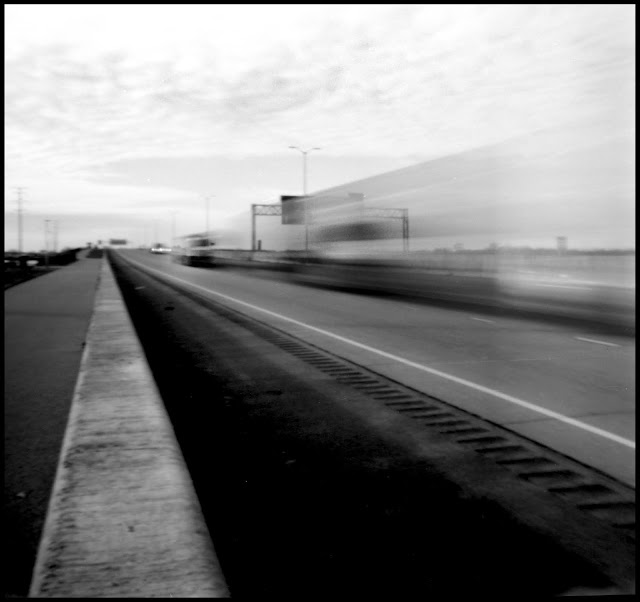 They built a causeway instead of a bridge because Lake Butte des Mortes is mostly a very shallow marsh.  The maximum depth is only 18 feet and most of it is less than 6 feet. 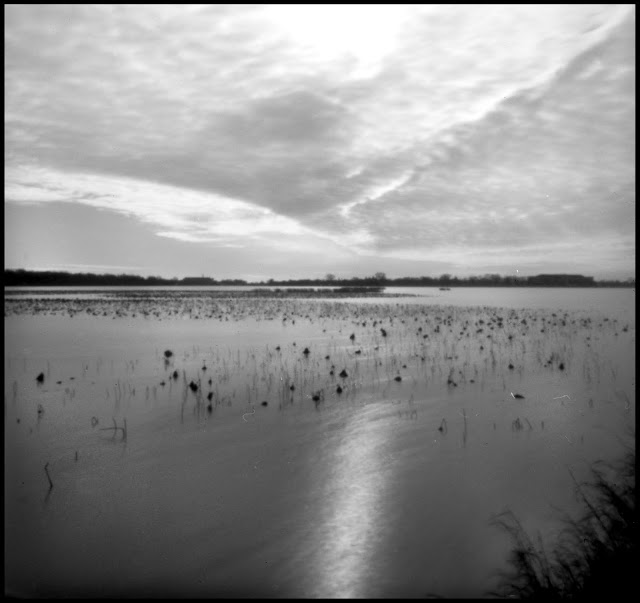 Near the northern end of the causeway is this little island.  I’ve often wondered whether it was a natural feature or a remnant of the logging industry that used the lake to store rafts of logs brought from upstream on the Fox and Wolf Rivers, or possibly from the construction of the causeway. 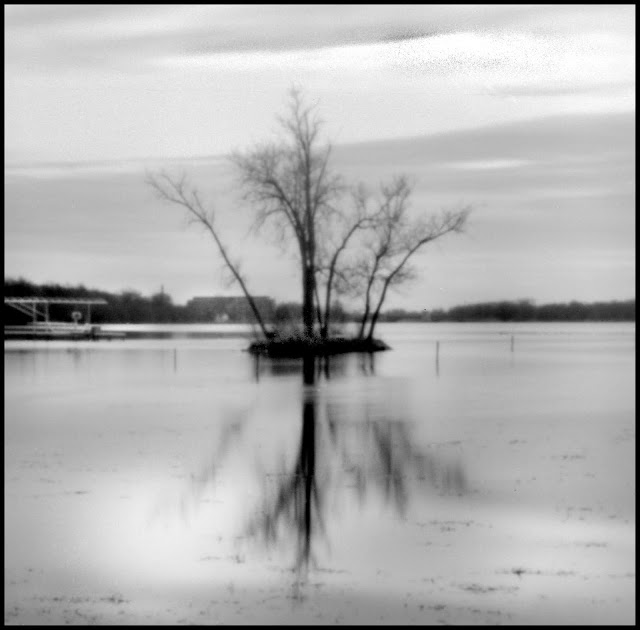 Posted by Nick Dvoracek at 5:16 PM