Before f295: The Pinhole of Nature. 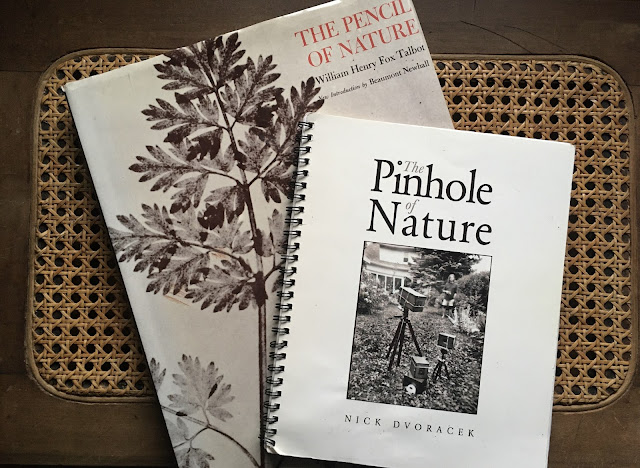 A couple things happened recently that inspired this post.

First of all was that someone just created a Facebook Group “Photography Books and Theory.”  The purpose of the group is to share books of photographs and about photography which participants have found useful and inspiring.

I immediately thought of the first photographic book, The Pencil of Nature by William Henry Fox Talbot.

Yes, I know about Anna Atkins’ Photographs of British Algae: Cyanotype Impressions  but that was illustrated by photograms, not camera photographs and Excursions Daguerriennes whose illustrations were engravings of Daguerreotypes.

The illustrations in The Pencil of Nature were tipped in salted paper prints from original calotype negatives by Talbot, who invented the process. Most of them are camera images but two are photograms. Talbot’s process, based on paper negatives, was often negatively compared to Daguerre’s process because it wasn’t as sharp. Hey, pinholers, does that sound familiar? I’m sure that a lot of people, if shown Talbot’s photographs without knowing where they came from, might guess they were done with a pinhole.

Although I’m nowhere near the scholar Talbot was, I kind of relate to him because he was just trying to figure out how to do something. He was frustrated at not being able to draw. He had made some rather clumsy attempts to use a camera lucida and pondered how cool it would be if you could just record the beautiful image the camera projected. He was a member of the Royal Society, but his areas of expertise were mathematics and philology (the study of languages). He invented photography basically by just trying things out. Occasionally that included some observations that proved critical. He noticed that the edges of his negatives where his imperfect brushing created a less concentrated coat of silver chloride turned out to be more light sensitive. I sometime think that describes my approach to camera making.

One of the reasons I find his photographs inspiring is because most of them were done at Talbot’s home, Lacock Abbey, or in fairly nearby Oxford and London. A great majority of my photographs are done in my house or in the surrounding community.

I’m also impressed that even though he was one of the first persons to do it and had no formal training in visual arts, he took some pretty good photographs. I’m often inspired by them as I ride my bicycle around the city.

The text is far from being a formal scientific paper. It’s hard for us to imagine now, but photography was totally alien to the understanding of people of the day. He’s trying to explain what photography is, how it differs from previous methods of making images and what kind of things it might be used for. One of my favorite observations is that, unlike drawings, no matter how complicated or detailed the subject, it took the same amount of effort that it took for a simple subject. He also expressed surprise that his images recorded things that he wasn’t even aware of when he took the picture.

It was originally published in four unbound sets between 1844 and 1846. About 40 complete copies still exist. I once tried to see if I could get a look at one at the New York Public Library and was told it was too fragile to be accessible to the public. The copy I first encountered in the college library I worked at was a facsimile version published in 1969. Sarah later gave me a copy for Christmas. There’s currently a deaccessioned library copy on eBay and few used copies on Amazon for a reasonable price. The local public library system doesn’t have a copy, but the University Library has the same facsimile version I have. There’s a pretty cheap paperback version on Amazon.

The Gutenberg Project has a version on-line. It’s not a facsimile, but it does include all the text and the illustrations.

Another thing that brought this to mind was my piece on my distant participation in the autumn photo walk of the League of Upper Midwest Pinholers. I mentioned that I had never attended one their events. Tom Miller reminded me that he considered the events he used to organize at the Minnesota Center for Photography as the early gatherings of the League.

Tom and I became aware of each other just before the turn of the millennium on Gregg Kemp’s Pinhole Visions email list and later the on-line forum where we shared our photographs. In spring of 2003 Tom invited me to drive over to Minneapolis to talk about my photographs and how I made them to an annual event on pinhole photography he had been organizing for a couple years at the Minnesota Center for Photography. Impressed by the statewide institution, I totally misinterpreted the nature of the event and thought I was being asked to give a formal presentation like you might see at an academic conference and went completely overboard.

In preparing what I was going to say, I thought of Talbot and his attempt to explain photography to the masses. The Pencil of Nature consists of an introductory chapter and 24 photographs with an essay accompanying each one where he tried to illustrate some aspect of photography. I decided to use that as a model. I mostly used photographs I had already done, but I did take two specifically to make points about pinhole. Most of my work at the University where I was employed was helping faculty prepare graphic materials to present their research. This was also at the beginning of the availability of print-on-demand books and I was curious to try that. I set it up as a little 84 page book with the punny title of The Pinhole of Nature. 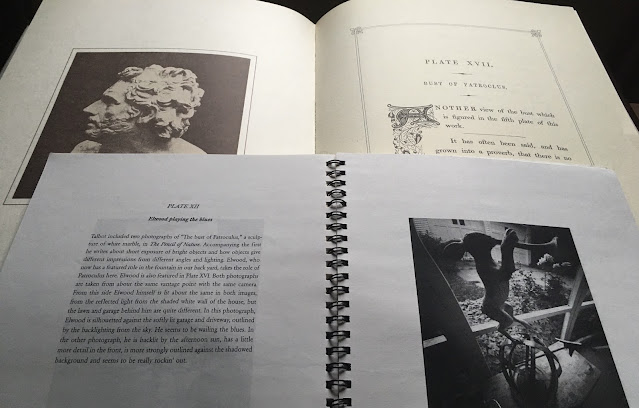 I published it on Cafe Press with a spiral binding, the only option they had available then. I sold eleven copies. They eventually deleted my free account for lack of activity and I recently put it back up on Lulu as a perfect bound paperback. No one has bought a copy yet.

I used to have a PDF version on my University web site, but that disappeared several years ago and I never got around to including a link on the blog.  Here’s a link to the PDF.

Seventeen years later my practice of pinhole photography has changed quite a bit, but I think the piece holds up fairly well. It still expresses my answers to the questions: Why Pinhole?; What Pinhole?; and What-Me-Pinhole?

Posted by Nick Dvoracek at 4:43 PM