This could have been included with the Remainders from our trip to Massachusetts. I had also taken the Tenth Anniversary iPhone Box Camera with me, but because of the unseasonably crappy weather, I never used it.

On our return, I left it on the kitchen table as is my wont with any camera that has film in it and a few that don’t. A summer sunbeam falls on a selection of fruits and pinhole cameras. 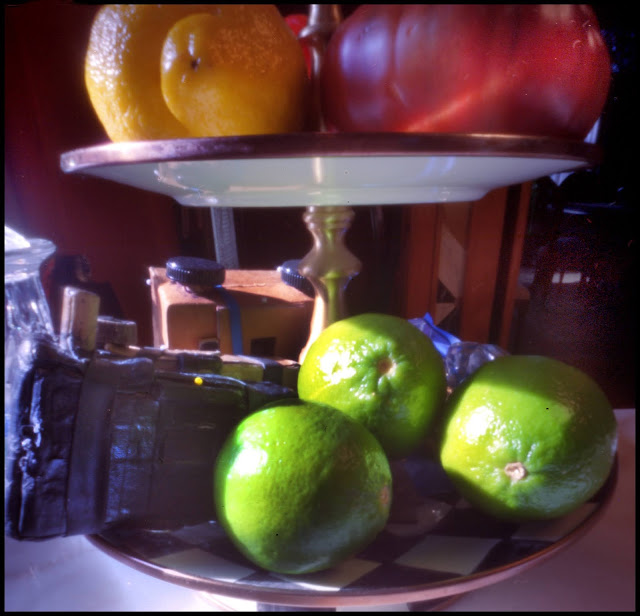 Sarah picked a bunch of pansy blossoms to decorate a cake and left a saucer full of them on the table when she was finished. The camera is less than an inch from the closest flower. 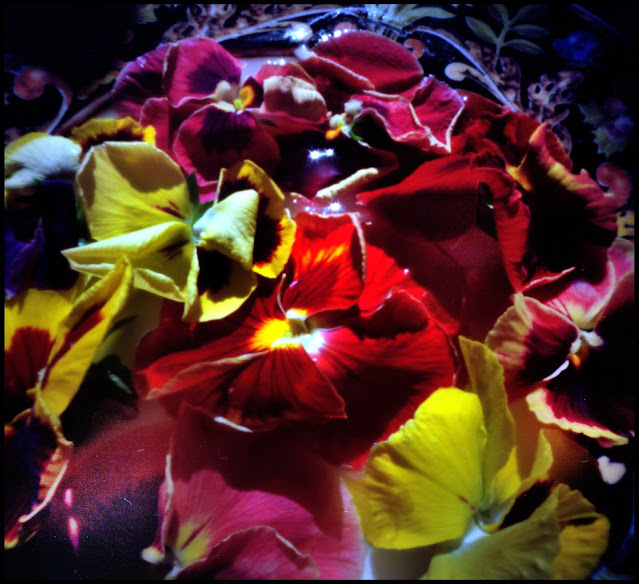 In a more active attempt to expose the film I took it on my bike to Lake Winnebago. This unusual little mound has a plaque in the ground dedicated to a park volunteer and benefactor. Just behind me is a historical marker identifying it as sort of the place where Father Allouez celebrated the first mass in Winnebago County. 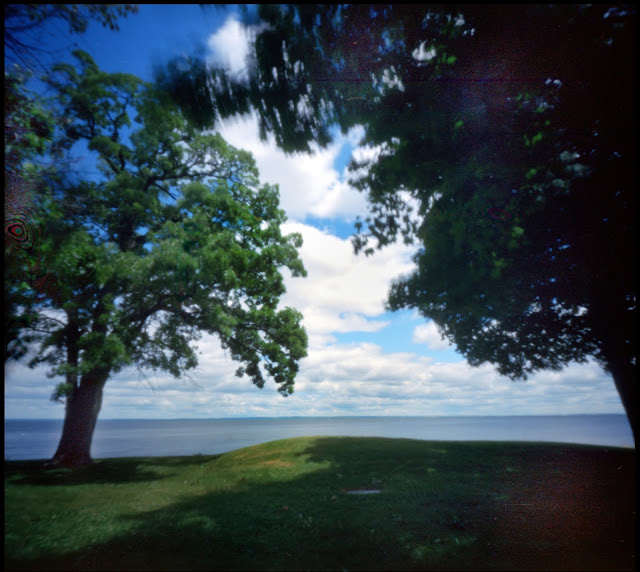 Water lilies near the boat launch ramps on Miller’s Bay. 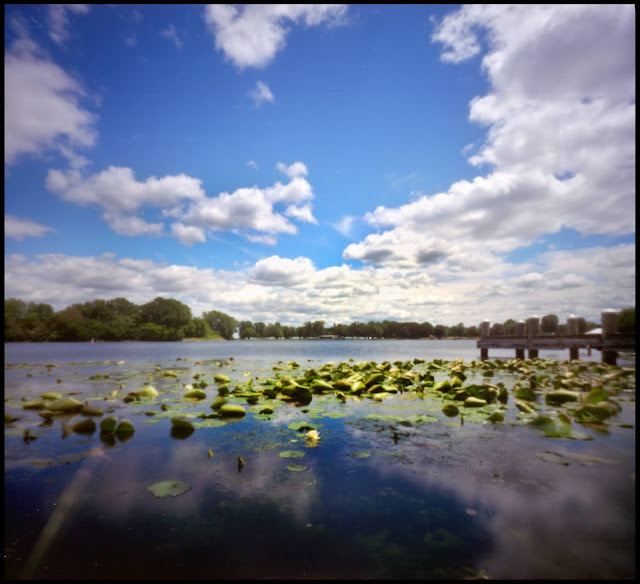 This was the weekend of the Miss Wisconsin pageant that takes place every year in Oshkosh. In the past they’ve had the contestants at the Farmer’s Market to meet people, occasionally with crowns on, and once under umbrellas held by pageant volunteers behind them. They were nowhere to be seen this year.
I walked the entire length of the Market and just couldn’t see anything that really compelled me. I saw millions of people I would love to take a portrait of but never will have the gumption to try that. Finally, getting quite frustrated going down the sidewalk behind the vendors, I saw this busker with her yellow violin case and blue violin. 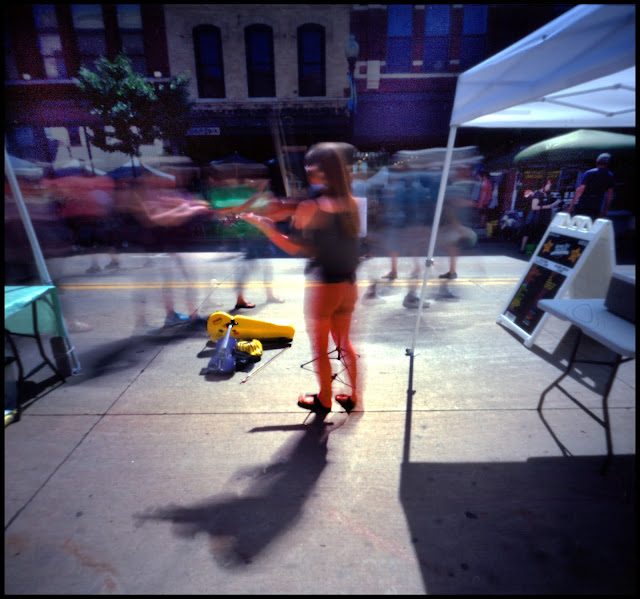 A few stalls down was the Oshkosh Food Coop table with my friend Maureen Muldoon, with whom I crossed Lake Winnebago on foot. 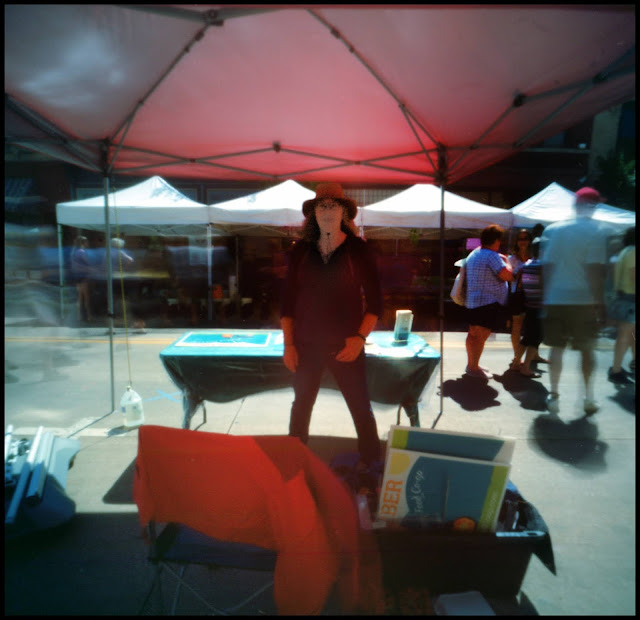 I didn’t have much of an opportunity because she was in continual conversation with potential and current members, informing them of the state of the store which is soon to open. I went ahead and made another exposure when she introduced this person as a member of the board of directors. 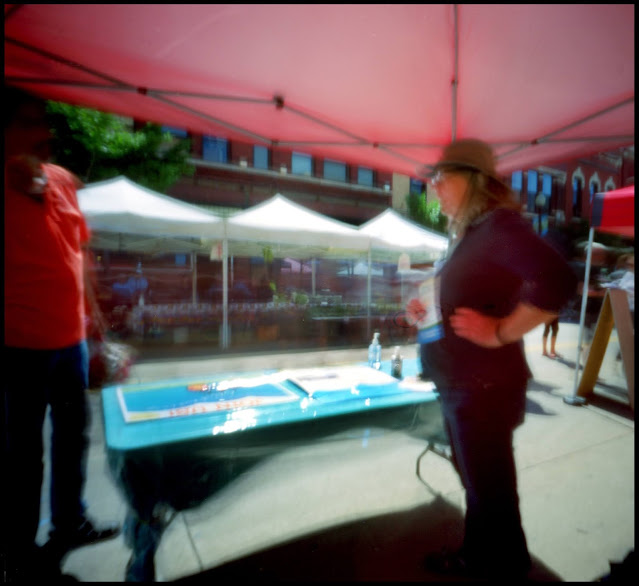 I was somewhat emboldened by now. Nearby was the Menomonie Nation Arena booth featuring members of the Wisconsin GLO women’s professional basketball team, interacting with the crowd and taking selfies with fans. They very graciously posed for me and seemed to take it for granted that my camera was a cardboard box. Their first game was that night. They’re now 3 and 1 and leading the league. That included a 115-35 rout over Chicago. Here’s a link to their schedule if you’re into pro basketball. 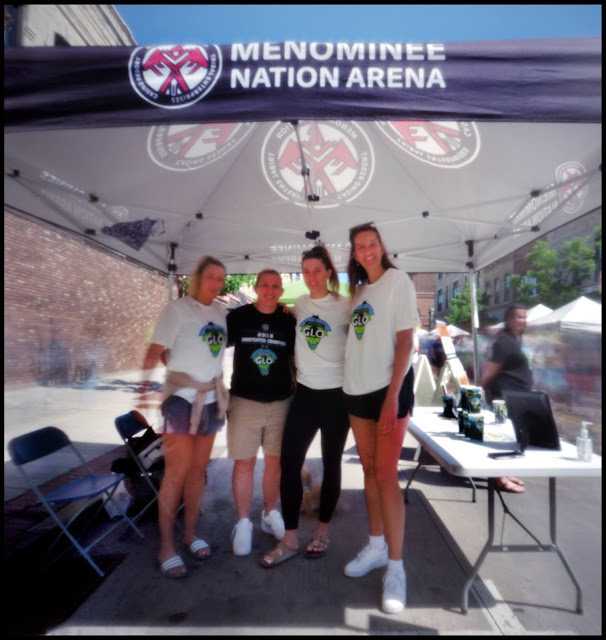 They were right in front of the Time Theater which shows vintage films on weekends. I turned to the left and saw this masked lady registering people for COVID vaccinations inside the theater. I told her I had done a piece on the testing site last fall. I didn’t think of it at the time but she might have been holding up her phone like that to take a picture of me. 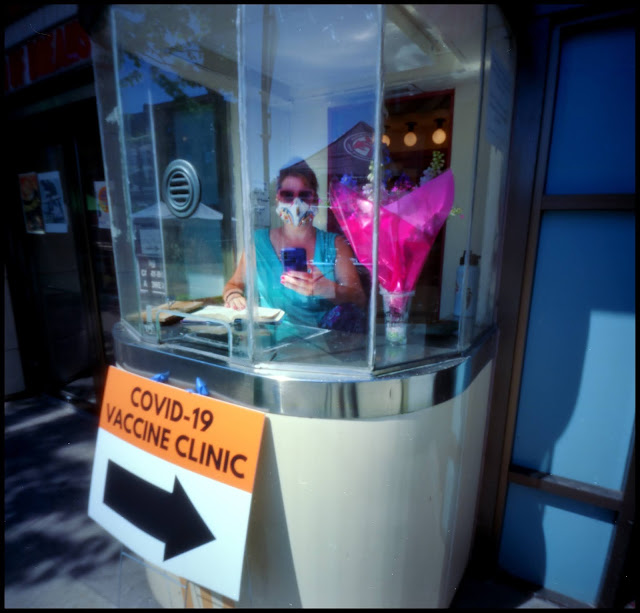 When I got home, the sun was nicely filtered through the pines on this Dracaena next to Elwood’s Pond, 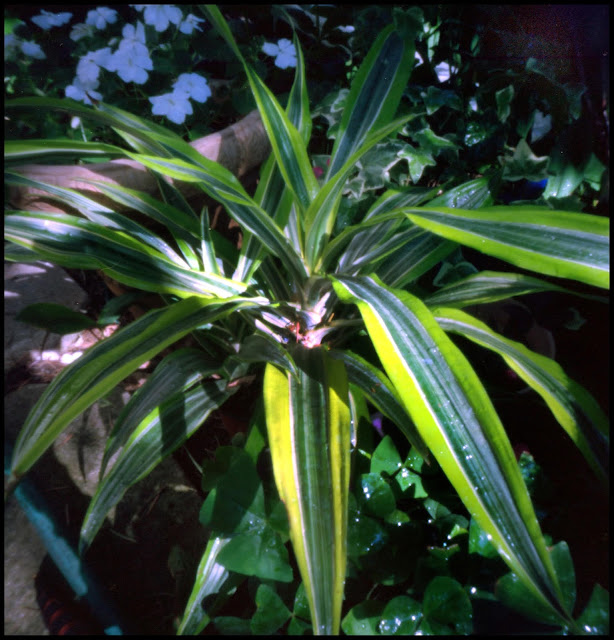 The Tenth Anniversary iPhone Box Camera has a .26mm hand-drilled pinhole 36mm from a 6x6cm frame.  The film is Ektar 100.

Posted by Nick Dvoracek at 4:36 PM