Making up with Neville

When I took the film from the trip to Massachusetts to Camera Casino to be developed, I looked on their film shelf to get some more color 35mm. They had a film I had never heard of - Kodak Image Pro 100. All the labeling was in Spanish. In packs of five it was as cheap as the Fujicolor 200 I had been using. When I looked it up, I found out despite the name, it's a new consumer grade film that's only recently become available in North America. The review I read criticized it mostly for it's graininess but hey, I likes me some grain.

As my bicycle rides have extended to 25 to 30 miles, it occurred to me that a five minute rest in the middle would make the last few miles less excruciating. Also, on YouTube a vlogger said that rookie bicyclists often neglect to eat some sugary fuel about every hour. Oops. I'm no rookie, but I never thought of that before. There are scenic little spots along my routes with a public bench to enjoy these sojourns.
I felt a little bad about going off on adventures without bringing Neville along, so I loaded him in order to try out the new film in these bucolic little places.
On my next ride, the break was in a place I had never been to before, the county public boat launch on the southwestern shore of Lake Butte des Morts. Most of the lake is surrounded by swell estates, but the need for the masses to launch their boats is provided for by the county. Historically, there was a little inlet in this place but now it's an artificial lagoon with boat friendly shores. 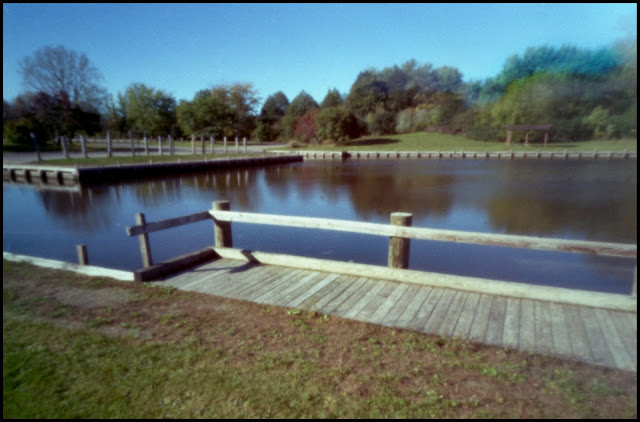 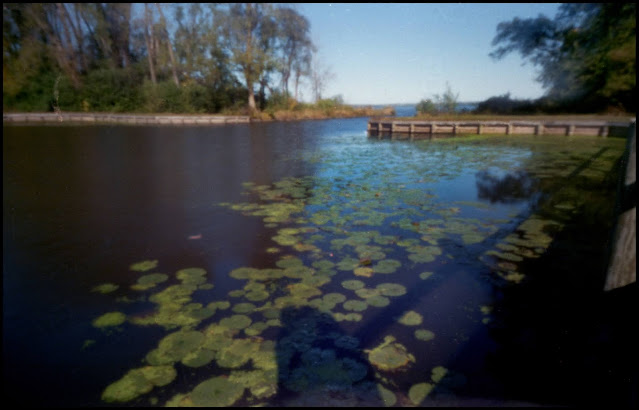 A few days later south of town, I intended to stop in the small village of Van Dyne, but couldn't find a convenient bench. In the big heat earlier this summer I had stopped to buy a soft drink at the "country market" and at the insistent urging of the proprietor ended up having to politely take advantage of the air conditioning along with four conservative looking fellows having afternoon beers. This time, I decided to continue on to the shore of Lake Winnebago and found this bench on a dock in an otherwise undeveloped narrow strip between the road and the water. 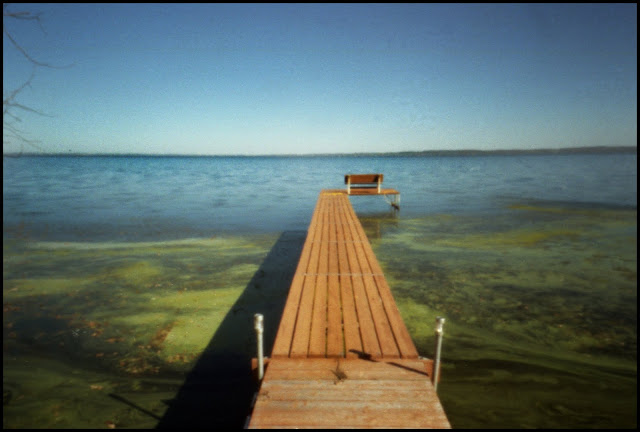 I had dressed too warmly and brought a chocolate covered granola bar in my pocket. I had to squeeze it out of the wrapper like a Mercury astronaut to keep from getting chocolate all over my hands. 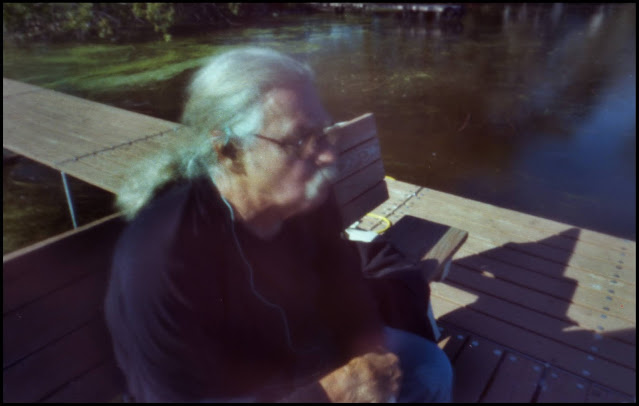 During spooky season, I made a pie for Sarah's blog. 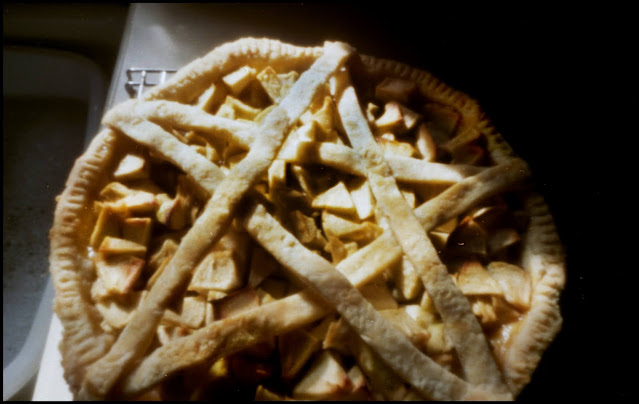 We went out to Fernau's Garden Center to get pumpkins for Jack-o-lanterns. This fall in our garden, we had the best results we've ever had with pumpkins, but I understand it was a bad year for commercial growers. These tables are usually packed right up to Halloween. 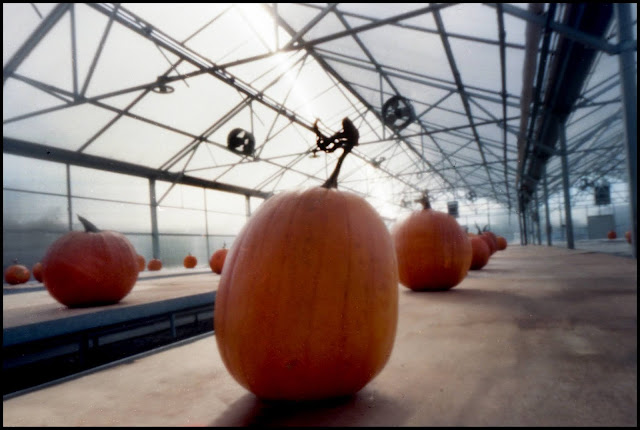 They seemed to have plenty of these decorative gourds, 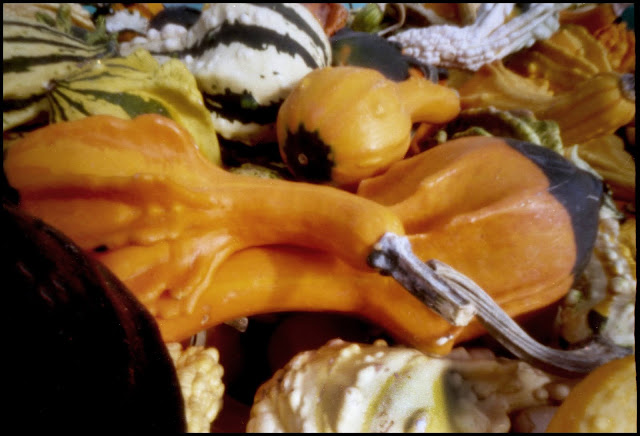 I had a picture accepted into a juried show at the Neville Museum in Green Bay (no relation to my camera). Looking for further entertainment for the trip up there to deliver it, the Botanical Garden's web site's challenge to see their autumn color looked like potential blog material. This little grouping in the parking lot seemed like a good omen. 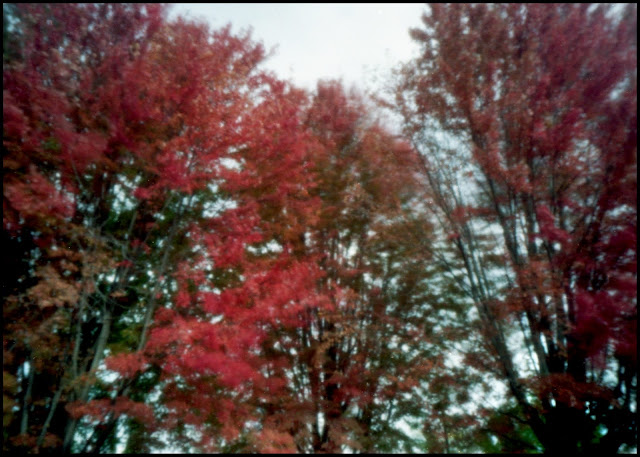 We went in the morning because the forecast was for probable showers in the afternoon. It looks like the clouds were a little frisky over the bay and it was getting pretty overcast here on the west side of the city. 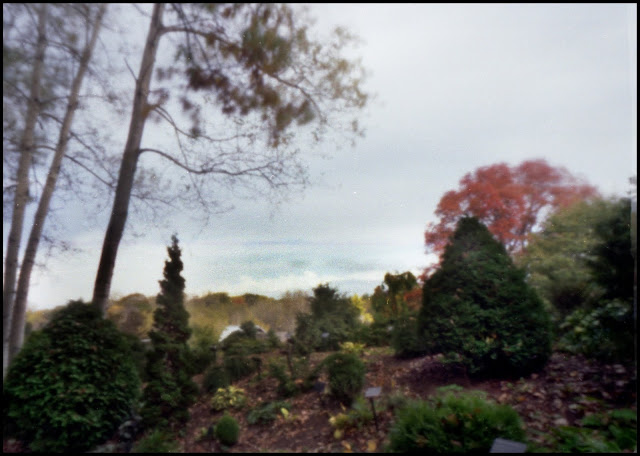 We had been here about fifteen years ago when it was still being developed. They've really come a long way and it's now a very professional garden with nature trails looped around its boundaries. 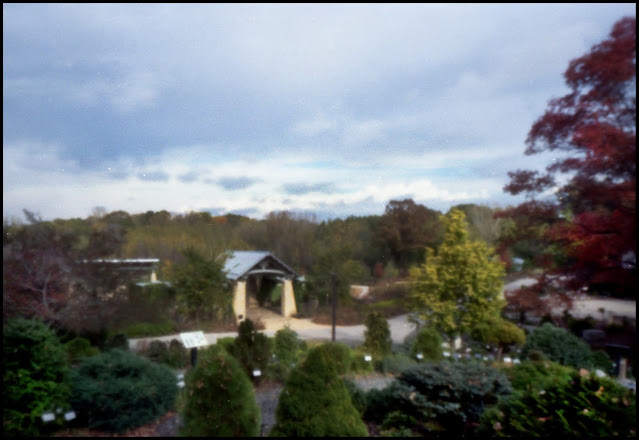 It was really kind of shocking to see so many blossoms on October 20th. The rose garden was one of the best we've ever seen at any time of year. 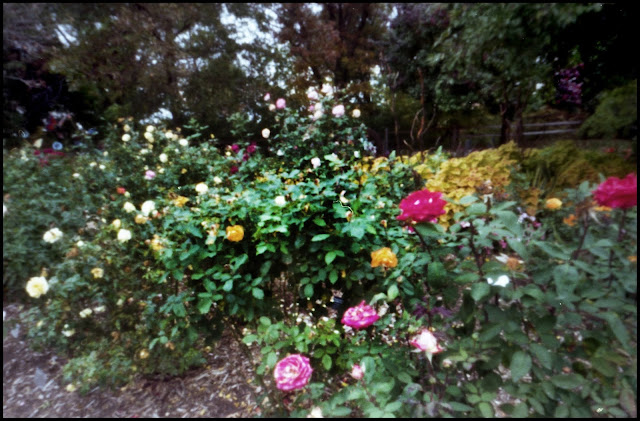 This zinnia was a little worn but I always appreciate it when a flower is polite enough to rest on a post or a bench so I can take a close-up. 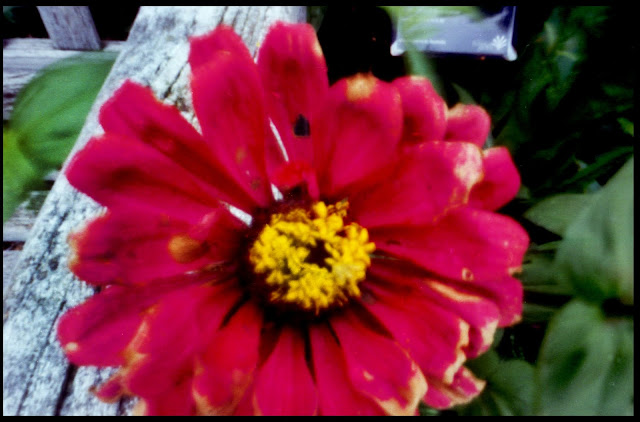 The Herb Display Garden is arranged among these geometric box hedges. 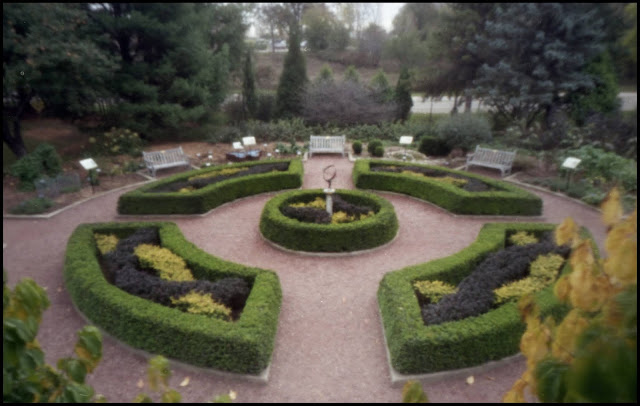 It's overlooked by the Schierl Wellhouse & Garden. Almost everything is named after a benefactor. That could explain some of their success. 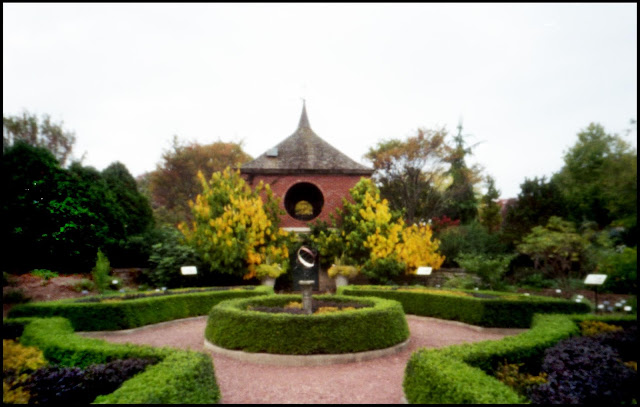 A bench under the arbor in the rustic English garden. 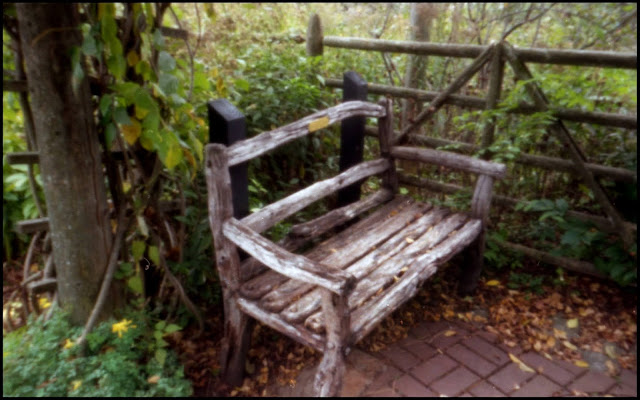 Next to the pond between the Children's Garden and the Hobbit House Restrooms is this giant willow. Adding to the quaintness of the scene were a group of Mennonite women in their colorful long dresses and white bonnets. One of them was taking pictures with a folding camera. 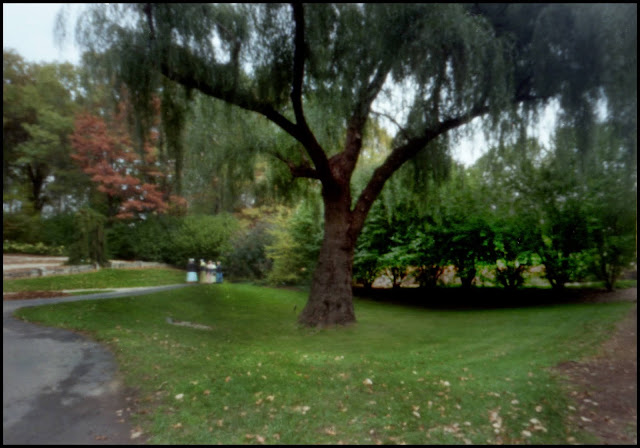 We went into the city and had lunch across the street from the Museum at the old railroad depot, located next to the Fox just about where the first European settlement in Wisconsin was. 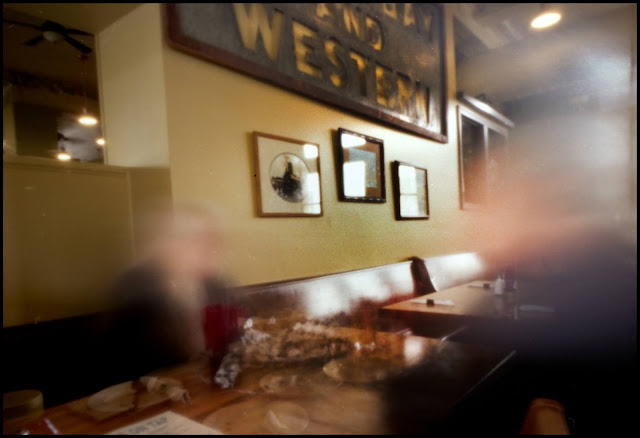 I rode down to Asylum Point one day just to see how the new bridge is coming. There's a solid looking footing on either shore, but that's about it. 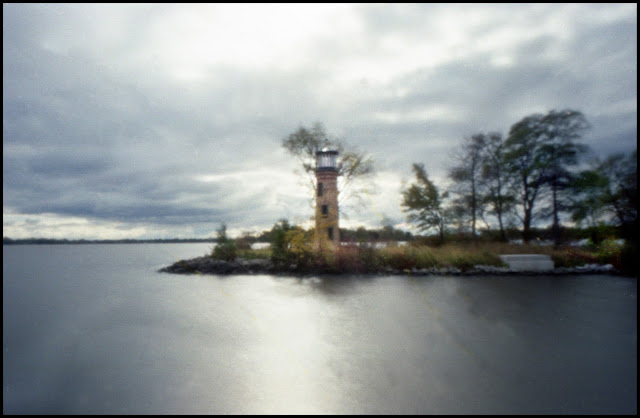 I didn't stop there. My break was on the opposite corner of the city at the Sawyer Creek Trail. 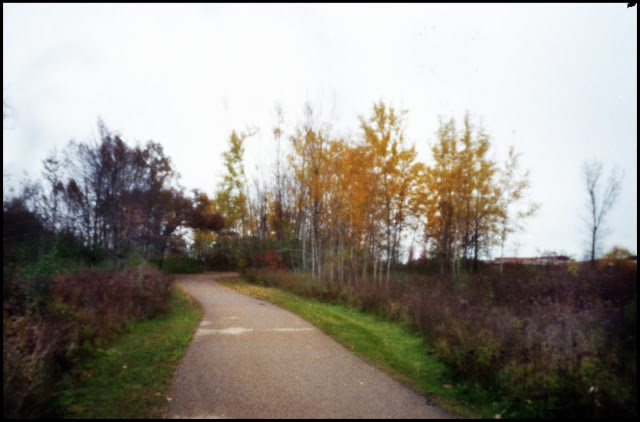 All the benches are memorials to somebody and this one gets festooned with plastic flowers which are replaced every so often. 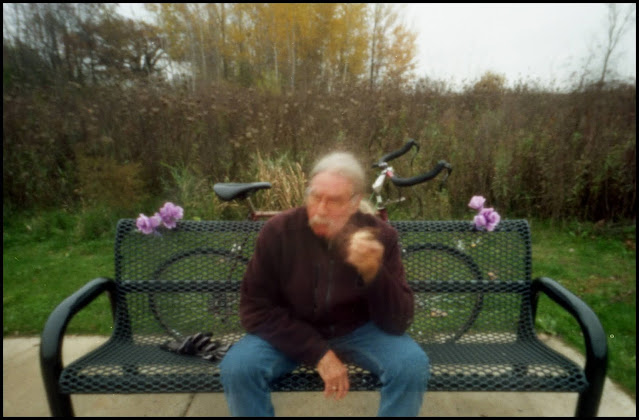 Another ride, up north to Neenah. This little lighthouse at Kimberly Point is where the Fox leaves Lake Winnebago. There's a nice plaque explaining how the richest person (as in Kimberly-Clark) kept the other rich people from making this just another wealthy neighborhood and made it into a park. 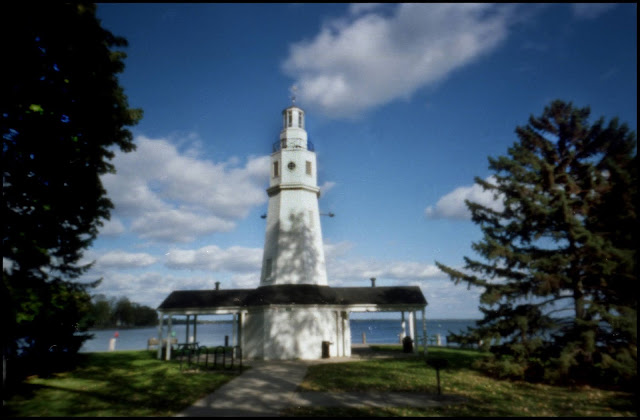 I rode a little farther along to Riverside Park to enjoy my granola bar. 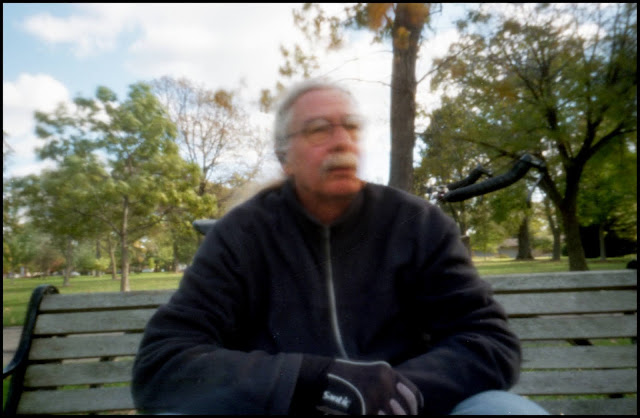 The view down the Fox toward downtown Neenah, which is partly on the southern shore and partly on Doty Island on the right. 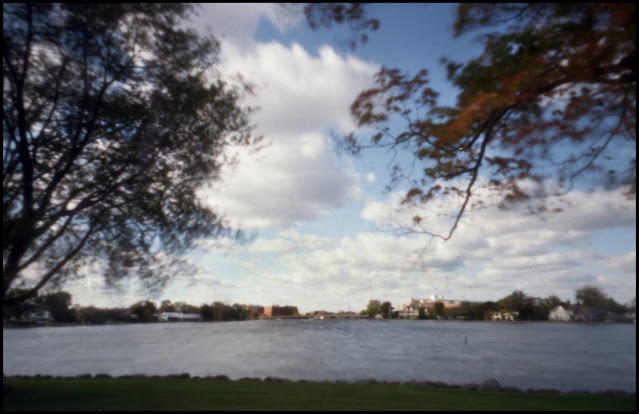 Wanting to extend my ride a bit later in the week, I looked to see if a there was a reasonable route over to Doty Island and back and discovered the Loop the Little Lake Trail which repurposes several railroad bridges to cross the Fox to the island, then over the north branch of the river for about a hundred yards in Menasha, and across Little Lake Butte des Morts, another wide spot in the Fox. 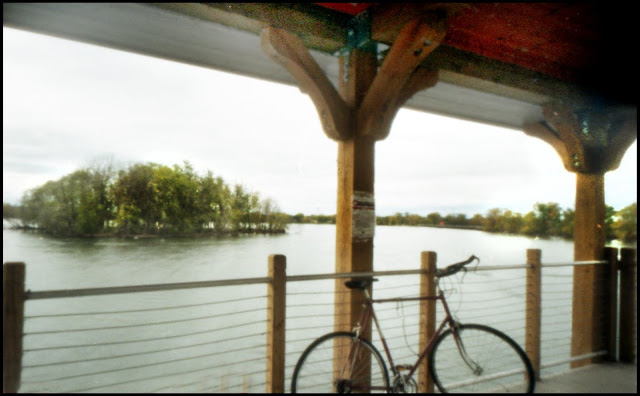 Unlike it's larger namesake up river, Little Lake Butte des Morts is surrounded by urban and often industrial development. The bridge terminates in Fritse Park in the recently renamed Town of Fox Crossing. It used to be the Town of Menasha, but they got sick of explaining the difference between the township and the city. 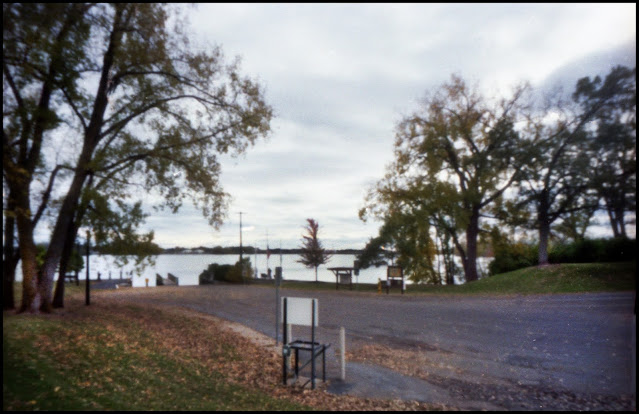 Most of the park, and a couple others on the loop, were created as a result of the Natural Resource Damage Assessment and Restoration (NRDA) Fox River PCB Clean-up Settlement. I wasn't kidding about the industrial development. 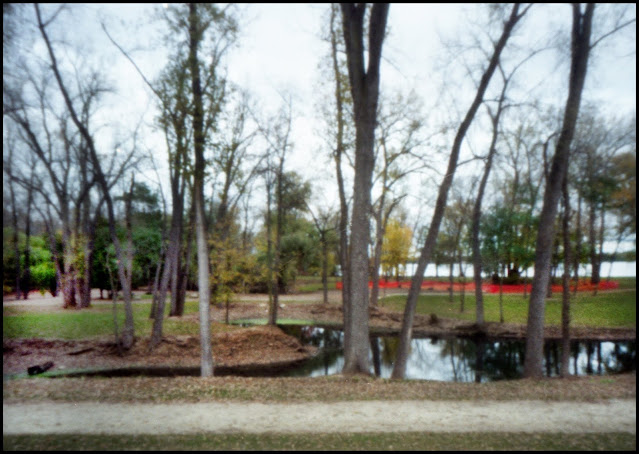 About the time I had gotten to Neenah, the clamp on my handlebars started to feel loose. I was worried I was going to have to ride very carefully (i.e. slowly) all the way back to Oshkosh. When I pulled up to a bench at the park shelter to rest, a bicycle repair station appeared before me including the Allen wrench I needed. 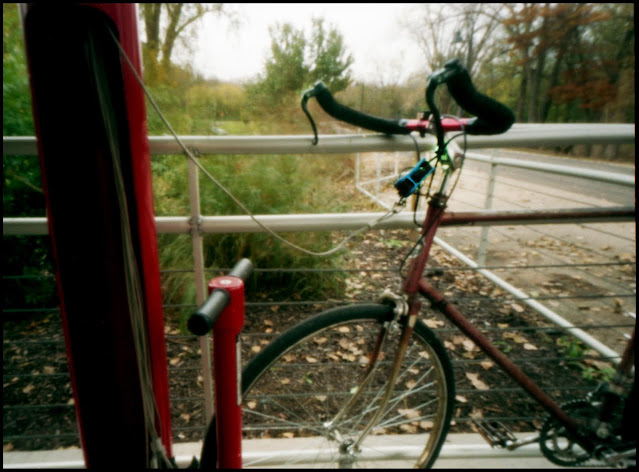 On another ride west of Oshkosh, I again stopped at the County Boat Landing. 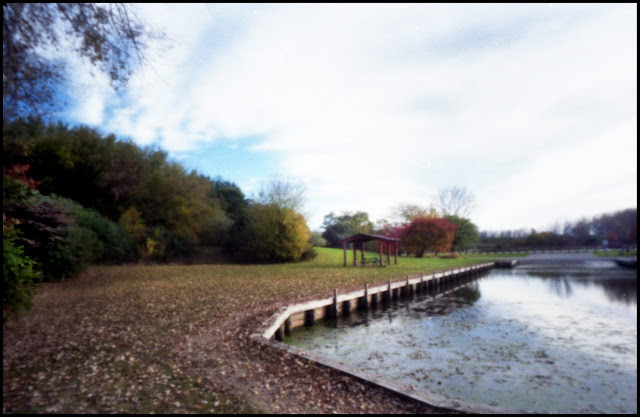 This time on the opposite side. 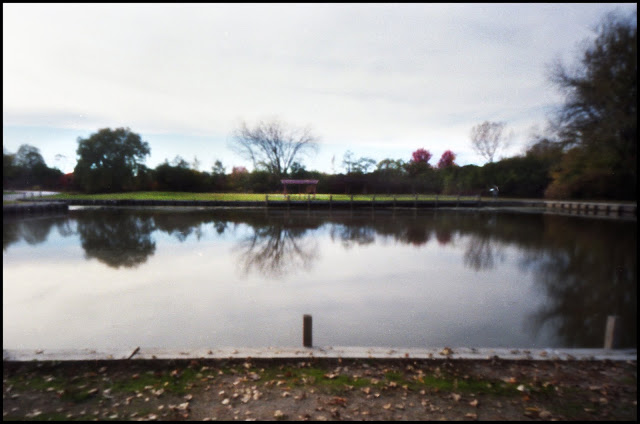 Looking down the shoreline slightly northwest toward where the Fox and Wolf Rivers come together to form the lake. 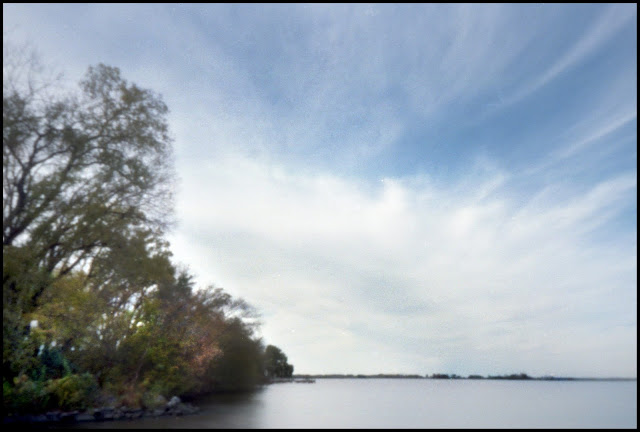 Neville has a hand-drilled .17mm pinhole 24mm from a 24x36mm frame. The film is fine. I can't really tell any difference from all the other cheap 35mm film I've always used.

Posted by Nick Dvoracek at 8:59 PM