It doesn't happen often but I do occasionally earn some money from pinhole. The workshop for teenagers at the Trout Museum of Art I've been working on since last fall finally occurred in the middle of July. To document the experience I chose the semi-panoramic Pre-Populist from early 2006. I had made two cameras for 35mm film previously. The first at 50mm with a 24x50mm format, just to be different, and the second at 35mm with the normal 24x36mm frame. This camera again used the wider format, but now only 24mm from the pinhole, so the horizontal angle of view is ultra-wide 92 degrees. I chose it for this event because I had used it to document the last pinhole workshop for kids in 2006.

In order to reduce the time to finish the camera, I cut parts out of the templates and assembled kits ahead of time. 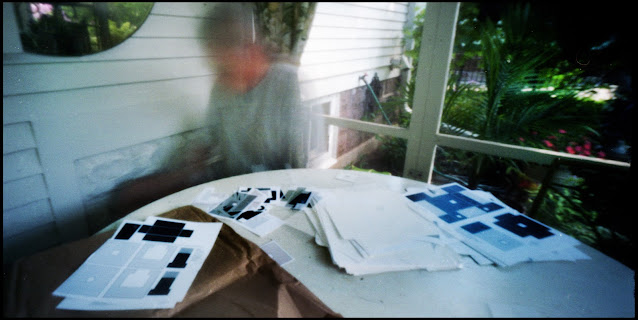 I envy poetry teachers who show up with a pen and notebook. Teaching pinhole always seems to require hauling a trunk full of stuff. 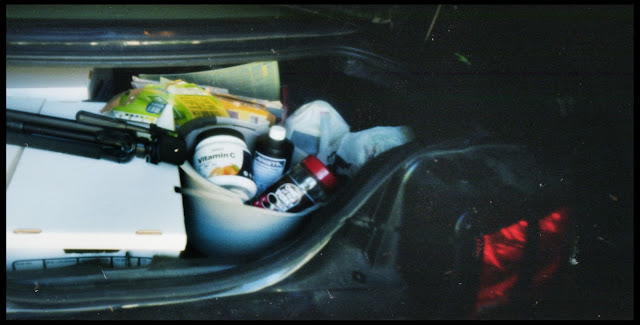 All set up with an array of cardboard to choose from for the outsides of their bespoke cameras. 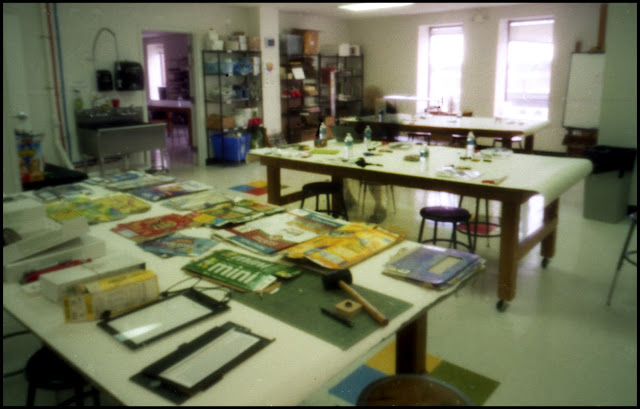 There were a few surprises and confusing moments, but they all successfully made a camera. (with a repair or two.) I can't help pointing out how this picture is an example of a wide angle camera messing with your perception of space. All these cameras are the same width.

The setting in which they will make 12 exposures is Houdini Plaza, the center of downtown Appleton.

When it was time to expose the film on Wednesday, there turned out to be near ideal conditions. Mostly sunny with the sky washed with a few clouds.

I'm pretty poor at multitasking, but I did sneak a few photographs of the session. We had practiced with an empty camera the day before and they adapted quickly to using a tripod and judging the exposures based on the table provided. Their exposures ended up being pretty consistent. 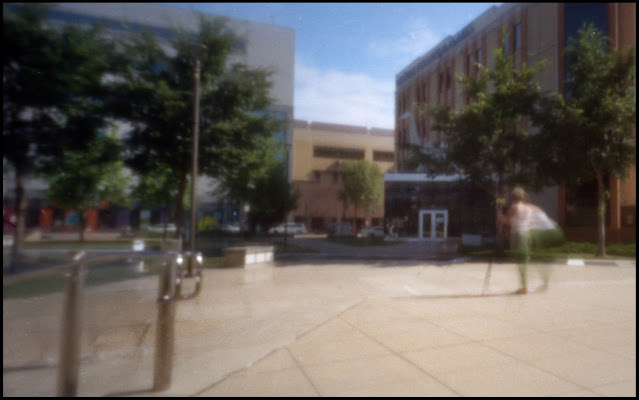 I warned them about the sun shining on the pinhole, but also said they might want to try at least one exposure that way to see what happened. I wasn't trying to do that at all when I got all this spectral flare.

Thursday, when we developed the negatives, started out appropriately dark and wet. Ilford FP4+ semistand developed in caffenol, by the way, a combination as forgiving of imperfect exposures as you can get.

I wanted to be as analog as possible, but a wet print darkroom is just not doable. We captured the negatives with iPad cameras using an app called Negative Me which surprised me with the quality the resulting JPEG. 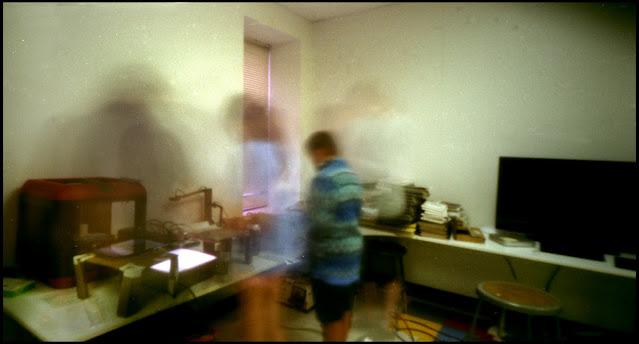 They spent some time editing. Some found it intriguing and one thought his images really didn't need it. We made letter sized prints on a color copier and had a show and tell which unfortunately consisted mostly of me pointing out some technical or compositional feature of their pictures or relating them to some movement in photography or modern art. The pictures were pretty good for a first roll of film and a few were very good. I'm sure I couldn't hide my excitement when one of those got put on the easel, but I tried not to gush. 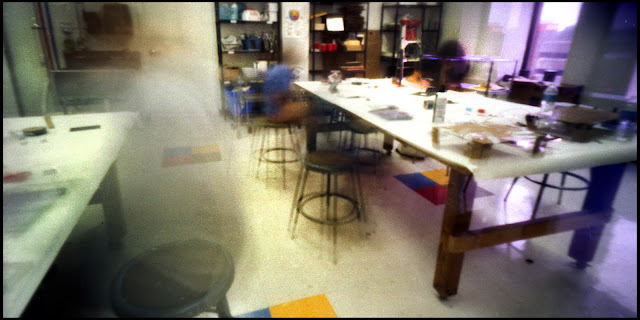 Now that I've done my duty spreading the zen of pinhole, nature demands her part.

For the second year, I prevailed with my human-powered, cutting-edge tools. The weekend after the workshop, I had COVID. It didn't seem odd that doing this made me really tired. We had just had our second booster the week before the pinhole class. Sarah finally realized what was going on and we got tested.

I'm always impressed by the toughness of the volunteer petunias that grow in the cracks in the driveway. Whatever happens with climate change, I'm sure the privets and the petunias will be just fine. 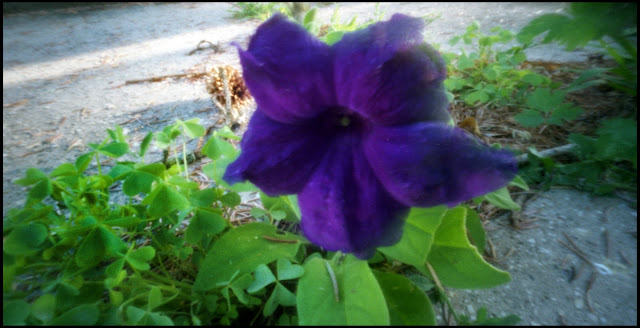 The light on the lanai was particularly charming one afternoon.

In the early evening several days later, the camera was still sitting on the tripod in the same spot. There was a vigorous storm that began with a brief but powerful series of strong gusts that knocked out power lines all over eastern Wisconsin. At the corner of our block it knocked out the electricity, which was restored in the middle of the night, and the fiber link to the internet, which was out till the next evening. This exposure was about forty-five minutes through most of the darkest part of the storm.

When the clouds thinned a little bit we sat out there until nightfall with a battery charger for the phones. The light from sunset on the tail end of the storm was really wierd. 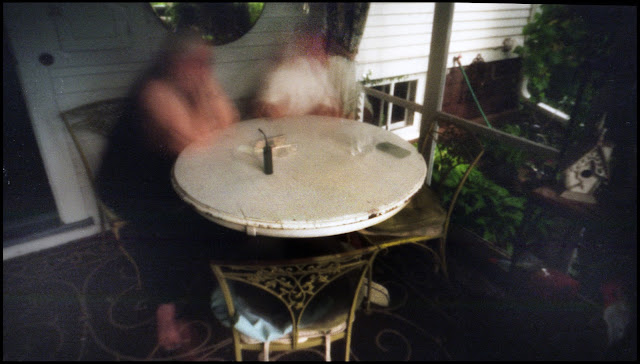 A week later, I attended the giant AirVenture convention of the Experimental Aircraft Association at which I exposed 36 frames of medium format film. I complained in that piece that long slender airplanes were a challenge with a square negative, but they fit nicely in this 2:1 format.

The wide angle also allowed getting the whole plane in from the front of the crowds.

The area at the end of Runway 27 and around the other side is known as the North Forty - rows of planes spreading out to the horizon.with tents under the wings along side the taxiway

Back on the porch, building a new camera just for the fun of it for a secret project. 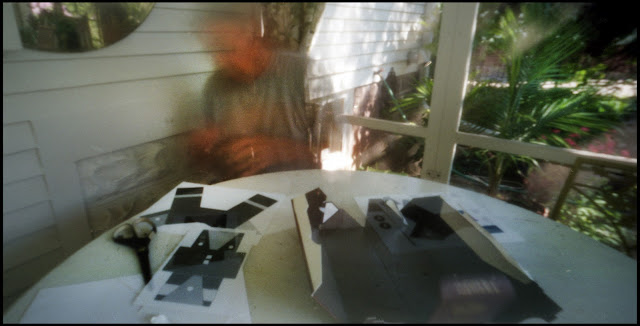 There weren't enough registrations to run the August session at the Trout Museum, but they've scheduled workshops for adults in the fall and winter so maybe I'll get another chance to be a professional pinholer.
The PrePopulist has a .15mm Gilder electron microscope aperture 24mm from a 24x50mm frame. The film is Fuji 200.
Posted by Nick Dvoracek at 5:01 PM