An email just came from the Museum of Modern Art about their photo club which seems to exist only as a hashtag #MoMAPhotoClub. As with all photography groups, a monthly challenge is part of the program. This month it's Inspiration of Place, inspired by the exhibit currently on view at MOMA of Matisse's painting The Red Studio and the works depicted in it. I can get in to that, except the whole east side of Oshkosh is going to have to be my place, since the pictures are already done.

Also involved here is inspiration by a current exhibit at MOMA's uptown neighbors at the Metropolitan Museum of Art, a retrospective of the work of Bernd and Hilla Becher. I saw an exhibit of their work at the Pinakotek Moderne in Munich a few years ago. Seems I was more influenced by it than I thought. Suffice to say that the New York Times reviewer saw it necessary to mention their use of a wide angle of view with a rising front.

Film testing the camera was another inspiration. It was built for a mystery project (not classified or related to national defense). It's an Evil Cube with one new modification to the film transport to keep the reels parallel (it worked).

As bar food goes, Jansen's is pretty good, but like a lot of bars, their unappealing dining area is somewhat hardened and they leave the door to the flourescent-lit kitchen open. I've ridden past several times this year and concluded I'd have to come back with a 60mm camera with a rising front. It was a likely place to begin. 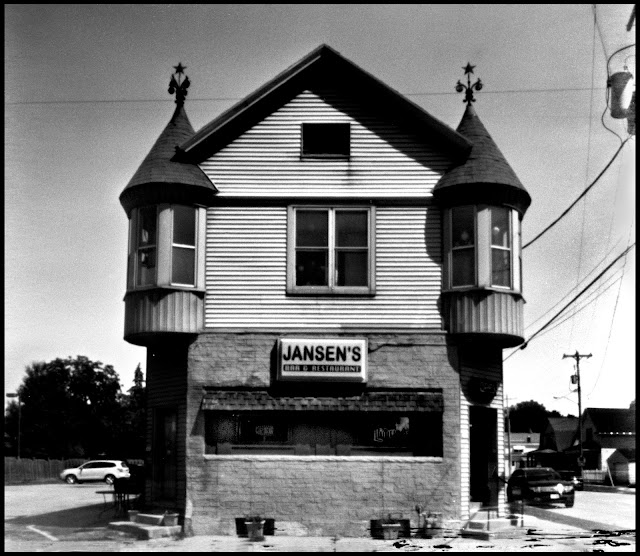 The base of a column in the front of the old Oshkosh Northwestern newspaper building. I went on a tour once when they still printed the paper here in 1995. It was recently purchased by an Oshkosh native who made some money in Silicon Valley and has opened two restaurants just south of town but he's not saying what will be done here. Mediterranean food with a nice dining room would be a good idea. 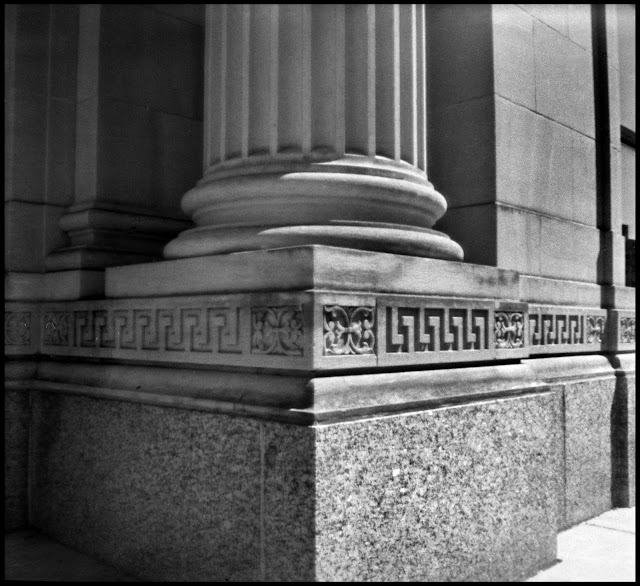 An assembly of cuboid shapes modeled by the morning sun on the back of the east side of the 400 block of Main Street, showing off a little of the famous infinite depth-of-field of the pinhole. 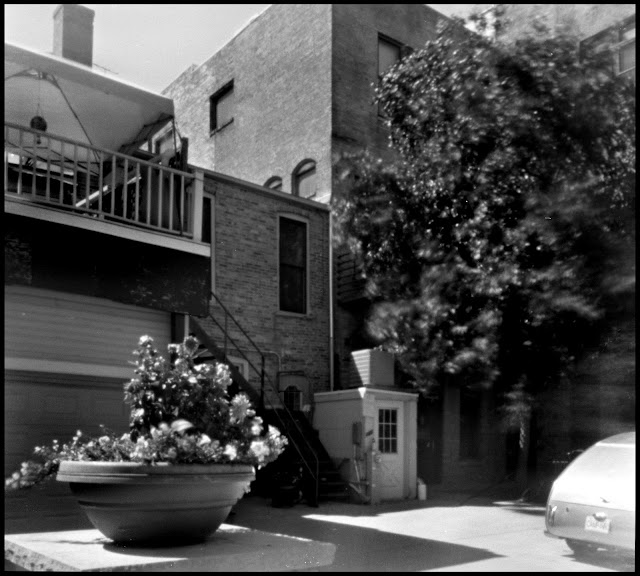 A 1913 apartment building with a pennant string and contemporary Mandella Barnes for Senate sign on the third floor balcony, and a peace symbol in a second floor window which is outside the frame. While setting up the tripod, a bearded young man rode up on a bicycle, and made a brief call. I asked if he minded me taking a picture of his building. He said "No"  and carried his bicycle inside. 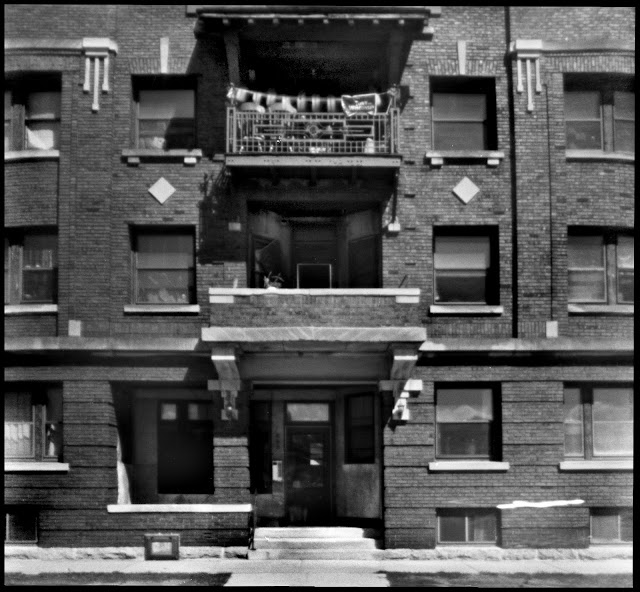 The Doe House was built by a minor lumber baron in 1869. It survived the 1874 fire that leveled downtown Oshkosh which stopped just behind the brick houses across the street. Recently restored by one of his descendants, it's now a boutique lodge. 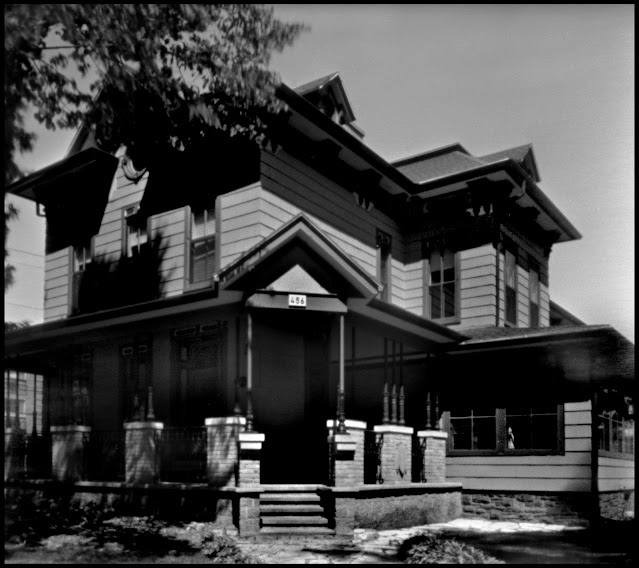 I debated whether to photograph the garage of the Doe House at the end of an allée of trees because there was a neighbor working in the garage on the right. I finally got up my nerve. About when the camera was set up on the tripod, I noticed someone unloading supplies into the back of the house. When he saw me, I asked if it was OK to take a photograph. It was one of the owners and he came over and we had quite a conversation. They have an artist-in-residence program where they provide a few nights lodging to artists "for inspiration and respite from isolation during the pandemic." I don't need a place to stay, but it might be interesting to photograph the interior. He said that might be possible. After looking at their website which is filled with gorgeous photography, I worried I couldn't really contribute anything, but then realized that my black and white pictures, probably tightly cropped and entirely lit by the windows, would be different than the pictures intended to make people want to stay there. I'm not selling this very well, am I? 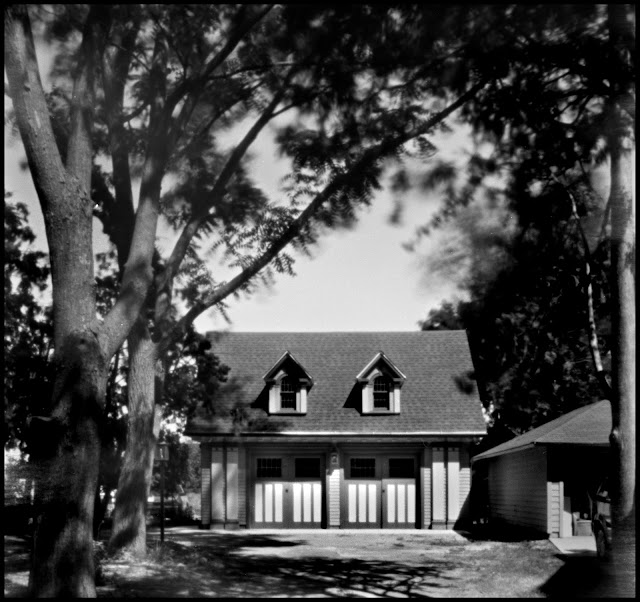 Nevada Avenue is one of the few remaining streets to cross the railroad. For several blocks on either side it's all factories and warehousing. One of the buildings has been restored to kind of nice apartments on the other side. They intend to finish it, but now this side is still a half demolished eyesore. Sarah says it's the ugliest stretch in town. That sounds like a challenge to me. The idea is to take beautiful pictures, not pictures of beautiful things, right? An arrangement of doors, walls, electrical units and a bit of tape that use to hold a sign on the door. 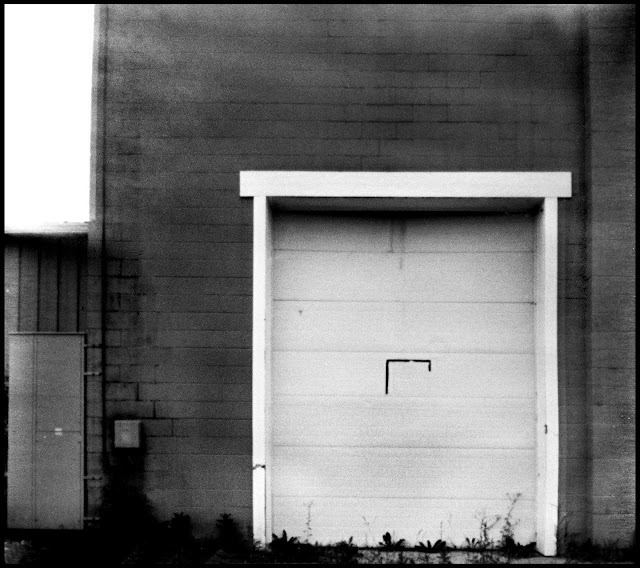 In a discussion of the illusion of depth, I once referenced Aaron Siskind's photographs of peeling paint in Arizona. How about some paint peeling off some clapboards on the side of a block-long storage unit building? 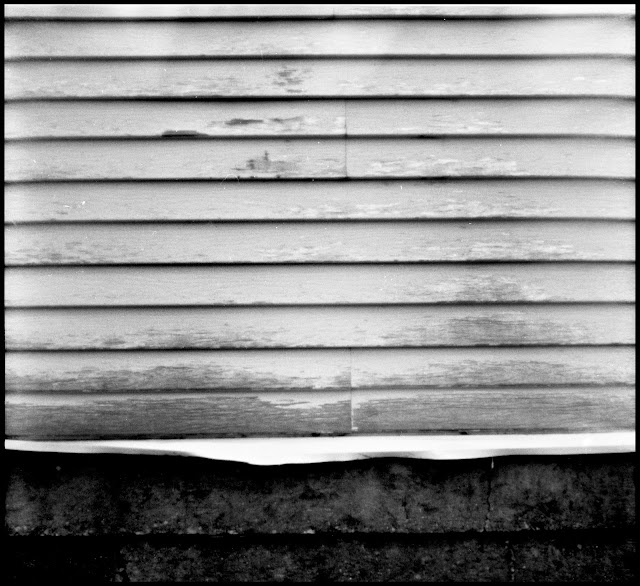 Oshkosh's sense of place is defined by it's location on the west side of Lake Winnebago, where the Fox River flows in to it. The T dock in Menomonee Park shelters some duckweed. 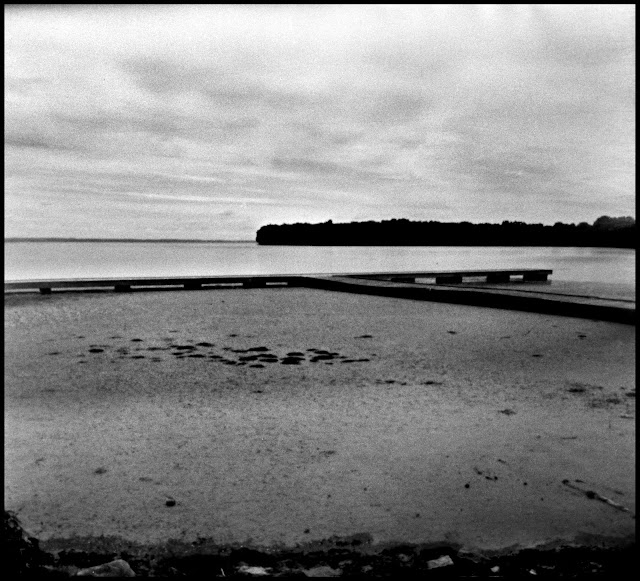 Several sailboats are anchored across from the boat launch farther down Miller's Bay. 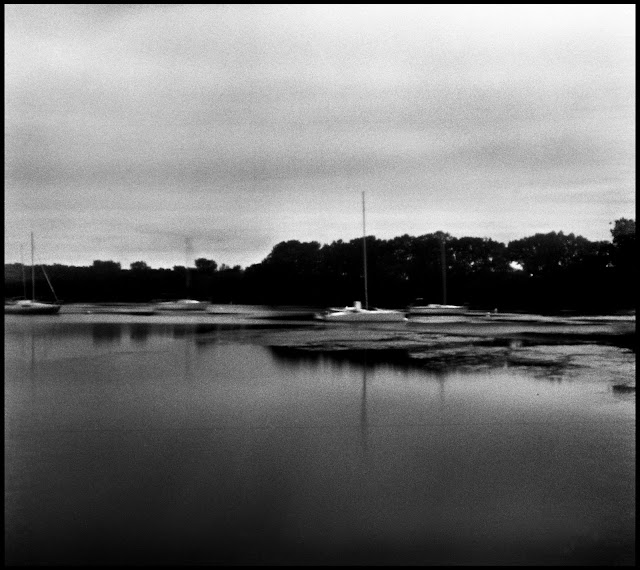 This knarly old pine with one side completely open looks like it wants a hug. 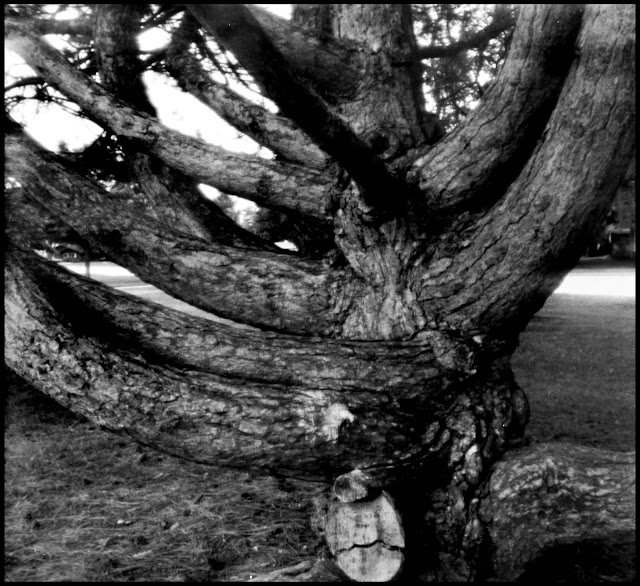 This building by the shore looks like some sort of maintenance shed, but I stopped and read the sign in front of it today. Some of the storm sewer system on the east side is below the level of Lake Winnebago. This building contains a giant pump which sucks the rain into the lake before it floods the town. That use to happen fairly regularly. My sparkplugs once got wet trying to get home going down a flooded side street in the middle of a tremendous downpour. Do you think architects ever add details just so it looks like there's a face on the wall? 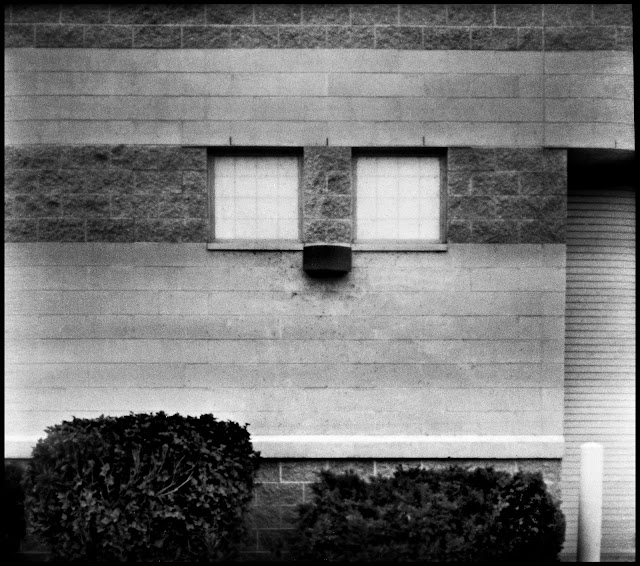 The camera has .30mm pinholes on the axis and 15mm above the axis 6 cm from a 6x6cm frame. The film is Arista.edu 100 semistand developed in Caffenol.