Winter light in the city

One common recommendation is to make photographs when the sun is low in the sky so the directional lighting provides dramatic modeling of your subjects. Most of the time, that means either quite early in the morning or late in the evening. In relatively northern Wisconsin, around the time of the winter solstice, the sun never gets more than 22½° above the horizon so you can take advantage of the dramatic light in the middle of the day.

I had gone out for a ride in the mild sunny weather on the afternoon of the 20th and wished I had taken a camera with me. On the day of the solstice it was cloudy, but the next day was completely clear. The forecast looked like I wouldn't be able to take advantage of the low winter light again for awhile so I took the opportunity and set out on my bicycle about 9:30 am. The downside was that the temperature had dropped to 12° F.

I've wanted to take this view of the Pabst Castle for a while but there's always a car parked in front of it. Despite being on a business day and the rest of the lot being full, this time the view was unobstructed. 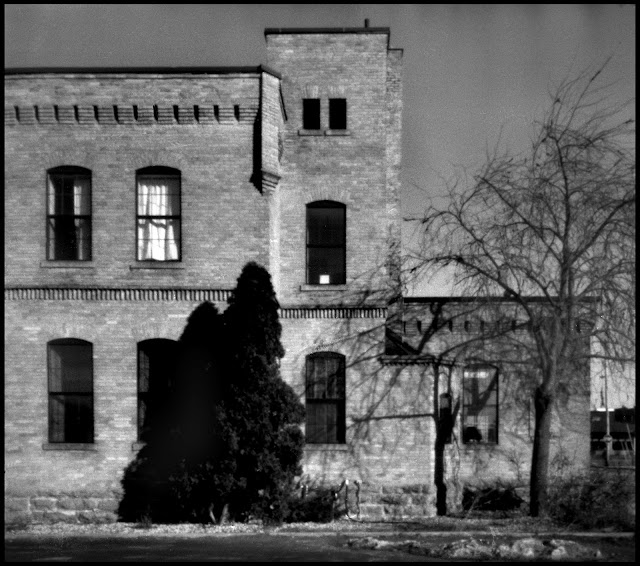 As I rode past the library I noticed one of the lions roaring directly at me. The old front staircase and the landing between the lions is blocked off by a little railing. At 6cm from a 6x6cm negative, this camera is only modestly wide angle as far as pinhole cameras go, but I still needed to get closer to get the image I wanted. I stepped over the plantings at street level and put the tripod over the railing on the landing. I could barely reach the shutter on my tiptoes. I'm amazed that the camera was level and the composition exactly like I wanted. 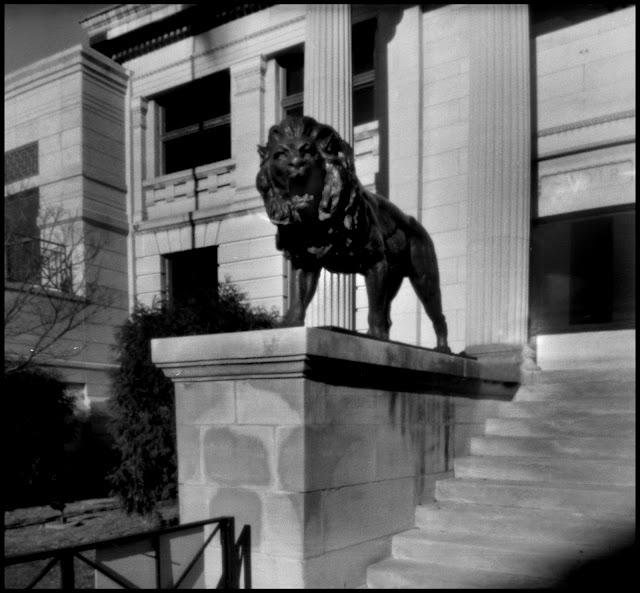 I've photographed the loading docks at the public library before to demonstrate the utility of a rising front, but the film was curved.  Looks flat this time. 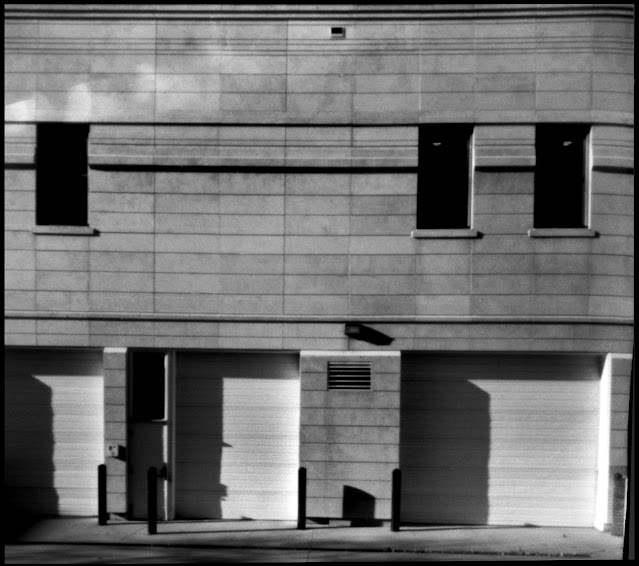 The front of a building on Main Street that I've photographed the back of before. Originally built in 1900 as the Frank Percey Gun and Fur Shop, it was restored about five years ago and recently turned into an Elsewhere Market and Coffee Shop. 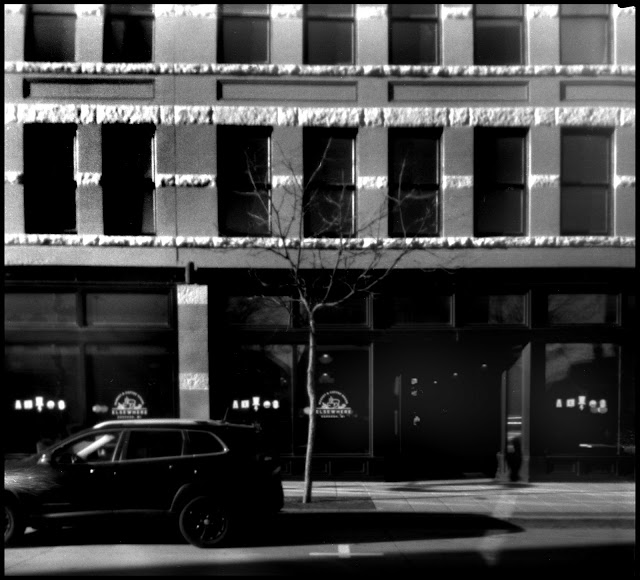 The Roxy, a classic Wisconsin supper club on Main Street. Inside it's like a time machine to the '50's 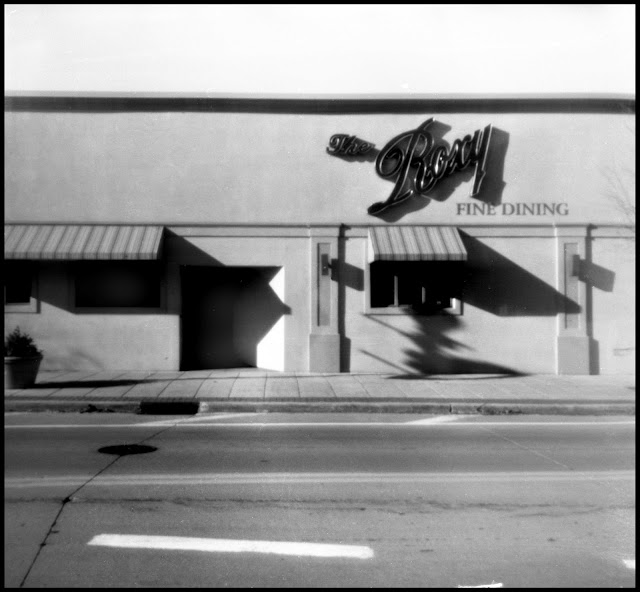 The front of this building on the 500 block of Main Street used to be a resale shop. The ventilation stacks and street lamp in the back probably date to when it was Oshkosh Steam Bakery. 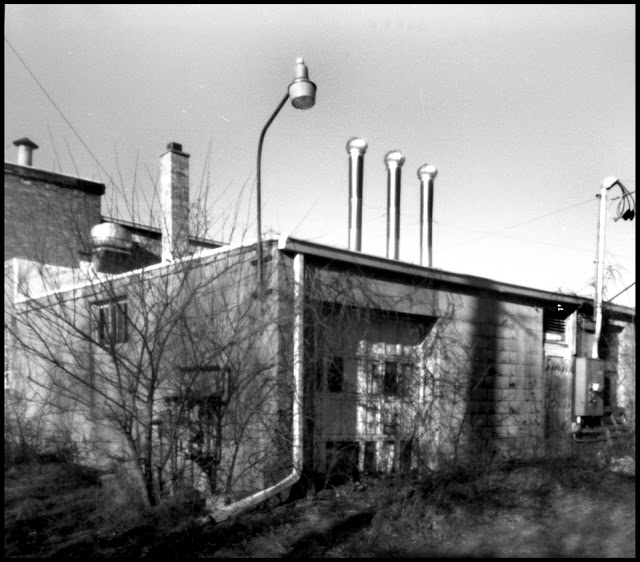 A small garage building with several clients of the gas company. 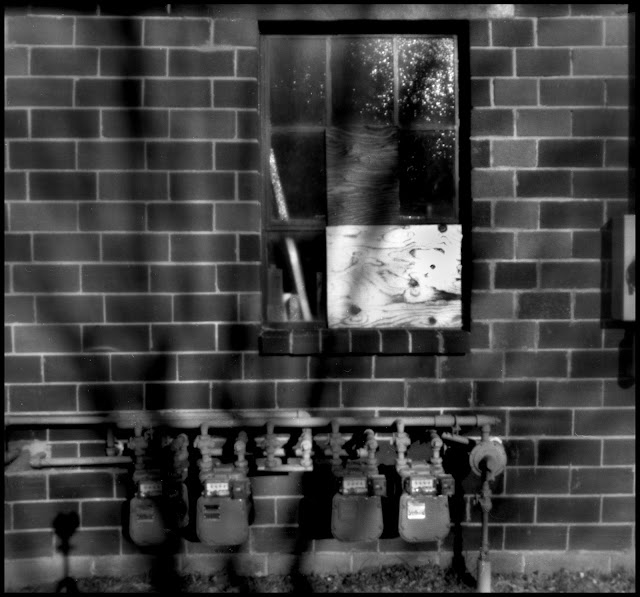 A yellow arrow pointing down an alley at nothing I could see down there. 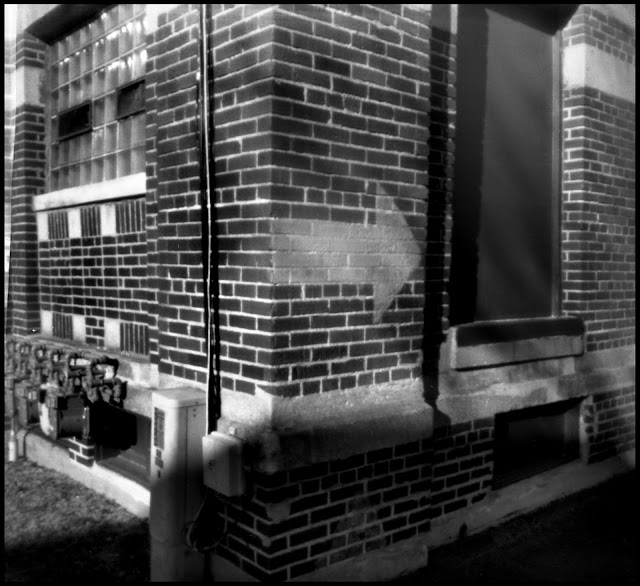 I normally present photos in the chronologic order they were taken but this time they're in reverse order because I didn't want to lead with this. Everybody always talks about how all the little surprises make pinhole photography so charming, but not always. When winding the film it seemed a little tight but not worse than I've encountered before. I always unload the camera in the darkroom to avoid any possibility of a "fat roll" fogging the edges. When I went to load the film on the developing reel, I discovered that it had caught on something and had actually torn the film in several places. If the take up reel isn't parallel to the supply, it will bind up and usually just won't advance any more. I've had it crumple the backing paper, but I'd never seen it tear film like this. Only the first four frames were affected and then somehow the film straightened out for the rest of the roll. It took me about twenty minutes in the dark to get it loaded on the developing reel.
I was sorely tempted to retouch the damage as well as possible but out of some sense of authenticity I left them visible. These damaged frames wouldn't stay flat in the scanner film holder, but I could sandwich them in the glass negative carrier from my 1940's Federal enlarger and capture them with the Nikon D750.
The back door of the gothic revival St. John's Lutheran church. Only a slight tear on this one. 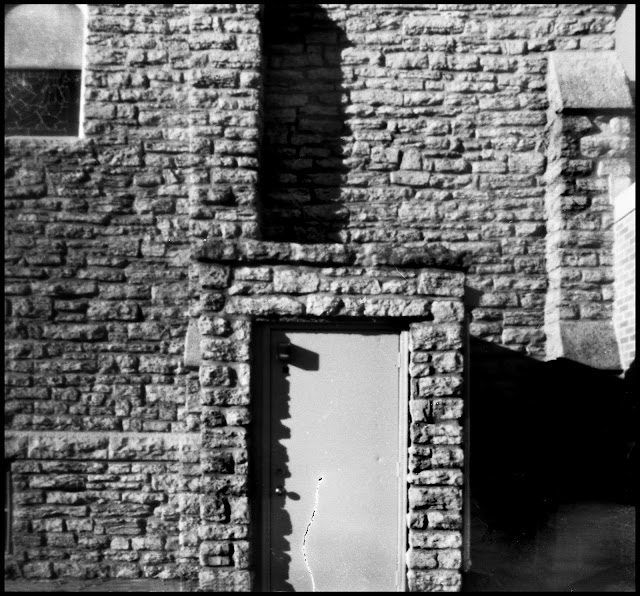 A modern rear entrance just beside it on the back of church. I had composed it loosely enough that I could just crop out the damage. 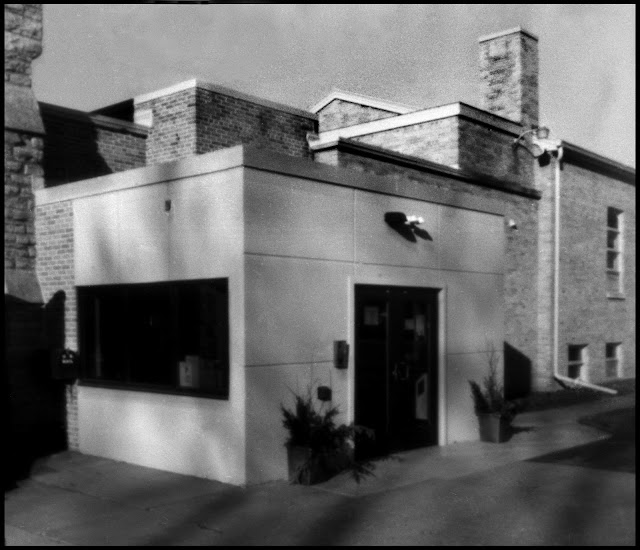 An old carpet factory near our house has been converted to apartments with a large sunny meeting room on one end. Apparently the damage to the film occured after the exposure. I'm kind of surprised that these bent flaps of film got developed without sticking to something, I couldn't really get them into the reel but they just wrapped around the edge against the inside of the tank. 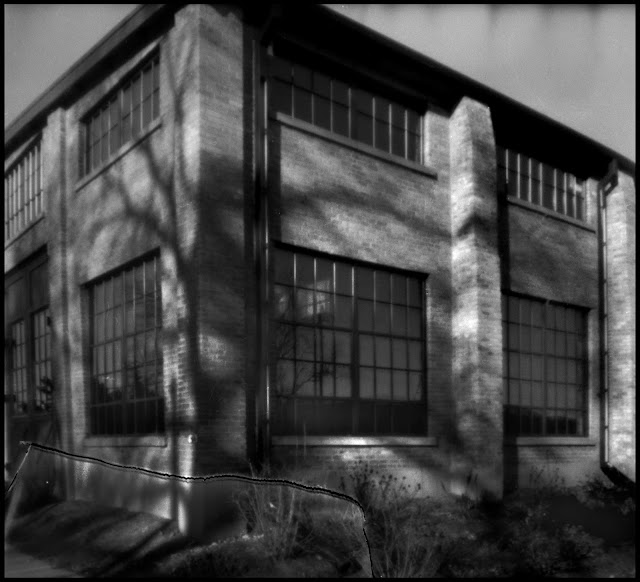 The first frame was the only place that a piece of film actually broke off. It kind of goes with my shadow. 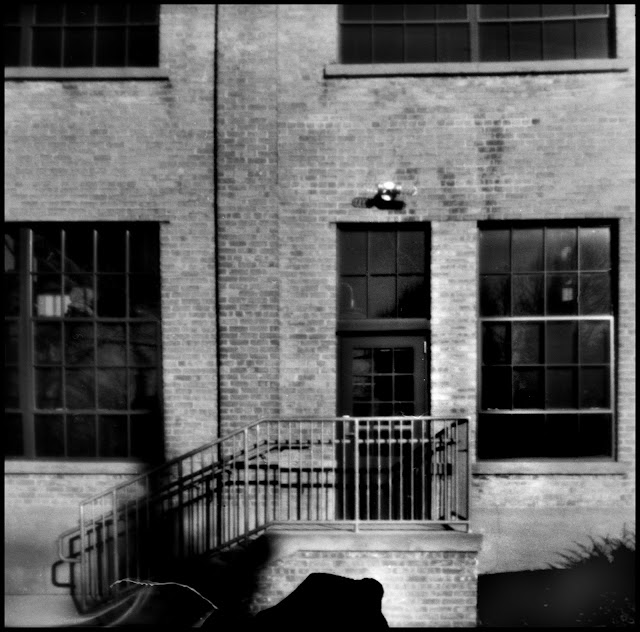 Posted by Nick Dvoracek at 4:18 PM