Again with the Random Acts of Color and Lunography

In what I hope isn't becoming a pattern, I loaded the Tenth Anniversary iPhone Box Camera with Ektar 100 and took it along on our latest trip to Massachusets. I was too obsessed with using up 36 exposure rolls in my little Populists and it stayed in my backpack.

We left the colorful ghost peppers on the vine as long as we could. Sarah put them in a steel bowl on the kitchen table that was too much like Edward Weston's famous setup for me to resist. 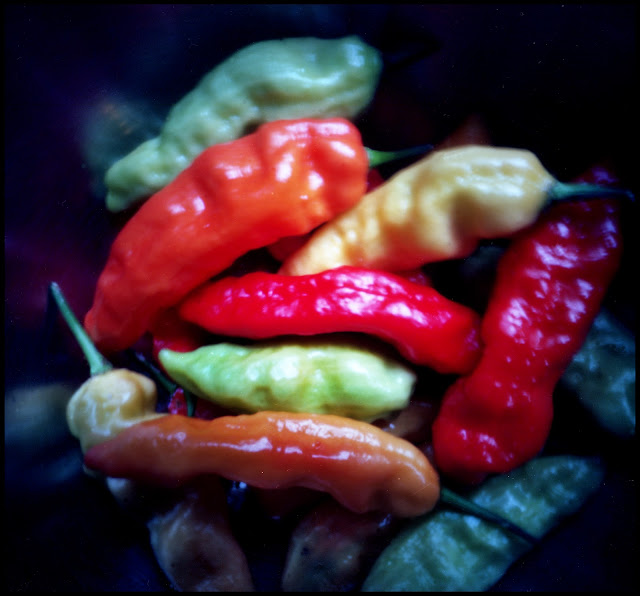 An irresistable sunbeam illuminating the little pumpkins and the tomatoes we had picked green which had been in a paper bag with an apple for weeks to mature. 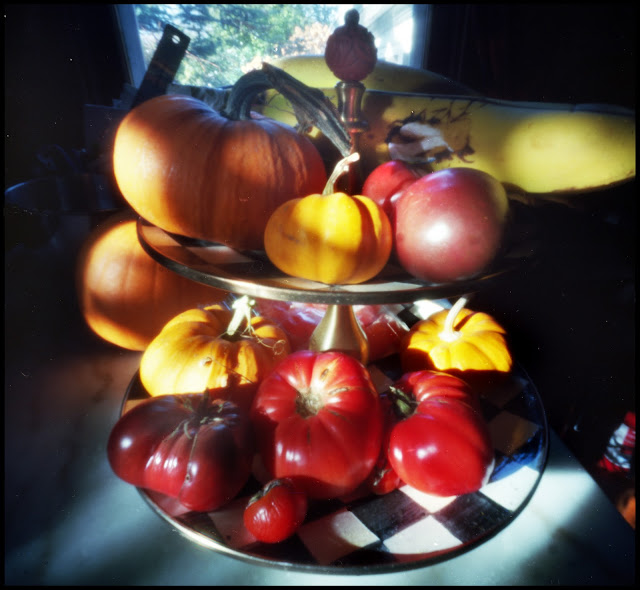 I went to Appleton to pick up the prints and negatives from Murray Photo and to check out the cardboard window shades I had made in order to turn the classroom at the Trout Museum into a camera obscura. It's located on Houdini Plaza where the Oneida Street Bridge crosses the Fox River and intersects with College Avenue. In the classes I'm teaching next summer, this is the environment they will have to take pictures in. Normally a wide angle camera like this will provide views of tall buildings with distinctly converging verticals. This one was taken from the second level of the parking structure across the street so the camera was almost level. The classroom I'll be using is on the top floor of the smaller building in the center of the image. 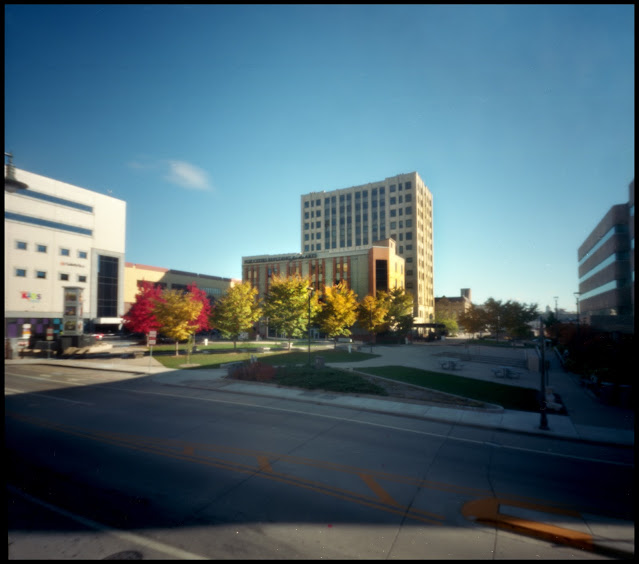 From ground level, the view is what you might expect from a wide-angle pinhole camera. One of the assigments I'm thinking of giving for this class is a building. I've debated whether I want to have them make a camera with a rising pinhole. I'm concerned that would take up too much time. Since they will be making cameras of different distances to the pinhole it might be instructive for them to see how this convergence changes with angle of view. I'm also thinking of assigning them a specific building so they don't all take the exact same picture. Incidentally these individual assignments and the angle of view of the camera they make will be assigned by drawing lots. If assignments like this seems like limiting the creativity of the children, if you're a sports enthusiast, think of these as fundamentals drills and if you're a musician, as etudes. 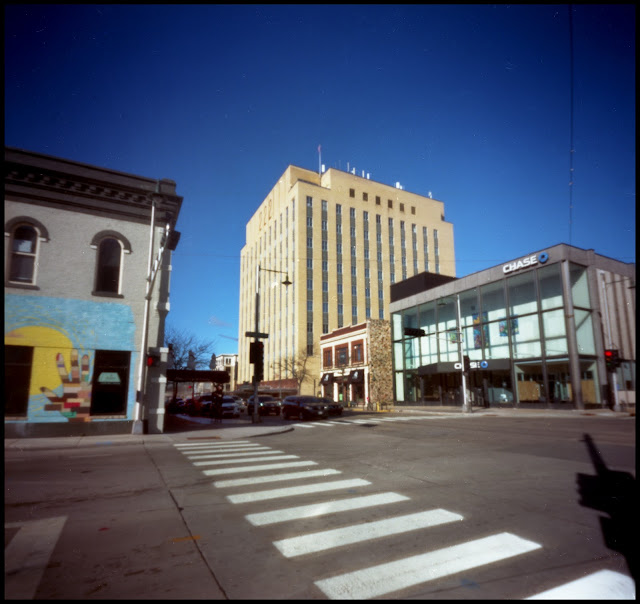 Another assigment I was considering is an abstract composition of light and shadow. Think that's too sophisticated an idea for an 11-17 year old population? Now I'm curious to see what they'd do with such a nebulous concept. In early November it was hard to keep the low mid-morning sun out of the image. Most of the direct sun is hidden here but it really blows out the corner of the left-hand building where it's reflected off the windows. The sun will be much higher in the sky next summer. 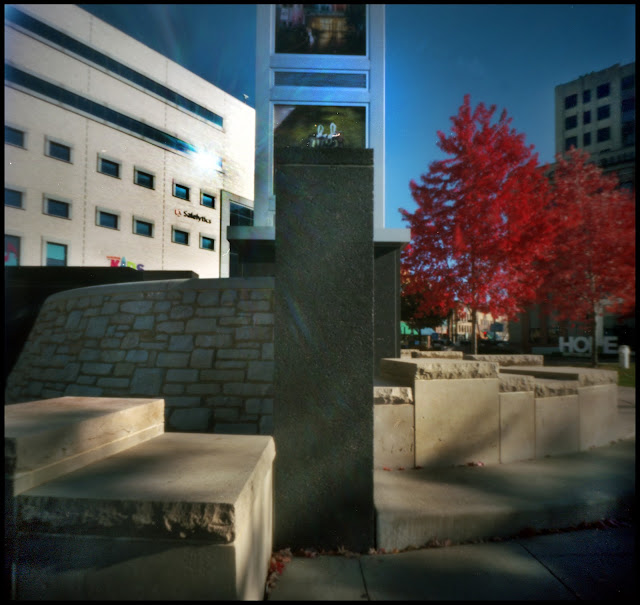 There was a very deep partial lunar eclipse during all this. I was curious if that tiny bit of illuminated satellite would still be so overexposed you couldn't tell the difference. It was completely overcast all day but about 8 pm it suddenly got perfectly clear for the 10 hour exposure. It looks a lot like a total eclipse except instead of the famous redness of the shadowed moon, it seems a little bluer than usual during maximum eclipse. Jupiter at magnitude -2.5 must have passed through the scene as well, but left no trail I can see, 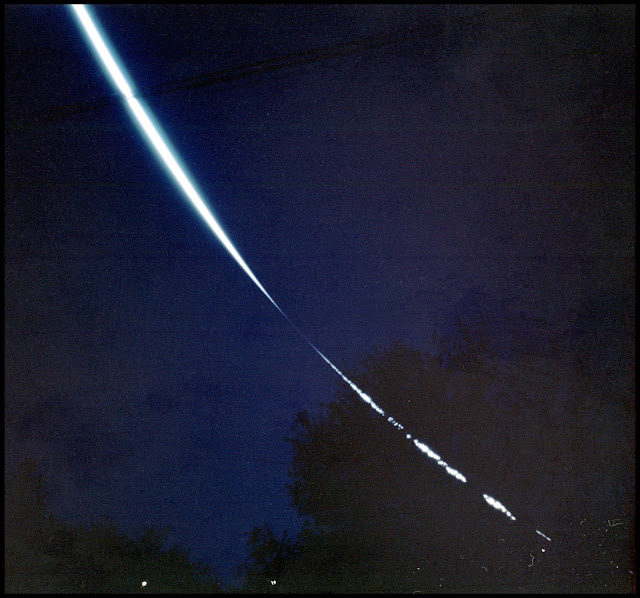 One morning the sunbeams called to me. 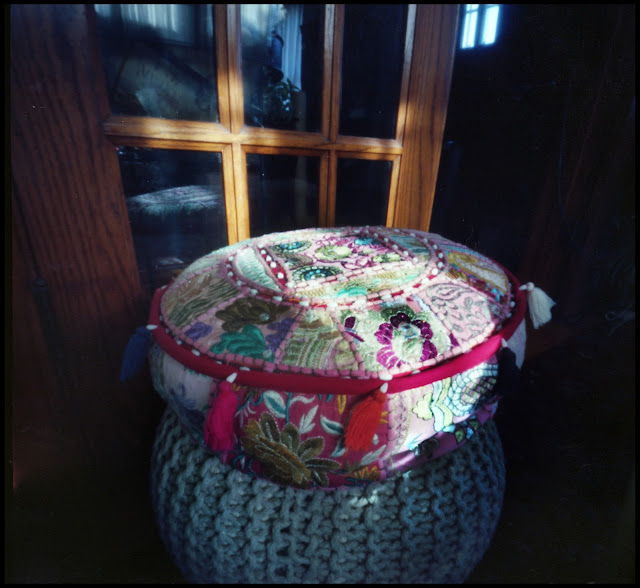 A sunbeam filtered through the sheer curtains onto the fern and Wisconsin lamp above Buddha's corner. 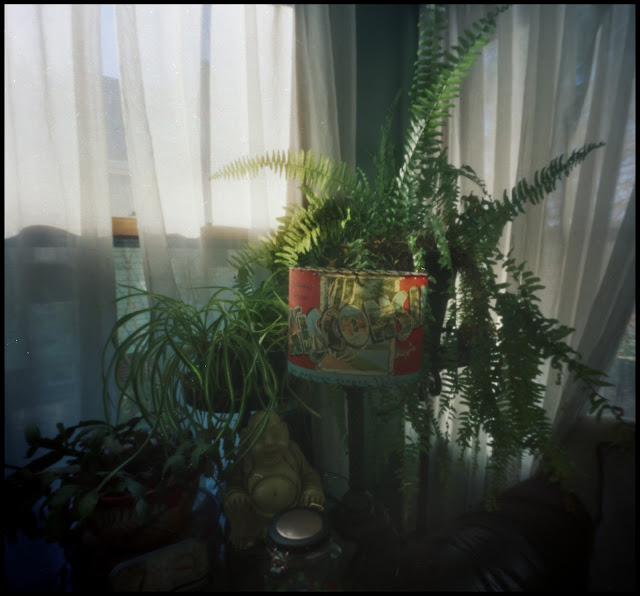 In case anyone thought I was just making a musical reference in my October footograph,  I really do wear blue suede shoes. 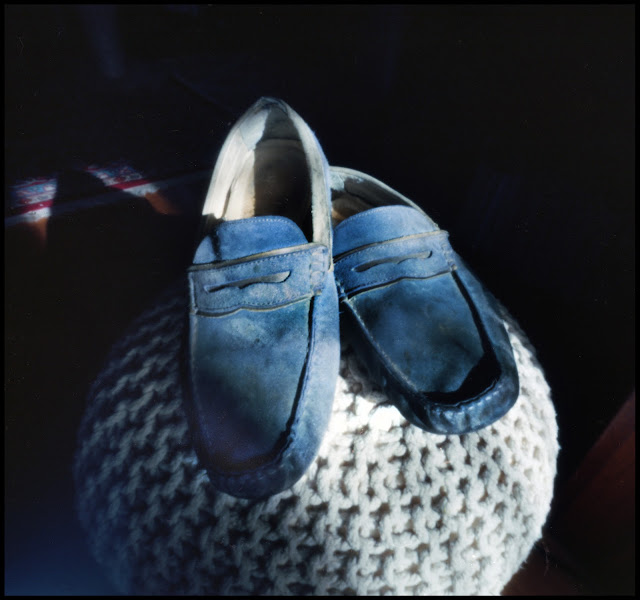 We've been in a somewhat confusing but creative transition between Halloween, Thanksgiving and Yuletide decorating. The tree in the sunroom led the festive season. 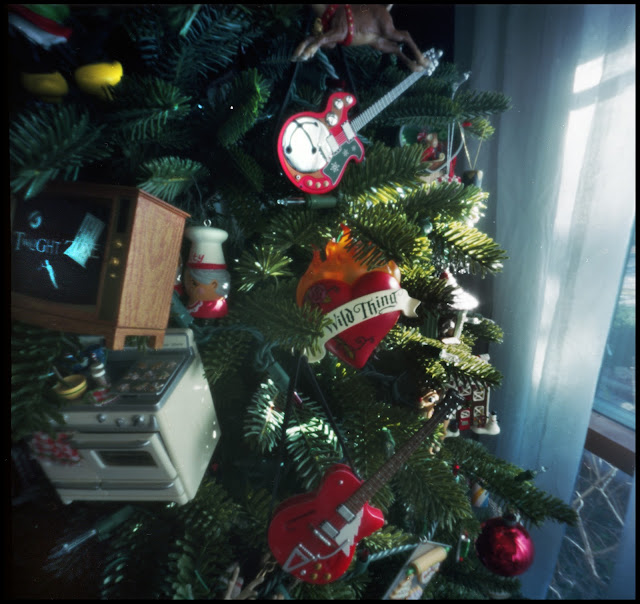 The Tenth Anniversary iPhone Box Camera has a .26mm hand-drilled pinhole 36mm from a 6x6cm frame.
Posted by Nick Dvoracek at 11:06 AM