Early in the millenium, we got rid of the freezer in my department which held photo sensitive materials -  most of it with expiration dates in the late 80's, about when desktop publishing replaced the darkroom. It broke my heart to throw away a mountain of Photo Mechanical Transfer paper. I gave away about 40 rolls of Panatomic-X to the Art Department but they weren't interested in an unopened box of 100 sheets of 4x5 Plus-X that had expired in 1981. It's been sitting in my basement darkroom ever since.
I must have had some intention of using it at that time because I bought a Yankee Cut-Film Daylight Developing tank. Something else grabbed my fancy, and I never did anything with it.
Since I retired and became a full-time pinhole photographer, that box of Plus-X has been calling to me. It's what got me to build the 4x5 Pinhole Lab Camera about a year ago.

Shortly after I built it, I exposed 12 sheets of the Plus-X and tried to stand develop it in Caffenol in the Yankee tank.  If you've ever read reviews of that Yankee tank, it's often recommended that the best way to use it is to fill it with cement and make a boat anchor out of it. It's nearly impossible to tell if you've got the film loaded one to a slot on both sides of the tank and any agitation sloshes developer all over. All of the sheets were stuck to each other. I think this also might have been the first time I had problems with gaps in the sleeves of the changing bag. What did get developed looked extremely dense.
It seemed best to get some experience with film and developer I knew was good. I bought some Arista.edu 400 and intended to stand-develop it in Rodinal in a tray. I was pretty sure I could get in and out of the darkroom in the far corner of the basement at night without letting any light in. For some reason I never got up the nerve to try it.
Early in October I went to Appleton to meet with the Education Coordinator at the Trout Museum about my ideas for a summer class. Since it was a critical part of my plan, I first went to talk to the owner of Murray Photo, across the street from the Museum, who runs the only lab left in the Fox Valley. Although we had already corresponded by email about next day processing specially for my group, it seemed like a good idea to make a personal relationship. Murray Photo is also a major dealer in used film equipment. Our conversation took place among a display of monorail view cameras and Omega enlargers and I found myself asking: "You wouldn't happen to have any hangers and tanks, would you?" It turned out that someone had recently brought in five tanks, three with floating lids, and nine hangers. They wanted $75 for it. I had to rush back to my car so I didn't show up for lunch with a big box of darkroom gear, portrayed here at 3 inches with the Arista 400. 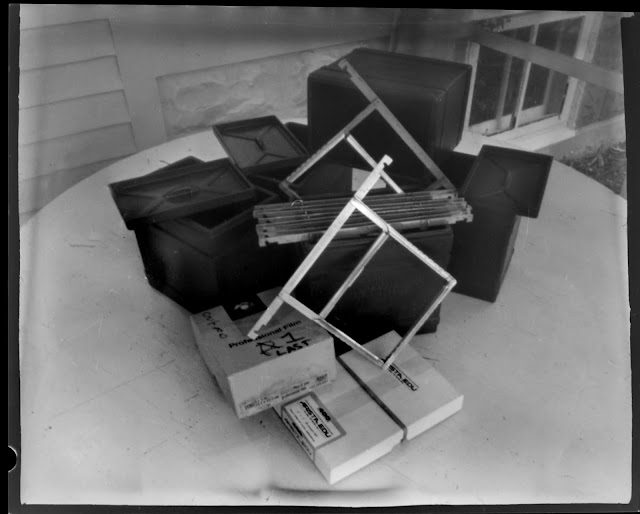 Our two-car garage was the subject of my first exposure using the Arista, with the image plane at four and a half inches. Two black Mustangs on a cloudy day in a white garage would be a good test. This is the whole negative with the imprint of my cardboard film holder on the edges. I wonder if I can get that strip at the top of the holder (the bottom of the negative) straight? I have to remember that when that fixed-rise upper pinhole is needed to keep the parallels vertical, I can always lower the tripod a little to avoid cropping the bottom too tight.. 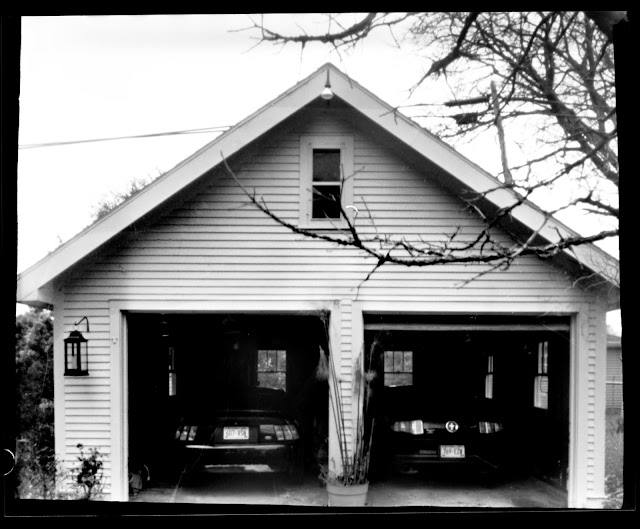 My second exposure was with the Plus-X, still at four and half inches. It looks perfectly fine. 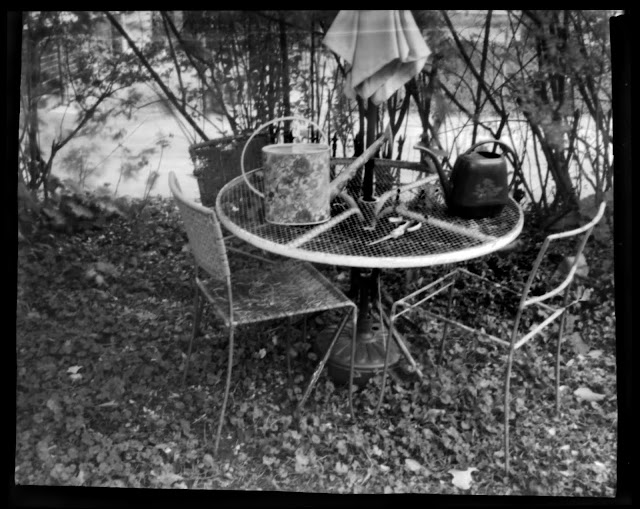 At three inches, the leaves and needles frozen into Elwood's Pond for another test of the Plus-X. 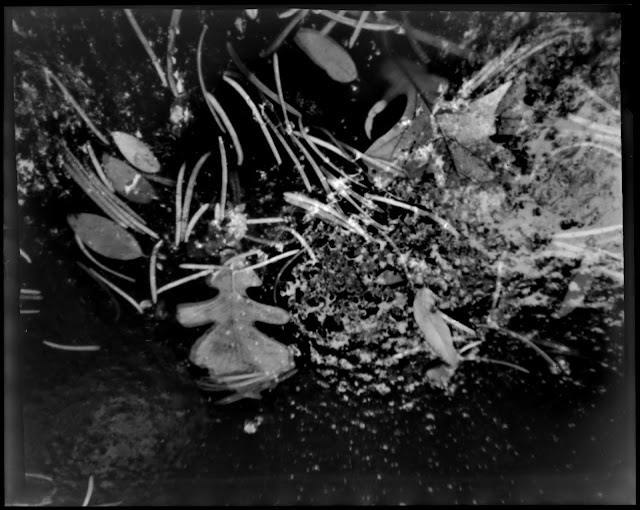 With the image plane at six inches, at f333, I used the Arista 400 for this two hour exposure of the ivy on the foundation of the house. 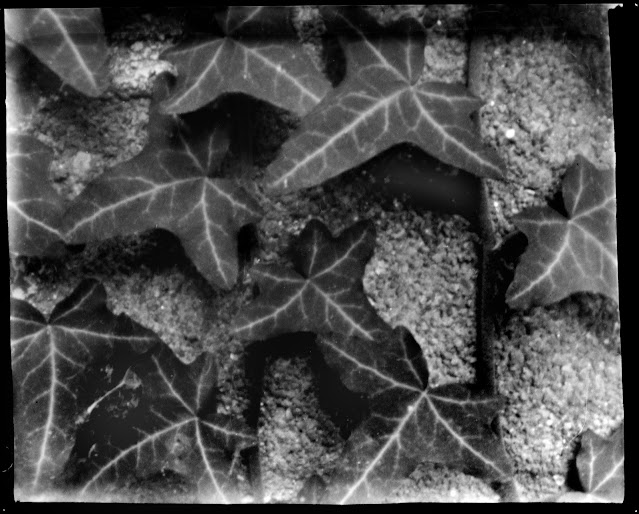 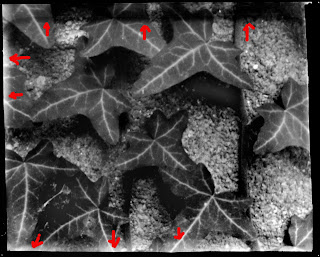 This is the first time I've developed 4x5 film in hangers and tanks since 1975. You may have noticed some unwanted artifacts at the top and sides of these photographs. It varies in intensity. This one is the worst. In some it looks almost like a scum line, but it's actually in the negative. I don't think it's a light leak in the camera or in the darkroom because it's the same shape on all of them and on both the Plus-X and the Arista.
These were presoaked and semi-stand developed in Rodinal 1:100 for an hour. These tanks take two liters of chemistry! I'm very sure the film was completely submerged. I agitated for the first 30 seconds, and then two dips at a half hour.
Is it possible that these result from the film resting against the hanger during development? I probably should try regular development with agitation at 30 second intervals.
If any of you Lords of Large Format out there have any wisdom about this, please let me know.
Of course I can always crop these flaws out. At an inch and a half, the tableau on the dining room dresser. 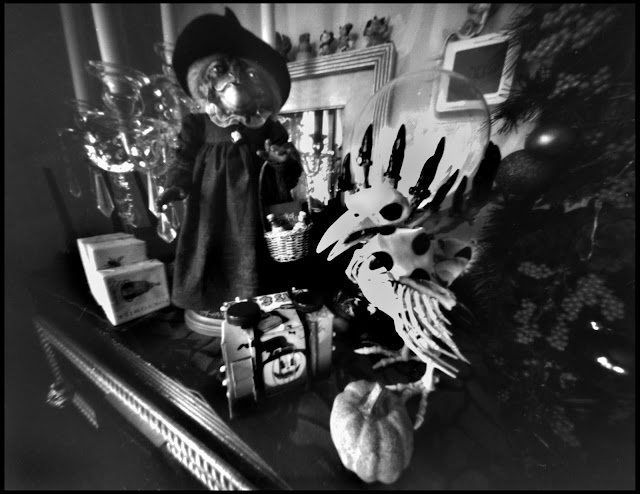 Sharp eyed viewers may have noticed a Spooky Cube at the bottom of that composition. You can read about it here, and see pictures done with it here.
That left the problem of how to get a positive of a 4x5 film negative. My Epson 550 scanner only goes to 6cm wide. Over a year ago, I briefly was having trouble with it talking to my vintage computer. I bought a backlight and some diopters for my "macro" 28-200mm Tamron to use Sarah's Nikon D750 to capture my negatives. Even with the diopters this set-up barely got down to fill the frame with the 6cm negatives. It was pretty clumsy to use - the tightest macro was at the longest zoom. The scanner problem was resolved quickly and I lost interest in using the camera to capture negatives.
During the last year, anticipating the 4x5s, I occasionally would browse the internet for a used Micro-Nikkor. It didn't matter how old it was since I was going to use it on Manual anyway. Last month I found this 55mm f3.5 modified to auto-index for $44 from Roberts Camera, with free shipping. 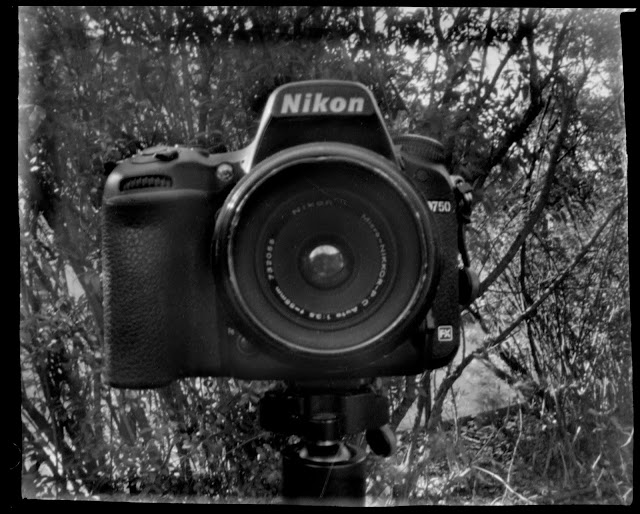 I took a few exposures when it arrived to make sure it worked. I no longer had an excuse to put off trying the film. When I had the negatives, I lined everything up using Live view on the camera's screen to align it and adjust the exposure. When I hit the shutter everything went black. The camera had been in a low battery state and I thought that was the problem. After 24 hours charging, I tried again and the display showed "Err." Putting the new electronic lens back on didn't change anything. Very frustrated, I jumped on my bike to Camera Casino where I was sure they would show sympathy for the pinhole photographer and show me what stupid thing I'd done with the D750. They had no idea what it was. Their Nikon technical specialist wouldn't be in for a few days and if he couldn't figure it out, it would go off to Nikon.
Later that afternoon, I tried to capture the 4x5's with my iPhone SE and with Sarahs iPhone 10. Both made pretty good images, but had a funny quality at full resolution. In frustration I sought solace on YouTube. It turns out that with a non-electronic lens with the camera in Live view, the camera gets confused about where the mirror is and goes into the error state. The solution is to trip the shutter again, and then everything works. Unbelievably, we hadn't tried that.
I brought it home and tried again, using the optical viewfinder. That wouldn't give me a preview of changes to exposure, but I just used the meter and did some bracketing to get what looked like a proper image of the negative. Five minutes later I was ready to edit my seven negatives. I'm still learning how to expose that negative for a best positive (the D750 doesn't have an inverse effect), but I'm pretty happy with the results.
The charm of this format is starting to sink in, especially now that I know I have about 130 sheets of film. I'm going to see if the Pinhole Lab Camera can teach me more lessons.

Posted by Nick Dvoracek at 5:43 PM