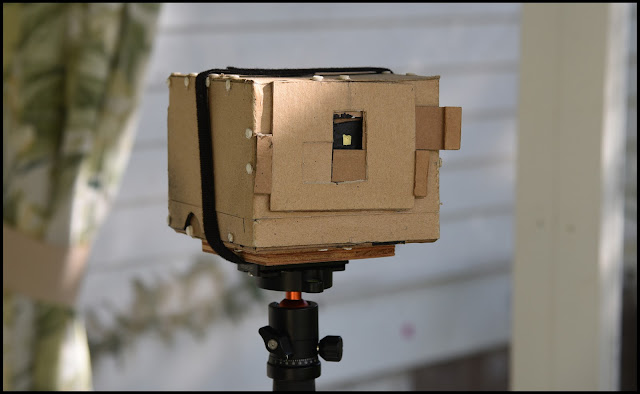 The next project with the double-sided adhesive and the self-adhesive labels was the big guy, the 4x5 Pinhole Lab Camera, with the latest corrections to the template. This camera is supposed to be all about learning and it did not disappoint.

It has slots in the interior so you can change the angle of view and the pinholes - under light-safe conditions for your light-sensitive material i.e. a darkroom or a changing bag. It has three pinholes for rising and falling front capabilities in both the horizontal and vertical orientations. 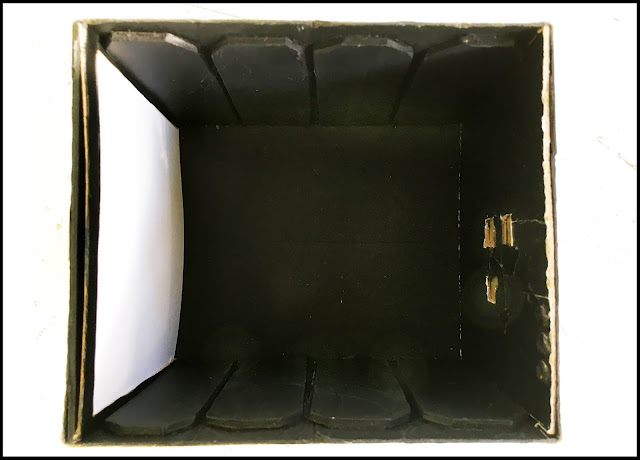 The main change was to the shutter. In the last iteration, at the shortest distance to pinhole, the shutter got in the way of the edges of the image. I changed the distance between the pinholes from 15mm to 20mm and enlarged the openings. As you'll see below, that seems to have worked. Notice how wonderfully straight that new shutter is on the box.

I made two near-fatal mistakes in making it. Cutting out the top box, instead of cutting between the side and the side flap, I almost cut off the flap. I caught myself before it was completely severed. I repaired it with three layers of opaque tape and proceeded normally. It left an unsightly gap in the corner so I glued in a narrow strip of card to fill it. 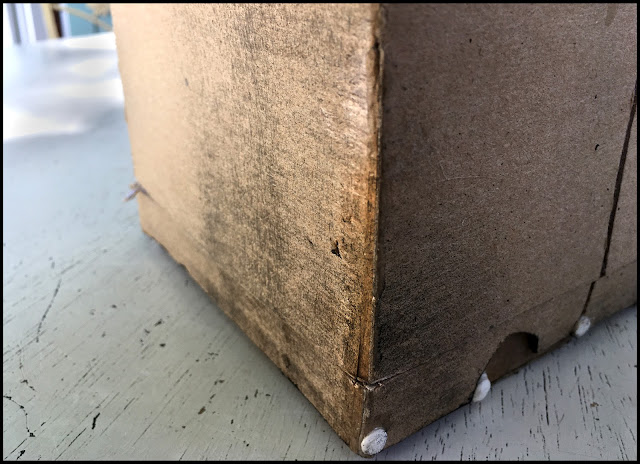 When I made the top, with it formed over the bottom for the best fit, I was so focused on that damaged corner, I didn't notice that the holes for the pinholes were on opposite sides. No big deal, right? When I just opened it and reversed the top, I discovered that it was very slightly trapezoidal and the outside front was just a smidge narrower than the bottom. It would slide over it but it caused the inside to bow in, including moving the pinholes farther back. I cut a narrow triangle out of the front of the inside box so it fit correctly without distorting it. 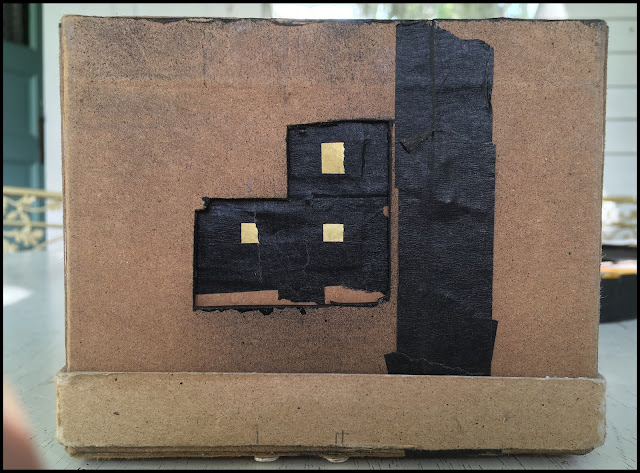 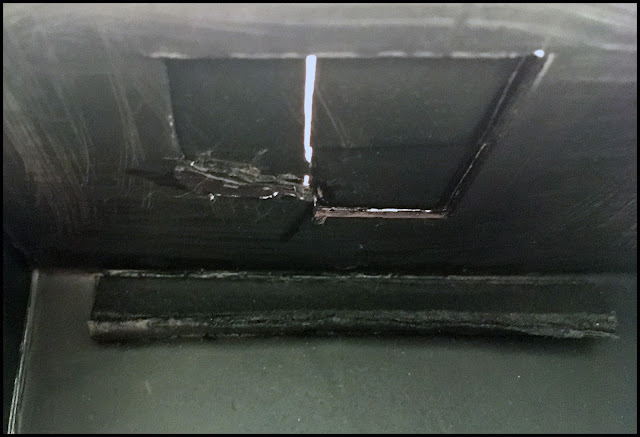 The top and the bottom are only the template and one layer of the cardstock so to make it more opaque on those sides, I added a second layer of the cardstock. I don't know if that was enough which I'll explain in a minute.
For finders, I punched little circles out of a double layer of white cardstock with double stick carpet tape on the bottom. This sort of cardstock has a tendency to delaminate, so they're covered with a layer of glue. Since the camera might be used in any orientation, they're on all four sides. 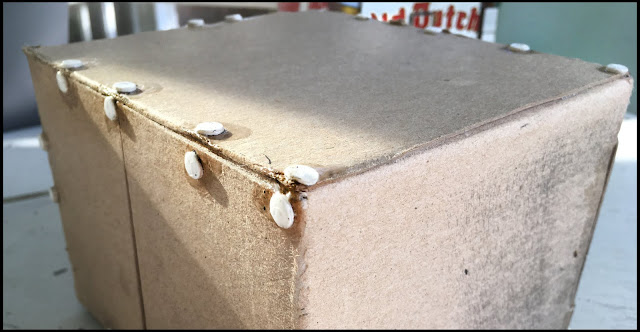 I made three sets of pinholes at .27mm, .36mm, and .45mm, sizes near optimal for the first three slots. I just decided to use the .45s for the six inch distance. That makes working with these about f150 at the one and a half inch slot, f200 for the three inch, f250 for the four and a half inch, and f333 at the back of the camera at six inches. There are bumps on the top inside-facing side of the mounts so I could tell which was which in the changing bag. Of course you can use any size pinhole at any distance if you're not concerned about optimal diffraction. 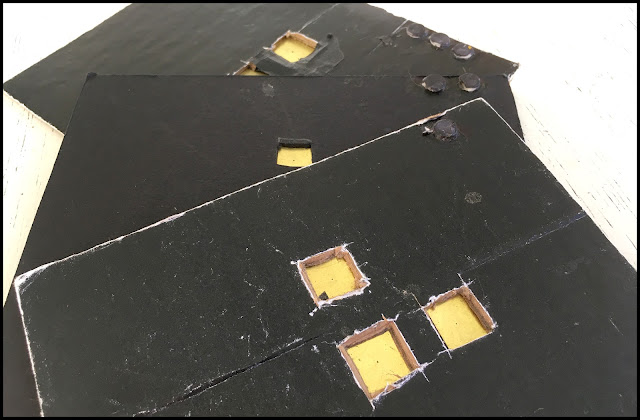 To make it easier to change the paper and keep it flat at the image plane, I made a little frame so I could slide the paper in rather than taping it. That works very well. I made it to accomodate sheets of film (?!) which are just narrower than 5 inches so I had to trim each sheet to the right width. 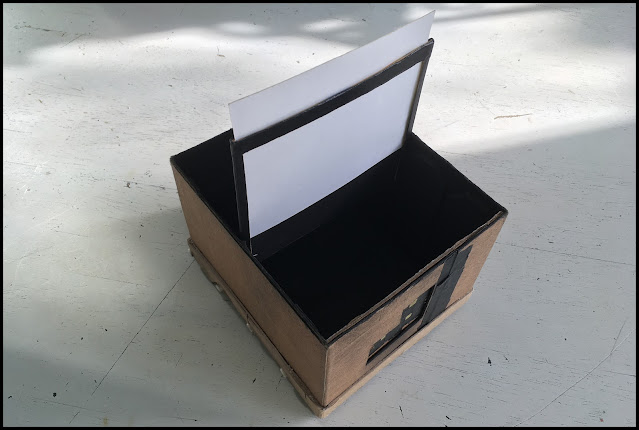 The outside box has thumbholes so you can get a grip on the inside box but it would be easier if you could just grasp the whole box. I cut off the bottom inch that extends below the shutter and glued it to the inside box. That also reduced the amount of movement you need to make inside the changing bag, which as it turns out is a critical specification.

It has no tripod mount since it's intended to be used in any orientation and unscrewing it from the tripod every time to reload would be a hassle. I had been attaching the camera to a platform on the tripod with rubber bands. As you know if you ever shot one across a classroom, they can get away from you, possibly damage the camera and even accidentally open the shutter. On one of our Halloween hunting adventures, I bought some Velcro fastener straps. With a strip of that held to the platform by the quick-release adapter (one of these days I should staple it on), I could quickly and firmly-enough mount the camera on the tripod. It doesn't block my view of the viewfinders. That was a real improvement over the rubber bands. 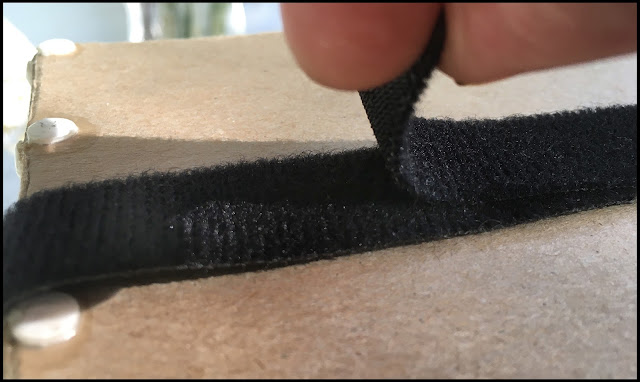 To contain my paper,  I've been using this box from letter sized Photo Mechanical Transfer receiver paper which I've painted with numerous coats of black Krylon on the inside. I kept losing track of the pinhole mounts in the changing bag, so I taped an envelope on top the box for them. 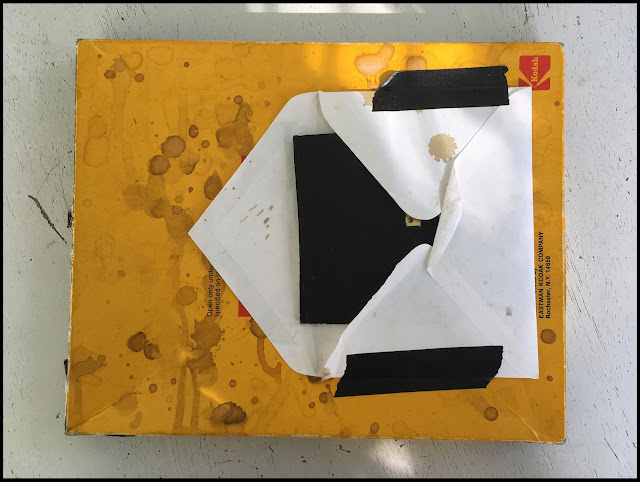 I put the sheets of paper in some old envelopes to protect them a bit, with the emulsion side always facing up. I have a sheet of black cardstock just smaller than the box inside. Fresh sheets are on top, exposed are on the bottom. 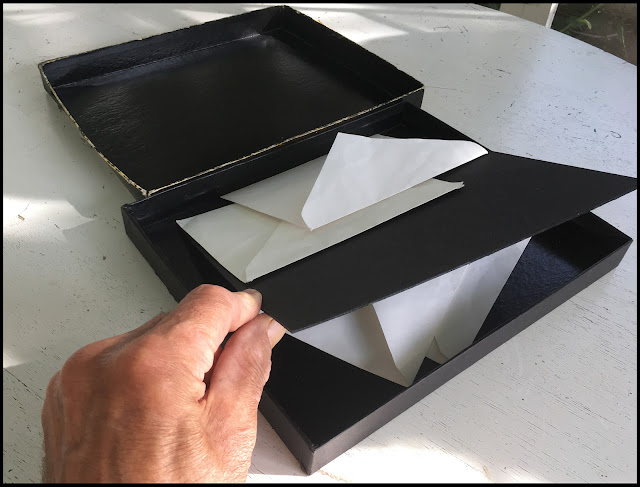 It turns out it's kind of a tight fit in the changing bag.

Unbelievably overconfident, I set off to try it out at the County Park. Changing the paper, image plane and pinholes seemed to work pretty well. When they were developed, except for one, they were all very fogged!! After my experience with Little Guiness, I immediately suspected this cardstock to be less opaque. In kind of a knee-jerk reaction, I painted the inside with about six coats of flat black Krylon, After a few tests at home including a full day in the sun, it looked like the light-tightness of this camera could be trusted.

Out to the County Park again, and yet again most of the images were fogged to some extent! I now realize that while wiggling around inside the changing bag, the sleeves kind of drooped down to my elbows and allowed some light in to ruin my negatives. I kind of became aware of this in that second field test. I did some more exposures at home changing in the darkroom and those support my hypothesis,

I'm going to make a paper safe out of foamcore just big enough to hold my envelopes and Sarah has said she will help me make the sleeves elastic so they stay put on my biceps. Another realization was that the times I've had no trouble in the changing bag, I had a winter coat on which fits more tightly in the sleeve. Maybe just wait til winter.

So, other than all that drama, how's it work? Keep in mind this also required a lot of relearning about the response of paper. They're also developed in Caffenol so couldn't exactly be developed by inspection.

From the first outing in the County Park.

At an inch an a half, the latest version of a playground merry-go-round. It's alway odd to see these ultra-wide angle images when you know where the camera actually was. I don't think I was two feet away from it. This is with the on-axis pinhole. Looks like the whole image area is lit up. 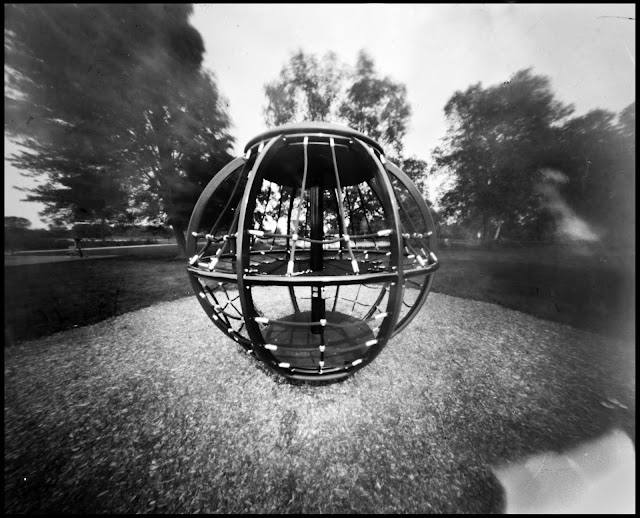 From the tests around the house.

At one and a half inches, on-axis at my new computer. 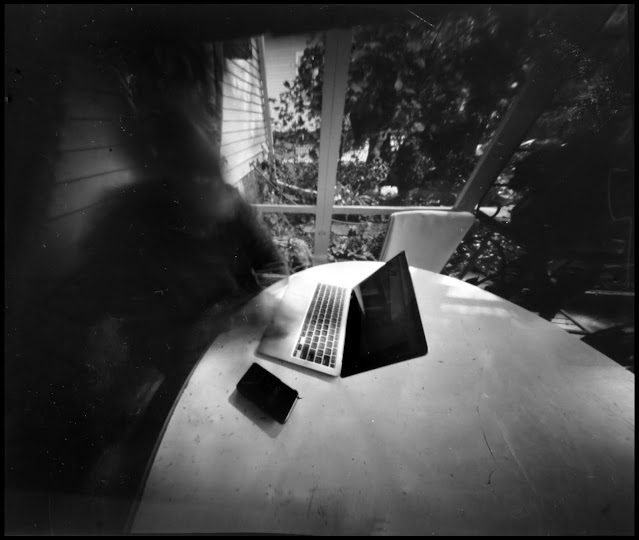 I wanted to know if the shutter got in the way at an inch and a half with the rising front. I figured the bright sky at the top would compensate for the extreme vignetting at this angle. Again no obstruction. 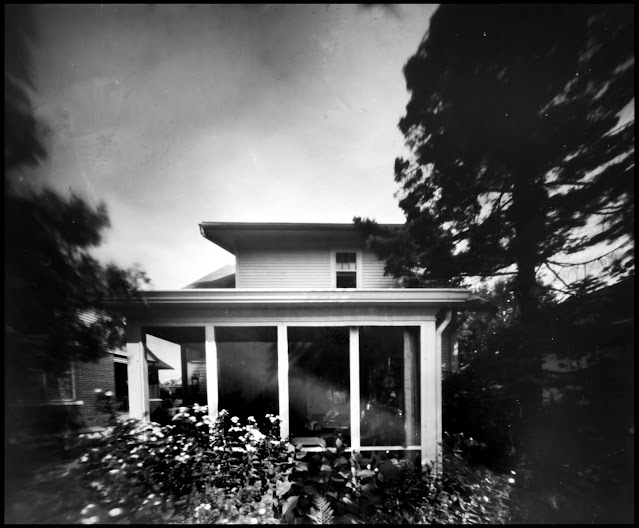 How about the rising front in the vertical orientation at an inch and a half. This time I chose the north side of the house to get an accurate assessment of the vignetting. There's some hope of getting a full frame image with a properly exposed negative but when you're underexposed to start with, the edges are hopeless. This does illustrate how the center of illumination shifts with the rising front. 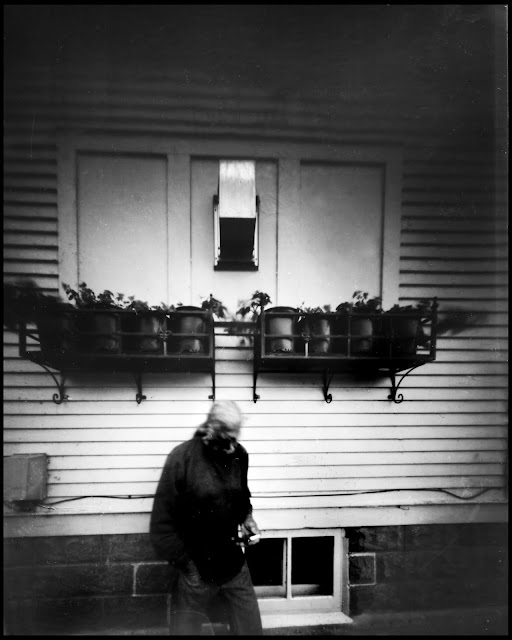 From the second trip to the County Park.
The third base bleachers at the north softball field. This was about when I realized about the problem with the sleeves. With the on-axis pinhole at four and half inches. 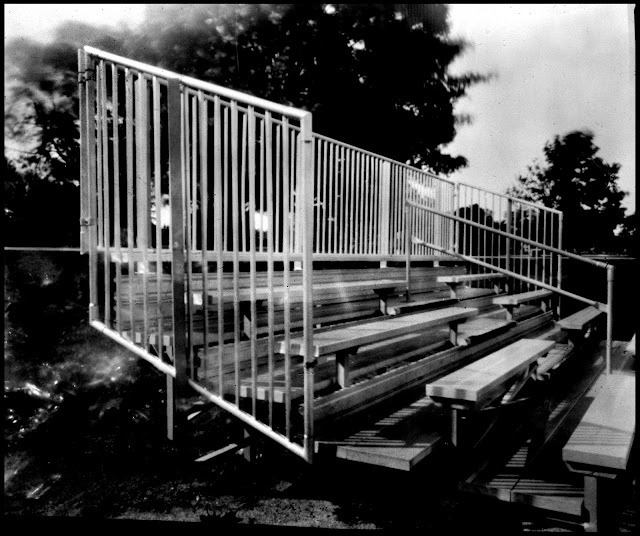 The previous changes took place at a picnic table in the full sun although with the sleeve openings opposite the sun. For the next shot, I made a point of using a bench in the shade. This ping-pong table with the steel net was done at three inches with the axial pinhole. 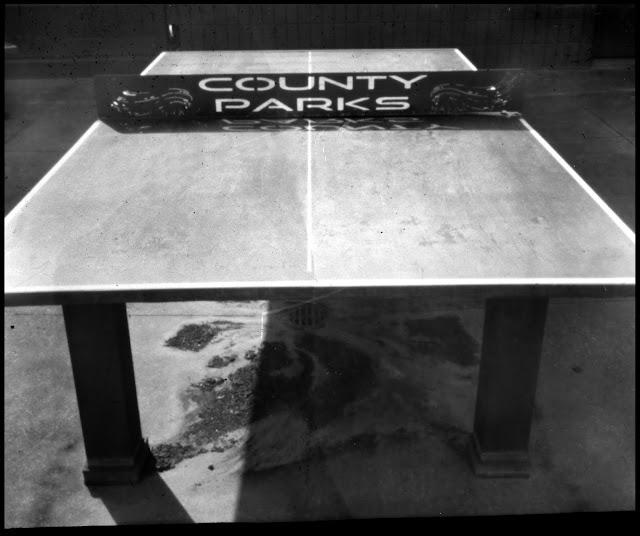 I thought the light poles around the pavilion made for a good test with the rising pinhole at four and a half inches. 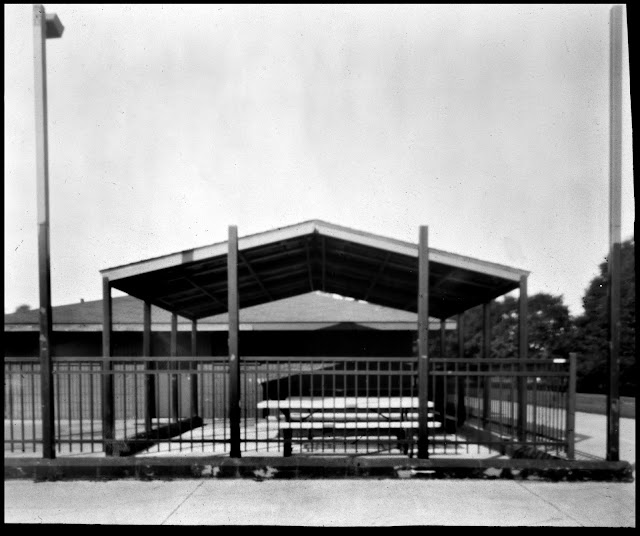 Back home, changing in the darkroom.
At f333 it's easy to underexpose an orange Jack-Be-Little pumpkin underneath a lot of foliage. The axial pinhole at six inches. 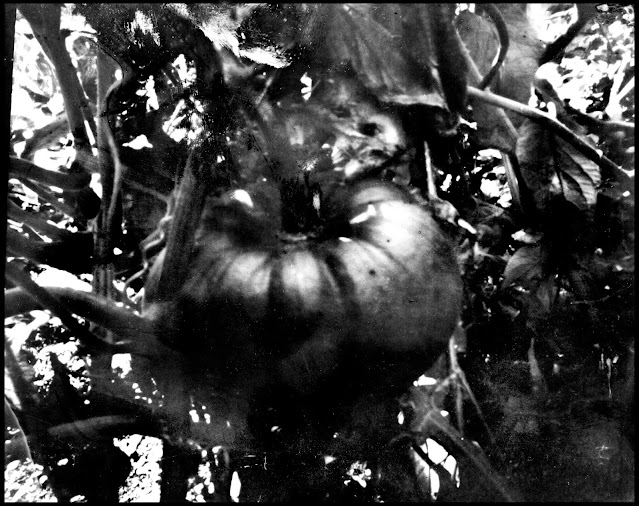 Another attempt at six inches. 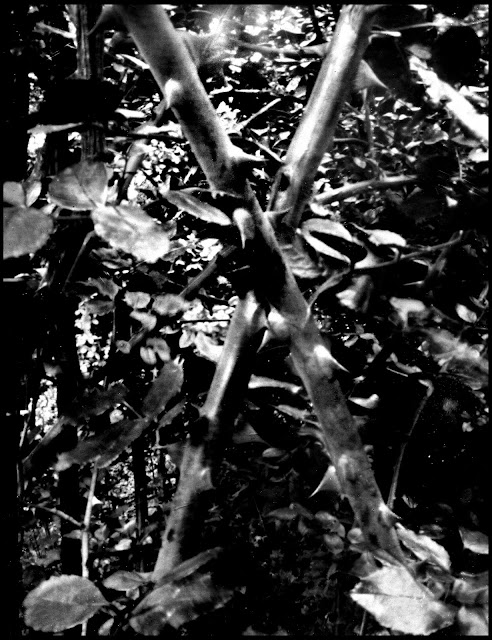 With the camera set at four and half inches I walked around the corner to get what appears to no longer be the Glad Tidings Tabernacle with the rising pinhole in the vertical format. 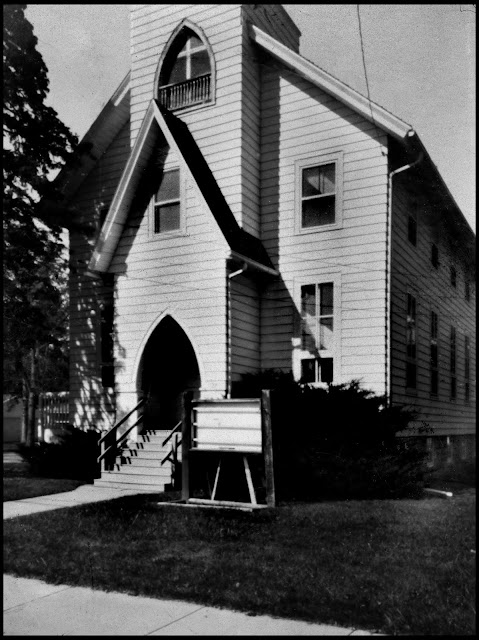 And again playing with the rising front at an inch and a half, I thought the sunshine on the white house and sky would overpower the vignetting. 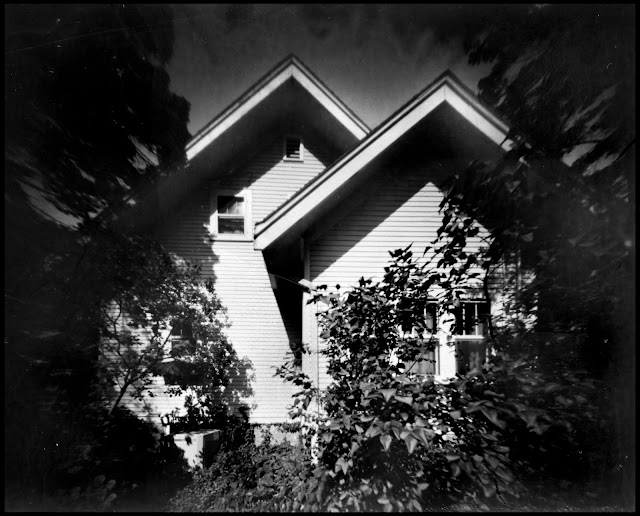 One of the justifications for large format is that you're more likely to take meticulous care with each negative. With one exception, all these scans are uncropped and unrotated. Looks like I came pretty close to framing things the way I wanted as well. Maybe I'm ready for the grown-up's light sensitive material.

Posted by Nick Dvoracek at 9:56 AM