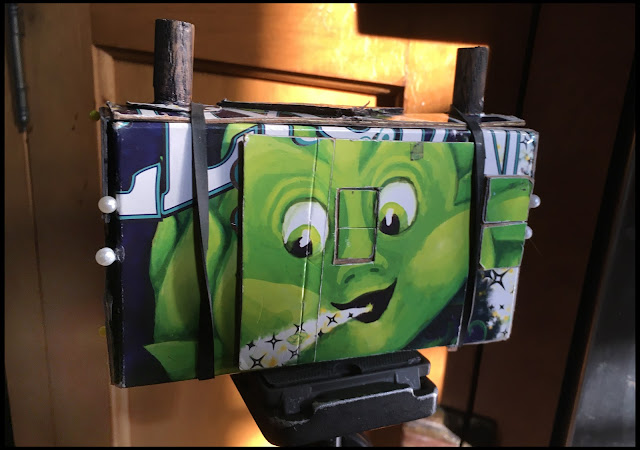 I shouldn't assume a camera is going to be weird just because it was made out of packaging for a product called Space Dust. In the first roll through it there was the issue of very difficult winding and the misplacement of the axial pinhole. I modified the film bay spacers and realigned the pinhole in the center of the shutter opening. This requires exposing another roll of film. I'm currently trying to gain experience with a variety of film stocks and bought a roll of Ilford FP4+ off the shelf at Camera Casino. Can you believe I've never used FP4+ before?
The weirdness continued with the most curvy film I've ever experienced. Why do I encounter something I've never experienced several times a year? The film was initially a little tight, but when out taking pictures, I advanced it with both hands at the same time on the tripod and thought I'd checked that it was taut.
On the inside it doesn't look like there's any reason the film shouldn't stay flat. 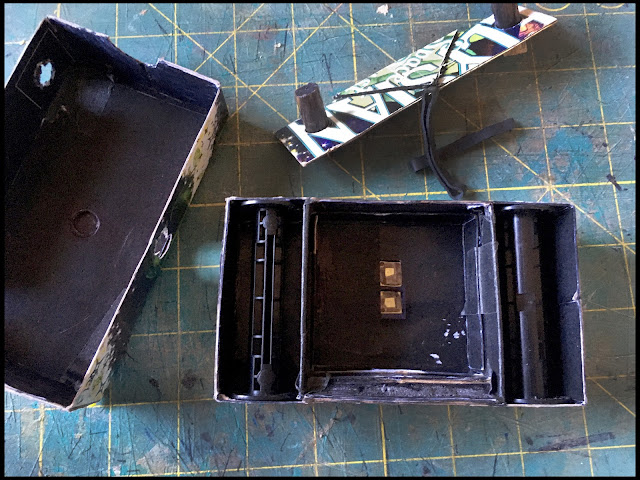 The first two frames had a light-leak streak down the middle of the film, again like nothing I've ever seen.

In order to make it quicker and easier to make the holes for the winders and shutters, I bought a couple hollow point punches and this rubber mallet. Any curvy film isn't immediately obvious but this is a round table so that upper right quadrant is a little weird. 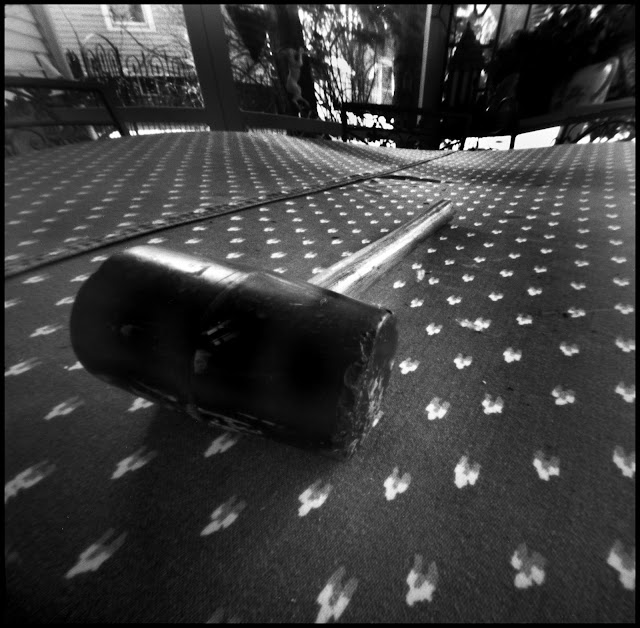 I snooped down the alley I had photographed a few weeks ago with the yellow arrow and found its partner at the other end. Should have realized it was indicating one-way. Pretty noticable waviness on this one. Makes that corner already sharpened by the ultra wide-angle look positively dangerous. 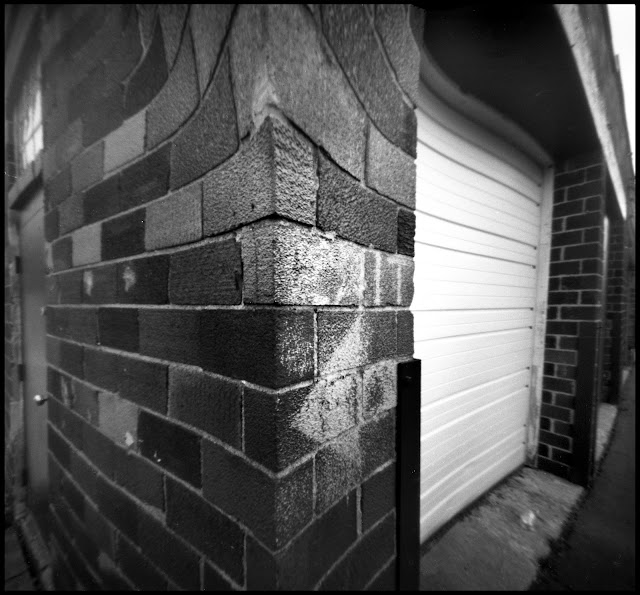 The camera was well behaved for the padlocked front of the former steam bakery. 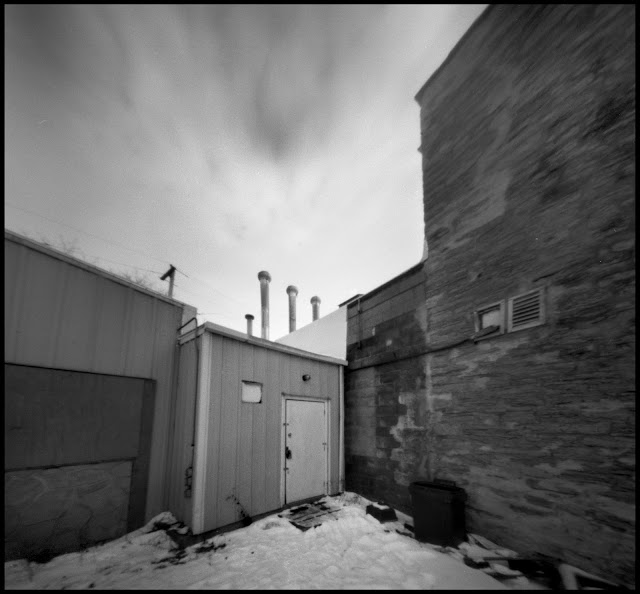 It's been awfully cold lately and I had to take advantage of a day in the low 30°'s F despite the sky being completely overcast. There was a forecast of a few periods of partly cloudy and I had to find something quick when the sun did come out for a bit. The main entrance of The Waters, originally The Yacht Club, looking a little pinched on the top of the portico and where the sidewalk meets the asphalt. 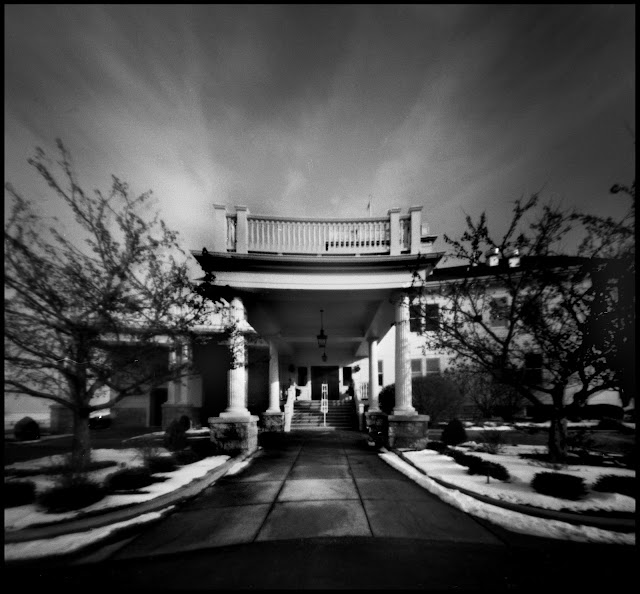 The side porch of The Waters. Most curved film planes exhibit barrel distortion so this pincushion effect from the film bowing outward can also be classified as weird. 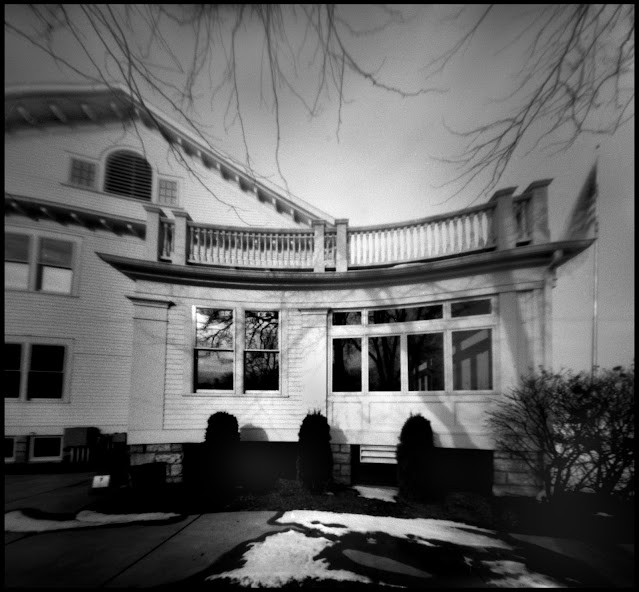 Trying to find something else while I had sunshine I noticed a red graphic of a bull in the diamond shaped window in this door. It's not as noticable in black and white but this picture has to win the curvy film championship. 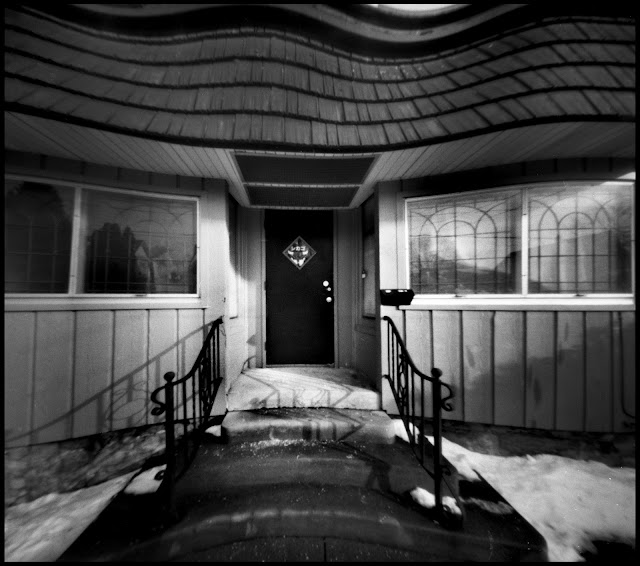 The Brio Building combining curvy film with the effects of a really wide angle using a rising front. For some reason this reminds me of a Stavkirke. 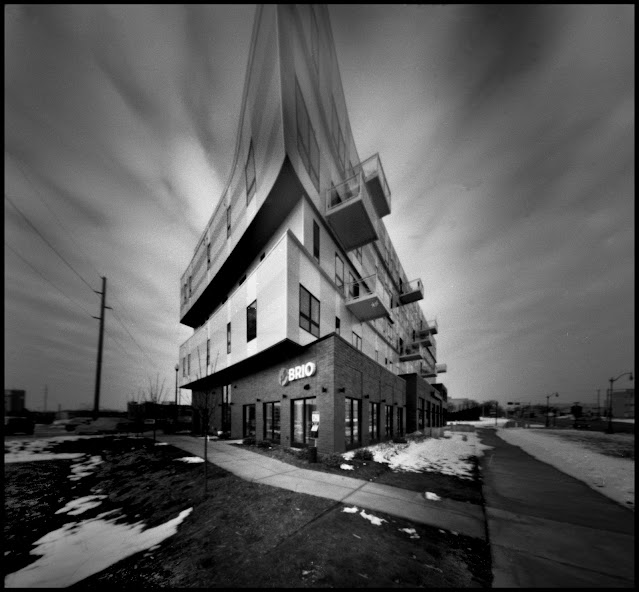 Might have been interesting if the architect of the brutalist City Center Mall would have added a few curves to the entrances. 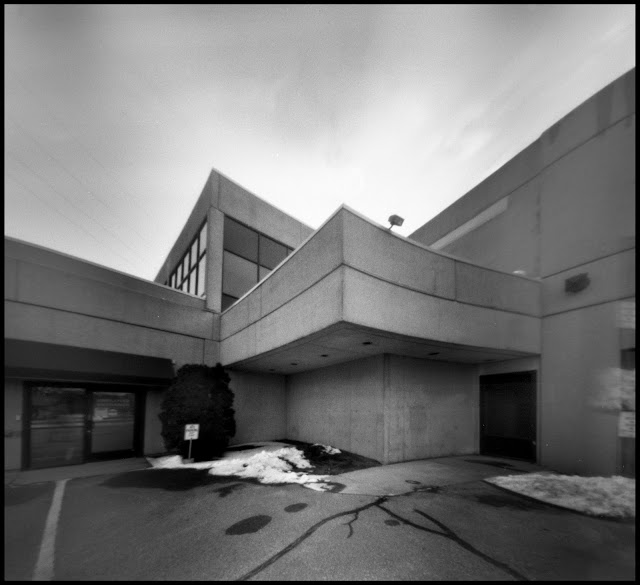 On the last frame it decided to behave for a rear entrance to the mall. 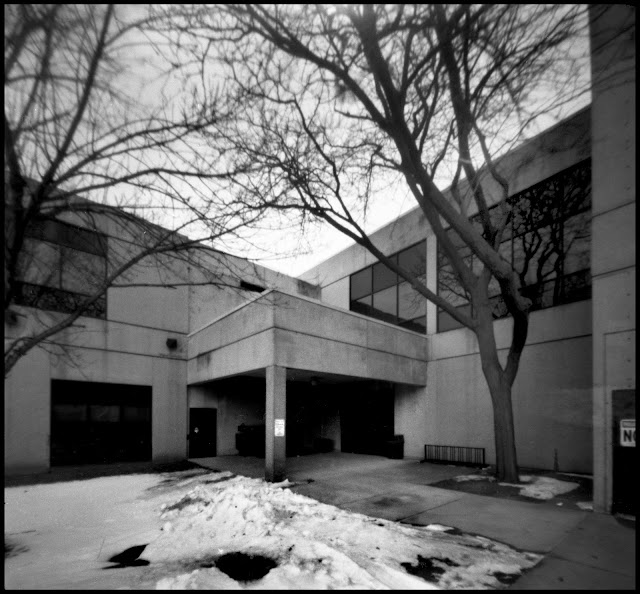 When I was doing this I also had a 45mm camera in my other pocket and would switch as the scene before me called for.

I loaded both rolls of film on the stainless reels without issue and developed them at the same time in Rodinal 1:100. The negatives from the 45 are waiting to be edited.
Posted by Nick Dvoracek at 9:11 AM