In an old camera bag, I found a full roll of 3M #235 opaque photographic tape and a 24 exposure roll of Fujicolor 200. Little Guinness was still sitting on the kitchen table after the adventures in Green Bay so I just reloaded it.

We visited the Grignon Mansion in Kaukauna, built in 1837. Charles Grignon ran a fur trading post out of his home at a natural point where travelers had to portage around the rapids that define the Fox Cities. He was also involved as a translator at the Treaty of the Cedars where Chief Oshkosh ceded the Fox Valley to the United States. 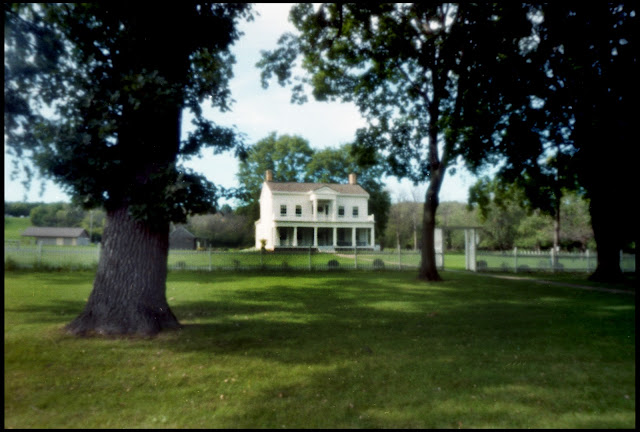 It's not the fanciest architecture and appointments, but compared to what most people lived in, it probably was a mansion. His daughter was a long-time faculty member at Lawrence University, where Andy went to college over a century later. 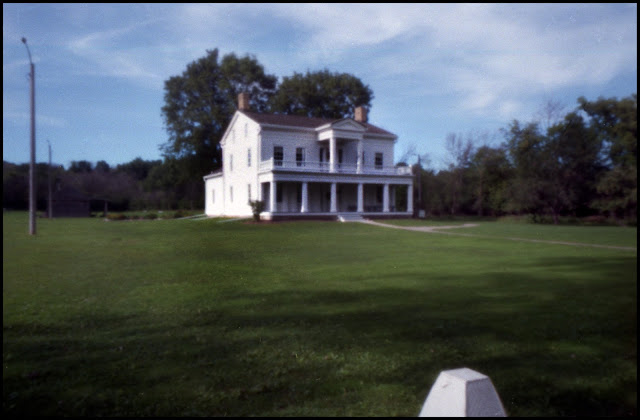 The furthest downstream of the fifteen Fox Cities locks is just across the road, with a sluice powering this quaint little water wheel. 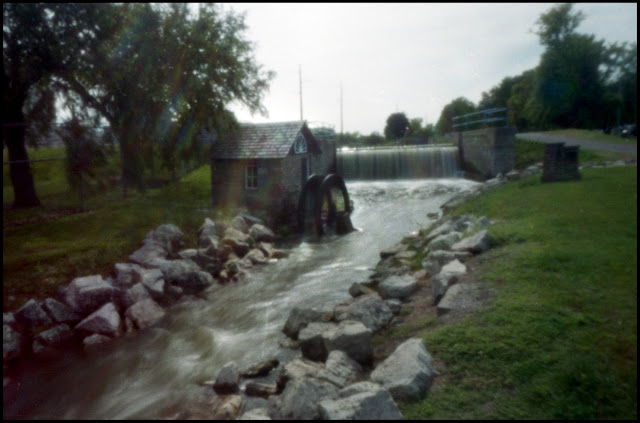 It's very bucolic until you walk a bit to the west and see the giant Thilmany Paper Mill dominating the scene. 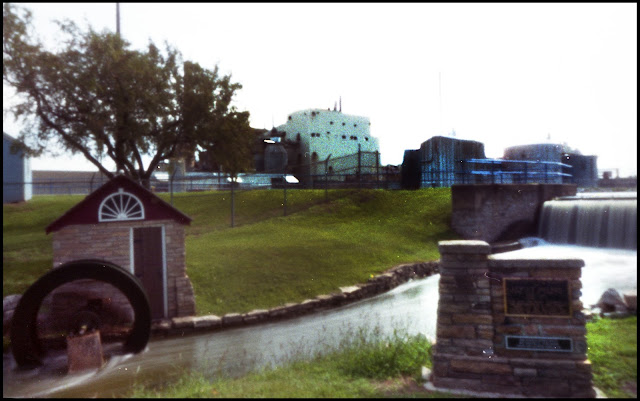 The Kaukanna Public Library, just upstream, is in the renovated former plant. The modern behemoth is on the same island beween the lock channel and the rest of the Fox. 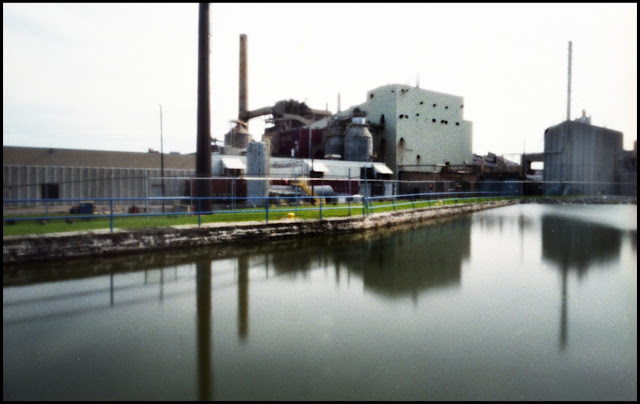 The locks are kind of public parks. You can walk right up to the gates and these wheels that I presume control them. This is the upstream side. 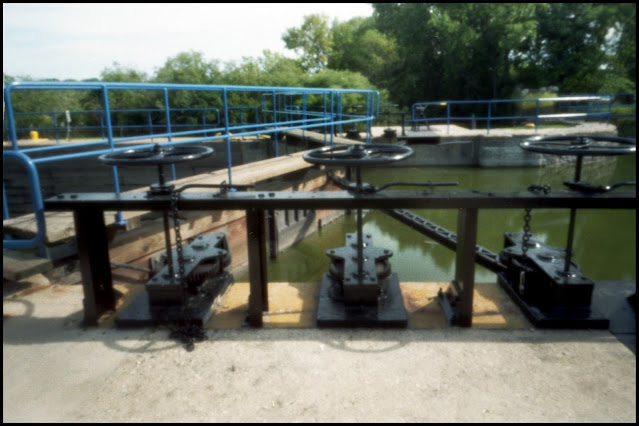 The downstream side. They still operate from early May until mid-September. 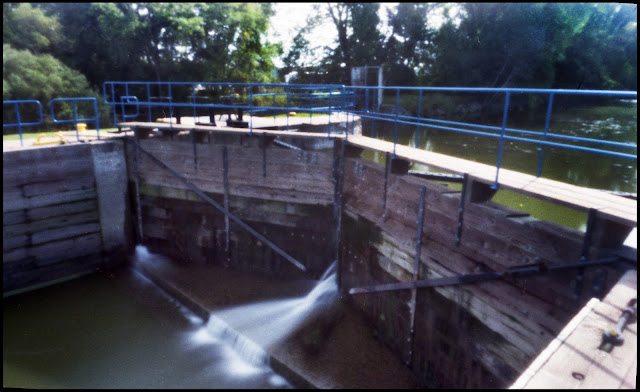 The lock tender's hut. This gives a good scale to the change in river level. There's probably something electric in there that replaced those hand-cranked wheels. 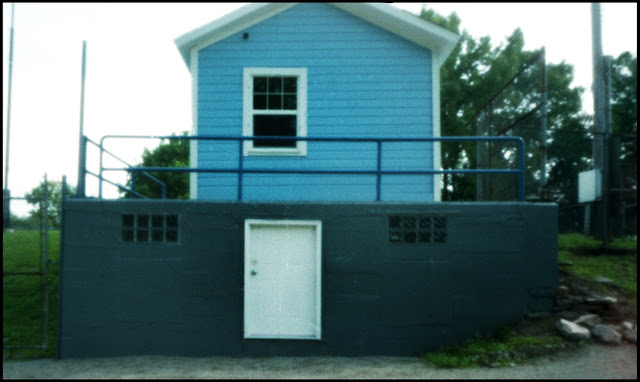 The outlet back to the main channel of the river. 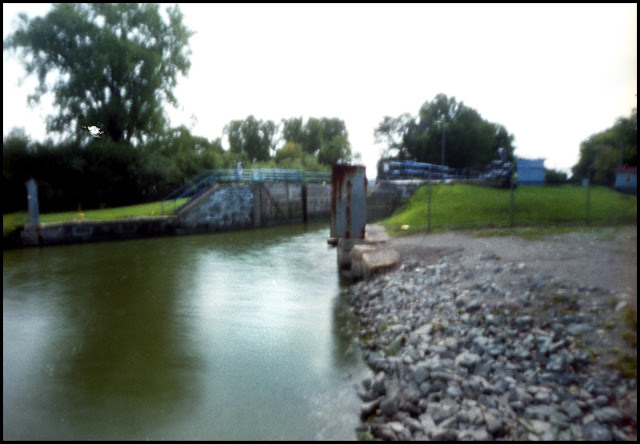 There's a foot path to where the lock channel rejoins the Fox. There are still three more locks before you get to Green Bay. 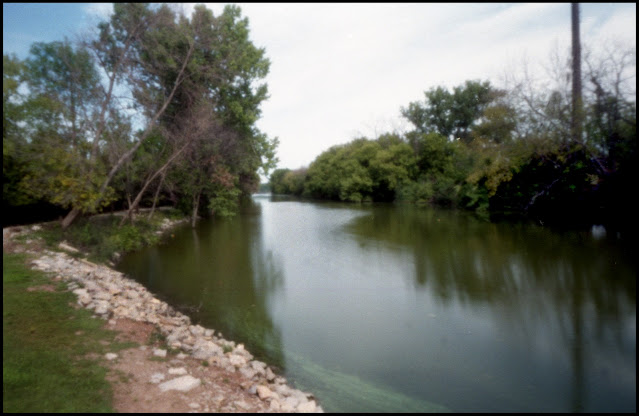 Fish apparently congregate where they flow together. There's a little pier to fish from. 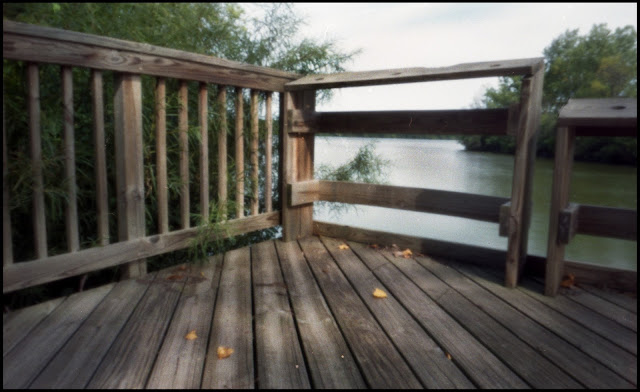 OK, Oshkosh isn't included in the Fox Cities but it is on the river. 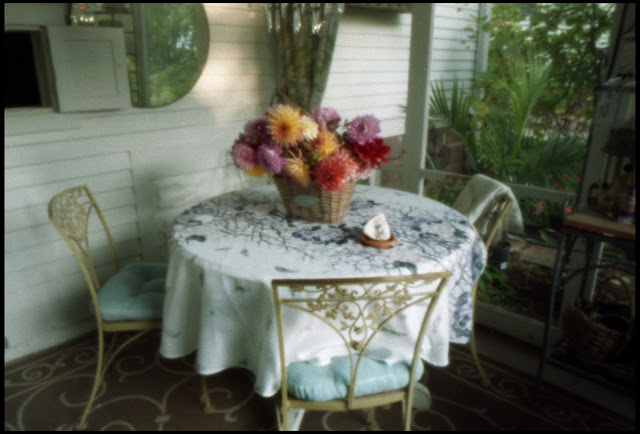 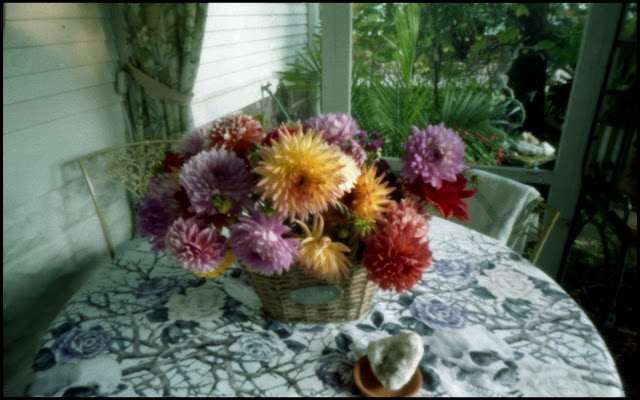 A week later we headed out to the other side of Lake Winnebago. We had to go through the east side of Appleton, so we stopped to snoop around the Halloween display at HomeGoods. 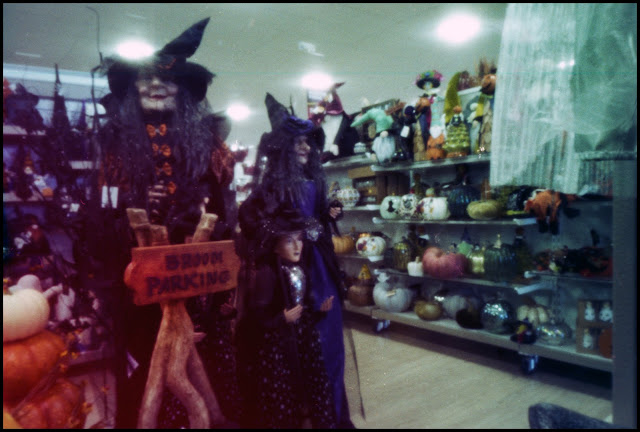 A grinning pearled skull which looks more like Zinjanthropus Boisei than Homo Sapiens. 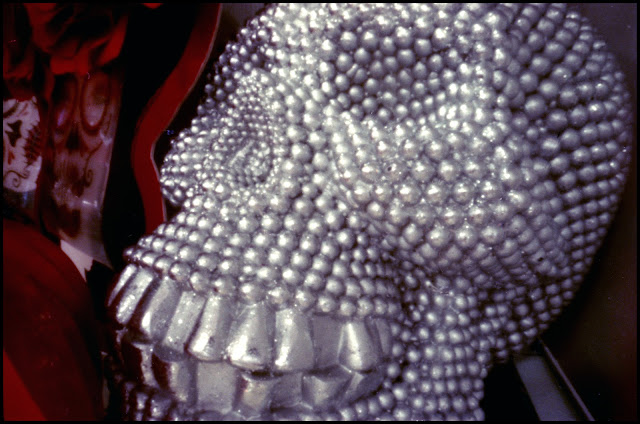 We stopped at the Waverly Beach Club in Menasha for lunch. Big windows and short exposures. 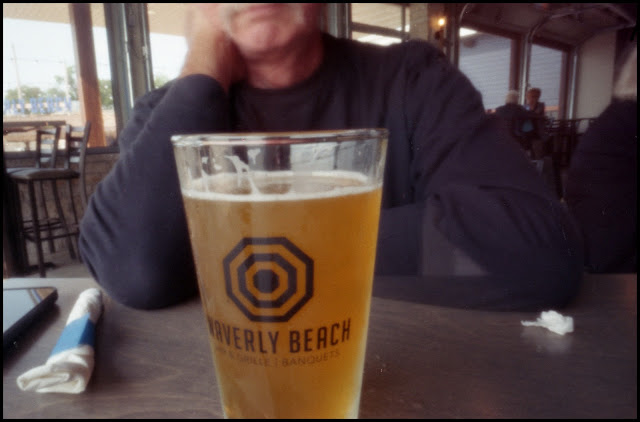 We picked the restaurant for its location. This is the first time I've seen Lake Winnebago from it's northern-most point looking down the long way. I've been around the lake numerous times, but the road never gets closer than a quarter mile from the shore and is usually obscured by buildings and vegetation. 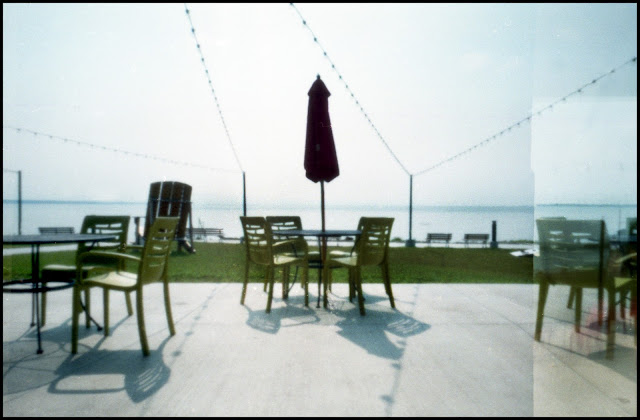 The place is normally a rockin' venue for reasons other than my shaky tripod handling. 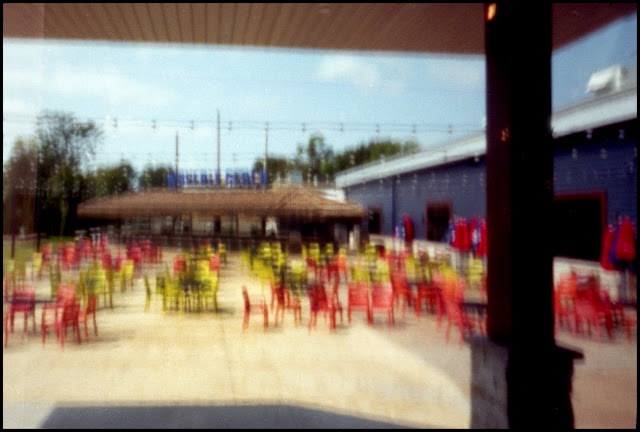 The menu is predictably American bar and grill, but the Coconut Shrimp Salad that Sarah had, and my Bacon and Spinach Salad were quite good. 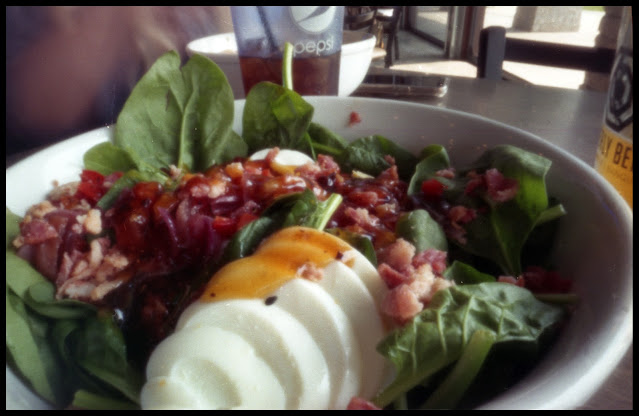 Our destination was Heritage Orchard, famed for their fresh-pressed cider, with copious supplies of many varieties of apples. We got a half-peck of these Honey Crisps. 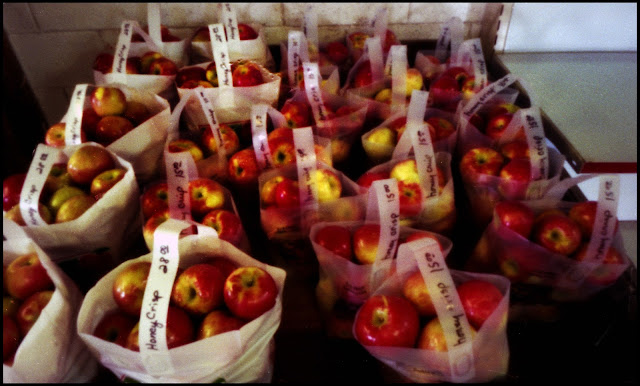 The orchard is located on the Niagara Escarpment that defines the eastern shore of Lake Winnebago, so it's technically part of the Fox River Valley. They have a shop on the second floor with a view of the lake. 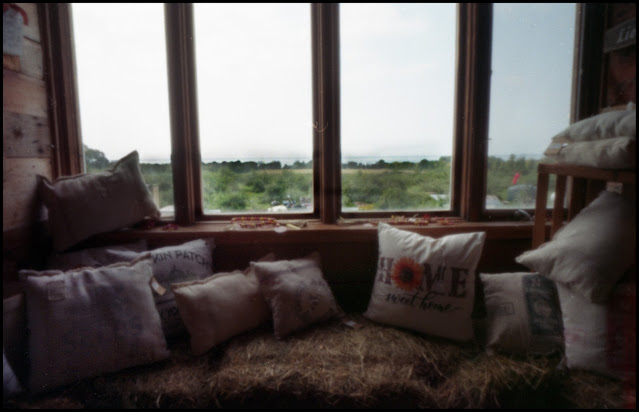 With the camera right up against the window looking over the orchards and the lake. 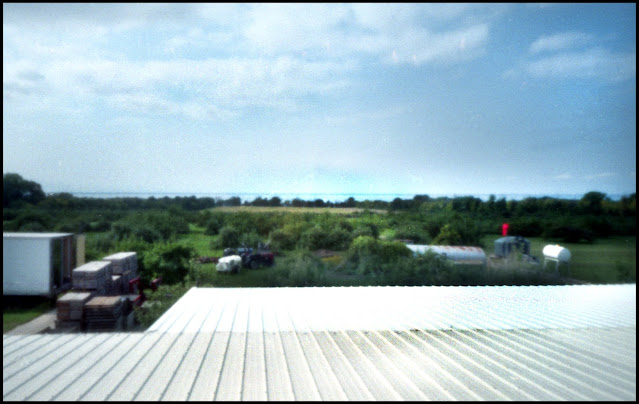 They also have a display case full of delicious fresh apple pastries and cookies. 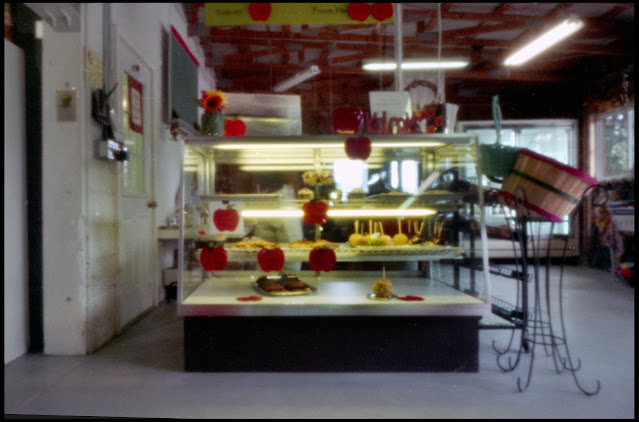 We enjoyed them next to this heavily laden Macintosh tree. 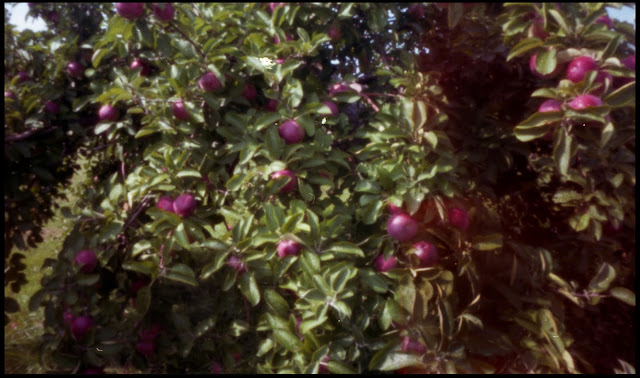 Alas, they were out of cider and weren't pressing again for another two days. We'll have to go back.
Little Guinness has a .17mm hand-drilled pinhole 24mm from a 24x36mm frame.  Fujicolor 200.
Posted by Nick Dvoracek at 9:22 AM