Roadtrip: Neville's turn around the lake

A week after our circumnavigation of Lake Winnebago, we set out to do it again with a slightly different destination. We wanted to go back to Heritage Orchard for some of their fresh-pressed cider and the week before, Polly's Pumpkin Patch in Chilton had not opened for the season. It was Neville's turn in the 35mm Populist rotation.

Again our route was clockwise. We started with lunch between the locks in Appleton under the Oneida Street bridge at Pullman's. 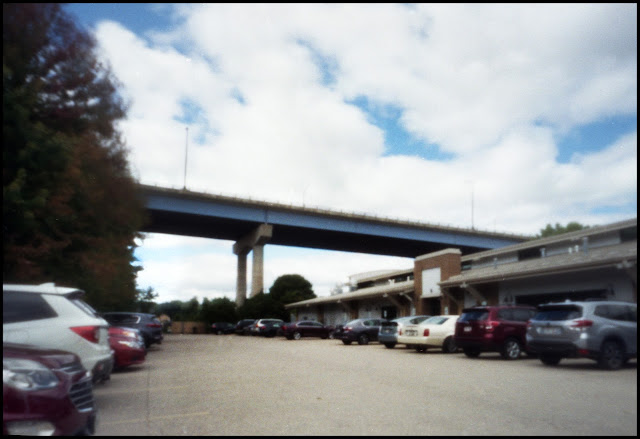 The dining room is all windows with views of the Fox and the bridge soaring overhead. (I think this might be a double exposure.) 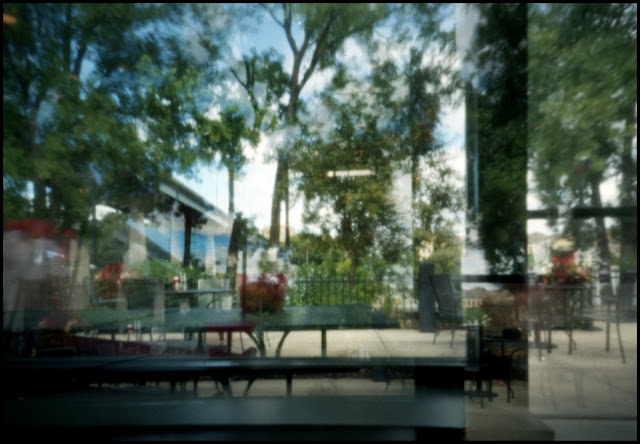 We had that most Wisconsin of appetizers, fried cheese curds. 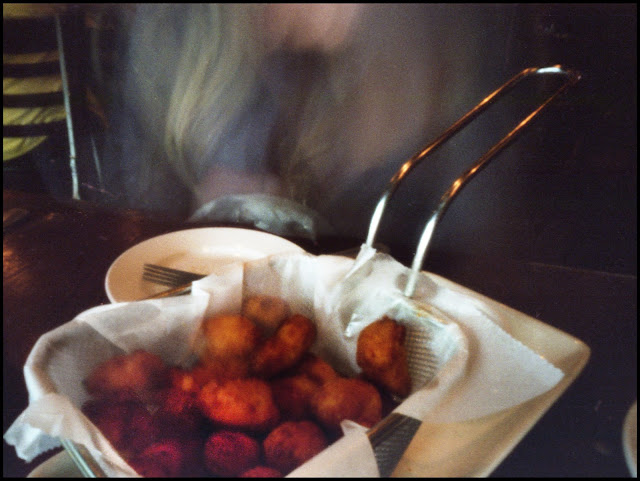 We stopped at Joanne's to get some beaded pins for pinhole camera viewfinders and Velcro patches for my sandals. Over a month before Halloween, the spooky decor was already 40 per cent off. 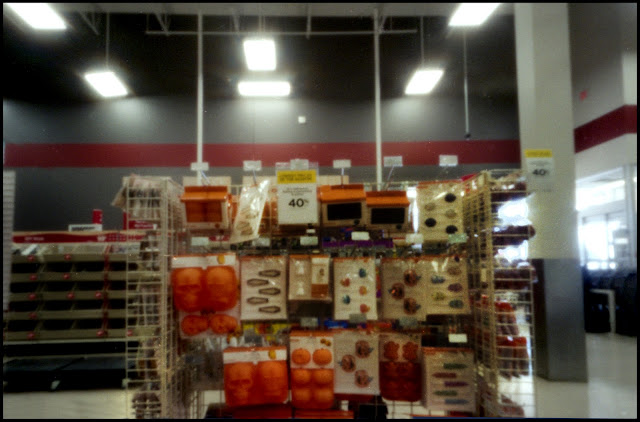 There still seemed to be plenty of selection, including a little questionable anatomy. 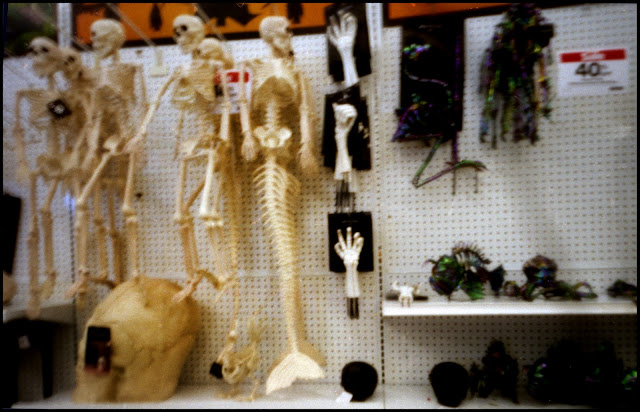 We also stopped at Michael's for glue. Spooky doesn't always have to be black. 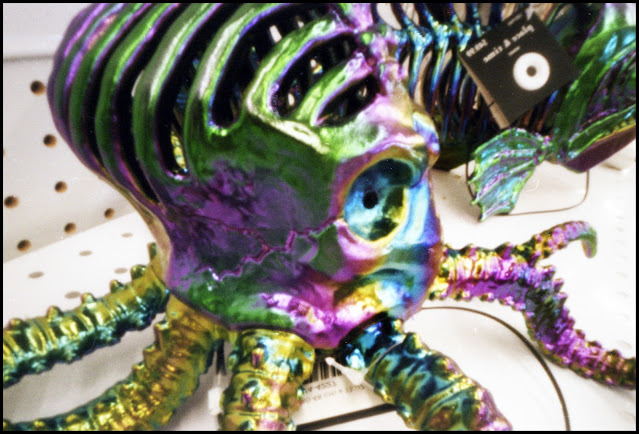 There was also a good collection associated with Día de los Muertos. 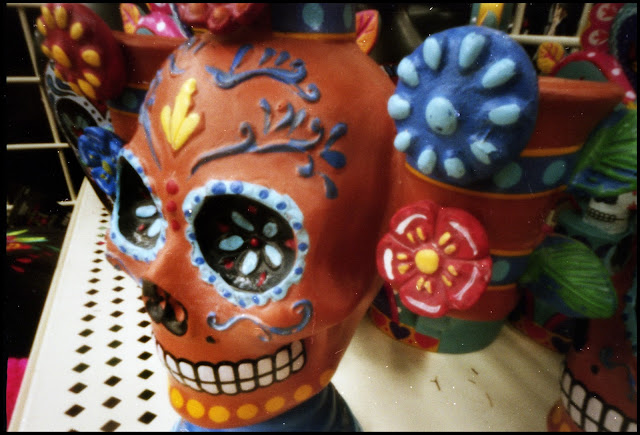 Proceeding to Polly's Pumpkin Patch we percieved a plentiful production of plump pumpkins protected by a picket fence. 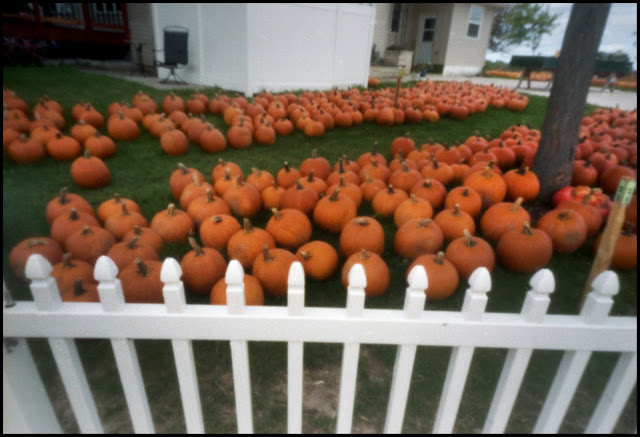 Not only the conventional carvers, but loads of warty and strange varieties 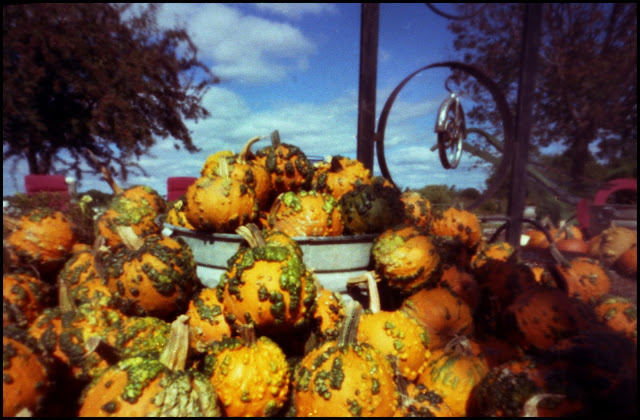 A palette of pigmented pumpkins. 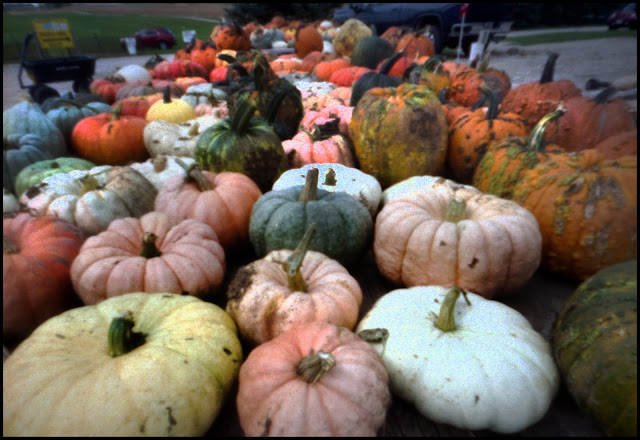 Even the warty ones come in many colors 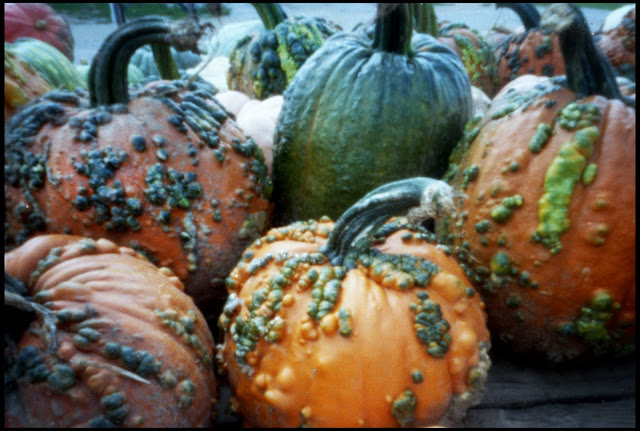 We chose a varied selection, which if you've been following the blog, you might recognize. 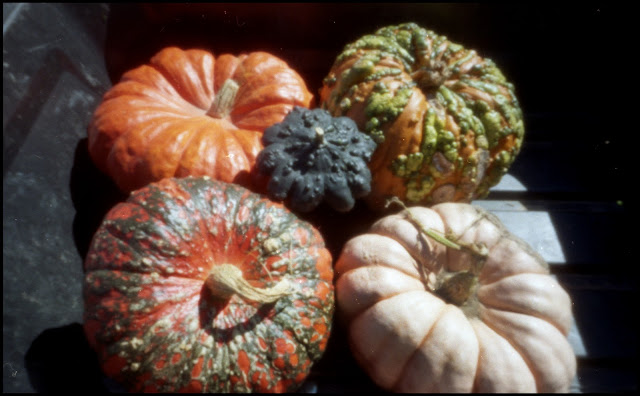 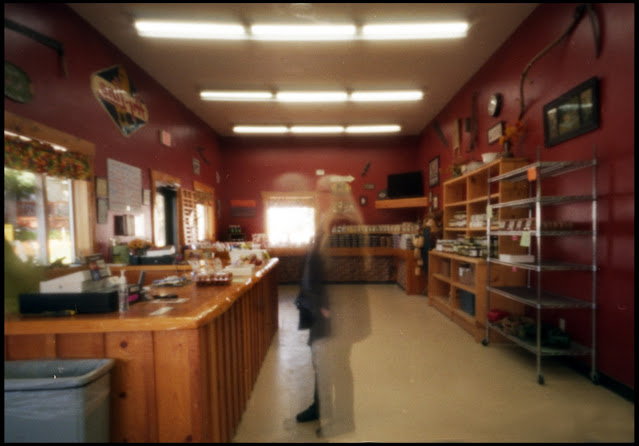 For a place so associated with Halloween, there are very few spooky elements, except for this gent in the corner waiting on two small tables. 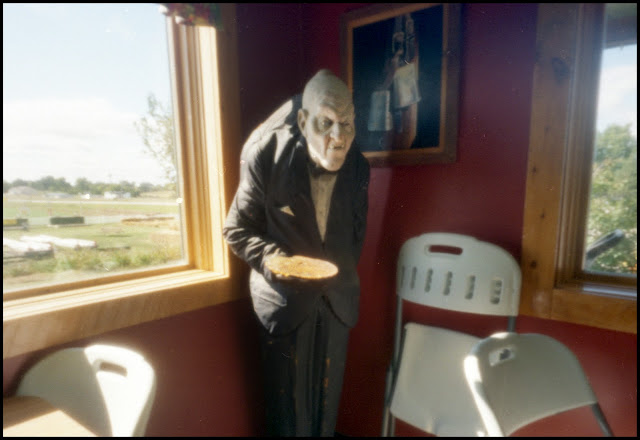 Polly's has several other attractions to make the trip worthwhile. They have a petting zoo with these cooperative little donkeys. 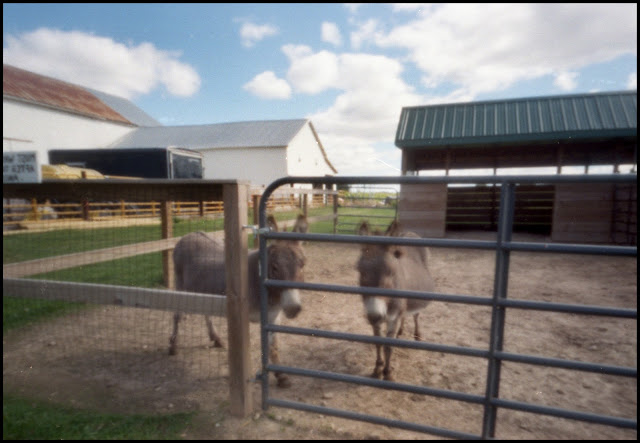 This pony seemed cooperative until I opened the shutter. 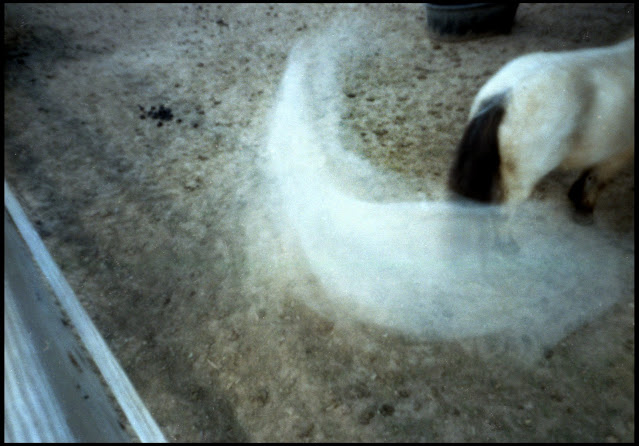 A sleeping pig was even moving too much. 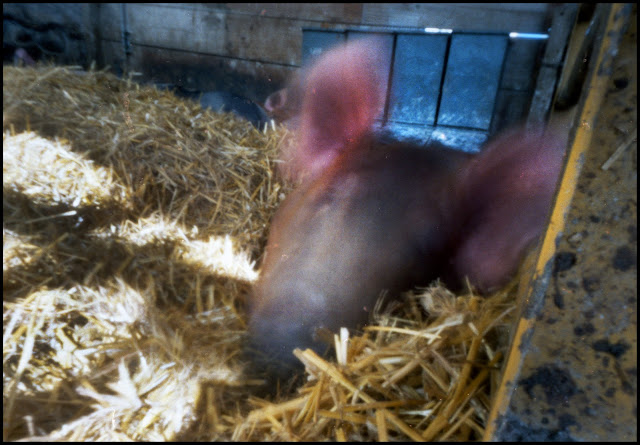 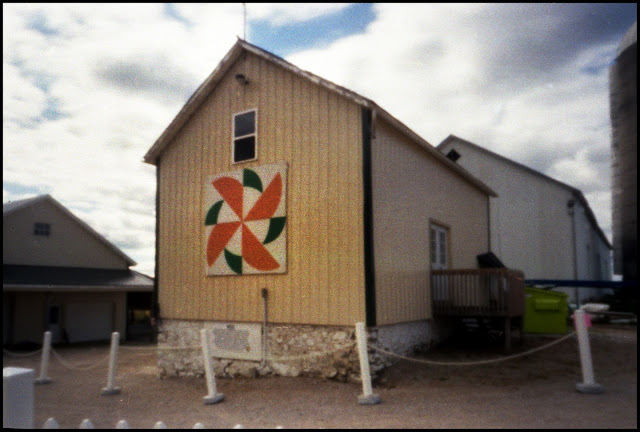 They have a giant slide, available to all ages. We were told how the clerk's 88 year old father had recently gone down it. There were a couple kids having a lot of fun repeatedly using it so I thought it best to not make the attempt. We also decided to skip the 15 acre corn maze which is estimated to take an hour and a half to solve. They give you a map with the solution on a sheet of paper in case you can't find your way out. 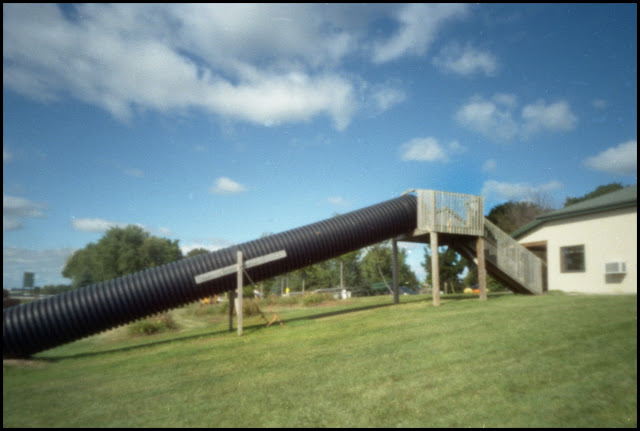 Since a haystack was featured in one of the first photographs ever taken with artistic intent, I was inspired to photograph this pile of bales. 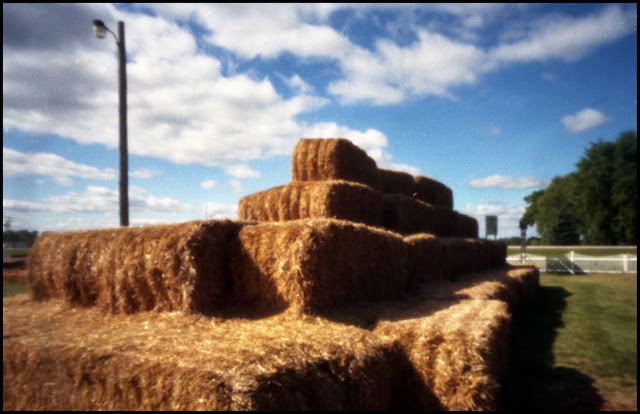 At Heritage orchard, there were plenty of trees still heavily laden with apples. 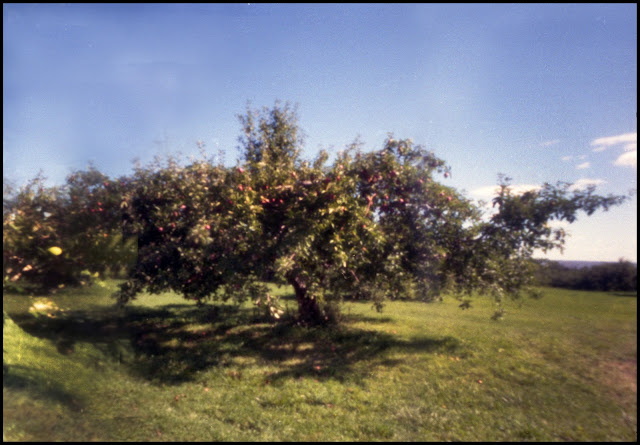 The tree under which we enjoyed our pastries the previous week was picked pretty clean now. 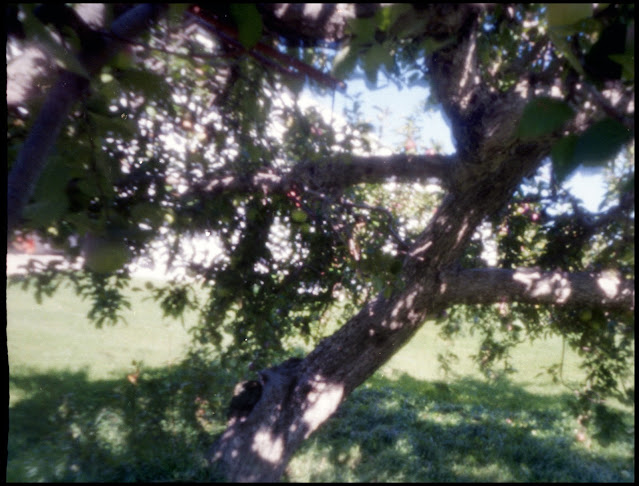 We had decided to stop and have our treats this week in Kiekhaefer Park which is billed as a scenic overlook. It's more an overlook of Highway 151 than anything. Standing atop a picnic table at the top of the hill, you could just barely see Lake Winnebago. 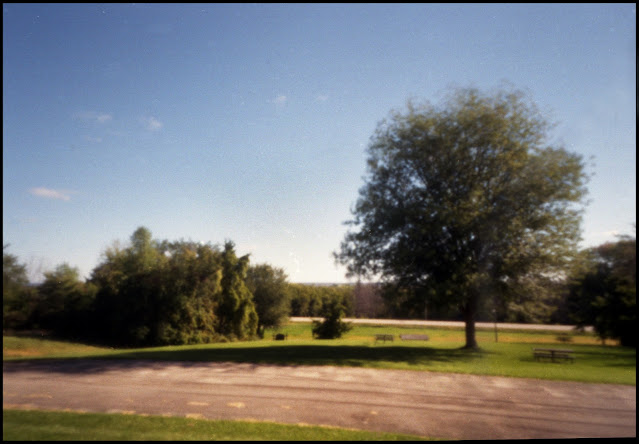 The next weekend was the first session of my workshop at the Trout Museum of Art. I only did one documentary shot of Joanne taking a photograph. 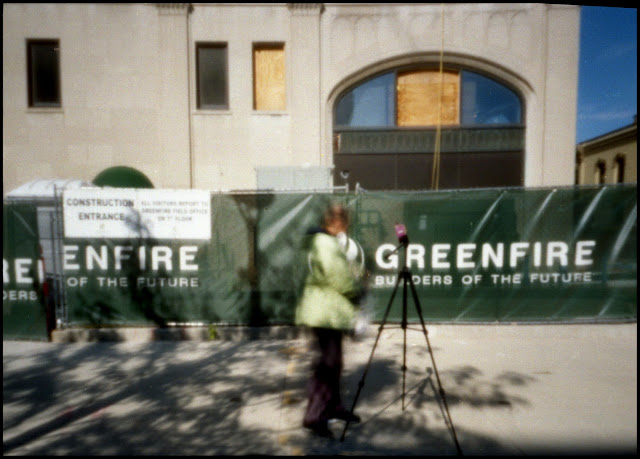 The pumpkins from Polly's are actually gourds with impenetrable exteriors. After getting fooled by the sun trying to take this photograph in black and white, I was more successful with Neville. 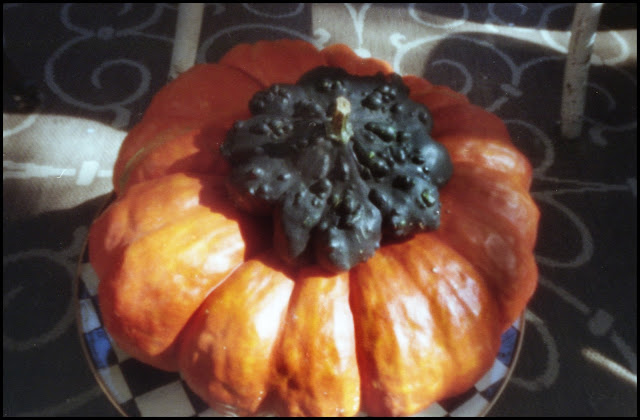 Several weeks later we went out to Fernau's for some carving pumpkins. Last year these tables were almost empty but it looks like the harvest was pretty good this year. 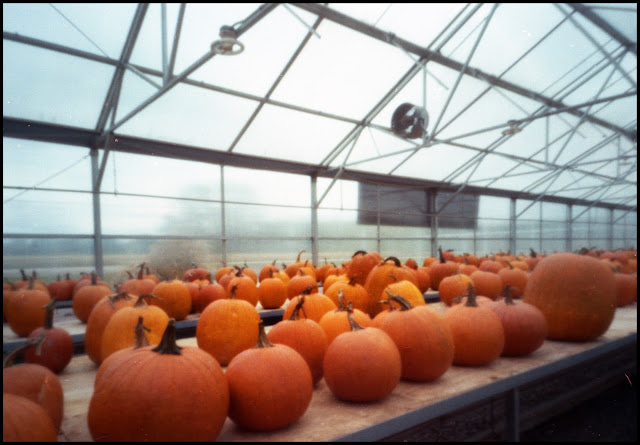 I eventually made a pie out of the apples for an episode of Sarah's Halloween calendar. 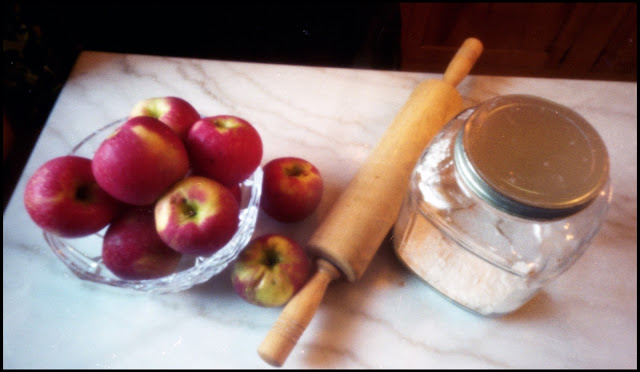 One Sunday morning we made reservations to have brunch after we visited the Rock and Mineral show. It took us much less time to peruse than we had thought and we had some time before our table would be ready. Sarah hadn't seen the new bridge to the Asylum Point lighthouse, it was kind of on our way and the sky was pretty interesting so we stopped to take a look. 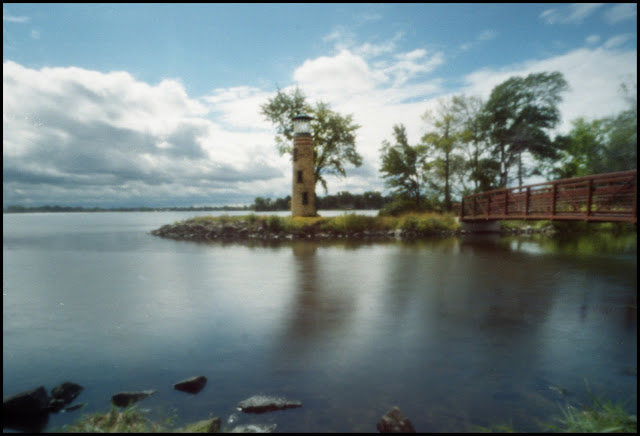 The lighthouse from on the island. 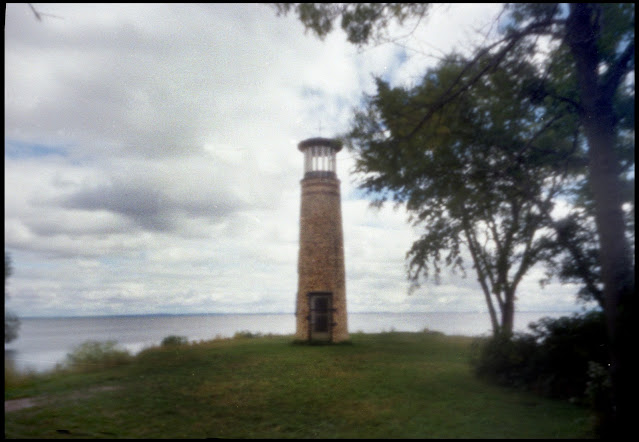 The county maintenance boat Calumet was docked in the channel between the point and the island, the first time I've ever seen it in the water. 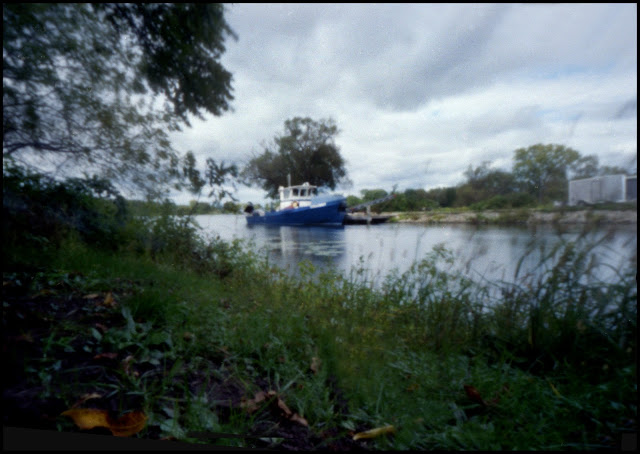