f295 was an international discussion forum begun and administered by Tom Persinger. Originally just about pinhole photography, it expanded into all kinds of alternative methods.  It was active from 2004 until 2015 but it remains on-line. Recently it disappeared from the web for a few days, and that prompted me to decide to reprise some of my favorites here at Pinholica, for backup if no other reason.

We’re in the deep of winter in Wisconsin and I’ve been doing a half hour a day on a trainer stand in the basement so the idea of being out on the road on a warm summer day looks really good to me. I commuted to work on a bicycle for almost 40 years and had been going on long rides several times a week since I retired but this was the first time I went out specifically with the intention of taking pinhole photographs. It was posted on September 18, 2015 under the title: A bike ride on the Wiowash Trail.

Once again, I loaded the Populist and just let it sit there for over a month, so I got disciplined and assigned myself a project. I've been doing lots of riding on the Wiowash trail, so the project goal for today is to shoot the whole roll on my bike ride and drop it off for processing at the end of the trip. 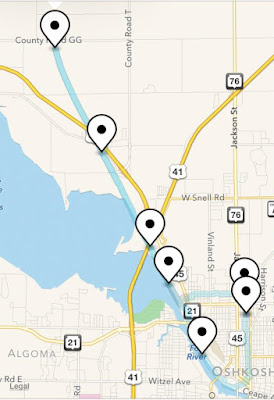 I use this little side drive around Fairacres (it used to be the county fairgrounds), so as to avoid some busy intersections. 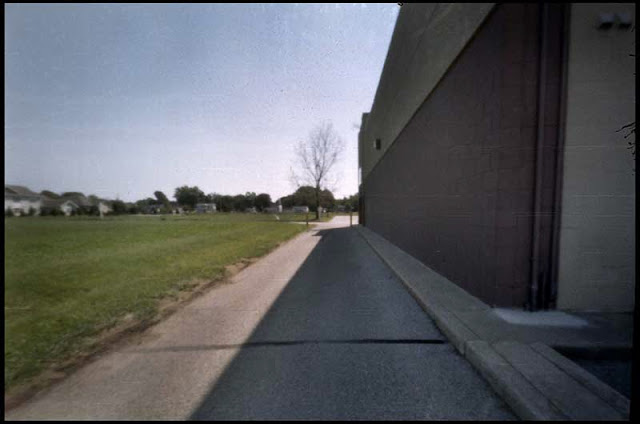 I live about halfway between Lake Winnebago and the Fox River, so I have to go through the city about a mile, half of it on Viola Street. 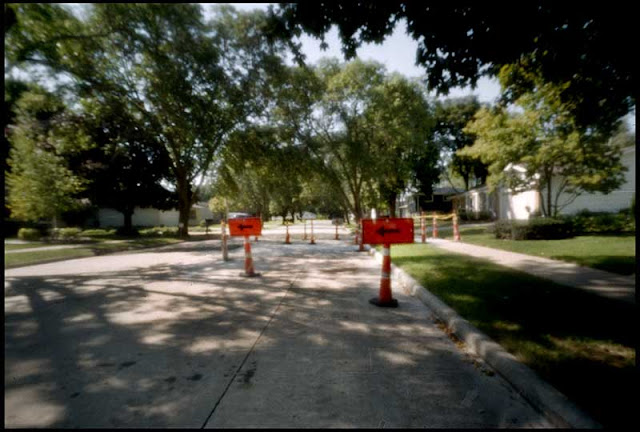 This far north, the last several hundred yards before the Trail go through Riverside Cemetery. This little Hellenistic structure is the last resting place of the Paine family, one of the local lumber baron dynasties. 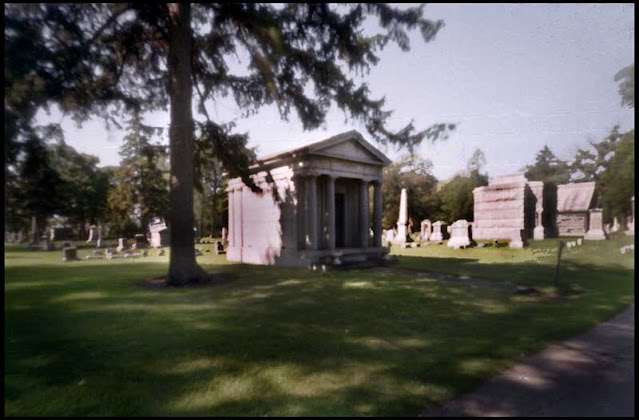 I enter the trail just about where the northern end of the Paine Lumber Company was. Although Europeans had been traipsing up and down the Fox since the 1670's, and the Menomonies had settlements all over the area, this was where the first permanent European settlement in the area was when James Knaggs set up a ferry to cross the river in 1831. In 1847, a float bridge was built nearer Lake Winnebago, and the center of the community moved down there. 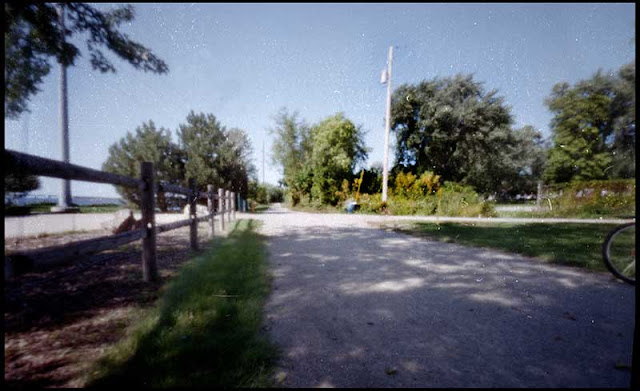 The trail follows the river, and the view to the left is dominated by the westernmost bridge in Oshkosh, the six and a half lane Highway 41 causeway. 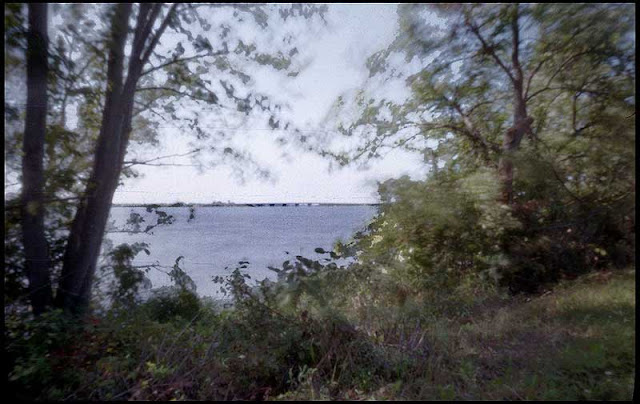 Just before you get to the highway the trail divides, one path going south along the Highway over the causeway, and the way I'm going, northwest toward Larsen, although now I think the trail continues all the way to Shawano. 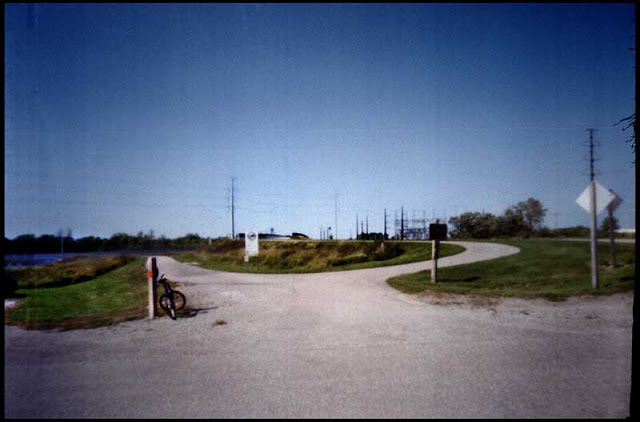 Nice to have a dedicated path over the highway. 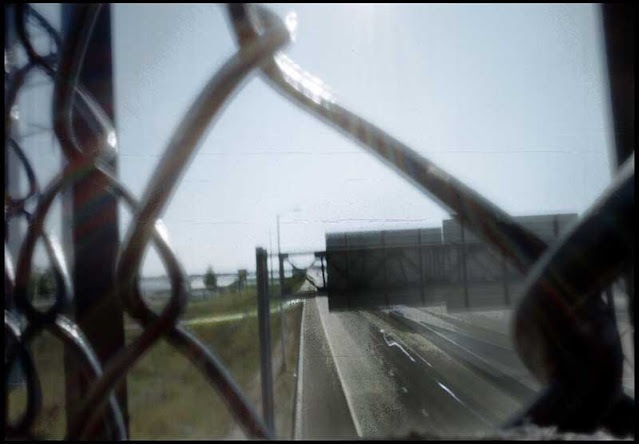 Part of the trail is a causeway over the east end of Lake Butte des Mortes. 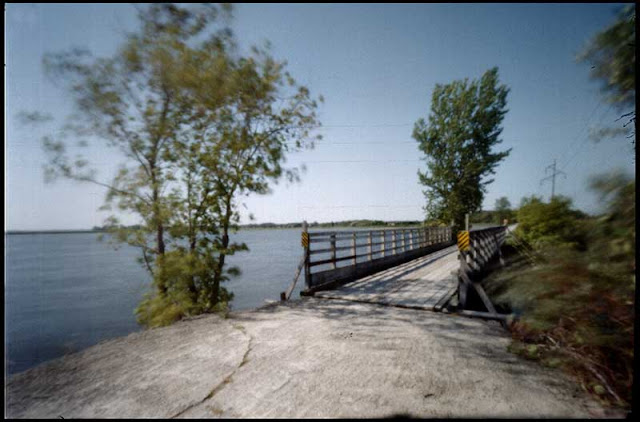 There are occasional benches beside the trail. This is my favorite. It's usually at least part of the way in the shade, and it's made of rough wood, which to me is better for recovering from bike butt than the metal or plastic benches. 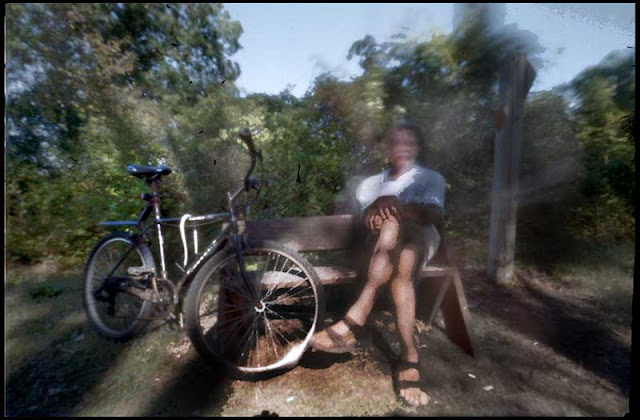 Just past County Highway S, which used to be U.S.110, the trail goes under the new four lane Highway 45 along with County Highway Y. Funny that the turn warning is for the bicycles. 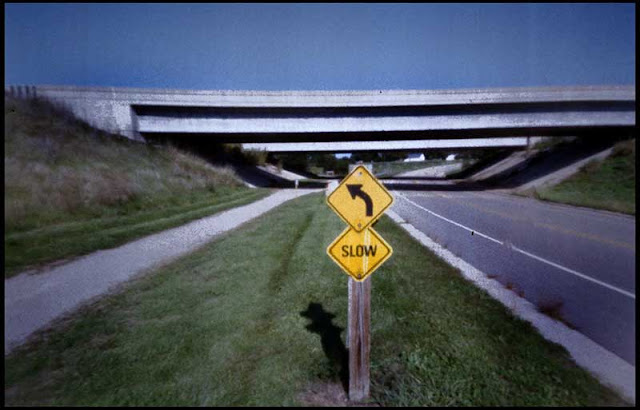 The trail follows an old railroad right of way, so it's pretty straight and the main theme is one point perspective, but quite a bit of it is arched over by the trees with nice dappled light. 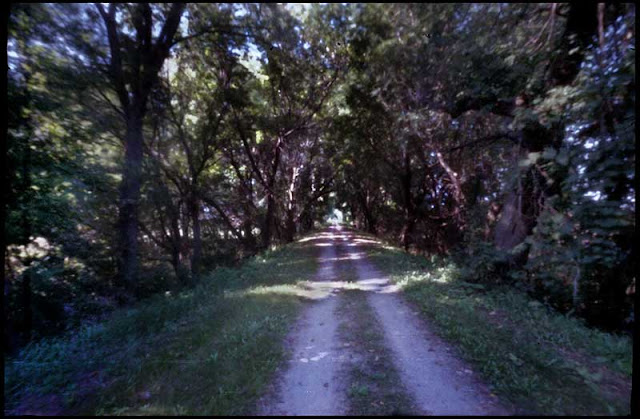 Through occasional gaps are scenes that are probably identical to your mental image of what Wisconsin looks like. 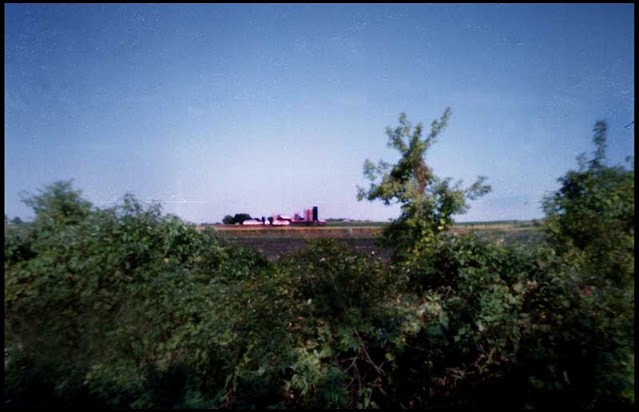 Just short of County Highway GG, the trail crosses Dagget's Creek on this timber bridge. In about 2002, this is where I put the camera for Pinhole Doug's GPS pinhole project. I went back a couple years later and it was gone, but I don't think anyone ever sent one back to Doug. 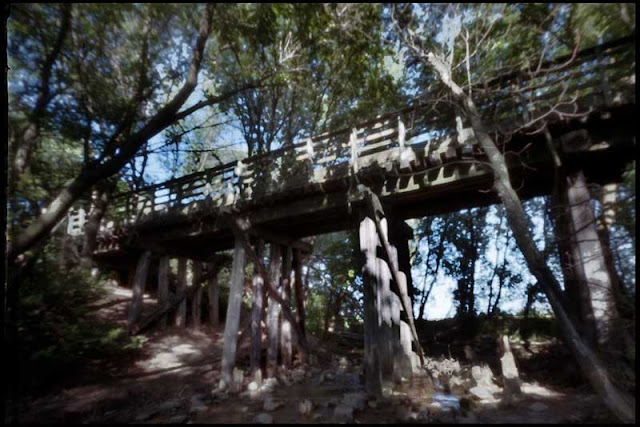 That's as far as I'm going and I've run out of film. Time to turn around and head back to the camera store. 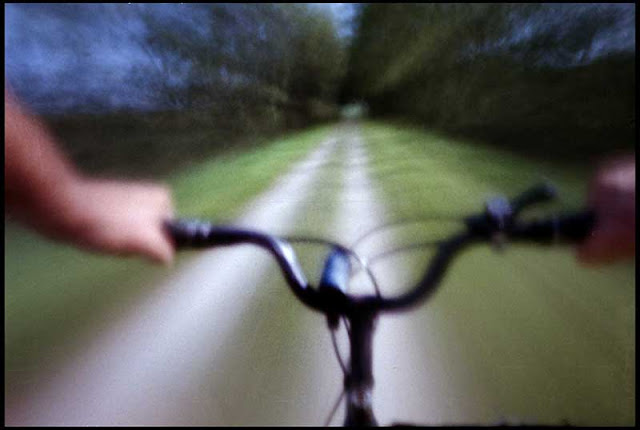 Posted by Nick Dvoracek at 2:54 PM