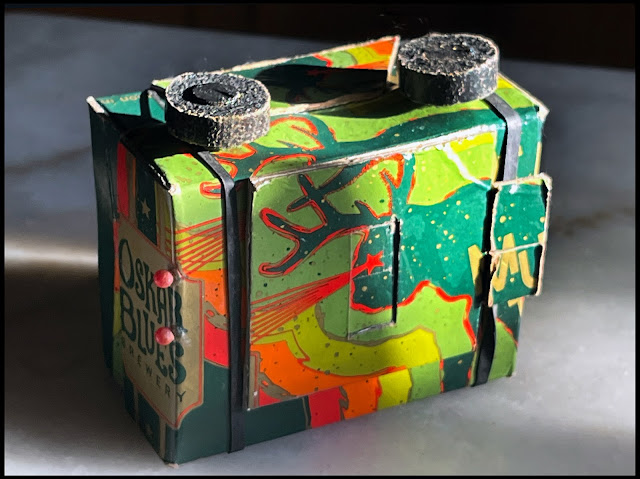 The original Evil Cube was made with just a crude template of the top. It wasn't a complete plan. I measured parts using the take-up reels for the height and the 6cm format and distance to the pinhole. Cutting out flat pieces of matte board and glueing and taping them together. I remember thinking that you wouldn't have room for the reels with a wider angle camera. The Evil Cube Template just followed the original 60mm design. A wider angle camera with a more cubical shape led to the Variable Cuboid Camera System. After making a few of the Evil Cubes, I realized that there is enough room to make a 45mm camera with a full 6x6cm format without making the camera any wider. After a few hours in Inkscape, a new template was ready.
This camera is made out of the carton of a six pack of Mutant X IPA by Oskar Blues Brewery of Longmont, Colorado. Of course it was chosen because of the package design. The beer at a modest 7.0% APV for an IPA avoids some of the unsweetened grapefruit impression of a lot of IPAs. The taking shutter is centered on the eye of the mutant and the name is featured on the rear shutter. The text "...Forward Series of freaked-out IPAs. This bionic IPA..." is the line of the copy that just happened to appear just above the counting shutter. You don't always have a lot of choice with just one six-pack to work with, 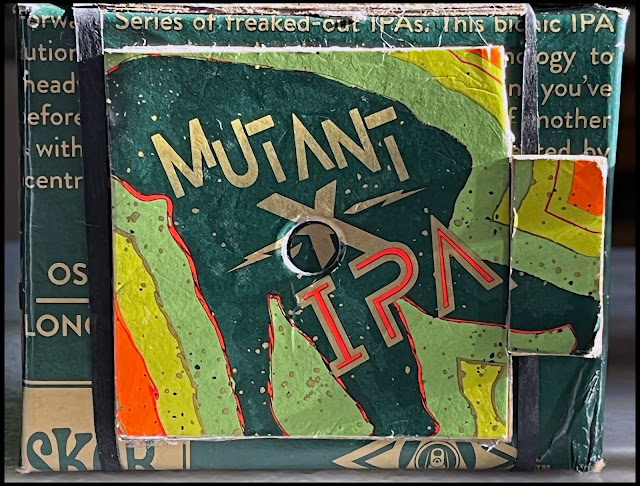 A lot of the impetus behind this is to make the smallest 6x6cm medium format camera possible. Here it is compared to a 45mm 120 Populist and the 60mm Evil Cube it's based on, which makes it seem pretty small. The 35mm Populist is more pocketable, but as a lot of advertisements in the 20th Century would tell you, every 6x6cm frame has over four times more film. 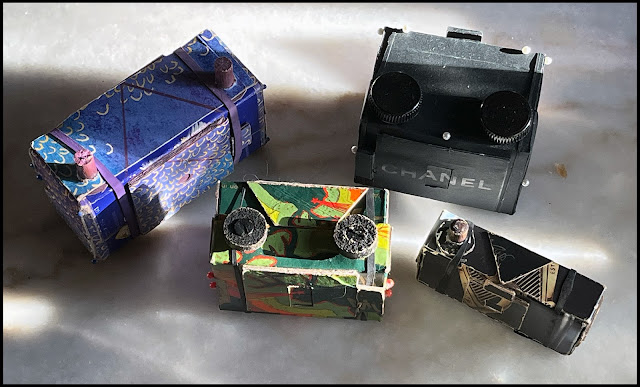 Initially I couldn't get it loaded. The take up reel wanted to twist just a little bit which in several turns is an unstoppable error. I eventually discovered that if it was wound dangerously close to the first frame of film, it would load and advance smoothly. I had a similar experience with Sarah's Spooky Cube once. I think the problem is some slightly shoddy manufacturing, but I won't know for sure until I've made a few of them.
Between the construction of the new middle school, emerald ash borer and just plain old age, it's been a bad couple of years for the great trees in our neighborhood. That inspired me to go photograph the oaks in East Hall field a few blocks away. Originally the site of a hospital which was eventually converted to a dorm and then torn down, it's still owned by the university despite being some distance away from campus. It's been a four square block, underutilized athletic field. The school district recently leased it from the university for 99 years to locate some athletic facilities there for the new middle school a block away. This might be the salvation of the historic Merrill School which the school district intends to tear down to build a track. Whatever, I hope they have the sense not to mess with these trees. 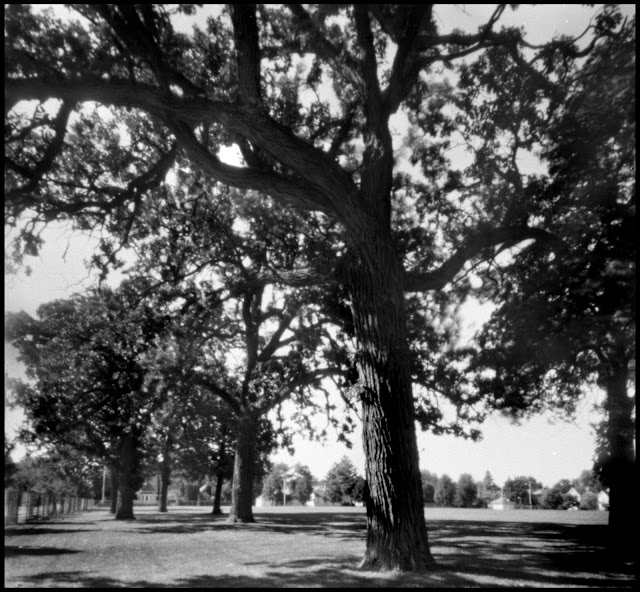 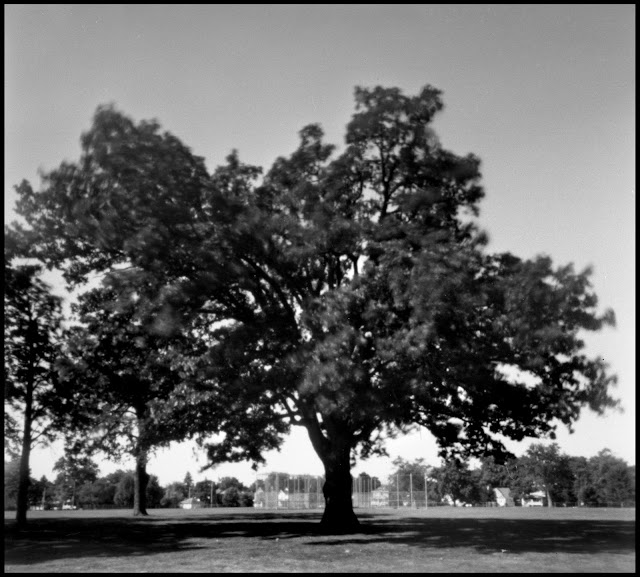 The bell that used to be in the firehouse attached to the old city hall, in front of a contemporary firehouse which now occupies that location. It was cast in 1874, the same year that most of Oshkosh burned down. 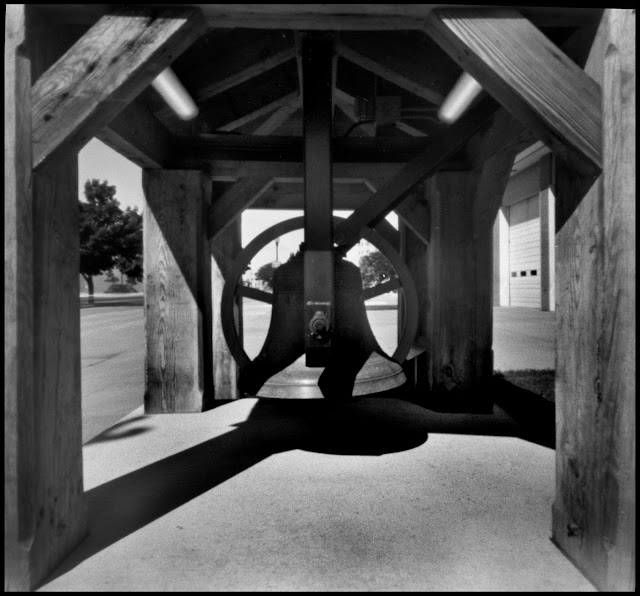 Another to add for my zine Warped if I ever get to it. I usually try to photograph buildings when no one is parked in front of them, but a BMW sports car is more decorative than most. 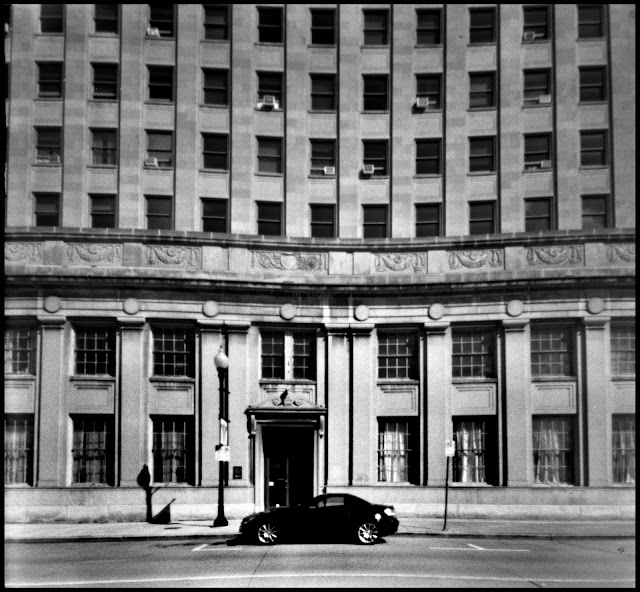 I was on my way to Opera Square to photograph a historic block of buildings on Market Street, but there was a professional photo-shoot with assistants and umbrella reflectors behind the Grand Opera House. Viewing this from the next corner, I noticed this reflective alcove next to me. I had just seen a few images by Lee Friedlander and this kind of reminded me of that. The camera is behind the pole, but you can see me timing it on the left and my bicycle on the right. 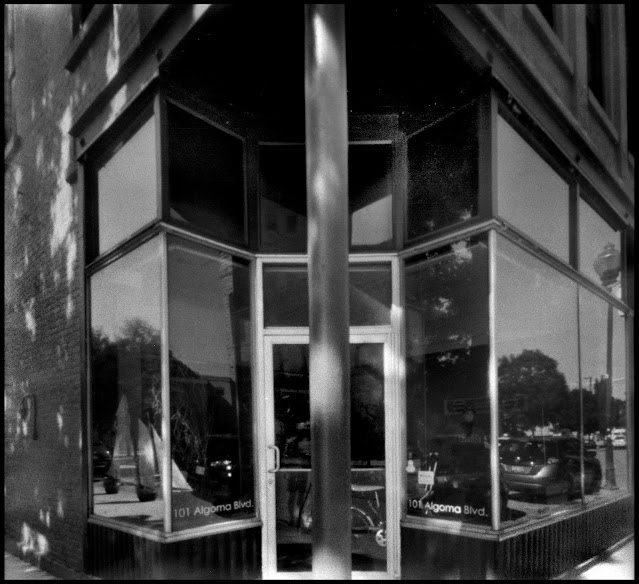 They've built this black Monolith shaped tower a few meters behind the white Miles Kimball building, recently pierced by all these holes. Think the architect is a Kubrick fan? 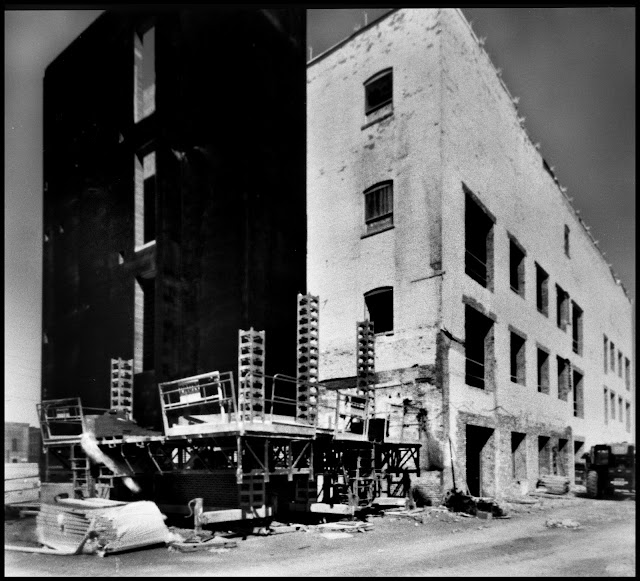 The facade of the restored Sinclair Station on Oregon Street. I used to ride my bicycle to places like this to buy cigarettes for my Dad. The tripod is in the bed of a pickup truck and I made sure to keep moving during the exposure. 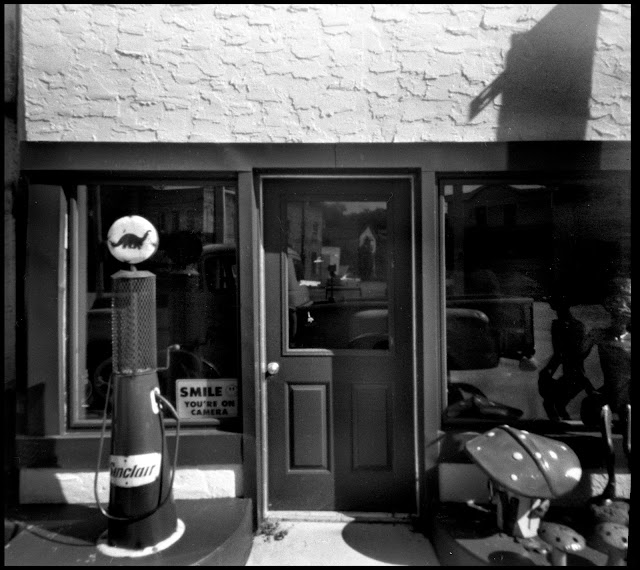 The challenge this month for the Fox Valley Photography Group is macro. This white agate was sitting in front of me on the lanai backlit by the late afternoon sun. Arugula flowers seemed just the right size for 1:1 on a 6x6cm format, and had the right kind of monochrome detail. Not sure I captured the light. 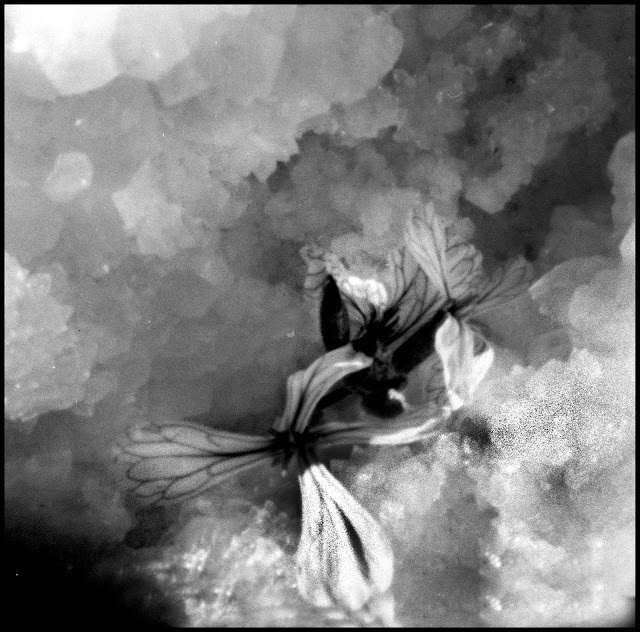 The sun was shining on this little bronze boy which is the handle on a planter. His arms are held out as if holding something. I filled them with parsley which might provide recognizable scale. It took fifteen minutes futzing with it and then the sun went behind the garage about five minutes into a twenty minute exposure. I left it for another hour and a half, but don't think it captured this scene very well either. 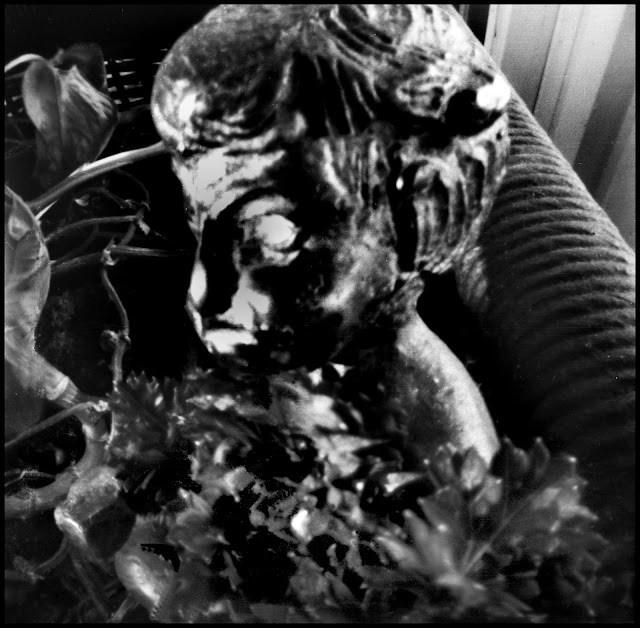 This is the last you'll see of this 72 year-old dude. The next day was my birthday. 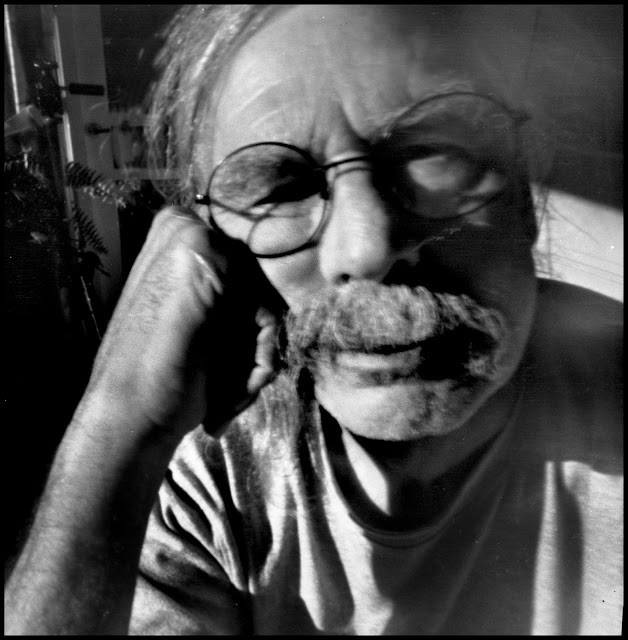